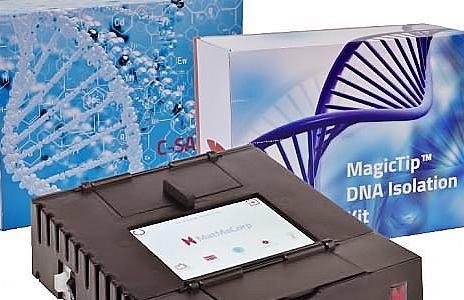 A system that enables veterinary clinics to conduct in-house genetic testing recently was developed by MatMaCorp. The company’s platform is designed to analyze genetic information carried in deoxyribonucleic acid — DNA — in animals, or ribonucleic acid — RNA — in some pathogens. The analysis enables users to identify the genetic character of any living organism.

The system has taken a complex process and simplified it so non-laboratory personnel and those without technical training can conduct genetic testing in-house or onsite, MatMaCorp said. The low-throughput device can process eight tissue samples at a time for veterinary clinics or farms. Beta-testing machines are in place at several locations. Users can conduct analyses of genes that not only indicate certain characteristics of an animal, but also aid in detection of genetic traits that may lead to disease in the animals.

The device may be used for testing food quality and animal health. It already is being used to test for the presence of the A2 form of beta-casein — a milk protein produced by dairy cattle that’s considered to be better tolerated by people with digestive issues. The device also is being used to test for genes in beef cattle that indicate animal susceptibility to congestive heart failure.

The company has customized tests for the U.S. Department of Agriculture. A farmer in Kansas had previously contacted the USDA requesting a test for Booroola, a fecundity marker in sheep that indicates which ewes will produce more than two lambs. Samples are typically sent to New Zealand for testing, resulting in a long wait time. The MatMaCorp team required just five days to develop the biochemical test and provide it to the scientist who requested it. The results matched output from validating tests from the facility in New Zealand, according to MatMaCorp.

MatMaCorp is now beta-testing in the field for Porcine Reproductive and Respiratory Syndrome in swine. Normally farmers must send blood samples for testing and then wait 48 hours for results. Animals remain at-risk for infection during the waiting period. MatMaCorp’s device produces a result in two hours and testing can be done at the farm. That’s a paradigm shift for the industry, according to MatMaCorp.

Meghan Connelly recently joined Vita Plus as a dairy nutritionist and technical-services specialist. Connelly is starting in Madison, Wisconsi…