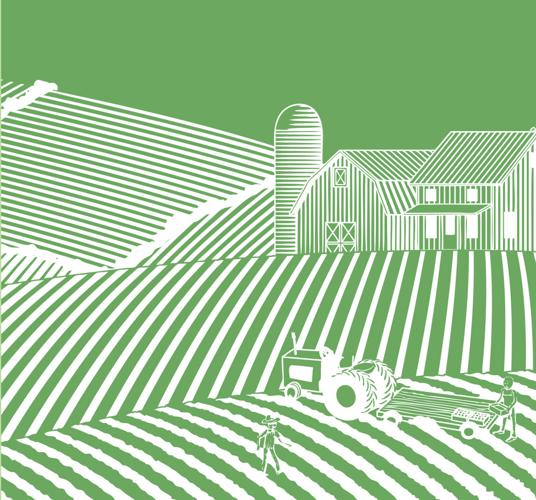 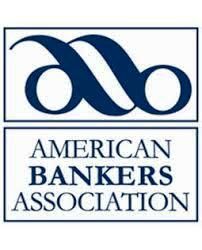 The biggest concern facing agricultural lenders going into 2023 is interest-rate volatility, according to the 2022 Agricultural Lender Survey report produced jointly by the American Bankers Association and the Federal Agricultural Mortgage Corporation – more commonly known as Farmer Mac. Almost half of respondents ranked interest-rate volatility among their top two concerns, an increase of 35.5 percentage points from the previous year. While increasing rates have helped bolster bank net-interest margins, a combination of increased funding costs, fears of weakening loan demand and strong competition is expected to cut into increasing yields, according to the report released at the American Bankers Association’s Agricultural Bankers Conference in Omaha, Nebraska. 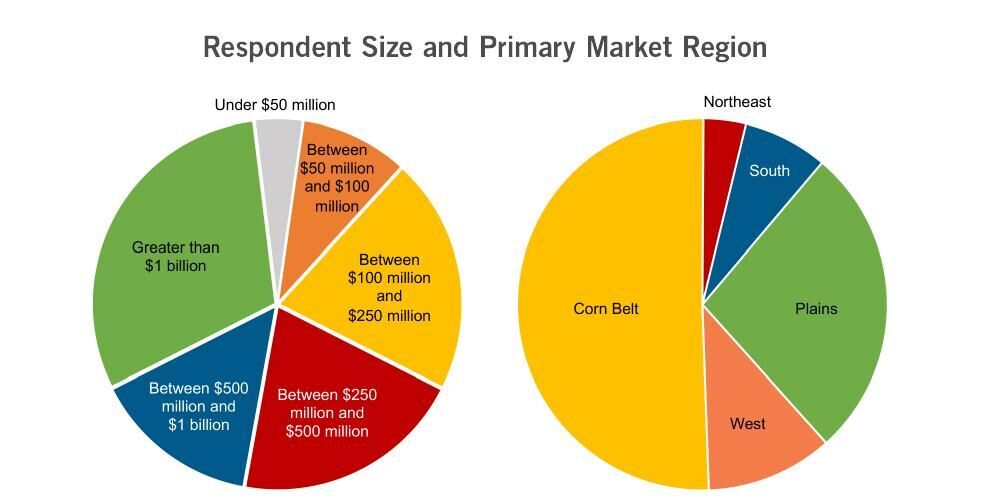 “Given the Fed’s clear signal that it expects to continue raising rates until inflation is contained, it’s fitting that ag lenders cited interest-rate volatility as their No. 1 concern,” said Sayee Srinivasan, (American Bankers Association) chief economist. “Lenders expect that both short-term and long-term rates will continue to rise in the coming year, reflecting market expectations that rates could rise by another 100 to 150 basis points by the end of the first quarter of 2023.”

In response to the survey, lenders cited inflationary pressure as their No. 1 concern for producers. Liquidity and farm income, two of the top-two concerns in prior years, were the second- and third-greatest concerns this year, respectively. Lenders remain comparatively more concerned about weather and less concerned about total leverage than in prior survey years, according to the report. Recession risk, a new category this year, was lenders’ fifth-biggest ranked concern for producers. By comparison, lenders ranked “a slowing economic recovery” near the bottom of their list of concerns for producers in 2021. 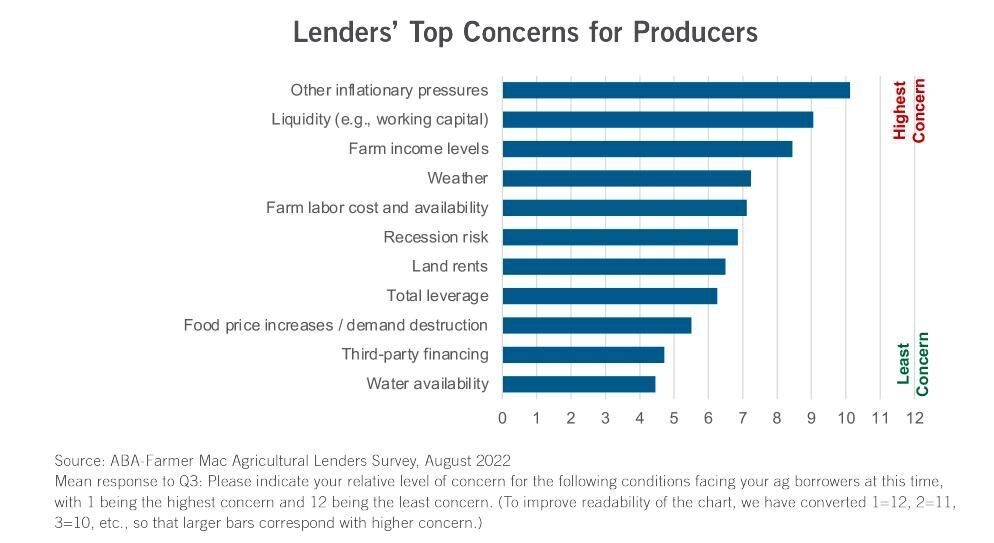 “Many of America’s farmers and ranchers experienced a strong recovery in 2021 and 2022, driven by higher commodity prices and robust sales,” said Jackson Takach, chief economist at Farmer Mac. “Looking ahead, ag lenders are keeping a close eye on expenses as feed, fertilizer, fuel and other input costs remain elevated.”

Respondent level of concern for all categories of commodities decreased this year. Lenders reported the greatest levels of concern for the dairy, fruits and nuts, and beef-cattle sectors. But concern for each sector showed improvement as compared to 2021 levels. Lender concerns notably declined for grains during the year. 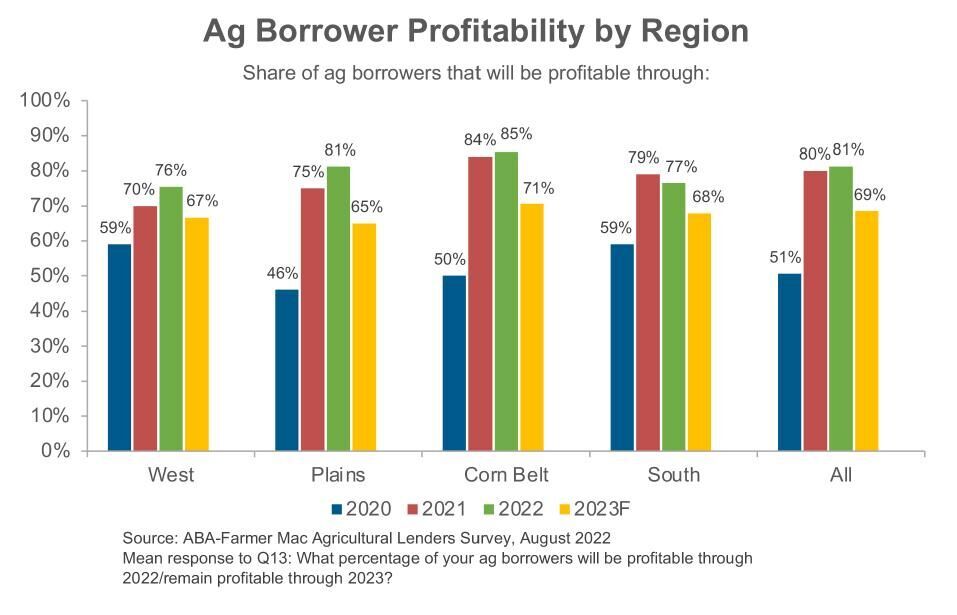 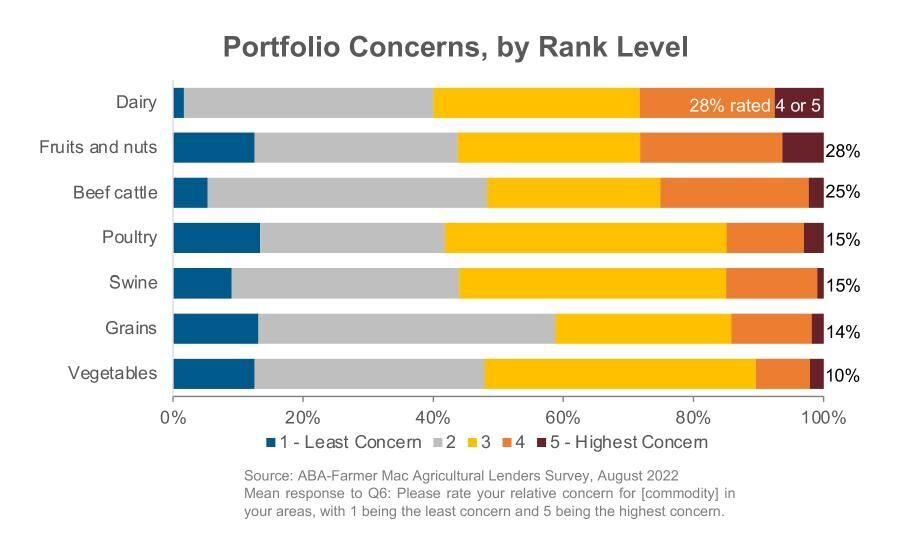 Approximately four out of five ag lenders reported increasing land values in 2022, consistent with results from the 2021 survey. But a growing percentage of lenders expected land values to slow down or decline. Cash rents were also reported increased in 2022, with 72.2 percent of lenders reporting increased rents in their market areas and 43.2 percent of respondents expecting cash rents to continue to increase in the next 12 months, potentially adding to inflationary pressures for producers.

“Farmland, a significant store of wealth for millions of farm families, continued to appreciate in 2022,” Takach said. “Most ag lenders anticipate the growth of land values slowing in the coming year, likely in response to higher interest rates and potentially higher farm expenses.” 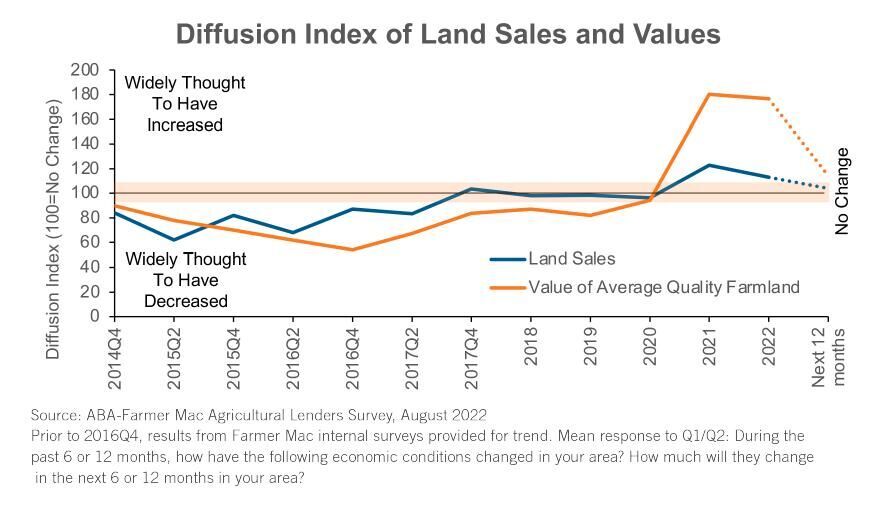 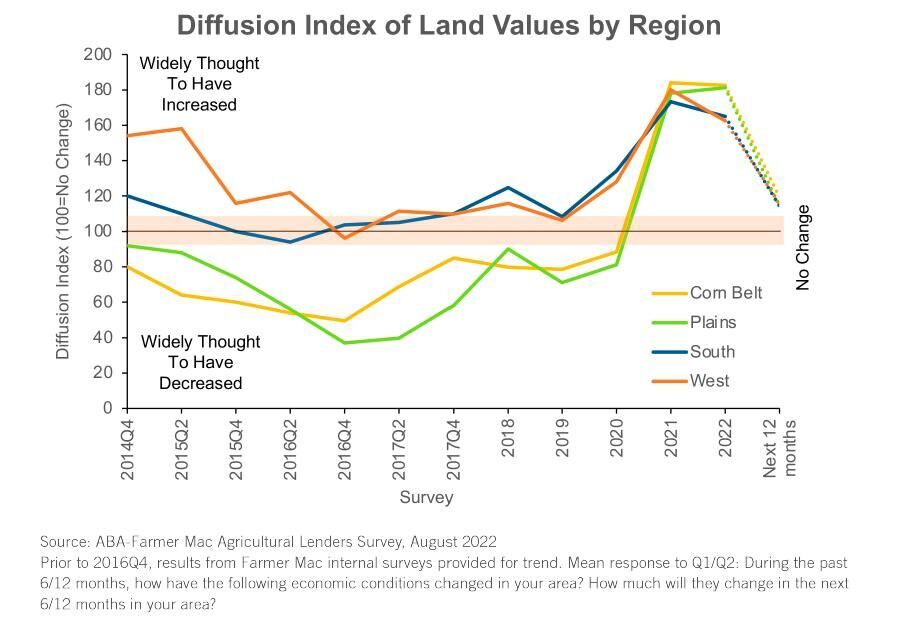 Lenders’ biggest concerns after interest-rate volatility are lender competition and weak ag-loan demand, according to the report. About one in three respondents ranked competition among their top-two concerns, a decrease of 17 percentage points from past year. More than three-quarters of respondents ranked the Farm Credit System as their No. 1 competitor for agricultural loans. Concern about credit quality and ag-loan deterioration, which was the No. 1 concern in 2020, remained the fourth-greatest concern facing lenders in 2022.

According to the report, demand for loans secured by farmland increased in 2022 at about the same pace as in 2021. Demand for agricultural-production loans also grew in 2022, reversing the downward trend reported in the previous year. But demand for ag-production loans remains less than the 2016-2018 survey average. Respondents anticipate that loan demand for both categories will continue to increase during the next 12 months.

Lenders also reported an average agricultural-loan-application approval rate for new loans of 86 percent in the 12 months leading up to August 2022. On average they expect the approval rate for renewal requests to be 92.2 percent in the following 12 months, likely due to strong conditions in the agricultural economy and a decline in lending activity due to increased rates.

Survey respondents across all regions continued to report reduced ag-loan delinquencies and charge-off rates in 2022. Lenders in the South and West states anticipate credit quality will deteriorate next year, while lenders in the Corn Belt and Plains regions expect quality to remain fairly stable during the next 12 months.

“Credit quality was excellent in 2021 and 2022, so it is to be expected that lenders would anticipate some deterioration in the coming year as the potential for a downturn grows,” Srinivasan said. “Ag lenders have deep familiarity with both the ag sector and its cycles, and will continue to work with their borrowers and support farmers and ranchers as credit quality normalizes to historical levels.”

The annual American Bankers Association and Farmer Mac Agricultural Lender Survey report is a joint effort to provide a look at the agricultural economy and market forces from the unique perspective of ag lenders. More than 300 agricultural lenders completed the survey in August 2022. The responses came from a diverse set of institutions, ranging from those with less than $50 million in assets to those with more than $1 billion in assets. Regionally the responses were somewhat concentrated in the Cornbelt and Plains.

The American Bankers Association is the voice of the nation’s $23.7 trillion banking industry, which is composed of small, regional and large banks that together employ more than 2 million people, safeguard $19.6 trillion in deposits and extend $11.8 trillion in loans. Visit www.aba.com for more information.

I officiated at a funeral once for a man named Alfred Dummer who was a plumber.

Everyone on the family farm pitches in and does their part, including four-legged friends. That prompted the American Farm Bureau Federation t…

I don’t play the lottery and don’t frequent casinos, but if I were a betting man I’d lay odds that sometime in the next few years I will be in…