I recently heard a term used to describe our ability to rediscover family and friends, and resume activities we couldn’t do a year ago.

Analog summer is used to describe our new normal as we move out of the pandemic and back to enjoying life. After more than a year where the digital world of computer meetings and video streaming dominated our lives, we’re back to good old-fashioned analog.

I like the idea because the sound from those old albums seems deeper and richer. When I was 17 years old, I blew several weeks of wages on a used Harman Kardon receiver, turntable and cassette deck with massive speakers. I needed my booming bass.

The analog idea is we’re turning back the clock to simpler times – when our lives were not dominated as much by digital devices but by human interaction and natural experiences that don’t come from liquid-crystal displays.

Summer is the season of family vacations, which is difficult when one lives on a dairy farm. But my parents would always try to take at least a few days of rest and relaxation. For a few years we traveled with my grandparents who had friends with a cabin on Witters Lake near Wautoma, Wisconsin.

The days were spent fishing, reading and relaxing. At night there would be card games and endless entertainment as we watched with amusement the competitive nature of my grandparents – who did not like to lose.

My brother Kevin and I gathered clams and even took home a couple of painted turtles that became pets in a child swimming pool we kept on the deck. They even wintered in our bathtub.

A few times we also ventured north to stay at a cabin on No Mans Lake, a 230-acre lake in northern Vilas County, Wisconsin. It was so north that the road went into the Upper Peninsula of Michigan before dipping back into Wisconsin. It was remote and quiet with excellent walleye fishing. The mosquitoes would eat us alive after dark, but hearing my first loon is something I will never forget.

Outside the cabin next to Witters Lake was a ring and hook game. A metal ring about 3 inches across was suspended from a rope tied to a tree branch. The object of the game was to swing the rope so the ring would land on a metal hook on a post. I’d spend hours trying to master that simple game – to see how many times it would take to land the ring. Grandpa told me the record was three.

The second year we came back to the cabin I ran from the car to see if the ring was still there. Much to my delight it was still standing. I unhooked it, stood in the spot I had figured out the previous year and gave it a gentle push. I landed the hook on the first try – and had a difficult time convincing everyone else I had actually done it.

That was in 1977 – the last year we took a cabin vacation. Kevin graduated the next year and the year after that my grandmother died. Life moved on.

But I’ll always remember fishing tales with my father and grandfather, and those wild card games. That’s what an analog summer should be – spending time with family and friends, and building that non-digital memory bank.

Recently I was fortunate to be “behind the scenes” as a guest while I listened to Tenzin Botsford tell the story of how he and his wife, Stace…

I have a theory I can’t prove. The further mankind removes him- or herself from our agrarian past and the work it involved in close proximity … 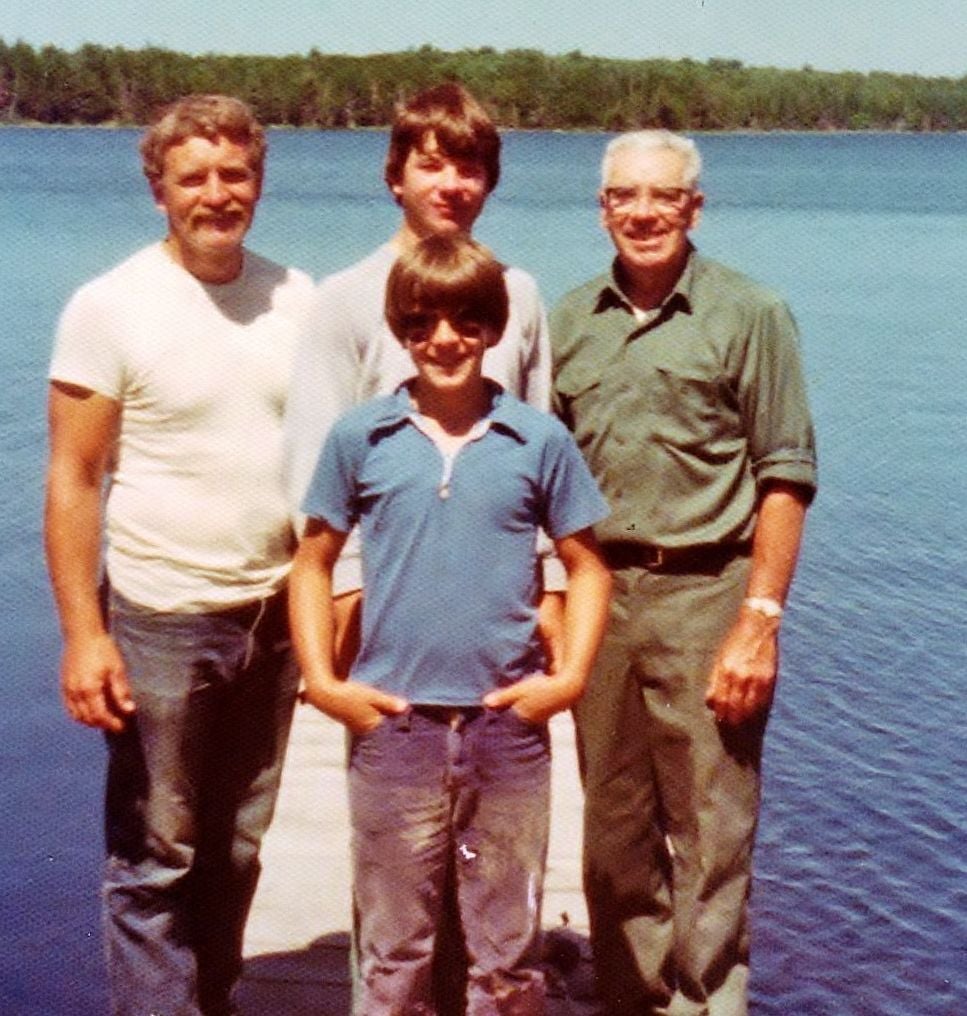 Chris Hardie, front and center, is shown with his father, Bob, brother Kevin and grandfather Keith during a family vacation in the middle-1970s on the dock of No Mans Lake in Vilas County, Wisconsin.