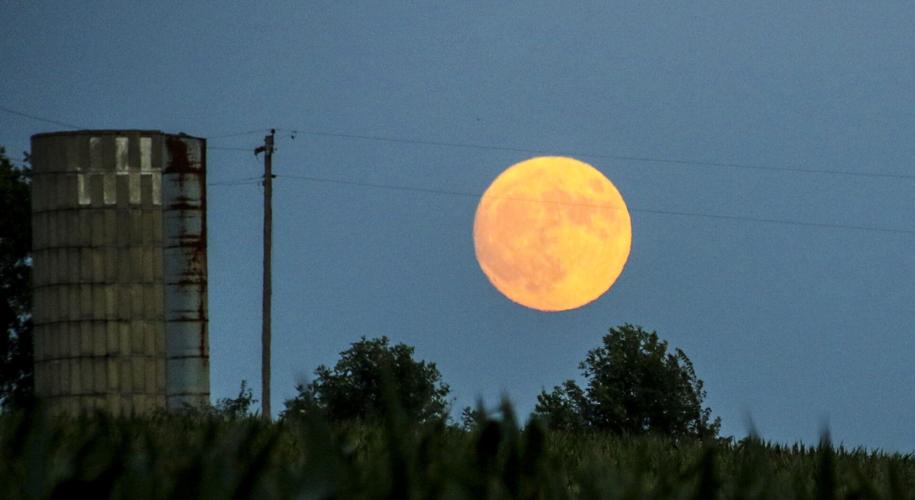 The Buck Moon shines the night of July 13 in eastern Iowa County, Wisconsin. 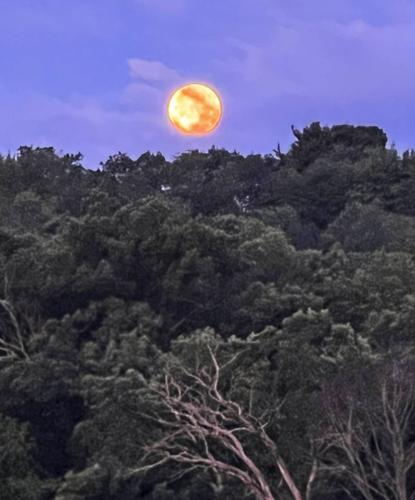 The Buck Moon sets July 14 on the western horizon of Chris Hardie’s farm. 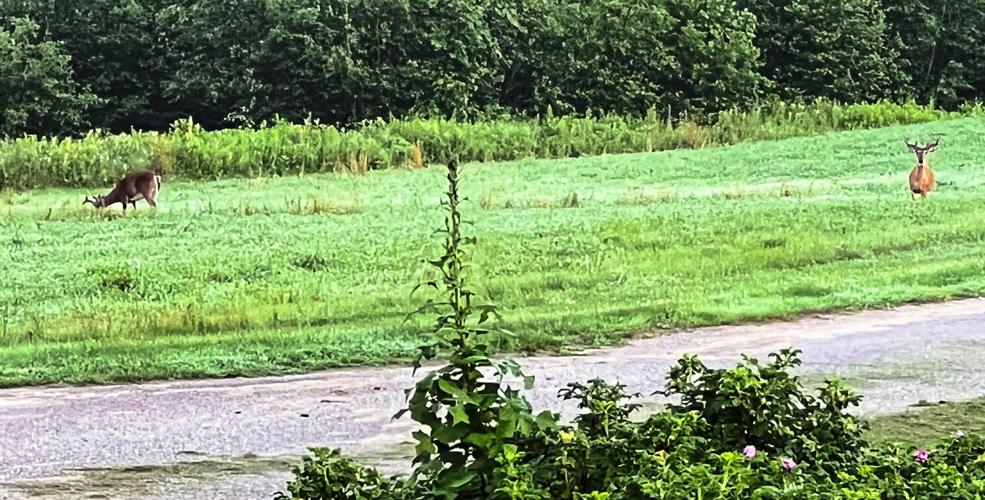 Two bucks appear in the field near Chris Hardie’s house a few minutes after the Buck Moon sets.

A beautiful thing about life are the serendipitous moments that brighten our journey.

That thought was not on my mind as I was bending down to pull on my shoes at 5 a.m. July 14. It was responding to the call of nature from our elderly dog Nessie that had our aching joints heading out the door.

My aches and pains were quickly forgotten as I looked to the western horizon. Just above the tree-lined hill a beautiful orange and yellow orb glowed on the freshly minted azure sky, outlined with purple and lavender clouds.

I went back inside the house to grab my camera to capture the last few moments of the Buck Moon before it slipped below the horizon.

The Buck Moon was the largest “super” moon of 2022 and the second of three straight. Super moons appear larger than the average full moon. They shine about 16 percent brighter because they reach full phase near perigee – the closest point to earth. The final super moon of 2022 will be Aug. 11.

Every month has a moon name. July is called the Buck Moon but also goes by other Native American and cultural names such as Thunder Moon, Hay Moon, Berry Moon or Salmon Moon, among others.

Buck Moon comes from the Indigenous Algonquin culture, referring to the time of the year when new antlers are rapidly growing on male deer. The deer lose their antlers in the late winter or early spring but grow them back to full size by mid-summer.

A few minutes after taking the moon photos I was sipping coffee inside the house. I looked out our dining-room window and, as if on cue, there were two bucks nibbling on the vegetation in our recently mown hayfield.

I see deer on almost a daily basis on our farm, especially does and fawns this time of year. It’s the season of plenty for deer, who find the apple trees and plants in our yard a delicacy to be enjoyed. But it’s been a while since I’ve seen a buck.

It’s also been a challenging stretch personally, riding the ups and downs of the month that my father died two years ago as well as dealing with other family and health issues.

For many cultures the deer is a symbol of spiritual authority. Deer are messengers and represent sensitivity, intuition and gentleness. Bucks symbolize speed, stamina and leadership. They have antlers that grow closer to the sky; when the antlers fall off and grow again, it’s a symbol of regeneration.

Not wanting to disturb the two bucks that were less than 100 yards away, I quietly crept out to our front porch for a closer view. Light fog was lifting as the deer enjoyed their herbaceous breakfast, frequently lifting their majestic heads to look around.

I watched for a few minutes before one buck, then the other, walked up our driveway, through our yard and disappeared into the woods.

The night of the Buck Moon was over.

The height of summer often brings many fond memories of growing up on the farm – building dams in an icy creek on blazing hot days, catching f…

Visit bit.ly/WImarkets for an interactive map of farmers markets.

Growing up on our Jackson County farm in the 1970s, a bald-eagle sighting was something to behold. There were not many eagles left.

Back Roads from Wisconsin’s Past

Editor's note: A story about the Badger Village was published in the July 14 issue of Agri-View.

Back Roads from Wisconsin’s Past

BADGER VILLAGE, Wis. – It was an amazing phenomenon when Badger Village was built between Baraboo and Madison. There were 500 dwellings on 38 …

The pastime of rebuilding machines from decades past has been somewhat of a family hobby for entrants, said organizer Bonnie Esse.

The Buck Moon shines the night of July 13 in eastern Iowa County, Wisconsin.

The Buck Moon sets July 14 on the western horizon of Chris Hardie’s farm.

Two bucks appear in the field near Chris Hardie’s house a few minutes after the Buck Moon sets. 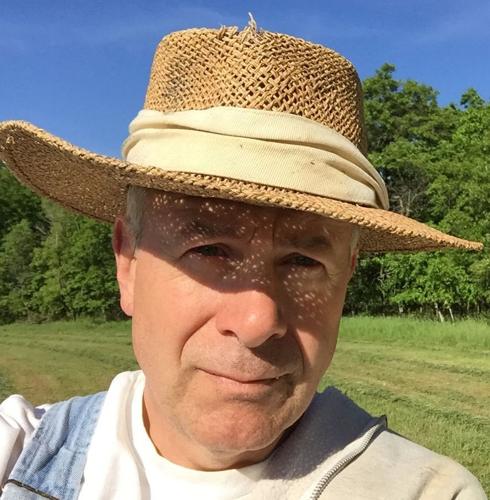