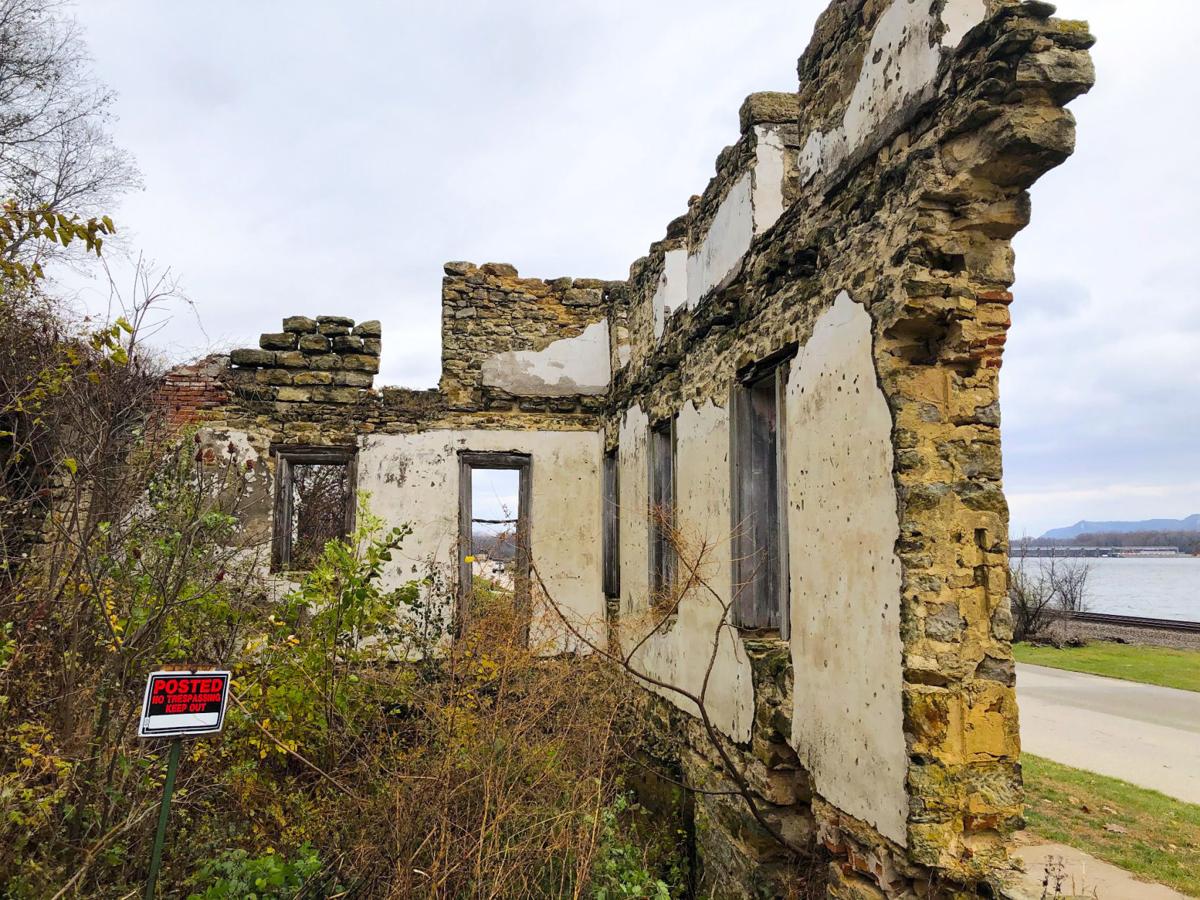 Partial walls are all that now remain of the Melchior Hotel and Brewery. 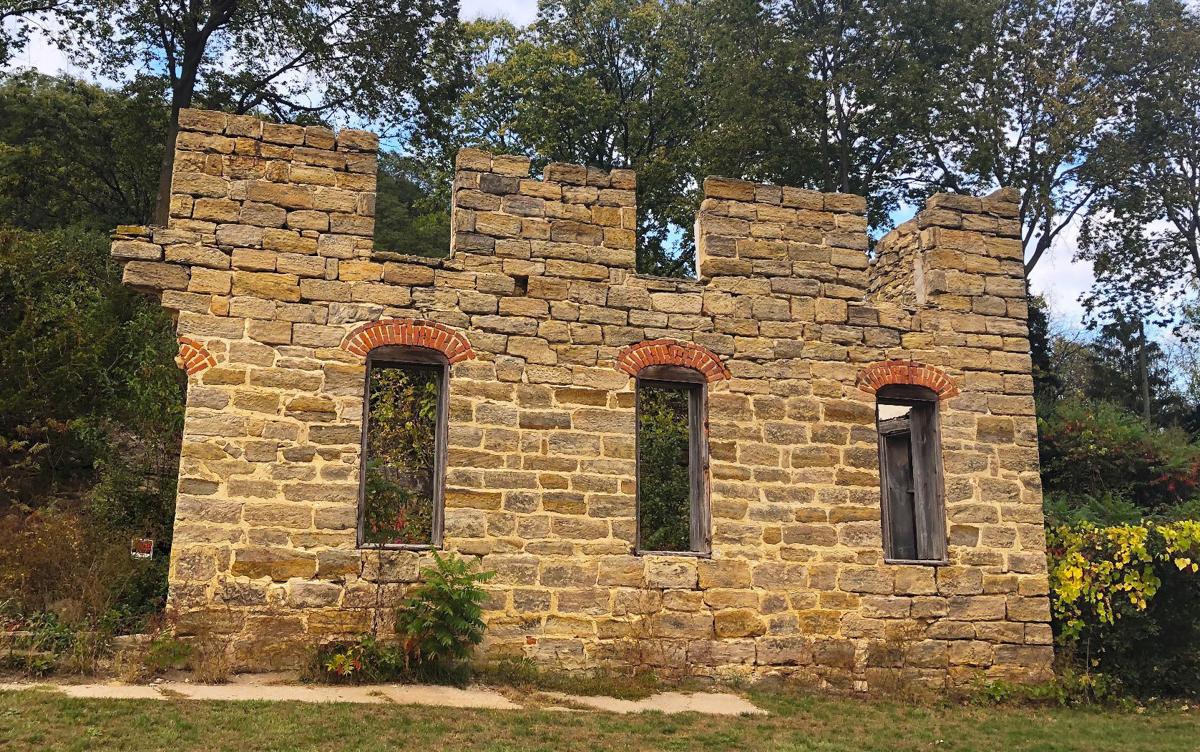 The ruins of the Melchior Hotel and Brewery stand in Trempealeau, Wisconsin, along the Mississippi River. 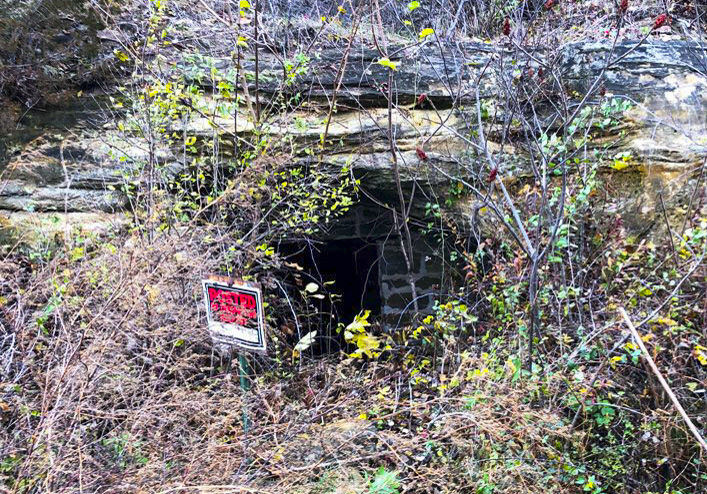 Caves carved out of the hillside in back of the Melchior Brewery are perfect for brewing and storing beer, thanks to cool temperatures in the caves. They were connected to the building. 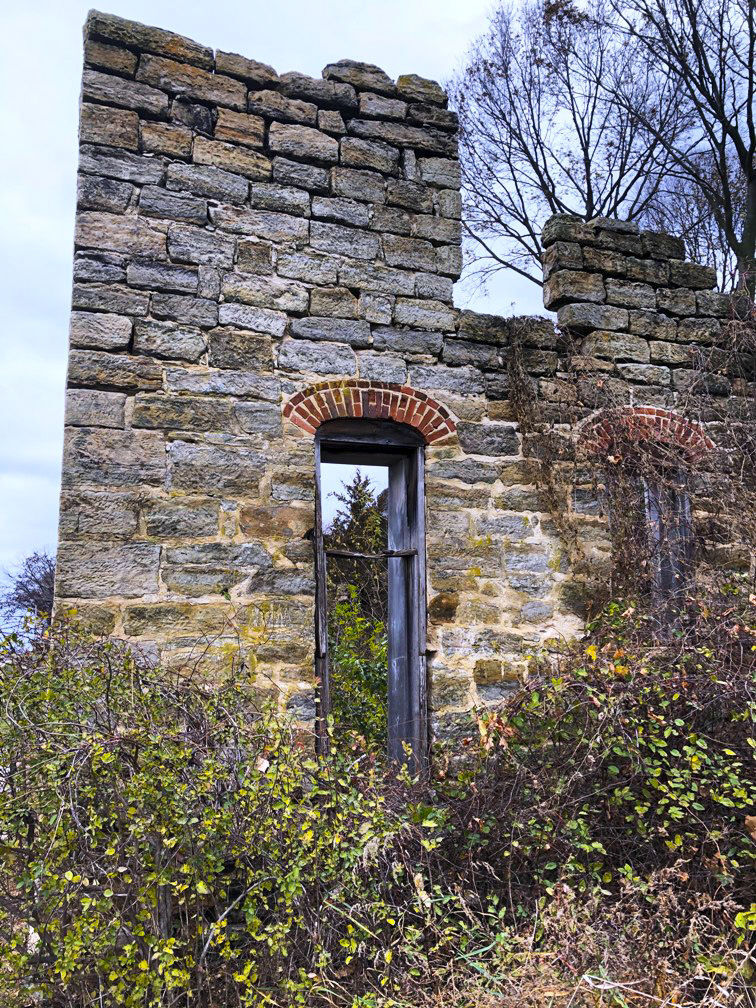 The side of the brewery building, though covered in vines, reflects the one-time beauty of the structure. 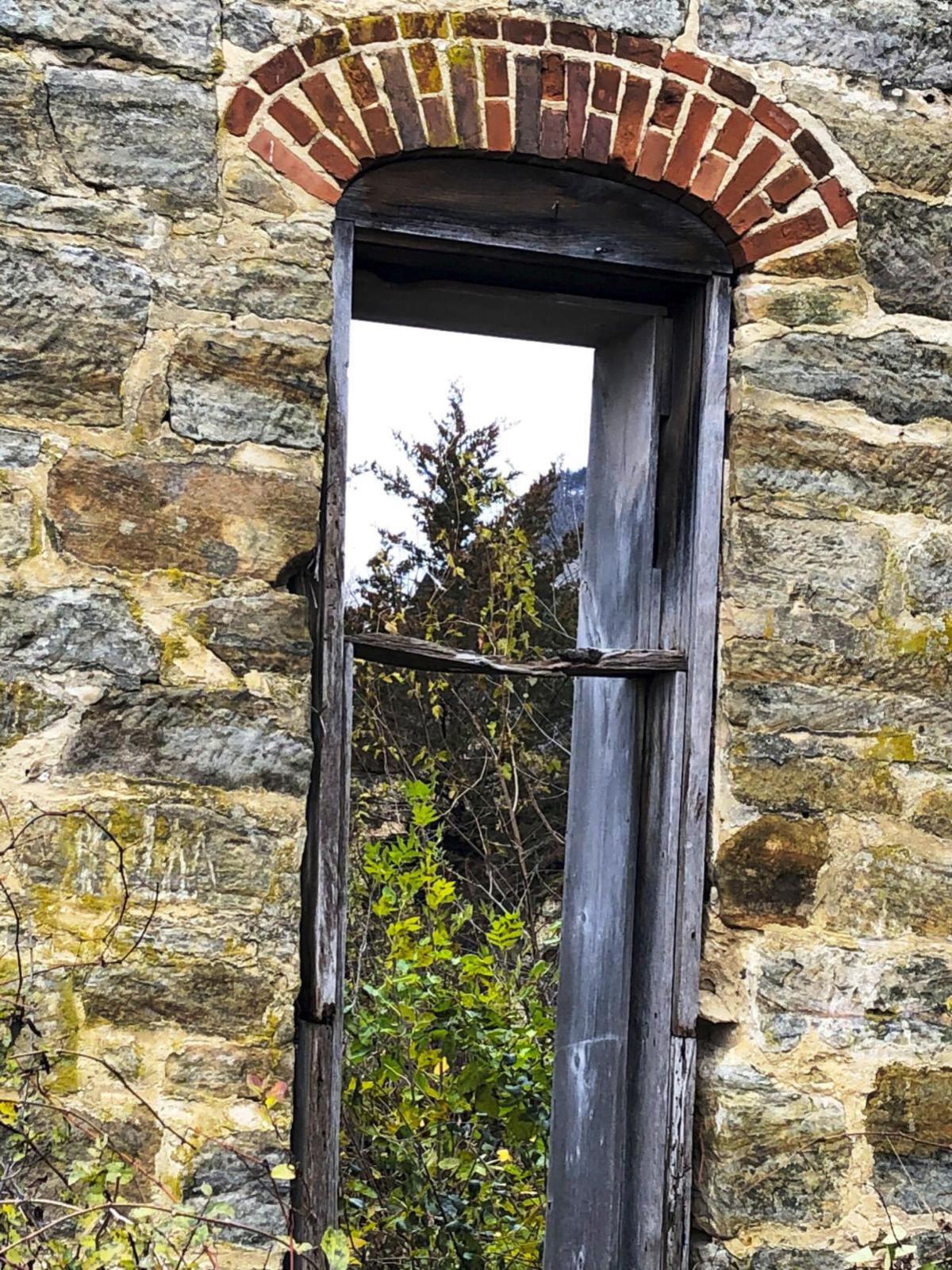 Brick arches still stand over top of the remaining windows. 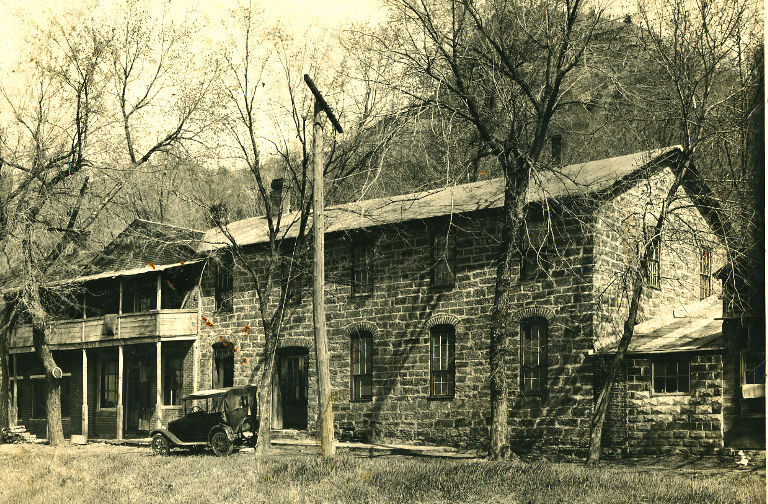 The brewery and hotel building are still standing in the 1920s. 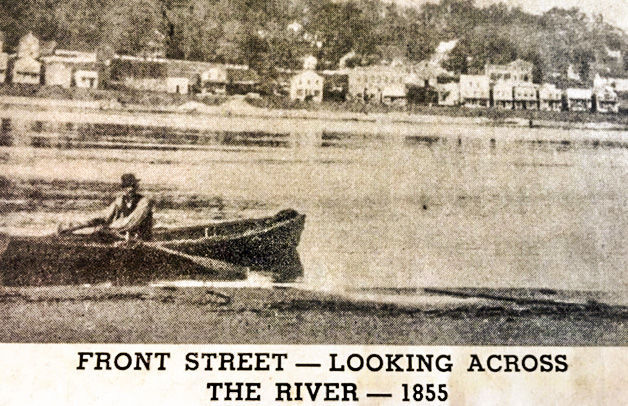 An 1855 view across the Mississippi River shows the Trempealeau riverfront. The Melchior Hotel and Brewery was fully open by 1862. 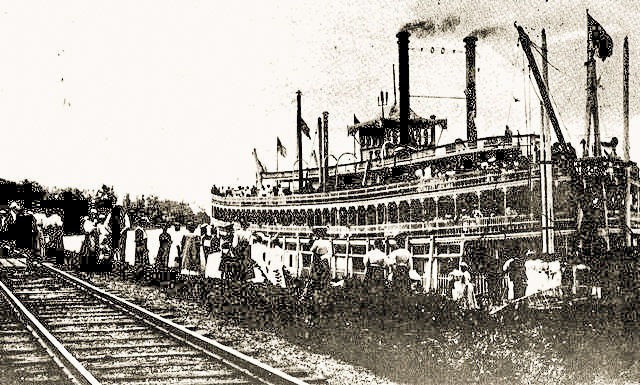 TREMPEALEAU, Wis. – The crumbling remains of a two-story stone building along the Mississippi River are all that’s left of what was once a bustling brewery and hotel.

The Melchior Hotel and Brewery was a stopping point for river travelers in the 1860s and 1870s. It was the work of Prussian immigrants who came to Trempealeau County in the early 1850s and started a small brewery in a log house.

I’ve known about the brewery since I did a feature story in 1988 on defunct breweries that were once an important part of their western-Wisconsin communities. Trempealeau was not alone; Fountain City, Alm, Black River Falls and Arcadia all had breweries, and there were several breweries in La Crosse – as well as in Winona, Minnesota.

Recently I took a photo of the ruins when on my way to nearby Perrot State Park, and posted it on my Facebook page. It drew such interest I decided to tell the brewery’s story.

Immigrants from Europe often brought their beer-making traditions to this country, which was the case with the Melchiors. According to the Wisconsin Historical Society, Jacob and Wilhelmina Melchior made a $6,000 investment in 1857 – a risky venture during a national financial depression – to build the two-story riverfront hotel and brewery on 126 feet of river frontage. The hotel was built in 1861, with a brewery addition put on the next year.

Melchior’s beer was a lager, which is fermented and stored at cool temperatures. Some Germans dug pits and lined them with ice harvested in the winter, but Melchior decided nature could provide his refrigeration. Deep caves were cut into the sandstone bluffs that abut the building. Those caves – which kept the beer at 44 degrees – were accessible from inside the brewery. They were 7 to 8 feet in height, and were connected by passages made by widening a natural fault in the sandstone. The two larger ones were ventilated by shafts dug through the earth and rock.

Melchior’s venture proved to be successful; the wheat boom brought prosperity in the 1860s. Census figures from the 1870s reported his building to be one of the most valuable properties in the village.

A 1937 article from the Galesville Republican described the era.

“In days even before the Civil War, Jacob Melchior stood in the doorway and waved greetings to the steamboat pilots as they steamed north to St. Paul or south to St. Louis” the author wrote. “Mr. Melchior gave most of his time to the manufacture of beer, while his wife conducted the hotel.”

Those were the days when river travel was common, before the lock and dam system. Steamboats could pull right up to the bank and dock. Apparently the Melchiors did well. Information from the Trempealeau County Historical Society indicates that Melchior and his wife were “large individuals noted for their girth in days when most folks were pretty slim.”

Melchior’s lager beer grew in popularity. He was by 1880 producing 150 barrels – or about 4,650 gallons – of beer annually. Some of it was shipped via rail, which ran right in front of the brewery, to Minneapolis and St. Paul. There it was reputedly more famous than the beers of Milwaukee.

It’s unclear when the brewery stopped making beer. Melchior died April 22, 1881, at the age of 61. The building survived a devastating fire that ravaged Trempealeau’s commercial center in 1888, but records with the Wisconsin Historical Society show it was unlikely the brewery was able to withstand for long the general economic decline of the village – which began at the close of the 19th century. The beer industry was also changing, with the advent of refrigeration and better transportation. Small, local breweries were closing.

Jacob Melchior’s son, Joseph Melchior, sold the property in 1896. Jacob’s widow, Wilhelmina Melchior, died in 1911. Both are buried in the Trempealeau Cemetery.

The building was used as a rooming house and had occupants at least until the 1960s, said current building owner John Smith of Trempealeau, who lives just above the ruins. The building was in 1984 named to the National Register of Historic Places. The standing walls, brick arches, fenestration patterns, caves and passageways that remain provide valuable insights into the construction and operations of a small-scale 19th-century brewery.

Smith said the building continues to deteriorate. It’s has been the victim of vandalism and graffiti through the years; visitors ignore the no-trespassing signs to explore the tunnels.

There has been some talk through the years of someone buying the building and restoring it, but the project would be costly, Smith said. The historic listing would not prevent someone from fixing it.

Smith said he believes the building’s proximity to the railroad tracks across the street has contributed to its decay; the shaking from the trains causes the walls to continue to crumble. But even as a ruin, the building represents a piece of the village’s past.

“It has a rich history and most locals like it just the way it is,” Smith said.

I don’t disagree. Ruins are often preserved and visited in other countries. My only suggestion would be to add a commemorative plaque or a sign that tells the story of the brewery on the river.

I’ve been humming “over the river and through the woods” as Jo and I make plans to host our children and grandchildren for Thanksgiving. There…

OPINION  Another one of my sports heroes has joined the Liars Hall of Shame. Aaron Rodgers is not the first Wisconsin professional athlete to …

There is no pain worse than the aching of a soul in spiritual anguish. A spiritual wound, unlike a physical injury or a body deteriorating fro…

I learned a new word the other day, referring to the desire of hardcore deer hunters to be in their stands as the fall breeding season heats u…

“Where’s my safety knife?” I asked while searching behind my desktop computer.

Partial walls are all that now remain of the Melchior Hotel and Brewery.

The ruins of the Melchior Hotel and Brewery stand in Trempealeau, Wisconsin, along the Mississippi River.

Caves carved out of the hillside in back of the Melchior Brewery are perfect for brewing and storing beer, thanks to cool temperatures in the caves. They were connected to the building.

The side of the brewery building, though covered in vines, reflects the one-time beauty of the structure.

Brick arches still stand over top of the remaining windows.

The brewery and hotel building are still standing in the 1920s.

An 1855 view across the Mississippi River shows the Trempealeau riverfront. The Melchior Hotel and Brewery was fully open by 1862.