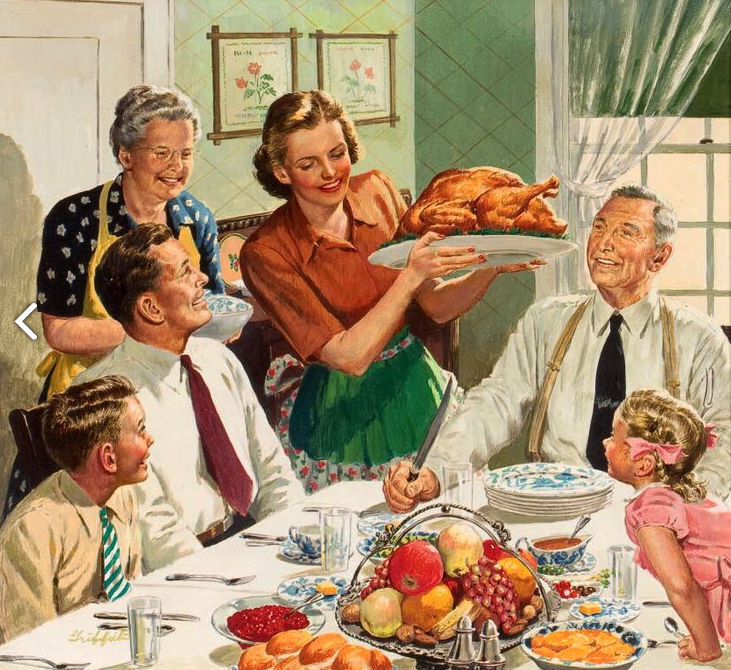 John Sumwalt's then-four-year-old cousin, the darling of the family with pixie curls and cute as a bug smile, says ... 'I am thankful for Mommy, Daddy, and all of my family.' More than 50 years later he learned she is gay.

I’ve been humming “over the river and through the woods” as Jo and I make plans to host our children and grandchildren for Thanksgiving. There will be one more at the table this year as our darling grandson, 2, takes his place in the family circle. I can hardly wait for that perfect Norman Rockwell moment when the turkey is set before us and we bow our heads to give thanks.

As I anticipate the annual joy, memory takes me back to Thanksgivings past on the farm where I grew up. We had rabbit or duck in those days, because that’s what we raised and what we could afford. Some years when our city cousins came we would spend the mornings playing in the haymow, swinging on the ropes, climbing the beams, and building forts and tunnels in the hay. Then we would go down to the creek to play hockey on the wide spot in the ice above the beaver dam, until they called us to dinner.

One year my mother initiated a new tradition based on a bright idea she found in Reader’s Digest. She placed three kernels of corn beside each plate. When we all sat down she declared that we were to hold up our corn and share three things for which we were thankful. Along with four parents and one grandmother, there were six of us boy cousins and four girls. We boys were thankful for things like cap guns, sling shots and Davey Crocket coonskin hats. The girls all did much better.

But it was the youngest of us, my four-year-old cousin, the darling of the family with pixie curls and cute as a bug smile, who dropped the mic as we would say today.

She held the kernels high above the plate and then, dropping them one by one, proclaimed in her sweet Shirley Temple voice, “I am thankful for Mommy, Daddy, and all of my family.”

It was quiet for what seemed like a long time and then Dad said, “Let us pray.”

We could not have known, in that perfect moment, that years later our darling little cousin would announce she was gay. I don’t know when she told her family or how they responded. I first heard it from her on Facebook, just a few months ago, 56 years after that etched-in-memory Thanksgiving on the farm. I can’t say for sure how or why, but somehow knowing this has changed me.

I remember with more tenderness the babies I have baptized during 40 years of ministry who grew up to discover, like my darling cousin, that they were different. I remember with more understanding what it means that at least 5 percent to 10 percent of all boys and girls are born that way. They didn’t choose to be homosexual any more than I chose to be heterosexual. I remember my best friend from high school who in 1968 joined our church in Ithaca at my invitation. Marty didn’t come to terms with who he was until he went into the army. That was the era of “don’t ask, don’t tell,” which really meant “don’t be.”

And I think of the thousands of darling boys and girls who come out of the proverbial closet every year – only to be shunned by family, called abominations by their pastors, lose their jobs and end up homeless on the street. Many take their own lives.

The needless suffering and tragedy is caused, in part, by well-meaning religious leaders who condemn innocents based on a narrow interpretation of four or five verses of scripture taken out of context. Like slave owners of the past, who could actually find many biblical passages in support of slavery, those otherwise kind souls perpetuate a culture of discrimination that is un-Christ-like. Those who have been too silent in the face of this ongoing suffering – myself included – bear even more responsibility. A hundred years from now our grandchildren’s grandchildren will look back at this time as a kind of dark age.

I will think of my cousin this year as I pass the turkey and beam on the faces of our four grandchildren --- and as I give thanks for the saving grace of the one who said, “Suffer the little darlings to come unto me ...”

John Sumwalt is a retired pastor and the son of dairy farmers. He is the author of “Shining Moments: Visions of the Holy in Ordinary Lives.” Email johnsumwalt@gmail.com or call 414-339-0676 to reach him.

TREMPEALEAU, Wis. – The crumbling remains of a two-story stone building along the Mississippi River are all that’s left of what was once a bus…

OPINION  Another one of my sports heroes has joined the Liars Hall of Shame. Aaron Rodgers is not the first Wisconsin professional athlete to …

There is no pain worse than the aching of a soul in spiritual anguish. A spiritual wound, unlike a physical injury or a body deteriorating fro…

I learned a new word the other day, referring to the desire of hardcore deer hunters to be in their stands as the fall breeding season heats u…

“Where’s my safety knife?” I asked while searching behind my desktop computer.

John Sumwalt's then-four-year-old cousin, the darling of the family with pixie curls and cute as a bug smile, says ... 'I am thankful for Mommy, Daddy, and all of my family.' More than 50 years later he learned she is gay.