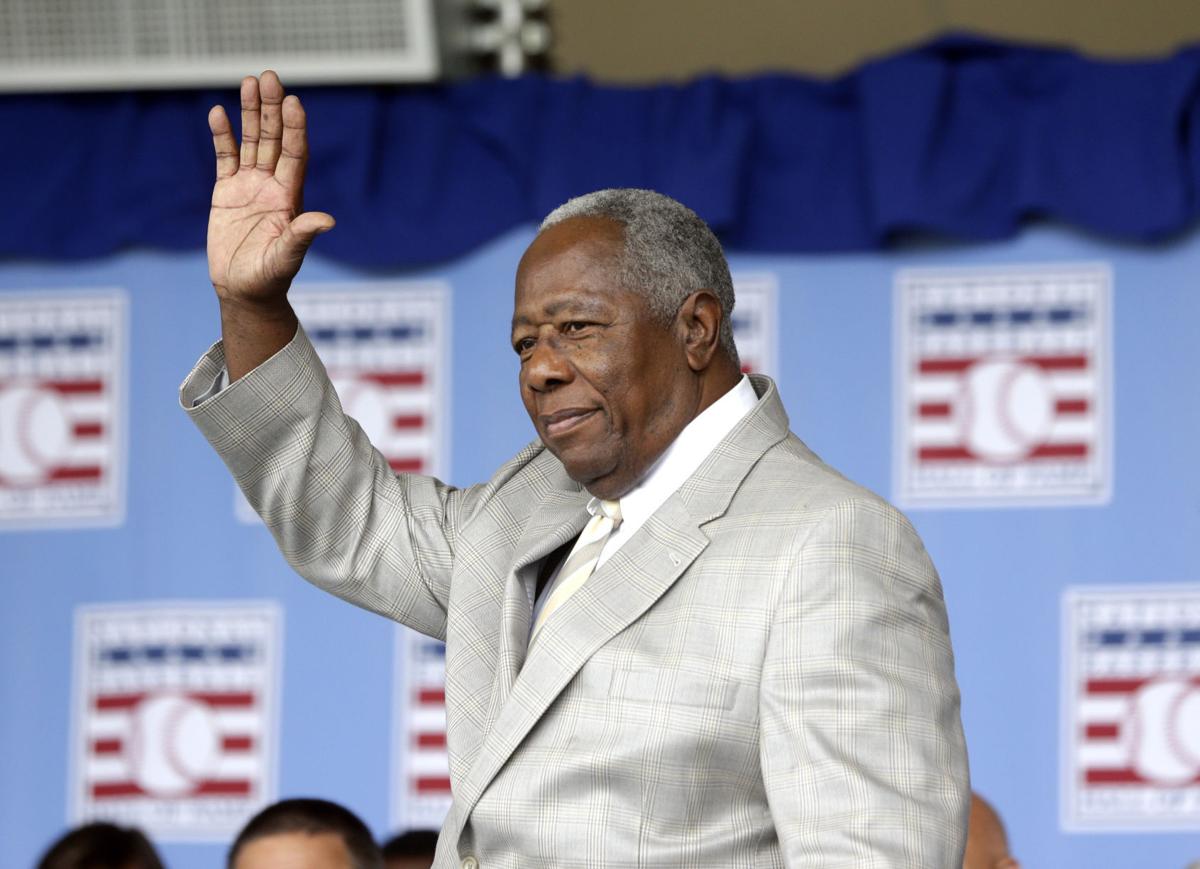 Hall of Famer Hank Aaron waves to the crowd July 28, 2013, during Baseball Hall of Fame induction ceremonies in Cooperstown, N.Y. Aaron, who began and ended his legendary baseball career in Milwaukee, died Jan. 22 at age 86. 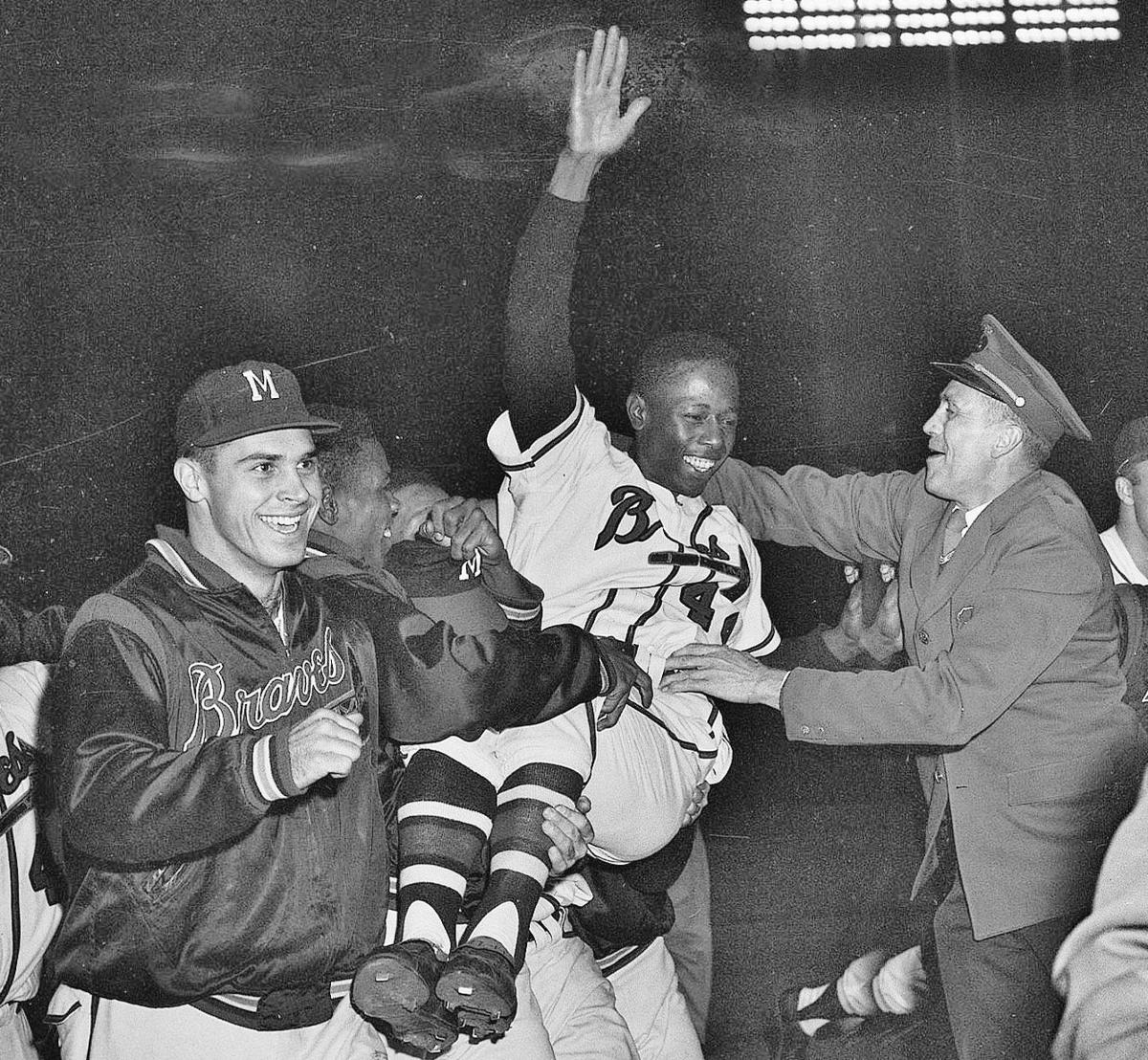 Braves star Hank Aaron is carried from the field by teammates after Milwaukee won the National League pennant with a 4-2 victory against the St. Louis Cardinals at County Stadium in Milwaukee on Sept. 23, 1957. The Braves would go on to defeat the New York Yankees in the World Series, which remains the city's only victory in the Fall Classic.

Those who enter the front gates of American Family Field in Milwaukee, home of the National League Milwaukee Brewers, walk by the statue of Henry Aaron. “Hammerin’ Hank” was one of my childhood baseball heroes and is now in my pantheon of spiritual heroes. Henry Aaron was a great human being – and a great baseball player too.

I never saw Hank play in person. I “saw” him play on the radio while we were milking cows. There was never time or money enough for a trip to the stadium 150 miles and a world away from the haymows and cornfields of our little farm in Richland County, Wisconsin. But Earl Gillespie’s play by play was almost as good as being there, especially the night Hank hit the pennant-winning homerun in 1957. It was his greatest moment in baseball, he later said; it was more important to him than breaking Babe Ruth’s home-run record. The Braves were tied with the St. Louis Cardinals two to two in the 11th inning. The winner of the game would go on to the World Series against the New York Yankees.

Hank hit that walk-off home run on the same day that race riots broke out in Little Rock, Arkansas, because of the integration of the public schools. Had they been playing in St Louis instead of Milwaukee, he would not have been allowed to stay in the same hotel as his white teammates – who carried him off the field.

It was a different world in 1957 when a black baseball player was the toast of the town in Milwaukee. President Dwight D. Eisenhower sent federal troops to Little Rock to escort nine brave black children into what, until that day, had been an all-white high school. They were jeered and spat upon as they made their way through the angry crowd up the steps of the school building.

During the next two weeks, as the troops kept the peace in Arkansas, Henry Aaron hit three home runs and a triple for a total of seven runs, to lead the Milwaukee Braves in beating the Yankees in a hard-fought seven-game series. The cows weren’t given as much attention as the radio during those tense days.

Not a lot had changed in America, 17 years later, when Hank came closer and closer to hitting that 715th home run as a member of the now-Atlanta Braves. Hate mail, some with death threats, started pouring into Atlanta because a black man was about to break Babe Ruth’s record. Hank was jeered and spat upon in some stadiums.

One reporter asked him how he could remain so calm in the midst of the threats on his life.

“When I was in the ball park, I felt there was nothing that could bother me,” Hank said. “I felt safe. I felt like I was surrounded by angels and I had God’s hand on my shoulder. I didn’t feel like anything could bother me.”

After breaking the record April 8, 1974, Hank and his wife, Billye, had a little party for a small group of family and friends. In his 1991 autobiography, “I Had a Hammer,” he described his feelings of deep thankfulness and an encounter with the holy.

“Billye and I were alone for a little while before everybody arrived,” he wrote. “While she was in the bedroom getting ready, I went off downstairs to be by myself for a few minutes. When I was alone and the door was shut, I got down on my knees and closed my eyes, and thanked God for pulling me through. At that moment I knew what the past 25 years of my life had been all about. I had done something that nobody else in the world had ever done, and with it came feelings that nobody else has ever had – not exactly anyway. I didn’t feel a wild sense of joy. I didn’t feel like celebrating. But I probably felt closer to God at that moment than at any other in my life. I felt a deep sense of gratitude and a wonderful surge of liberation all at the same time. I also felt a stream of tears running down my face.”

Though I never saw Hank Aaron play I did see him in person once, April 6, 1999, across several rows of seats at the old County Stadium. He was in town to throw out the first pitch the next day as the Milwaukee Brewers played their first home game in the National League. There was no way to move closer and I didn’t think to wave. I just stood and stared, awestruck to be so close to a baseball legend and so thankful for the life of that great man.

Hall of Famer Hank Aaron waves to the crowd July 28, 2013, during Baseball Hall of Fame induction ceremonies in Cooperstown, N.Y. Aaron, who began and ended his legendary baseball career in Milwaukee, died Jan. 22 at age 86.

Braves star Hank Aaron is carried from the field by teammates after Milwaukee won the National League pennant with a 4-2 victory against the St. Louis Cardinals at County Stadium in Milwaukee on Sept. 23, 1957. The Braves would go on to defeat the New York Yankees in the World Series, which remains the city's only victory in the Fall Classic.