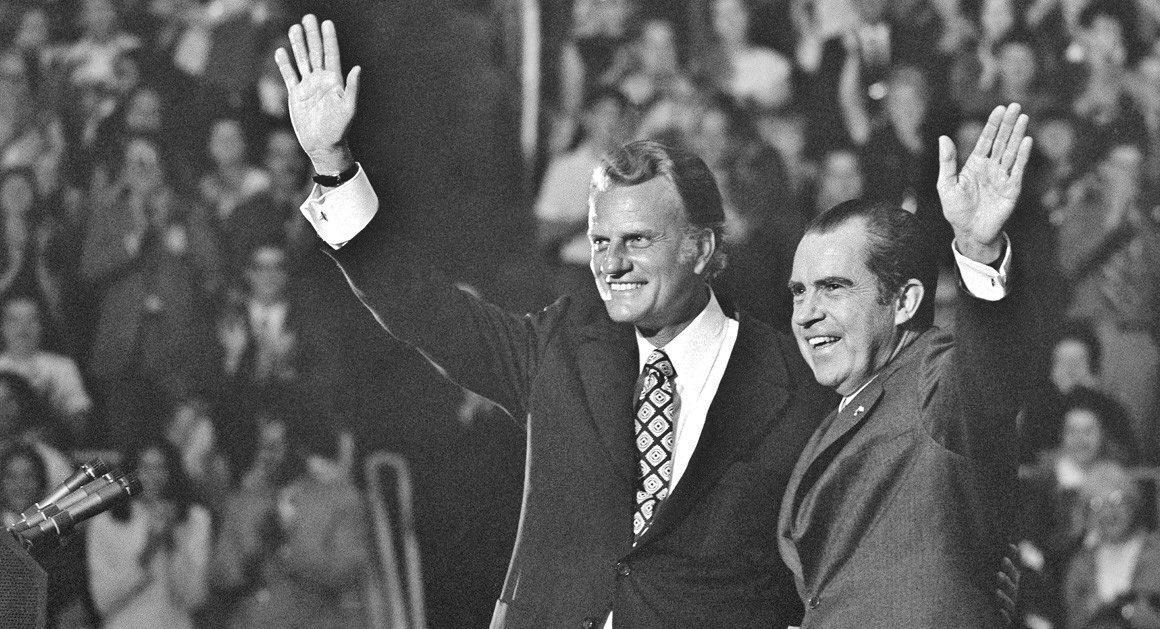 ‘I have never talked publicly or privately about the Jewish people, including conversations with President (Richard) Nixon, except in the most positive terms,' says Billy Graham in 1994, shown with the president in 1972. The infamous 'Nixon tapes' proved he had; he then apologized repeatedly.

‘I have never talked publicly or privately about the Jewish people, including conversations with President (Richard) Nixon, except in the most positive terms,' says Billy Graham in 1994, shown with the president in 1972. The infamous 'Nixon tapes' proved he had; he then apologized repeatedly.

The first time I heard Billy Graham preach was on the radio in the barn while milking cows. The barn radio was a window on the world for a farm kid in the 1950s and 1960s. I came to love baseball, listening to Earl Gillespie’s play-by-play calls of the Milwaukee Braves. I laughed at the on-air antics of my future brother-in-law, Rod Perry, and Jim Greeley on WRCO.

And one day I was mesmerized by the preaching of Billy Graham at one of his crusades. Even then I had thoughts of being a preacher someday, though my first choice was to pitch for the Braves like Lou Burdette and Warren Spahn. Later I would see Billy on TV, but I first knew him as a disembodied golden voice ringing out over a herd of pampered Holsteins.

So when Rod and Jim announced one morning that the Billy Graham film, “The Restless Ones,” was going to be showing at the Eskin theater in town, I knew I needed to find a way to go. I convinced Dad to let me have the car on a Sunday afternoon, picked up a friend and we went to the movies. I found the film deeply moving.

When Billy gave his famous altar call at the end I went forward and renewed my commitment to Christ. It marked the beginning of a long period of introspection, increased devotion and more than a little self-righteousness that was both puzzling and irritating to my family and friends.

I eventually grew out of what I now view as a rather narrow and limiting understanding of Jesus and the Christian faith. But I never stopped admiring Billy Graham. I don’t share his view of salvation. But I do appreciate the zeal with which he preached and tried to help people throughout his life. And I admire his integrity. One incident in his life stands out.

At the time of his death, at the age of 99, in February 2018, columnist Debbie Lord wrote, “As Americans mourn the death of evangelist Billy Graham, you would be hard-pressed to find a time where ‘America’s Pastor’ was held in anything other than the highest regard. Graham managed during 60 years of preaching the Gospel to sidestep even a hint of scandal – sexual, financial or otherwise. However a revelation in 1994 of a conversation he had with then-President Richard Nixon turned out to be a source of embarrassment for Graham – not at the time it was disclosed by Nixon Chief of Staff H.R. Haldeman, but years later when a tape of the conversation was released.

“At first Graham denied comments Haldeman made in his book, ”The Haldeman Diaries,” that Graham and Nixon had disparaged Jews in a conversation following a prayer breakfast held Feb. 1, 1972, in Washington D.C. Haldeman said Graham had talked about a Jewish ‘stranglehold’ on the country. ‘Those are not my words,’ Graham said in May 1994. ‘I have never talked publicly or privately about the Jewish people, including conversations with President Nixon, except in the most positive terms.’ Graham was believed and the matter dropped until 2002 when tapes from Nixon’s White House were released ... The 1972 conversation between Nixon and Graham was among those tapes, and Graham had to face the fact that he had been recorded saying the things of which Haldeman accused him.

“After the release of the tapes, Graham was horrified, according to Grant Wacker, a Duke Divinity School professor who wrote a book about Graham. (Graham) publicly apologized and asked for forgiveness from Jewish leaders in the country. ‘He did not spin it. He did not try to justify it,’ Wacker told NPR. ‘He said repeatedly he had done wrong and he was sorry.’”

There is evil in all of us. Confession of wrongdoing is the most difficult personal work any of us is forced to do. That’s why we must push ourselves to examine our dark sides and why some people never do it. Those who cannot ’fess up to sin, mistakes, errors and yes, even evil, can be a danger to themselves and others.

The Apostle Paul put it this way.

In those two short verses Paul sets a powerful example. He admits to doing evil. How many spiritual leaders in history have been so candid about their own sin? Preachers and prophets are reluctant to confess their sins in public for fear it will damage their credibility. Political leaders are even more reluctant. When was the last time we heard a world leader mention the word “sin,” much less confess to any personal sin? It doesn’t happen often yet leaders are just as frail as the rest of us.

No less a spiritual leader than Billy Graham had difficulty accepting in himself and publically confessing a sin that was contrary to everything he had preached. His personal witness, when confronted with his sin, may have been more important than any sermon Graham ever preached. Like Paul he was able to accept that all of us are tempted to do evil and that we often do it despite our best intentions – and that we are all accepted just as we are, as was sung after the altar call at every Billy Graham crusade.

“Just as I am, Thou wilt receive, Wilt welcome, pardon, cleanse, relieve, Because thy promise I believe, Just as I am I come.”