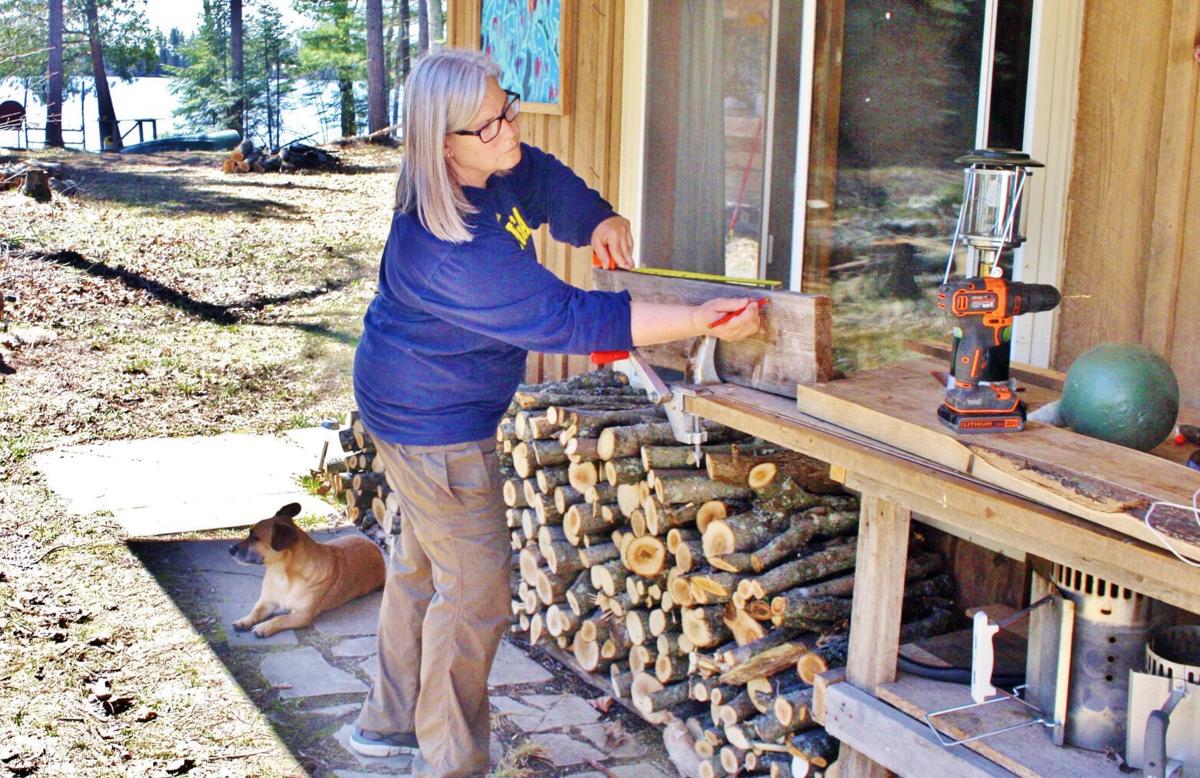 Wendy Galbraith moves on to another project after stacking firewood, while Sheila looks on wondering when it’s time to sit on the dock. 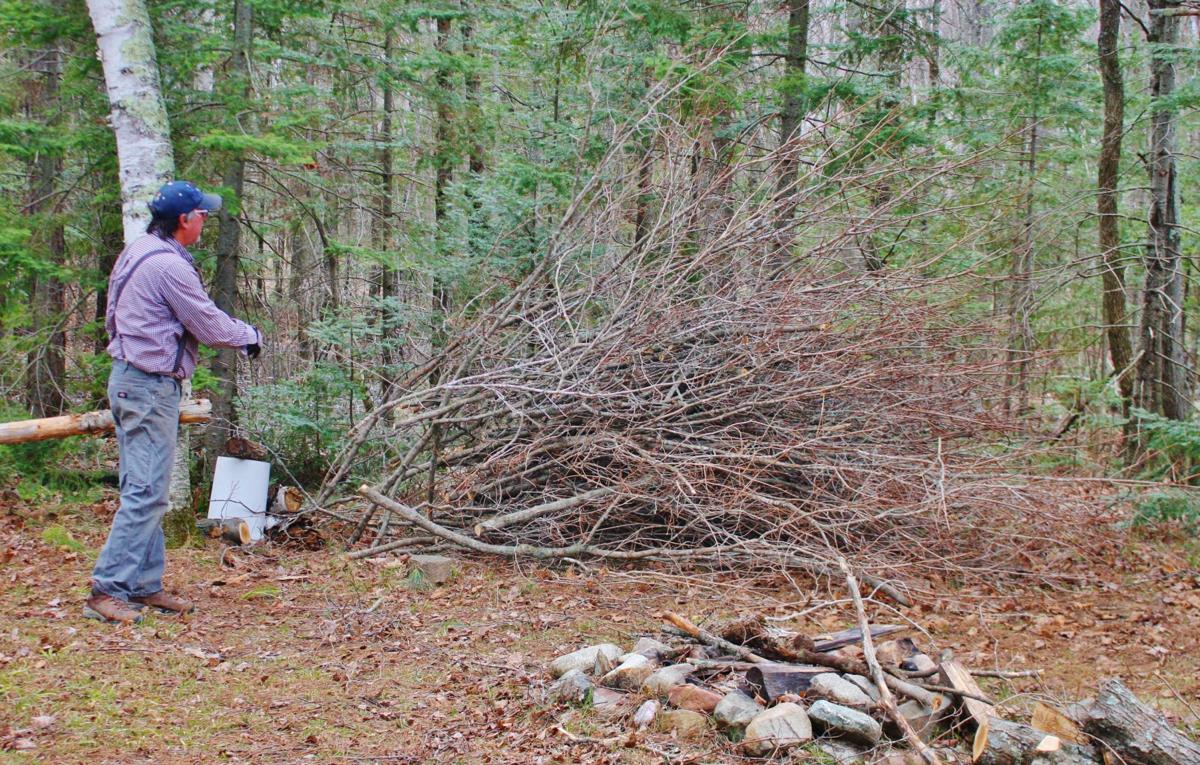 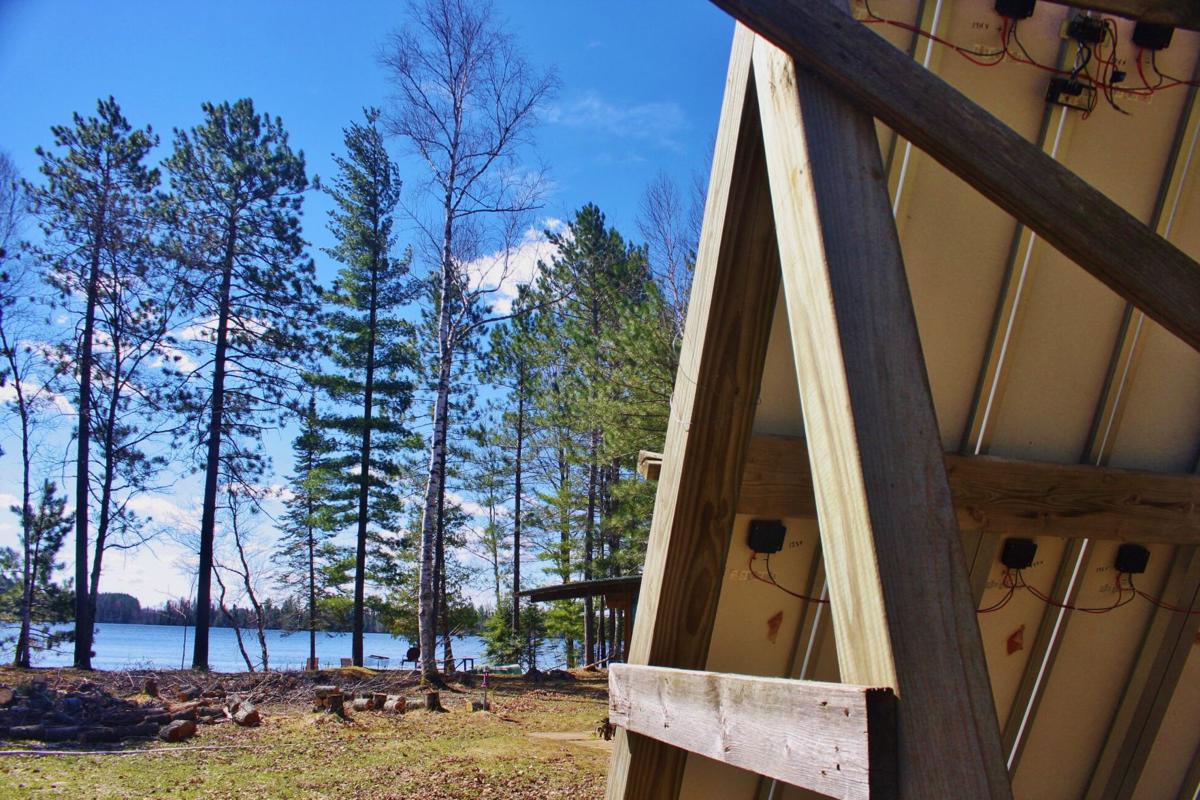 With trees taken down the sun reaches the Galbraith solar panels from 10 a.m. until early evening, allowing for a full day of harnessing its energy. 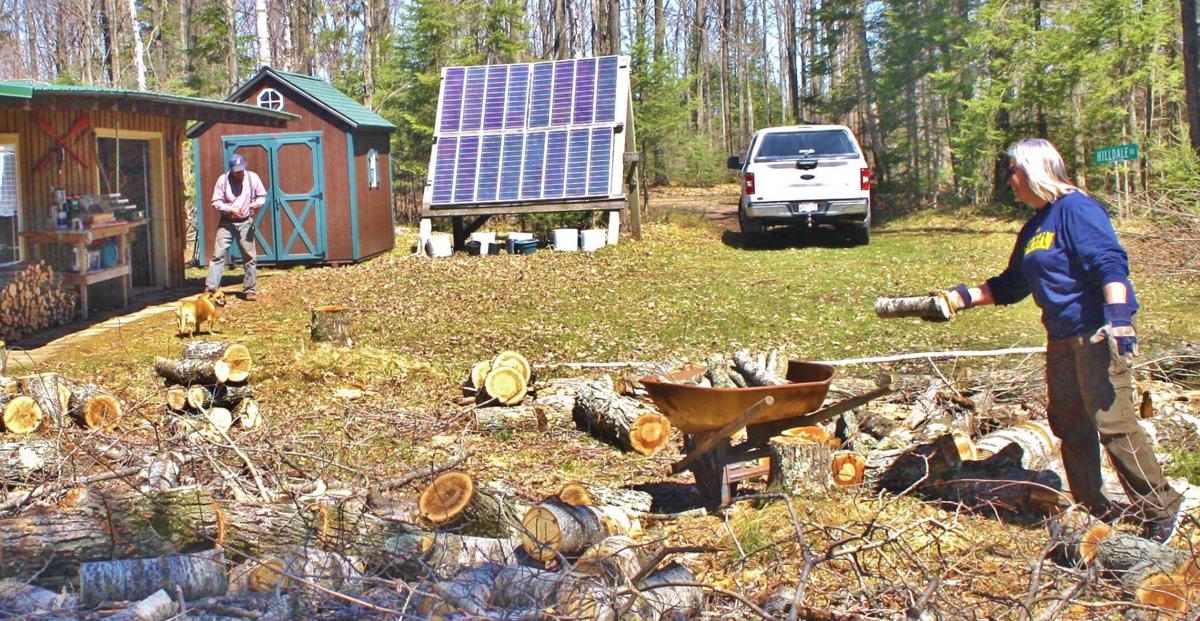 Greg Galbraith takes a moment to tie a lure to a fishing line while Wendy Galbraith continues to stack firewood.

Wendy Galbraith moves on to another project after stacking firewood, while Sheila looks on wondering when it’s time to sit on the dock.

With trees taken down the sun reaches the Galbraith solar panels from 10 a.m. until early evening, allowing for a full day of harnessing its energy.

Greg Galbraith takes a moment to tie a lure to a fishing line while Wendy Galbraith continues to stack firewood.

It was 6 a.m. May 3. The tiled floor of our lake cabin was still seeping, winter’s cold trapped beneath it. I put a few small logs in the Franklin stove and cheated them ablaze with a propane torch. I waited while coffee rumbled in an old-fashioned stovetop percolator.

Outside the lake was like a surreal Kodachrome dream – a shade of blue yet unnamed even by Crayola. A pair of loons wailed in the southwest quadrant, perhaps an eagle making a pass at them. As I raised my first pour of coffee it swept across my conscious from out of nowhere – I’m not tied to the farm anymore. I may never become accustomed to that.

The other night my wife, Wendy, made a comment just as we prepared for bed.

“Alright whose turn is it to check the cows?”

Along with the sweeping realization that I’m not tied to the farm was the reality that I’m fortunate to be doing exactly what I want with my life. I have a personal formula that works for me. I spend a third of my waking hours pursuing creativity and writing, a third in some process of learning that is often reading and a third physically improving the “places” where I live. For me those places are my woodlot property and lake cabin. It’s not a strict rule of thirds by any means; the learning portion has a lot of leeway. As far as I’m concerned, changing from a surface bait to a jig and worm while bass fishing falls into the learning category.

This past fall with the help of a cabin neighbor we began an upgrade of our solar system at the lake. He told us if we were serious about making the system more efficient we’d need to take down close to a dozen trees that were shading the panels. So much for being a tree hugger.

With that accomplished, at the end of April my wife and I were faced with the task of cleaning and stacking what we could of the limbs and smaller chunks of wood. There was a quiet Zen-like nature to the work. We had nothing but time and no burdensome responsibilities back at the farm to rush us. With the lake as a backdrop we worked to the tune of a myriad of birdsongs and gentle breezes.

There’s something thrilling about harnessing the sun’s rays to convert to usable electrical power. With the trees no longer shading the panels we’ve increased the capacity of the system greatly. Perhaps it appeals to my subconscious survivalist mentality. I’m no prepper by any means but it’s comforting to know we can have some basic conveniences that lie outside of an arguably flawed societal system. As is evident, capitalism is a bit shaky when faced with an unexpected crisis. If the power grid is ever substantially incapacitated the ramifications are potentially inconceivable. I should be fine to a degree as long as the sun cooperates.

I must confess I never thought I’d be free from the farm. I said it many times throughout my 30 years on the farm. When we began planning to sell the farm, dairy markets were extremely unstable with some processors cutting producers off with no place to sell their product. That instability has yet to subside, and now there’s a new problem shaking the industry.

Still it all worked out for us. Lady Luck came through a number of times along the way. But it’s true that the harder we work, the more readily Lady Luck shines upon us.