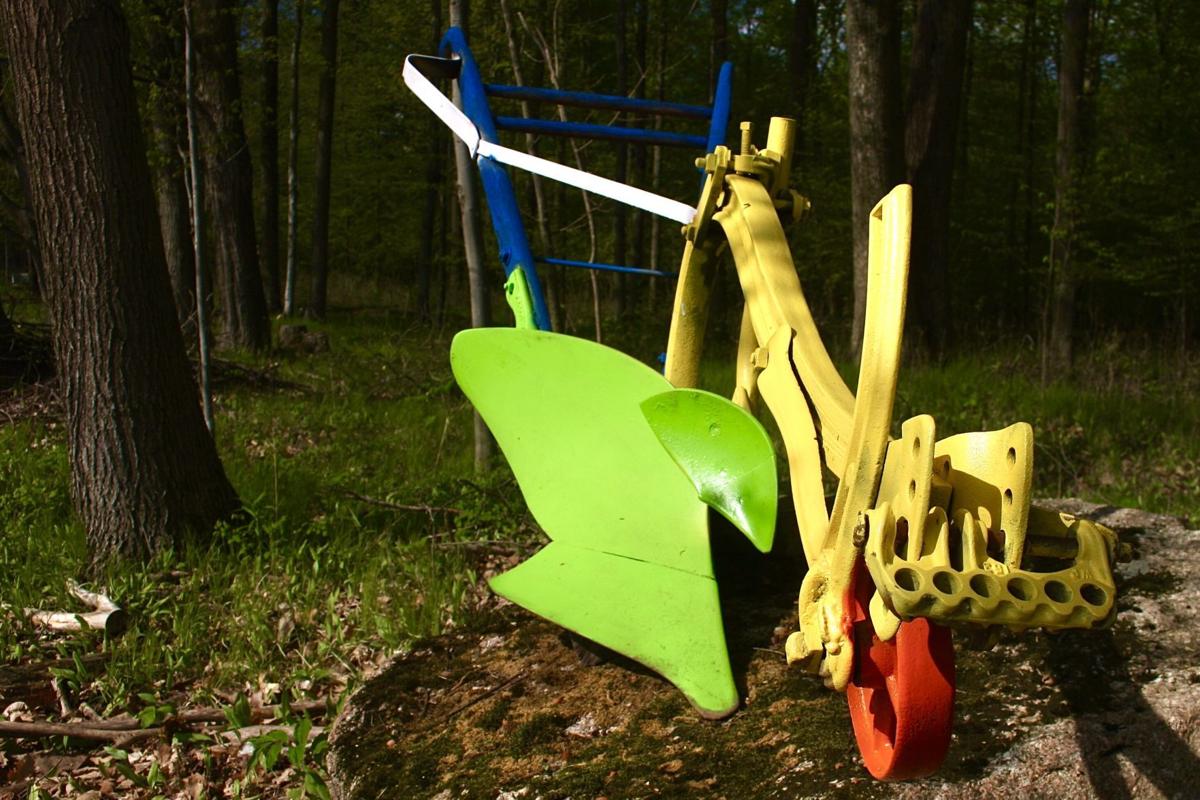 From left are the parts of a walking plow. All parts are mounted to the main iron beam, painted yellow. The plow handles fasten to the plow beam by two steel straps. The moldboard has an attached plowshare at the bottom. The small semi-circular curved plow jointer aids in flipping the leading edge of a newly cut furrow. The gauge wheel, painted orange, is adjustable to the desired plow depth. The clevis hitch has horizontal and vertical adjustments. 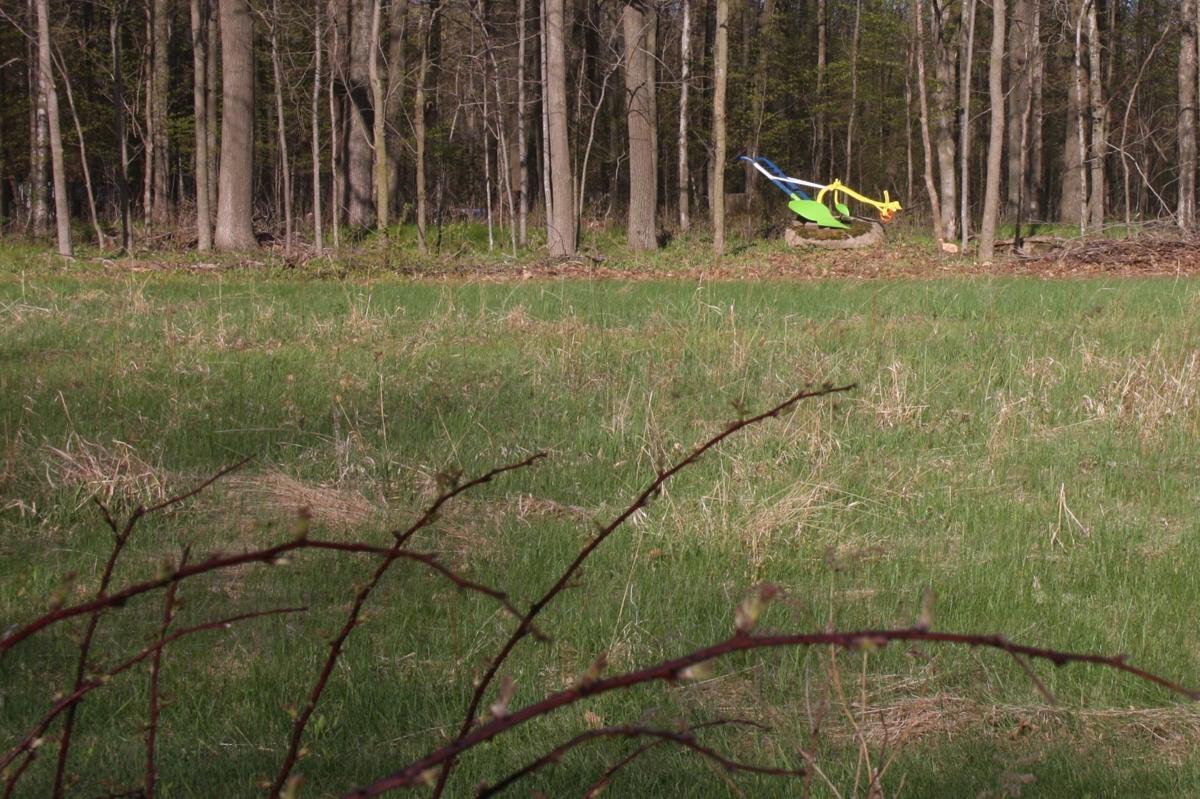 Greg Galbraith's plow is displayed along the edge of his woodlot beyond blackberry brambles.

Every link is freedom’s name;

Keep your hand on that plow;

Keep your hand on that plow;

The subject of plowing has been written and sung about by a number of artists through the years, from Odetta to Bob Dylan. In the famous song by folk singer Stan Rogers, “The Field Behind the Plow,” he paints a visual of the field behind the plow turning to straight dark rows. Probably the most famous plowing song is “Gospel Plow,” also called “Hold On” and “Keep Your Hands on the Plow.” It’s a song about keeping one’s eyes on the prize and never looking back. There are many versions. The arrangement by Pete Seeger likens the prize of freedom and equality for a metaphorical plowman to keep his eyes fixed on.

The earliest of plows, called Ard ploughs, consisted of sticks and timbers. There was no moldboard so the soil was scratched and loosened versus being inverted or flipped. Jethro Wood of Scipio, New York, in 1819 invented the cast-iron plow with replaceable parts. The main feature of his improved design involved a large curved moldboard that allowed the soil to be turned over completely. It’s a tillage approach that allows one to bury the past and begin anew on fresh soil. An old volume regarding plowing says that should a field mouse venture along a properly plowed furrow it would find no nook or cranny to hide in.

I hadn’t thought much about the process of moldboard plowing since my first and last attempt at it in 1989. Because I inherited my grandfather’s Oliver walking plow when I bought my woodlot workshop, I dug a little into the past of the old implement. It’s one of the patented chilled plows invented by James Oliver.

Oliver chilled plows were made using a sand-casting process resulting in a bottom with a thick hardened surface that was more durable than competing plow bottoms. They were superior in their ability to “scour.” Scouring is when the initial pass with a plow in the ground cleans the hardened surface, resulting in a smooth shine. Plows that don’t scour interrupt the flow of soil over the moldboard. That results in a soil buildup on the moldboard that makes plowing impossible.

Besides the guide wheel in front of my inherited plow and the main moldboard with attached plowshare, the only other part mounted to the plow beam is an adjustable jointer. It’s a small curved half-circle in front of the moldboard. It’s intended to aid in guiding the leading edge of sod that rolls off the moldboard downward. That results in a completely inverted section of sod lying in the previously cut furrow. One farmer described the jointer as the perfect addition to a plow; it prevented that pesky strip of grass from the lead edge of the cut furrow that would often settle sod-side-up rather than inverting.

Plowing was the only farm task I ever heard my grandfather complain about. It was a painfully slow procedure. It would be something if I could turn back the hands of time and have a discussion with him about plowing. Perhaps it would be a raw May morning in 1920 when he was hooking up his horse and preparing to plow a worn-out field of timothy and clover. I’d suggest he build a fence around it and let his fawn-colored Guernsey cows graze it. I’d even offer to help. I’d try to convince him it fit his passive personality to have his doe-eyed herd out next to the road where it could be admired. And folks would appreciate his well-developed cattle call, with its familiar “come boss come boss” refrain. There’d be a lot less manure to shovel from the barn gutter.

“Why spend time killing grass when you can let your cows convert it to milk the natural way,” I’d say.

Probably the biggest limitation to that time-travel fantasy would be a lack of electricity, which hadn’t yet come to the country during my grandfather’s walking-plow days. There’s no sense fencing around one big field for grazing because subdivisions are necessary to do it productively. Electric fences make rotational grazing more feasible for farmers.

One of the plow’s biggest enemies is rock. Next week I’ll tell about a granite boulder the size of a farmer’s kitchen table, and my old inherited Oliver walking plow that now sports a “coat of many colors” just like the Dolly Parton song. Until then I hope your tillage tasks are complete as the summer haying season begins.

Brian Simmons, in his introduction to the book of Proverbs, calls it a “divine seminary of wisdom and revelation to learn the ways of God.” He…

Oh, I want to sit on my porch and pick on my old guitar;

I’ve always been a bit of a weather nerd, as longtime readers already know, but recently our wild weather ride ventured into the ridiculous category.

Question: Does a cow have a personality?

After a year's hiatus, county fairs are beginning to return. Enjoy but stay safe. Follow all CDC guidelines.

I stared straight up at the ceiling tiles of the examination room and tried desperately to take my mind off what was happening in my lower regions.

These have been difficult days to live through, with many things causing us to lose our peace.

Caesar is the elder statesman of the barn cats on the Stern farm outside Kewaskum, Wisconsin. He's battle-worn and ornery; he shows his teeth …

From left are the parts of a walking plow. All parts are mounted to the main iron beam, painted yellow. The plow handles fasten to the plow beam by two steel straps. The moldboard has an attached plowshare at the bottom. The small semi-circular curved plow jointer aids in flipping the leading edge of a newly cut furrow. The gauge wheel, painted orange, is adjustable to the desired plow depth. The clevis hitch has horizontal and vertical adjustments.

Greg Galbraith's plow is displayed along the edge of his woodlot beyond blackberry brambles.