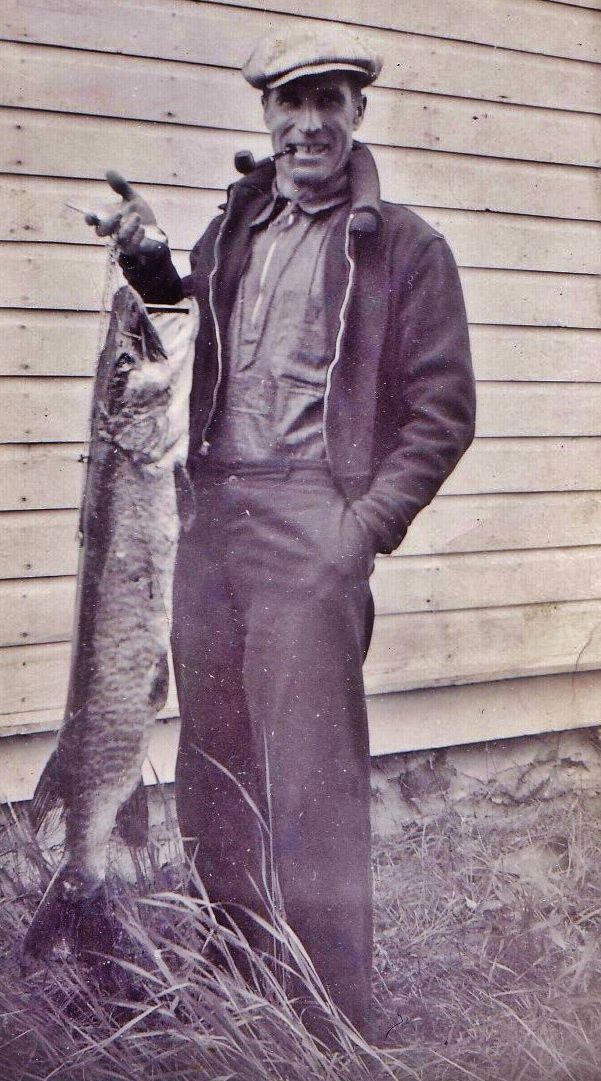 Greg Galbraith’s grandfather George Thorpe is the author's inspiration for the Hans character; he shows off his fishing skills. 'Even though my grandfather and his brother are the inspiration for my Hans and Bjorn stories I don’t use their actual personalities for those characters,' Galbraith says. 'I never talked politics with either of them.'

Greg Galbraith’s grandfather George Thorpe is the author's inspiration for the Hans character; he shows off his fishing skills. 'Even though my grandfather and his brother are the inspiration for my Hans and Bjorn stories I don’t use their actual personalities for those characters,' Galbraith says. 'I never talked politics with either of them.'

When we last heard from Hans and Bjorn, two Norwegian brothers who own dairy farms across from each other on a gravel road in rural Wisconsin, they were preparing a seeder for spring planting. With that accomplished and summer in full swing, they decided to take time off to head to a northwoods lake for some fishing. It was July 24, 1933.

The two headed out after the evening chores in Hans’ Plymouth. Hans flipped on the radio as they headed north on U.S. Highway 45 to Monk Lake in the northwoods. Monk is a deep lake that supports a population of burbot or “lawyer fish” and Musky. President Franklin Delano Roosevelt was just beginning his third Fireside Chat, broadcast to a nation reeling from the Great Depression. The focus of his chat was the National Recovery Administration. The brothers listened intently to the president detail the Farm Act.

“What it sounds like t’ me is a light at da end of da tunnel,” Hans replied. “How’s can da farmer produce food for dis country if he don’t have a penny at da end of da day for da work he does? Pertnear half da folks in dis country are involved in farmin’ an der power t’ purchase depends on decent prices for farm goods.”

“Well jeepers Johnson,” Bjorn retorted. “Old Franklin Delano is treatin’ us like mice in a grand experiment if you’se ask me. He even said so hisself.”

“He’s hopin’ to create unity amongst farmers,” Hans said to his brother. “Widout intervention from da government, farmers will never get t’gedder and bring production in line wit’ da demand of da consumer.”

“Well it’s an overreach on da part of da government,” Bjorn said. “It could snowball. Before you’se knows it der tellin’ us what t’ plant and what not t’ plant. And worse yet der tinkin’ bout payin’ us t’ leave da soil idle. Jus’ wait til dem city slickers finds out we’re getting greenbacks for what we ain’t growin.”

“Sounds like you’se been listening to dat upstart liberal-minded economist John Kennet Galbert,” Bjorn said while looking at his brother with his one good eye. “He’s behind all dese grand plans y’know, dat Galbert fella.”

Hans turned around back to Monk; he pulled into the boat landing just as dark settled in.

“It’s mostly about hope,” Hans told his brother as they slid the johnboat out of the car trunk to the lake edge.

Bjorn went back to the Plymouth to grab a lantern, baitcasting rigs and stinkbait made from an old family recipe.

“The whole New Deal FDR is promoting is about restoring hope to an ailing nation,” Hans said. “If a leader can’t provide a sense of hope to da folks in dis country, da country is in trouble. Da common man has gotta have hope in order t’ strive t’ get ahead. A man can’t go ’round wit’ his head all down in despair. Before you’se knows it, only da corporations got da dollars. Da common man needs hope.”

It was 5 a.m. when the sun crested the black spruce trees on the eastern horizon. With a cooler full of burbot fillets next to the fire pit from the previous night’s midnight run, Bjorn slept in while Hans flicked one more cast to the deepest part of the lake.

“Hope,” he whispered, recalling their conversation.

A fish ran with the minnow at 20 foot deep; Hans set the hook. It was 30 minutes later when he showed Bjorn a 40-inch Musky that had been dragging his anchored boat around the lake before he was able to gaff and land it.