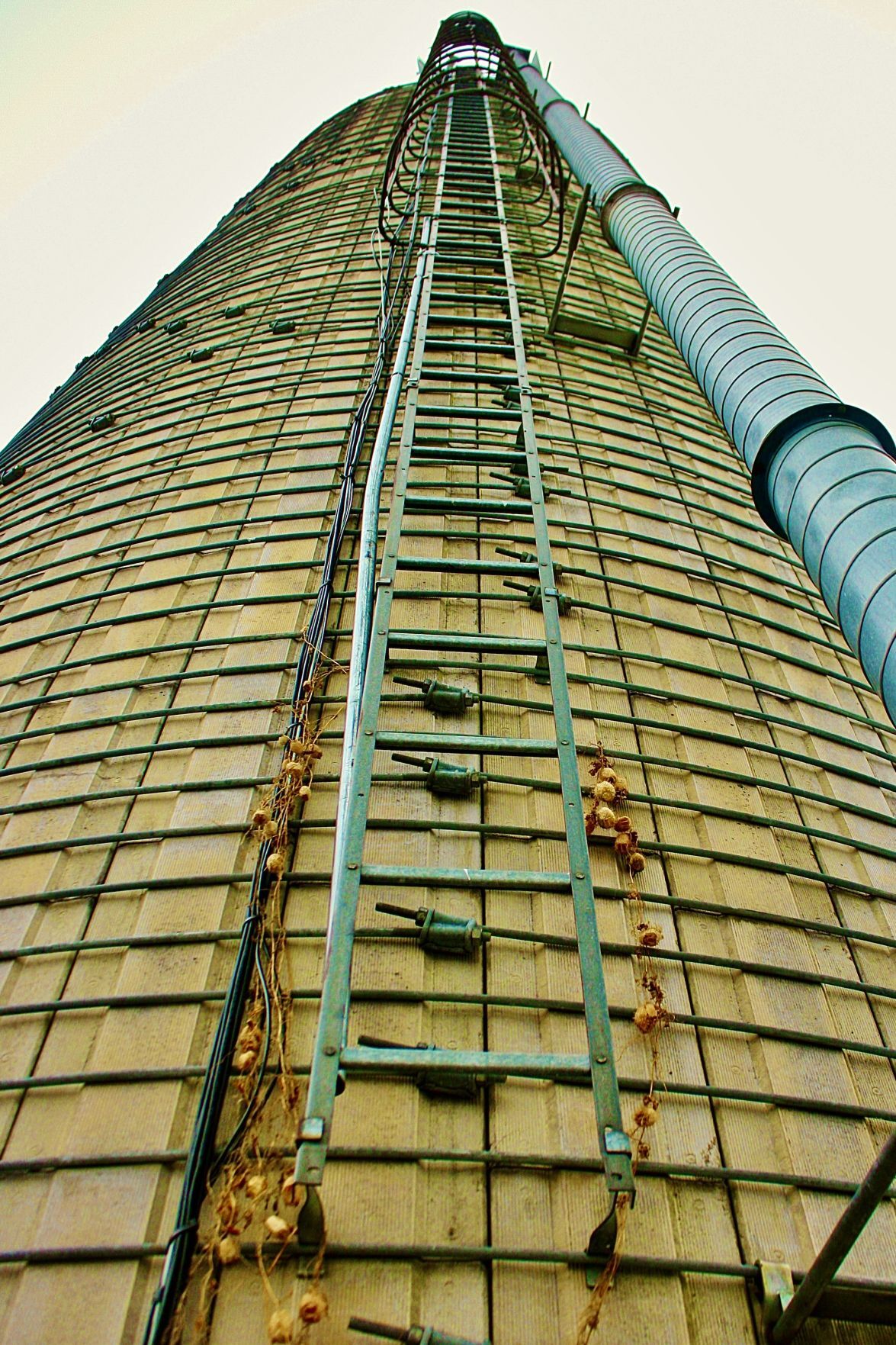 A 70-foot cement-stave silo in Marathon County, Wisconsin, isn't a Harvestore silo. But one can feel what the climb might be like. 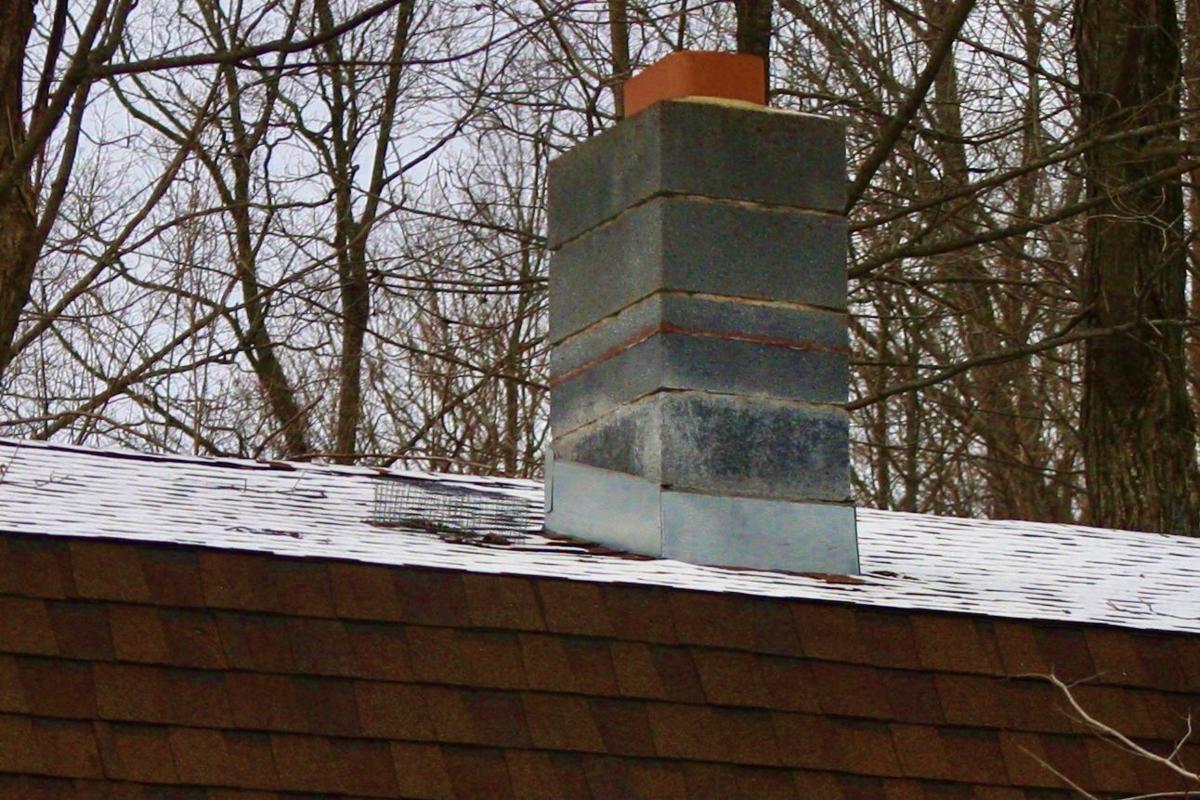 A wire mesh has fallen from the chimney opening of Greg Galbraith's woodshop. He doesn't plan on putting it back anytime soon.

I once walked on the top section of a Harvestore silo like it was no big deal. I was unfazed by the perspective of central Illinois from 100 feet up while I carried out the procedure of closing the units after they were filled with forage at the University of Illinois dairy farm where I worked while attending college.

There was a guardrail around the work space; I needed to conform my torso to the pitch of the silo top to do the final hatch closing. I’d do the task and then take in the view of fertile flatlands before my arduous descent down the narrow ladder rungs. On a clear day I could see all the way to Thomasboro along Interstate 57. It was by no means a daredevil stunt, but I can say one thing; there’s no way I could do that now.

Nor can I balance on a 20-foot wooden extension ladder extended to its maximum like I did every spring and fall on the farm. I would switch the old storm and screen windows appropriate to the season; there were about 40. It was a great day when we were able to invest in modern double-hung-triple-glazed insulated replacements. There was no more peering out a freshly thawed opening in the frosty window on a January night to see what all the bellering was about.

I knew my fear of heights was on the increase when in the mid-1990s I helped a friend re-roof the granary on my farm. The gentle pitch was nearly flat but I was splayed out like Spiderman climbing a Manhattan skyscraper, putting as much of my body in contact with the surface as I could. It was difficult hammering a roofing nail in a position like that. I climbed down and took over the ground-duty work – fetching rolls of roofing and disposing the discards.

In certain situations I can’t even watch a person scale a ladder to perform some elevated task, much less watch a GoPro video of a rock climber scaling a vertical expanse. It sends a current-like jolt through my core. I’ve taken the theme of being a grounded individual to a literal sense. As it turns out I’m not alone in this evolution that has crept in as I age. Numerous studies have revealed a fear of heights often starts, or worsens, late in life. Oh mercy it’s not easy using the phrase “late in life” when talking about myself but I’ll venture on.

Kevin Gournay, emeritus professor at the Institute of Psychiatry at King’s College London, writes in “The Sheldon Short Guide to Phobias and Panic” that as one grows older the organ of balance tends to deteriorate so one is likely to feel more physically vulnerable. He also writes that older adults tend to have people who depend on them – and that can make them more troubled by the possibility of falling. I found a quote by Gournay intriguing.

“As an adult you’re more aware of what you and your loved ones have to lose, and that’s all part and parcel of vulnerability,” he wrote.

Gournay also said as one ages the production of adrenaline decreases. With the decrease in the flight-or-fight hormone other phobias tend to diminish. Adrenaline is what causes the racing heart and dizziness we experience when we’re encountering something we’re afraid of. One might still have the fear, but won’t have the intense feelings like when younger.

Speaking on a personal level I can say my phobias have certainly changed through time. My biggest phobia in my teen years was dialing the number of a hopeful date, fearing the sound of her father’s voice answering the phone. My crackly teenage vocal cords often responded in tenor notes I didn’t know I had. In college I had a phobia of forgetting to properly register for the next semester’s classes; years later I still had nightmares about it. I’ve developed a slight elevator phobia now that I live in an apartment.

I don’t think it’s out of the realm that many have developed “social distancing” and germ phobias due to the pandemic. One wonders how long those issues will linger. Perhaps a widespread vaccination effort will take care of those phobias – except for those afraid to take the vaccine.

One last thing, friend. There’s a screen that’s dislodged from the chimney opening on top of my workshop. It’s lying on the roof next to the chimney about 18 feet off the ground. There’s a modern aluminum extension ladder lying along the ground outside the shop. If in the neighborhood, please stop in to put the screen on the chimney top where it belongs. Preferably when I’m not there. I can’t watch.

A 70-foot cement-stave silo in Marathon County, Wisconsin, isn't a Harvestore silo. But one can feel what the climb might be like.

A wire mesh has fallen from the chimney opening of Greg Galbraith's woodshop. He doesn't plan on putting it back anytime soon.