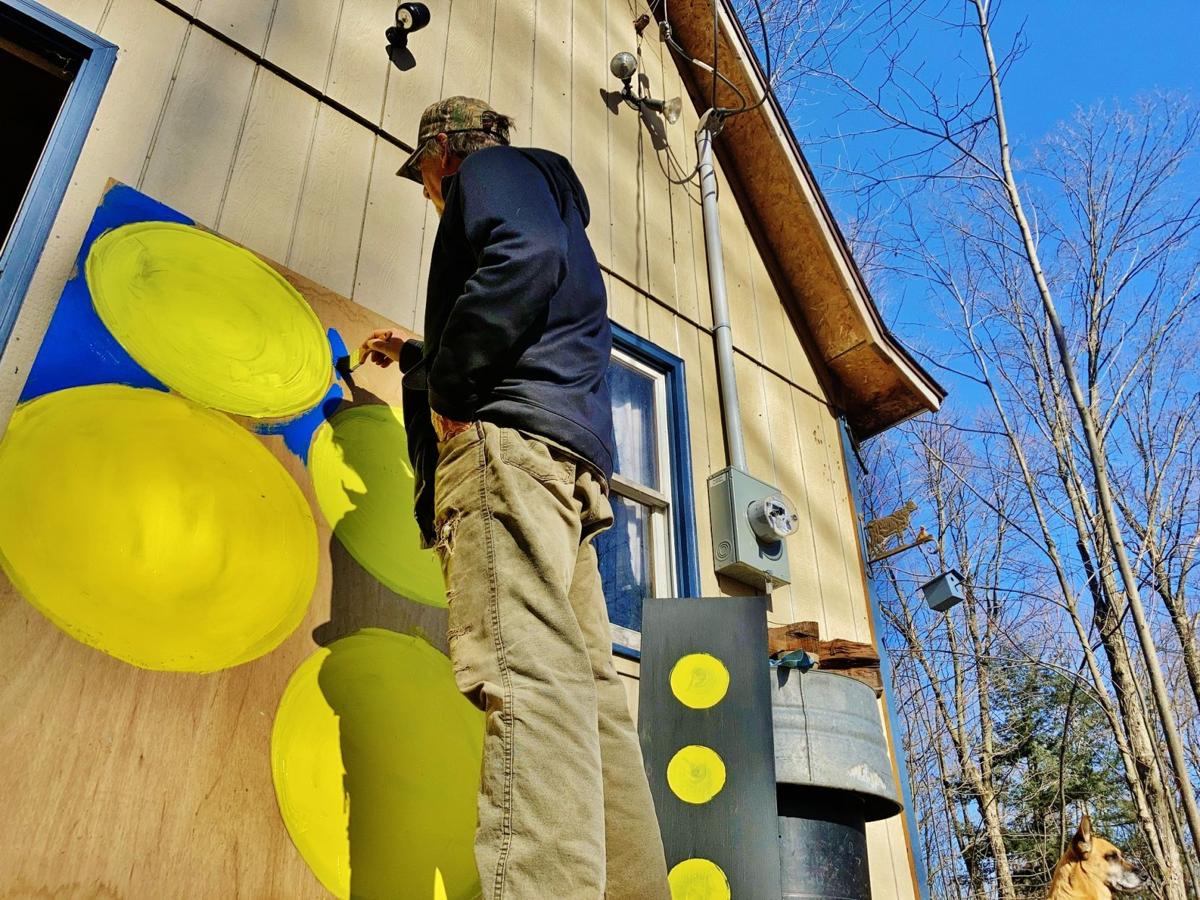 Greg Galbraith says he's thankful for ancestors who kept and maintained his woodlot. His uncle built the syrup shack he uses for woodworking and art projects. 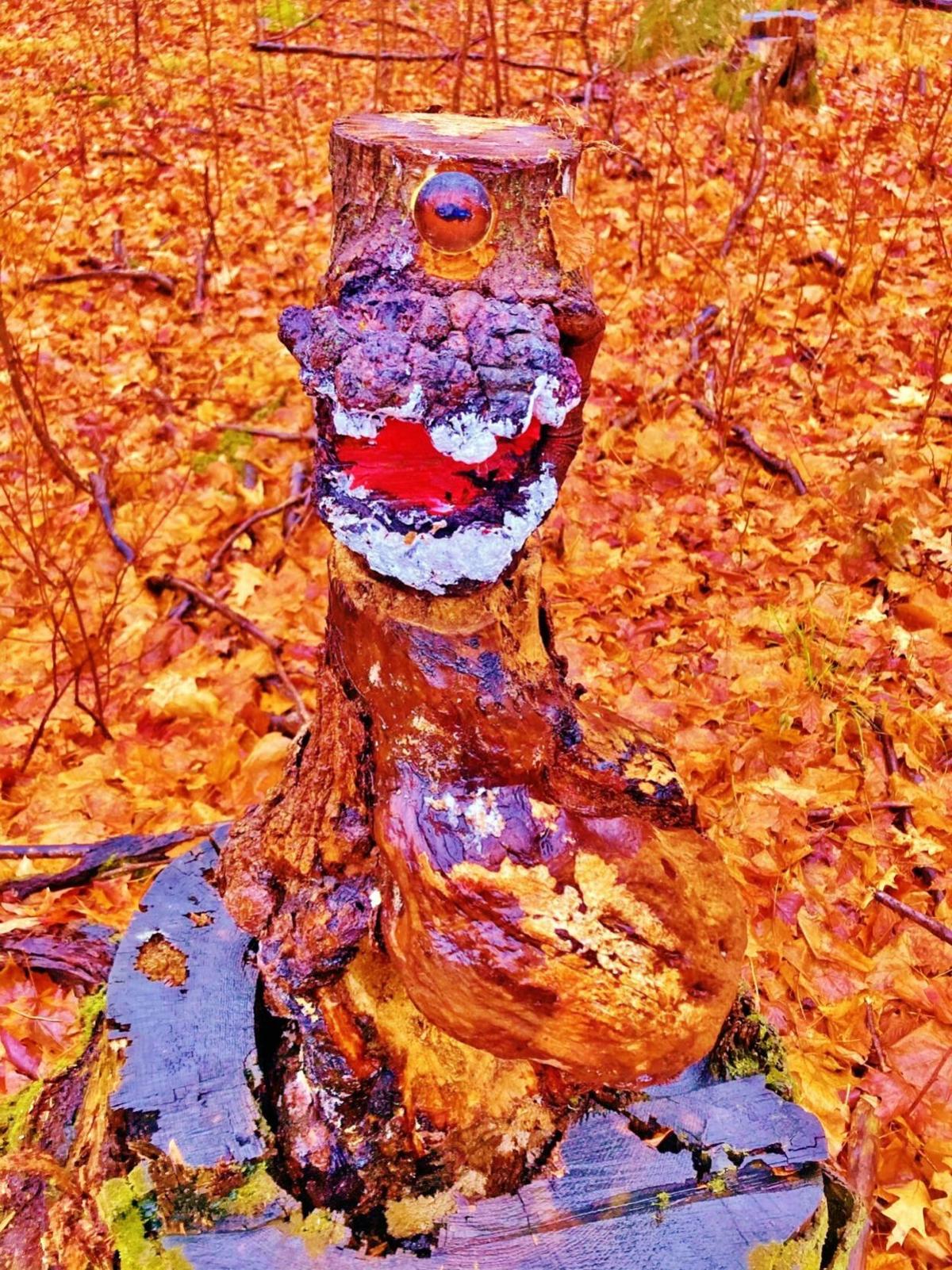 Greg Galbraith is scheming to turn a woodlot creature made from bitternut hickory into a rendition of a Sidehill Gouger. 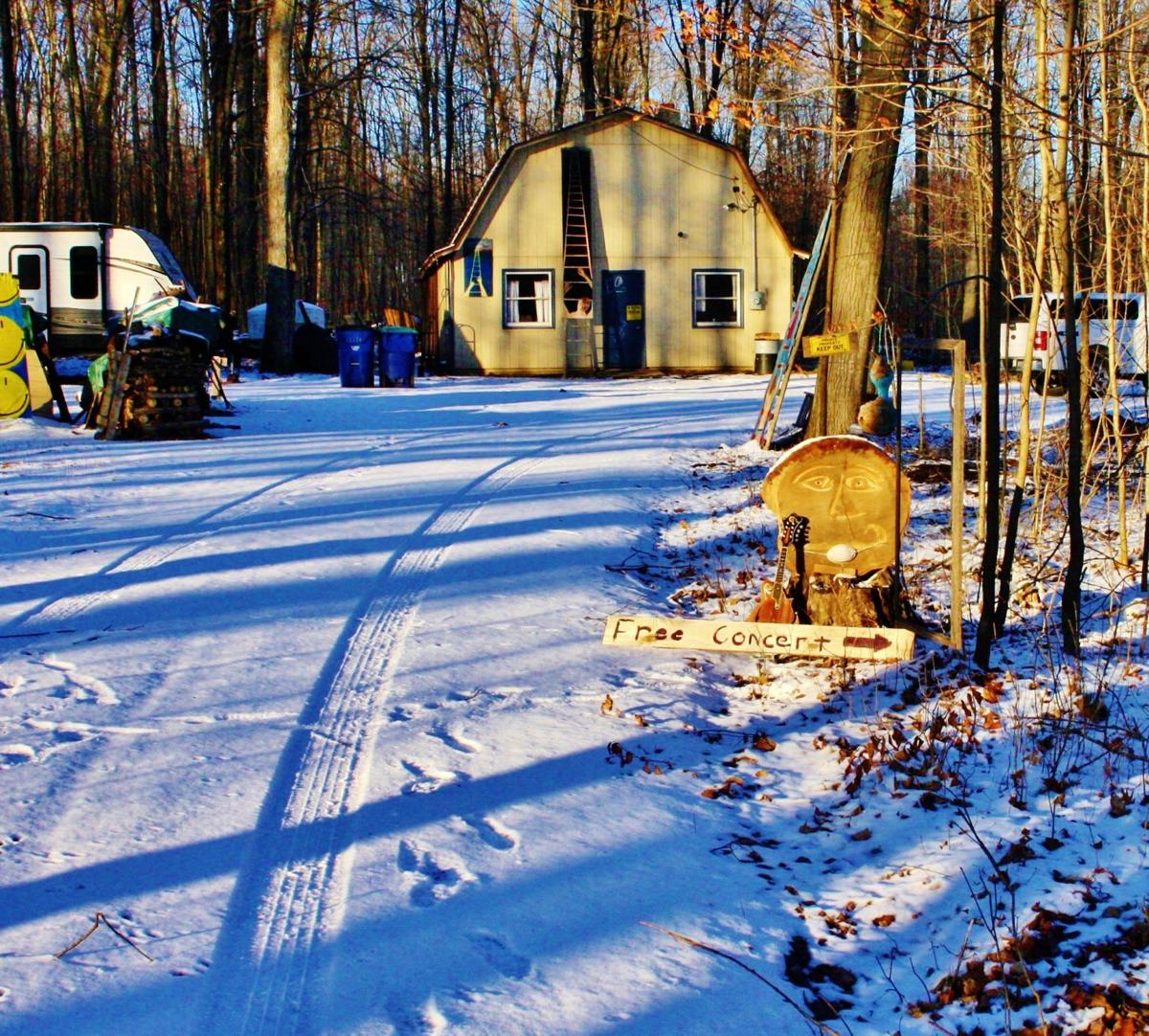 Happy Thanksgiving from the woodlot, where the gnome is always smiling, the nuthatch is fat and happy, and there’s free music everyday if one takes time to listen. 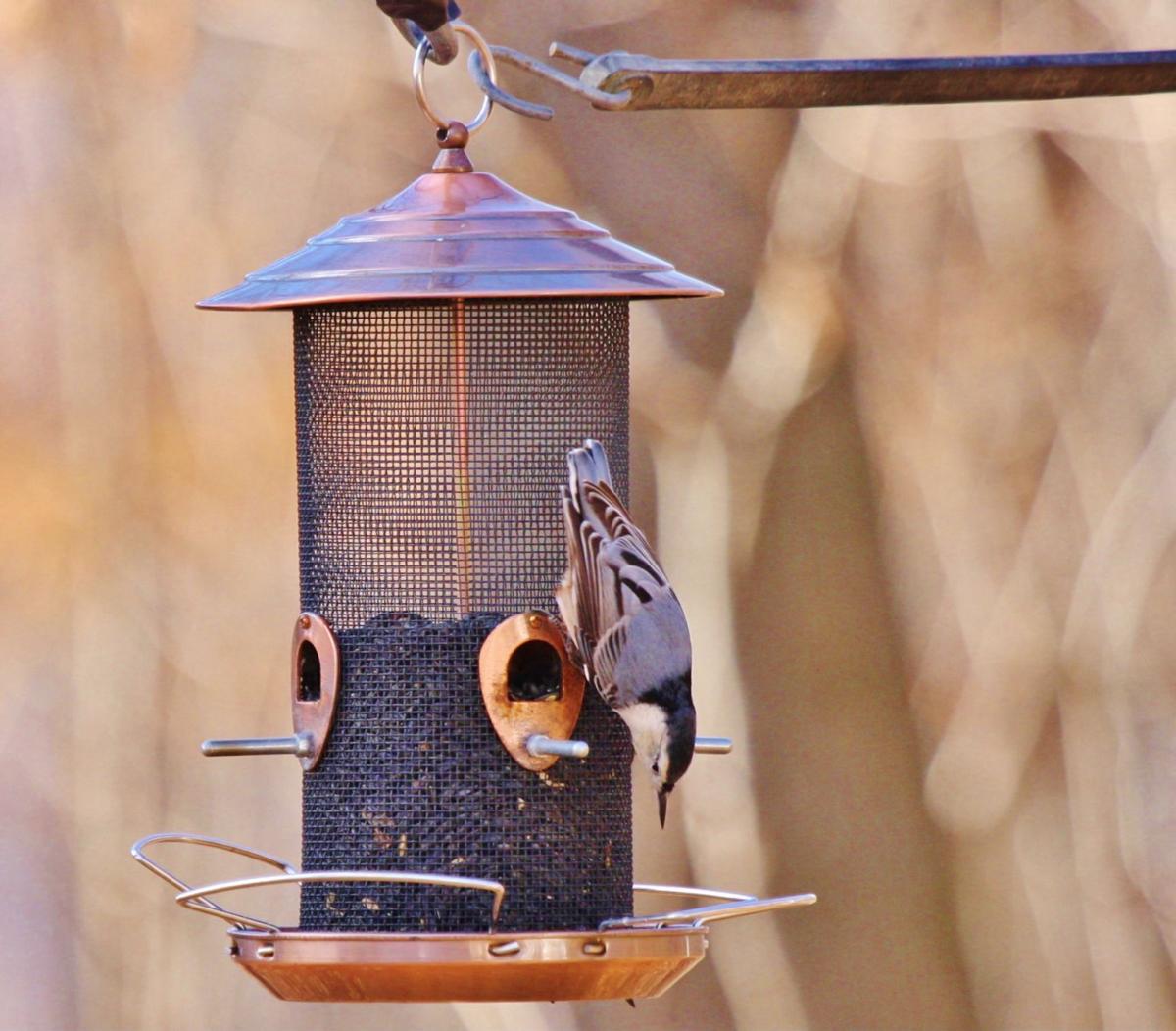 A woodlot nuthatch feeds in its characteristic upside-down manner.

We start to see them after fall has made its mark on the Wisconsin landscape – when trees are mostly bare save for stubborn oaks and ironwoods clinging to leaves. They originated in the Driftless Area region of Wisconsin but have since migrated north.

Anyone who has hills in his or her vicinity might have spotted one or two, but one needs to be sharp to see one.

Like my grandfather would say, “You need the eye of Deadeye Dan to spot one.”

They’re curious-looking herbivores with tenacious personalities. Of course they’re tenacious; they’re born with one leg half the length of the other so they can easily traverse Wisconsin’s hillsides. There are left- and right-legged versions, depending on which leg is shorter. That determines the direction one goes when it circles the hillsides. If a left-legged gouger limited to counter-clockwise travel meets with a righty heading clockwise there’s only one way to solve that problem. They fight till the death to keep their circular domains.

I have my grandfather to thank for my knowledge of the mythological creature known as the Sidehill Gouger. And for him I’m thankful indeed because he was a font of stories and tall tales I’ve carried with me since childhood.

He always told me he’d just as soon spend Thanksgiving sitting on a stump in his woods waiting for a buck to come along so he could take a crack at it with his 30-30. A baloney sandwich and thermos of coffee would suffice for his Thanksgiving fare back in the red-plaid era of deer hunting. He was born in 1898; 100-plus years later and here I am knocking around in his woodlot.

I know folks who claim to have spoken with the deceased. I never have. But maybe they could be speaking through me. It struck me the other day when a friend sat with me at my woodlot around a campfire. He thought he saw a critter about 30 yards away rustling through the leaves. It was no squirrel or chipmunk; it was bigger. He just caught a glimpse of it before it was gone.

With no real planning or thought, the words rolled off my tongue. “Maybe it’s a Sidehill Gouger.”

My friend has been around the block a bit. He’s traveled to many countries and knows folks from all walks of life. He’s read his share of books and written a few himself. But he’d never heard of the creature. Just like that I ran with the tale of the Sidehill Gouger while he listened with his eyebrows raised in skepticism. It ended with a good laugh.

When I became the owner of my woodlot property there were a few things left behind from my grandfather, including his kitchen table. I can still see him sitting at the classic Formica-topped table in the breakfast nook of his farmhouse, wearing a clean pair of pinstripe overalls and a blue denim shirt with the sleeves rolled up showing his work-worn forearms. The leathery skin on the back of his hands had prominent blue veins traversing toward his scarred knuckles like the creek that meandered through his woodlot property.

With his hands folded and resting on his forehead he prayed the familiar “Come Lord Jesus” table prayer over a plate with a can of sardines and a slice of buttered white bread at his elbows. I was a wide-eyed 10-year-old. I’ve loved sardines ever since.

Faced with the task of cleaning my workshop the other day I laid that old kitchen table on its side. It was then I noticed his cursive handwriting underneath it.

Considering his death in 1984 just one year before my marriage, perhaps he figured I was going to be needing a kitchen set so why not his. I’ll never know for sure but I’m the only Greg in the family and we were close.

I guess we can all admit this is no typical Thanksgiving. Many are not with family as they have been accustomed to. The logistics of the pandemic, my wife’s employment in the public-school system and physical distance have me missing my children deeply. But in many ways I think my wife and kids would agree we’ve grown closer in the past half year. And for that I’m thankful.

For I’ve learned from an old country song – “On days when I keep my gratitude high and my expectations low, those are good days friend.”

Have a blessed Thanksgiving.

Neal A. Jorgensen, 85, passed away Dec. 22, 2020, in The Villages, Florida. He was an emeritus professor of dairy science who served the Unive…

A winter man whose head is ice-white with age arose on an early January day to take his faithful canine companion outside. Together they walke…

I have a history with whisk brooms. My father bounced back and forth between being a sales manager at a local Ford dealership where I grew up,…

When I was a young student pastor in Blue River in the early 1970s a neighboring pastor was assigned as my counseling elder. Donna was one of …

“For it is God who said, ‘Let light shine out of darkness,’ who has shone in our hearts to give the light of the knowledge of the glory of God…

Greg Galbraith says he's thankful for ancestors who kept and maintained his woodlot. His uncle built the syrup shack he uses for woodworking and art projects.

Greg Galbraith is scheming to turn a woodlot creature made from bitternut hickory into a rendition of a Sidehill Gouger.

Happy Thanksgiving from the woodlot, where the gnome is always smiling, the nuthatch is fat and happy, and there’s free music everyday if one takes time to listen.

A woodlot nuthatch feeds in its characteristic upside-down manner.