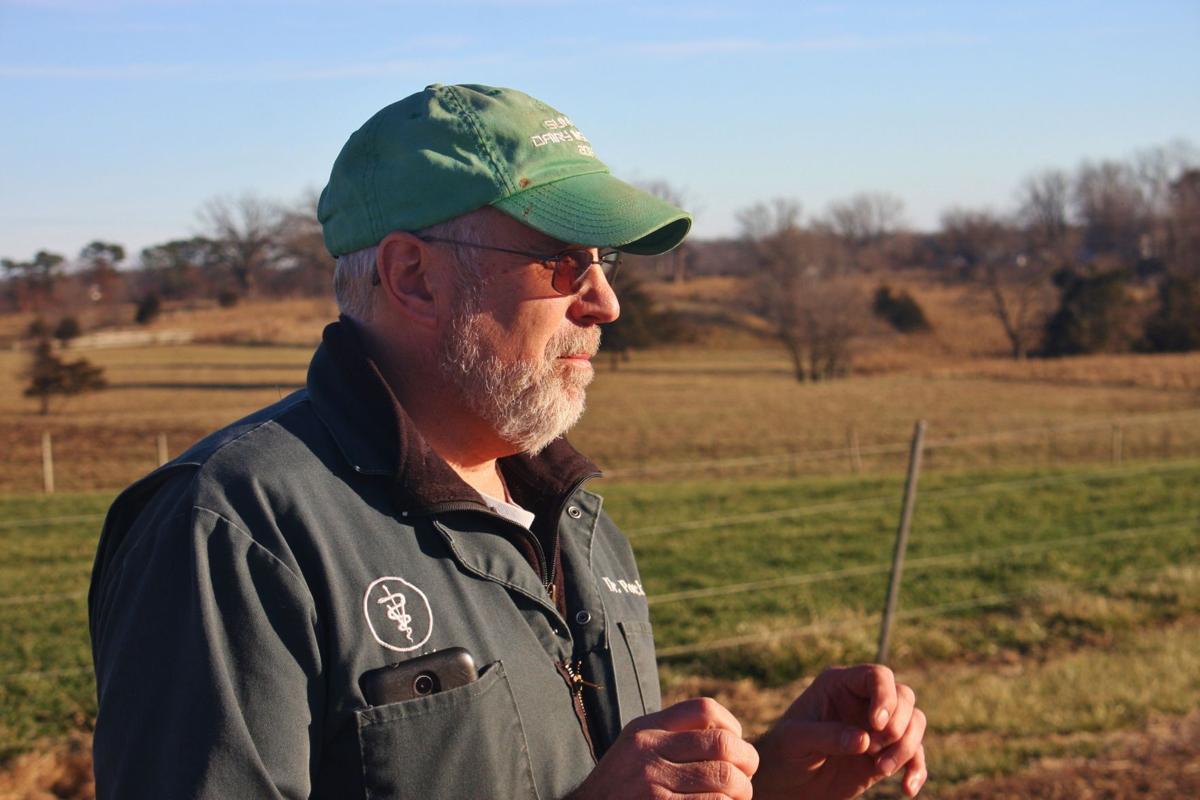 Greg Galbraith's friend Dr. Scott Poock, former veterinarian with the Birnamwood Vet Clinic in Birnamwood, Wisconsin, describes how to cast a cow. Casting is a humane way to effectively force a cow into a lying position to make certain veterinarian practices possible. 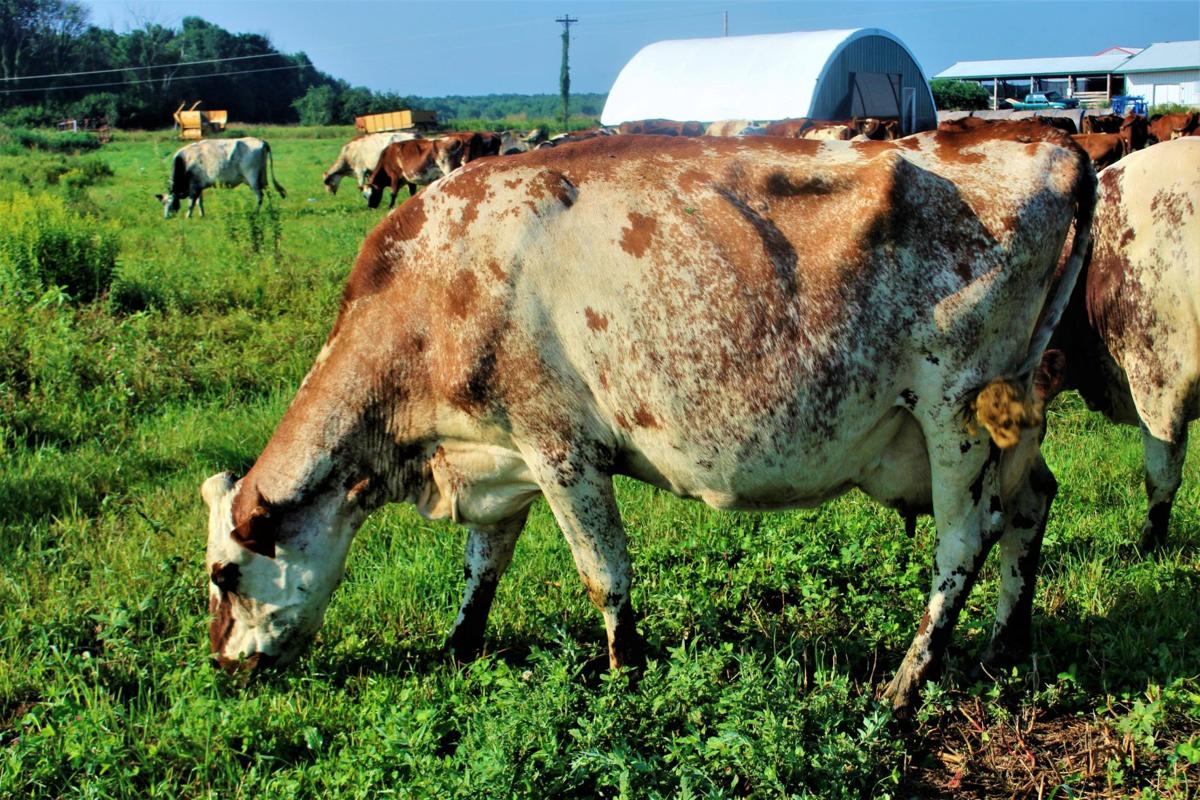 When Greg Galbraith farmed, Gloria was his most approachable cow. But she wouldn't let strangers approach her to try pushing on her.

Greg Galbraith's friend Dr. Scott Poock, former veterinarian with the Birnamwood Vet Clinic in Birnamwood, Wisconsin, describes how to cast a cow. Casting is a humane way to effectively force a cow into a lying position to make certain veterinarian practices possible.

When Greg Galbraith farmed, Gloria was his most approachable cow. But she wouldn't let strangers approach her to try pushing on her.

Try as one may, it’s difficult if not impossible to make a cow lie down unless she’s darn good and ready to do so.

Most if not all large-animal veterinarians have knowledge of using a technique called casting to force a cow into a lying position. My friend and longtime large-animal veterinarian Dr. Scott Poock told me he spent the first three years of his practice living with his grandfather, who milked 20 cows 4 miles southeast of Wittenberg, Wisconsin. One day Poock was telling his grandpa how he’d spent part of his day repairing a prolapsed uterus on a cow. His grandpa proceeded to tell him how his veterinarian had once casted a cow to have her lying down so a prolapse could be addressed. His grandpa retrieved a long shoelace and used one of Poock’s model cows to illustrate how the rope was laced around the cow’s neck and behind its shoulders, with the mainline running along the cow’s topline. It was the exact method Poock had used that day.

“I kept that model with the shoestring on it for many years after his passing as a reminder of him,” Poock told me.

Beyond that method known as casting it’s virtually impossible to make a cow lie down. Allow me now to dispel once and for all the urban myth known as cow tipping. It’s just that – a myth. To put it another way, and to invoke a bovine perspective, it’s B.S. The myth was born in the 1970s and caught more steam in the early 1980s with movies like “Tommy Boy” and “Heathers.”

In my early days of acquiring herdsmanship skills I considered the prospect of cow tipping insulting. Nearly all claims of cow tipping are reported by ruffians on their way home from the bars after closing time. That’s when I was awake and lacing my boots to go milk real cows. I learned early on what it was like to rest my weary head on the warm flank of a stall-bound dairy cow while her yield of “nature’s most perfect food” coursed its way through the milk hose to the pipeline – and ultimately to the bulk tank in the milk house. I’m sure many readers will agree that if anything a cow’s tendency is to lean in to force exerted on her side. In a stall barn or at a headlock when one steps in to work on old bossy she tends to lean right into the worker. That makes the prospect of cow tipping even less likely to be possible. It’s an absurd notion. Let’s destroy this silly myth.

In order to tip a cow one would need to approach her and lay hands upon her. That isn’t happening. Cows are intelligent and intuitive creatures. They have a natural flight zone. And furthermore they don’t sleep standing up. Yes she can be in a deep state of rest but not so deep that she’s going to stand and allow several strangers to start groping at her.

Now I know in every herd there’s a few pets that allow physical contact by their caretakers. Gloria was ours. She was a big deep-bodied Normande cow that would come to my wife, Wendy’s, beck and call to have her neck scratched. Wendy would, in her trained soprano voice, call Gloria to her for a daily exchange of affection. I suppose if a person with his or her post-celebratory buddies could have approximated my wife’s soprano lilt they would have had a chance at coming within touching distance of old Gloria. That is if they made it past the eight bulls we used during our summer breeding seasons.

Cows are also heavy. A fair average weight for a dairy cow is likely 1,400 pounds. All that weight transferred to the ground on four legs makes the notion of tipping her over like a statue ridiculous – and likely harmful to her. The notion that several strangers can push on a cow and that the critter would keep her legs straight and fall over is absurd. Biologist Steven Vogel has determined that just by widening her stance in response to being pushed would make it necessary to use 400 newtons of force to tip a cow. That would take about 14 people. So now the picture becomes abundantly clear. Consider 14 drunken people approach a resting cow in Farmer Brown’s pasture at 3 a.m. She proceeds to sleep deeply while they position at her side to start pushing.

That explains the fact that there’s about 100 YouTube video hits on cow tipping – and not a single one showing it successfully happening. Let the myth die. Let this be the last word. Cow tipping is Bull-Looney.