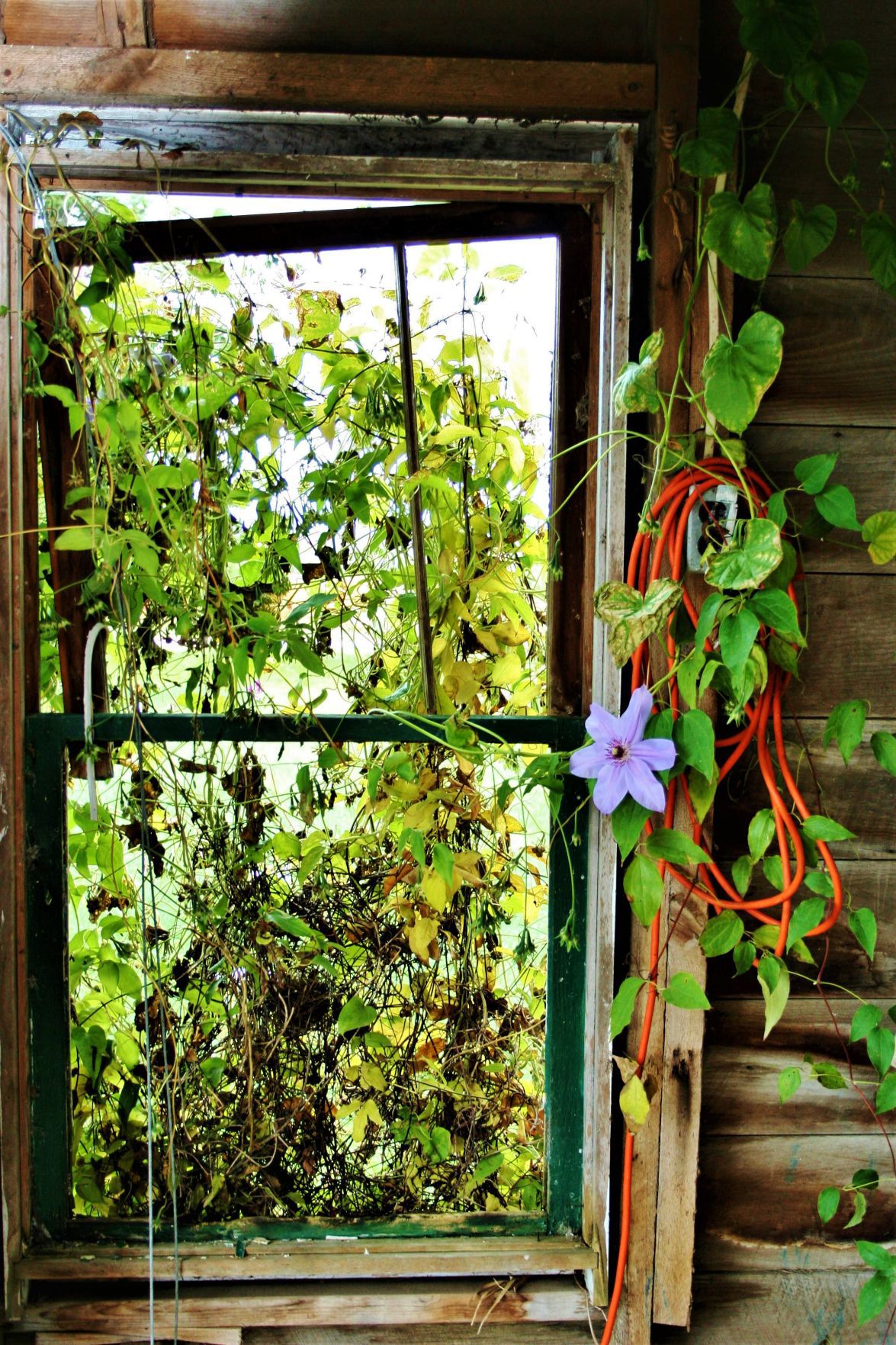 A clematis finds its way to the inside of the summer kitchen at the former Galbraith dairy farm, nicely contrasted with man-made objects. 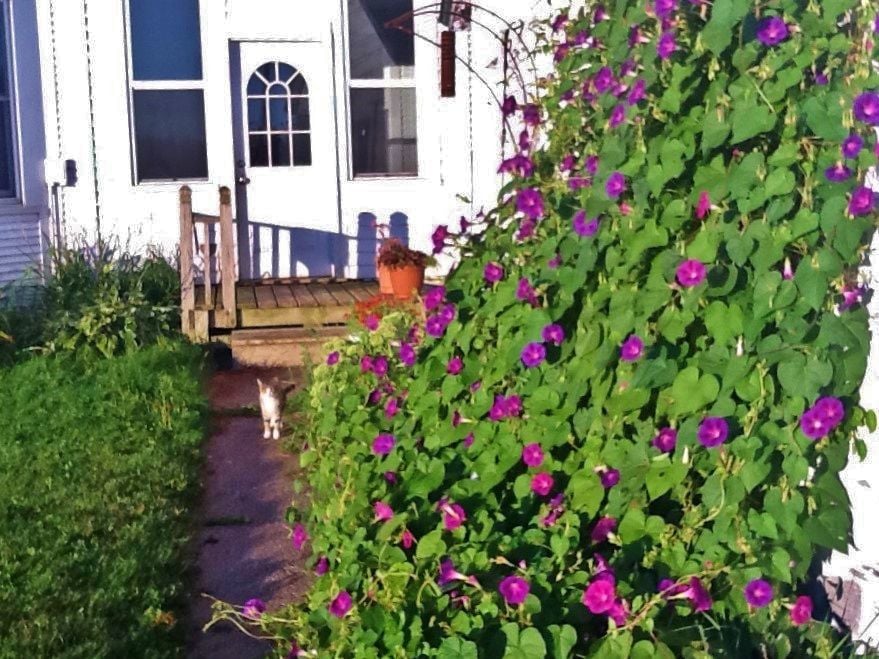 Morning glories love the warmth of southern exposure against the summer kitchen -- as does "Kitty," the farm cat. 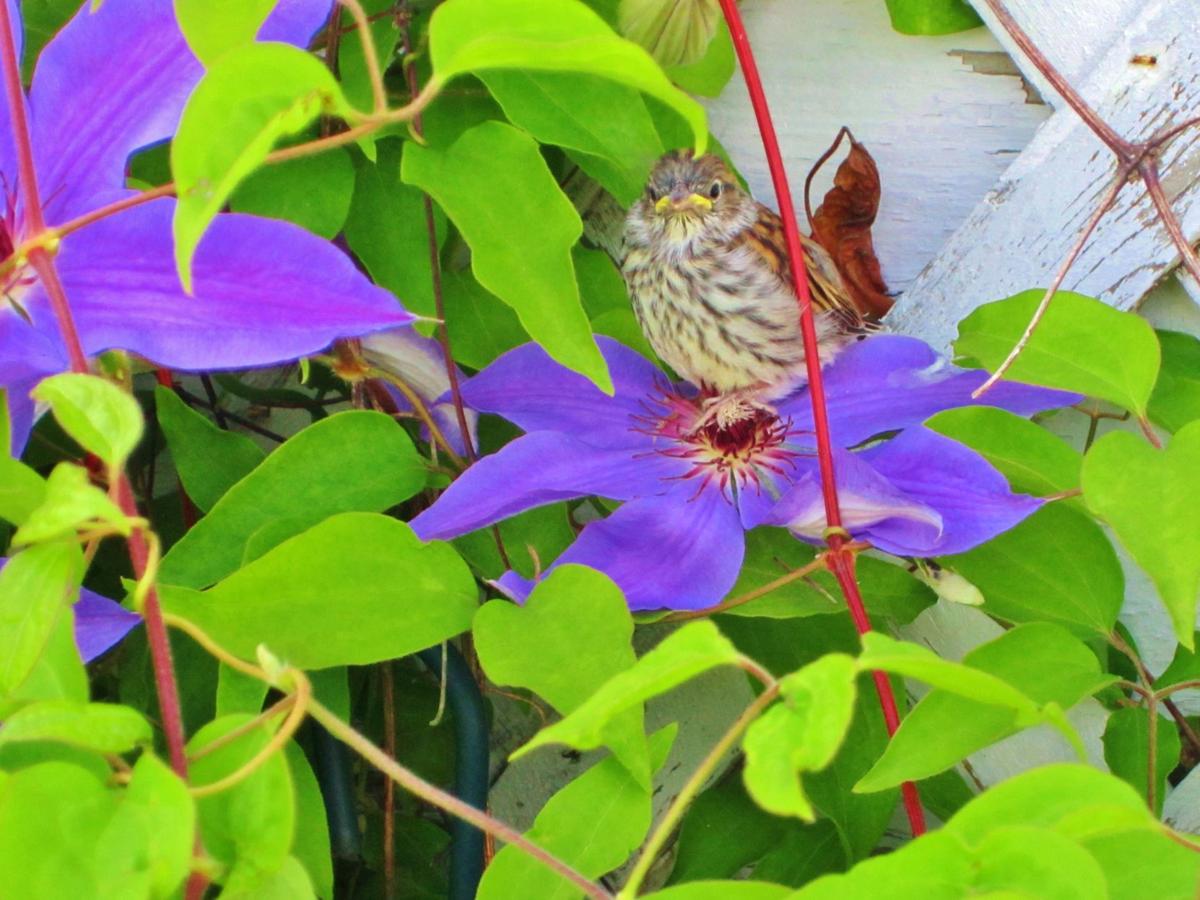 A hatchling finds a clematis flower to use as a perch on the summer kitchen's siding. 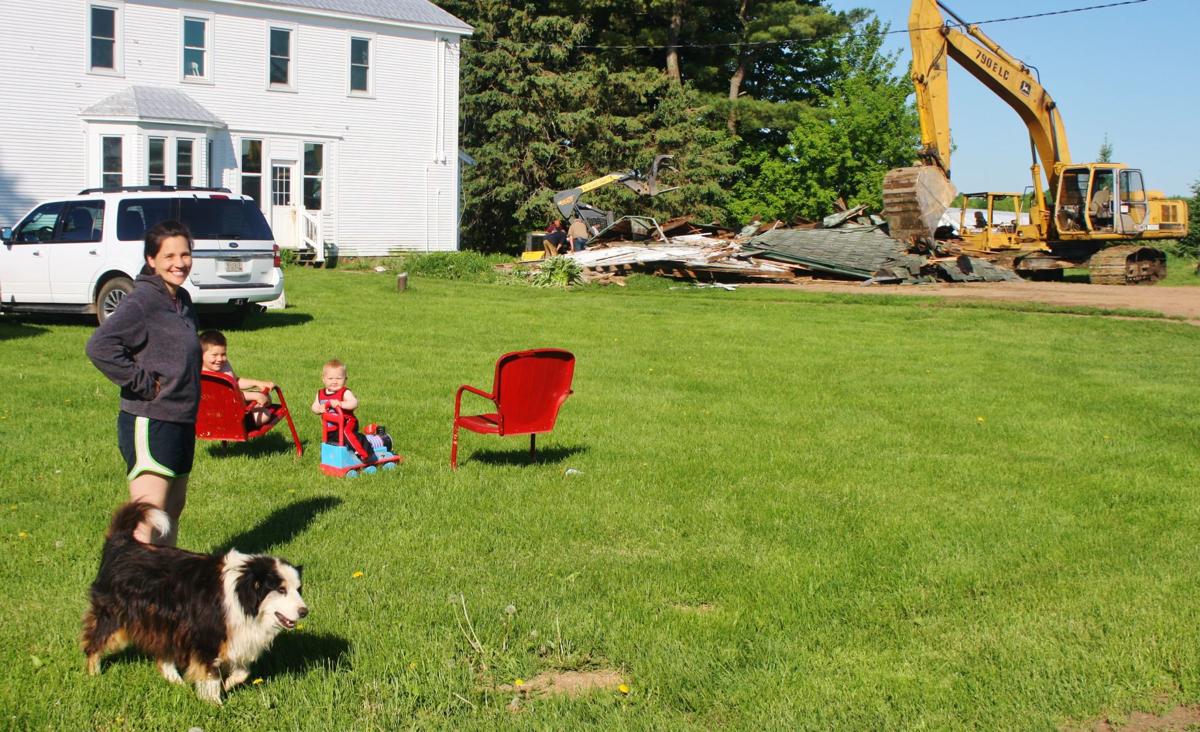 Mindy Cartledge and her two boys Eli, 6, and Oliver, 11 months, watch as the old summer kitchen is dismantled and buried. Jiggs the family dog joins them.

A clematis finds its way to the inside of the summer kitchen at the former Galbraith dairy farm, nicely contrasted with man-made objects.

Morning glories love the warmth of southern exposure against the summer kitchen -- as does "Kitty," the farm cat.

A hatchling finds a clematis flower to use as a perch on the summer kitchen's siding.

Mindy Cartledge and her two boys Eli, 6, and Oliver, 11 months, watch as the old summer kitchen is dismantled and buried. Jiggs the family dog joins them.

Let me set the record straight. This ode won’t be a lamentation. Perhaps soliloquy would better describe it – a discourse in the form of a monologue, a series of reflections heretofore unspoken. The time is right because the old summer kitchen, a seemingly permanent part of my former farmstead, lay in a heap at the hands of a pawing backhoe and iron dozer blade.

Don’t mistake this then as a lament. It’s a nod to inevitable change. What is left are echoes – echoes of those who worked within her walls 100 years ago and echoes of my own past raising a family on a dairy farm in eastern Marathon County. There are echoes of my kids riding their training-wheeled bikes along the walk next to it while carrying a clutch of kittens in a basket attached to the handlebars.

We never much used the summer kitchen. Oh sure we added an overhead door and parked the car in it for a few years. It was a tight squeeze; we quit that when we entered the minivan era. The summer kitchen was cut into six rooms of varying sizes. One had an old clay-tile drain in the floor. One room had a collection of Babcock milk-testing vials used in the earliest days for assessing a dairy herd for milk-solids content. An old Surge Bucket Milker also hung on the wall. It was the type that used a wide leather strap to hang around a cow’s girthy diameter – and that then ran through a long handle on the oblong stainless bucket the milking claw was connected to.

I hung a deer for butchering across its round peeled-wooden rafters more than once before I traded my deer rifle for a camera. For years a portion of a deer’s lower leg hung where I’d left it after my last successful hunt. It may sound gruesome but it seemed to blend in with the austere nature of the simply built structure. A sinuous alignment of bone and tendon beneath a thin hide mimicked the peeled-cedar rafter it hung from. In a sense that’s when the summer kitchen became more of a piece of artwork to me than a building – a type of experiential art that somehow became a part of everyday life. It was also a permanent trellis for morning glories and a clematis my wife established.

I took endless photos of the kitchen. The perspective through the old-fashioned windowpanes whose glass had fallen out long ago was poignant. Windows were like eyes looking out at the everyday life of our young farm family. Occasionally I’d pry off a piece of its weathered drop-siding panels for a framing project. I also hung artifacts from the past on it – cross-cut buck saws and the like. We kept egg layers in it at one point. The side with intact windows made a fair coop. In the main room the initials of a previous owner and his sweetheart was scratched on an oversized 2x4. They eventually married and raised a family on the farm.

The old summer kitchen’s time had come. It had deteriorated and was no longer safe. In its heyday it cooked the meals for a dozen or more daily workers. Kettles rattled and the popping of the woodstove was drowned out by the voices of the workers. In summer they brought in fodder, raising it to the barn rafters with horses pulling roped hay hooks shaped like the talons of prehistoric birds. In winter the labor cut trees in the woods to make lumber destined for barn walls and shed rafters.

The summer kitchen began its life in a purely functional capacity. It aged as an artist, watching the farm evolve from horse-drawn implements to steel goliaths rated by horsepower, torque, integrated global-positioning system and satellite radio.

“I dug up part of the Hosta and salvaged the clematis,” Mindy Cartledge told me.

She and her husband, Toby Cartledge, have been on the farm for a year and a half now. I thanked her and assured her my wife, Wendy, would be happy to hear that.

I told her I had said to her husband at some point in our negotiations during the selling process, “I’ll know things are going well when you get rid of that summer kitchen.”

I haven’t asked them but I’m sure they have plans for the newly vacated spot. I hope to see it happen. I’ll be there with camera in hand.