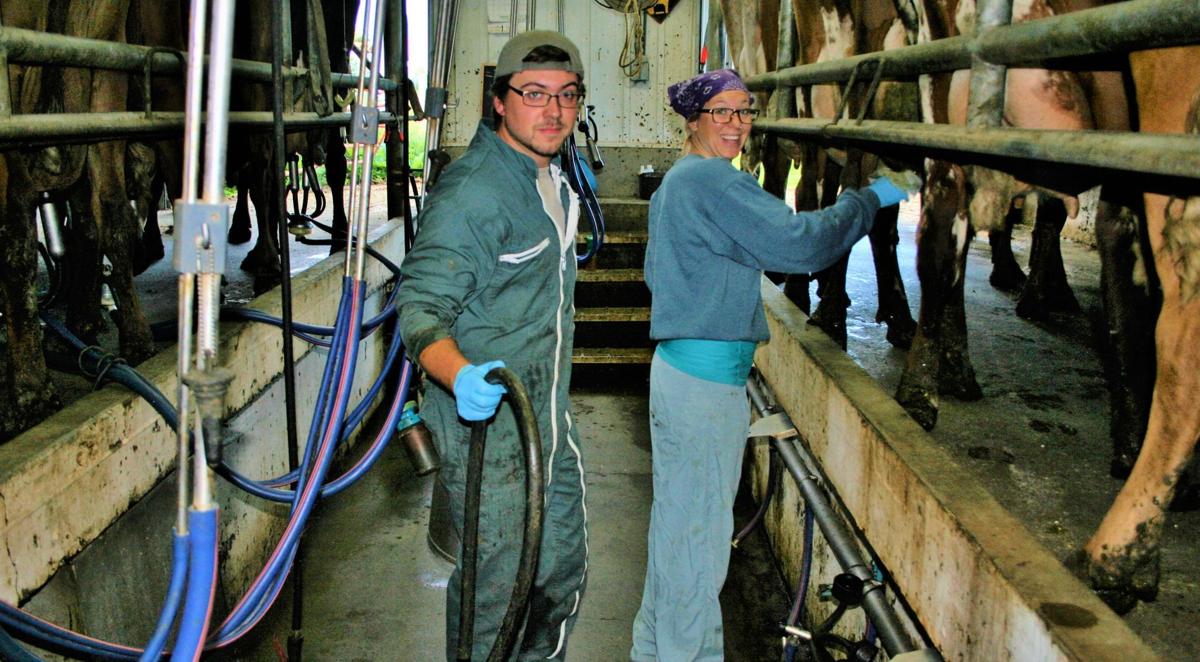 David and Sara Galbraith milk in the parlor. They're not overly concerned about a lack of manure guards. 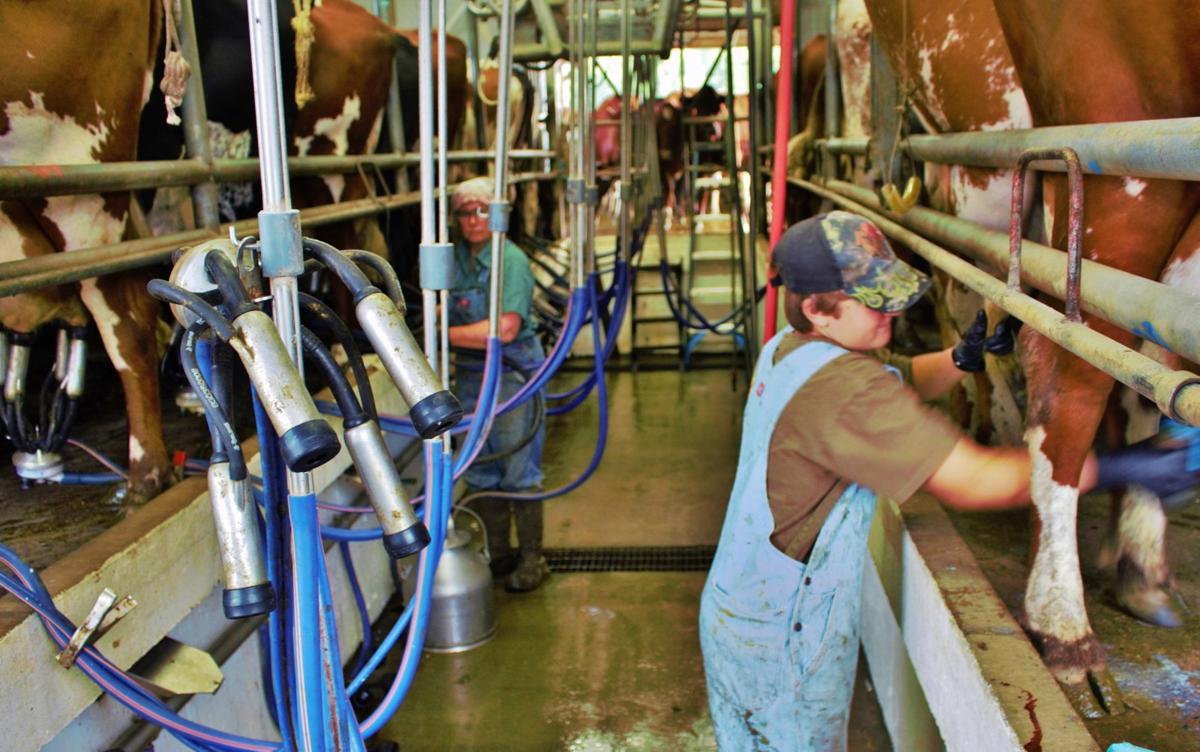 Wendy Galbraith and Lynmarie Hoppe milk cows together. Galbraith says she had many good conversations with neighbor kids who worked for the Galbraiths. 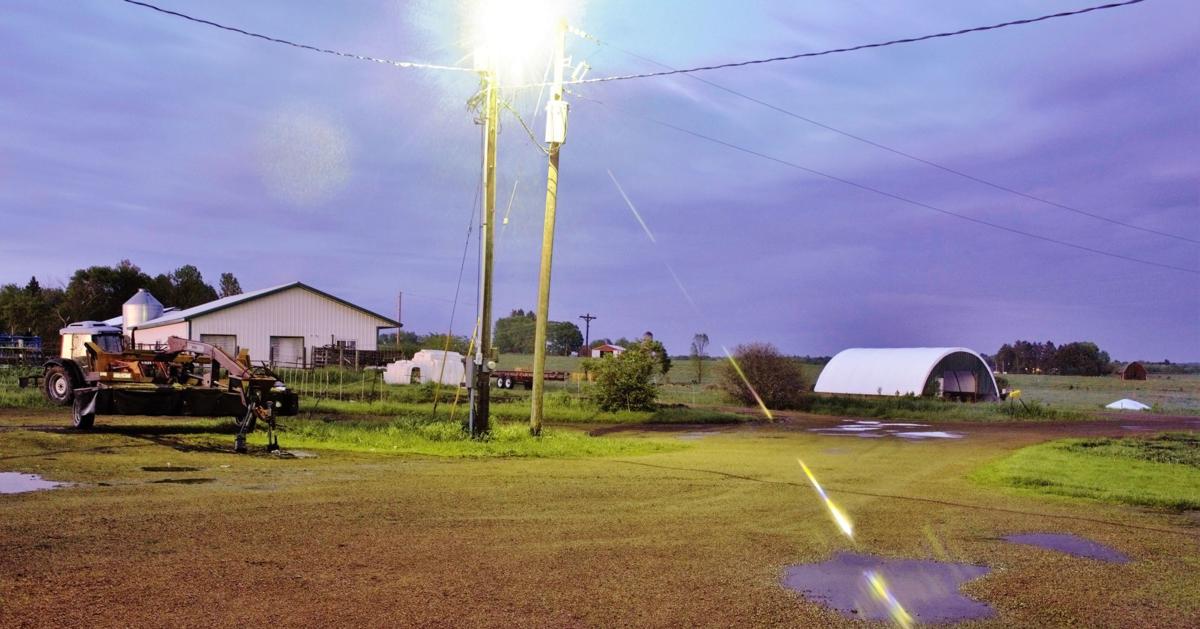 What was the Galbraith milking parlor is small and inconspicuous with little fanfare. But the family could milk 100 cows in an hour and a half in it.

David and Sara Galbraith milk in the parlor. They're not overly concerned about a lack of manure guards.

Wendy Galbraith and Lynmarie Hoppe milk cows together. Galbraith says she had many good conversations with neighbor kids who worked for the Galbraiths.

What was the Galbraith milking parlor is small and inconspicuous with little fanfare. But the family could milk 100 cows in an hour and a half in it.

They come in a variety of styles – walk-through, side-opening, herringbone, rapid-exit, polygon, parabone and rotary to name a few. One of the earliest milking parlors was called a Rotolactor. It was developed in 1930 by the Borden Company.

The first line of the abstract of the 1930 Cow Milking Apparatus – Rotolactor – patent reads, “The object of this invention is to provide an apparatus whereby an indefinitely large number of cows may be milked successively and largely automatically.”

Styles and types aside, I have a question-complaint regarding semantics. The idea that a place where cows are milked is dubbed a parlor is odd to me. Parlor conjures images of people gathering for a cordial and perhaps a Cuban cigar after a fine dining experience.

And because Webster’s first definition of parlor is, “A room in a private dwelling for the entertainment of guests,” I hereby declare there shall be no cows allowed in the parlor.

Ah yes – the defecation proclamation. It was a major consideration in settling on a design for our parlor; despite my assertions I’m giving in to the flawed terminology.

We built in 1997 a New Zealand-style swing parlor. A New Zealand-style swing parlor is a simple barebones parlor. It’s a relatively open-design concept with little in the way of bells and whistles. Ours was a swing-12. There were 12 milking units; while one side is milked the other 12 cows enter the opposite side of the shed to be prepped. The units are swung to the next set of cows while the milked cows exit. Their side is filled again for prepping.

A unit is attached between a cow’s rear legs. A kick rail makes it impossible for milkers to be kicked in the head or torso by the cow. Some swing-parlor owners use manure guards to protect milkers from the inevitable defecation proclamation. We debated this but chose not to for a number of reasons. The most important was that with a manure guard installed I would be unable to do artificial breeding of the cows in the parlor – which is where I always did it during the July and August breeding season. That’s a story for another day.

Milking cows in a parlor with no manure guards lends itself to some good defecation-proclamation stories. I always prided myself on my vigilance in not being in the wrong place at the wrong time. Although prone to acts of random verbal pontifications complete with animated flailing of my arms, I learned that letting those tendencies overtake me in the middle of the parlor during milking was not a good idea. A dairy cow on an all-grass diet can produce a geyser of processed forage that can reach impressive distances.

“Incoming!” was the common warning call our employees soon learned to warn an unwary milker to head for cover. My wife, Wendy, will admit to needing to head for the milkhouse to be hosed off more than once.

I recall one morning when I was alone doing the milking. My mid-calf-high muck boots just managed to catch the full force of a defecation proclamation in such a manner as to fully enter the gap at the boot top. It was fully mixed into my sock and formed a kind of hot slurry at the bottom of my boot – at 101.5 degrees to be exact. Being alone I didn’t have the time to do anything about it so I just accepted it. I figured perhaps I was on the cusp of discovering a cure for common foot calluses.

The defecation proclamation also gave rise to a term we used when no cow would make such a proclamation during the entirety of the milking process. Indeed as the grazing season progressed, and our seasonally calved cows were into the routine of milking, now and then we’d have what we called a no-hitter – a term taken from the language of baseball. But it wasn’t exactly called a no-hitter. An “s” needs to be added to the beginning of hitter. The event was always something to strive for.

True to the nature of baseball, a no-hitter was something we didn’t notice until the process was about half-done. As we neared the end of milking we became more aware of the possibility. But of course that type of no-hitter is completely up to the cows.

As for me, I shall repair to the parlor to contemplate another column piece.