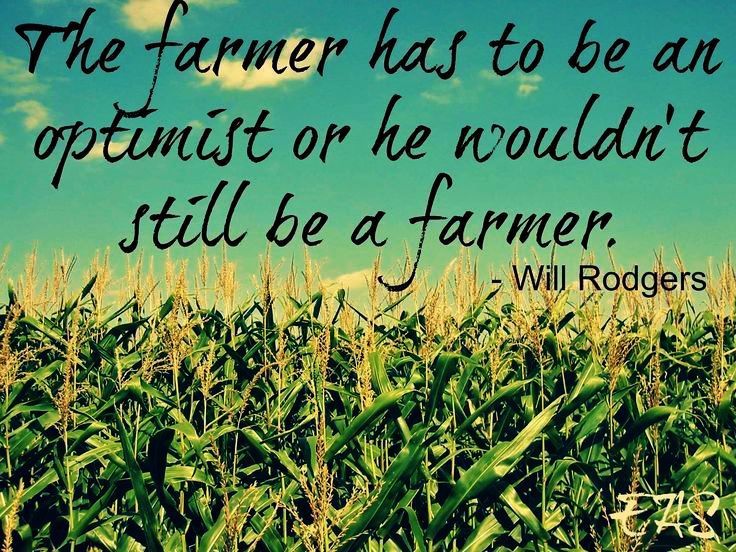 “Hope springs eternal.” When I read these words as a young woman I didn’t fully understand them. Then I married a farmer.

What I soon discovered was that a farmer is an optimistic gambler. Every morning my farmer will rise to greet the uncertainty of the day with a boundless energy of soul. Challenges are ahead and he will meet them headlong.

Over coffee and breakfast every morning we review our agenda for the day. He lists what we need to do. I name the obstacles I foresee with achieving them. His outlook is always overly optimistic. Every task he lists will take twice the time he wants to believe it will. Breathing reality into his plans will only be greeted with more buoyancy from my farmer-husband. With a joke and a laugh we agree to attempt his audacious plans.

At the end of the day we generally agree the day was a success. Even when the catalog of chores is not completed, the tussle to complete it is enough.

What better illustration is there than the planting of his crops? Every thought, every precaution, every action depends on factors beyond his control. But onward he pushes that faith. He holds onto that faith in nature, in science and in our God.

Rich was born into this life, I was not. I had a lot to learn and my dear husband is a most patient man. When he broke both hips at age 13, he learned that patience. Time spent in a wheelchair will do that. He often reminds me that we don’t live in a cardboard box yet, so things aren’t too bad.

In the late fall of 1984 I was married with three children under the age of 5. Unemployment was rampant; jobs were scare and so was money. My first husband had lost his job to plant closure, forcing him to take a poorly paying job. My job was taking care of the house and children, scrimping every day.

Dec. 23 was a Friday that year – payday. My husband’s paycheck was about $70. I could pay the electric bill and the phone bill with it, but nothing else. There would be no gifts for the little ones. There would be no groceries bought. Christmas felt hollow.

Christmas Eve approached slowly in our solemn home. Snow lay in the yard reflecting lights from our neighbor’s light display. I forced cheerfulness for the kids’ sakes.

A rapid knock sounded on the front door. I pulled it open as a hearty “Merry Christmas!” greeted me. A small group of people whom I didn’t recognize were standing in the cold dark night. Beside them was a station wagon.

Upon asking them in they began unloading brown-paper bags full of kitchen staples. Flour, sugar, potatoes, apples and oranges came out of bag after glorious bag. Then came a cardboard box filled with wrapped gifts for the children. Another box of hand-me-down clothing was hauled into our small house. The house was full of blessings!

I asked their names, their organization and their church. They would not divulge any names. My family received a fresh start to that New Year. With the change of the calendar came a new job, further opportunities and personal growth. I started to believe in something greater than the world I knew.

When I volunteer in community events I know someone out there is just like I once was. We don’t need to look very far to see someone in need of assurance. That person’s burden may be alleviated if I can share my own optimism.

The struggles and further hardships of this past year certainly have diminished most of the farmers I know. What I wish to remind all of us who farm is that there is always a future. It may not be the future we have imagined for our farms, but life is not over. It may be starting over.

Ellie Kluetzman moved to a small farm almost 20 years ago; it changed her life. She had a new husband – Richard, a friend of 20 years. Being a mother of three, and soon to become a grandmother, she took a leap of faith. Her eyes have been opened to the beauty of God’s hand in nature and life. She has found contentment on that farm.