Rural areas are defined here using nonmetropolitan counties. The terms “rural” and “nonmetro” are used interchangeably as are the terms “urban” and “metro.” Statistics are calculated from county-level data using the 2013 nonmetro definition provided by the Office of Management and Budget.

Prior to the onset of the COVID-19 pandemic, rural America showed modest signs of a strengthening economy but had underperformed compared with urban areas. Rural population grew by 0.02 percent in 2018-2019, a small increase after six prior years of population decline. But it was still well less than the urban increase rate of 0.6 percent. Rural counties added jobs every year during the past decade but at less than half the rate of urban counties during most years, including 2018-2019 – 0.6 percent growth in rural counties compared with 1.4 percent growth in urban counties. Rural poverty rates decreased from a 2013 rate of 18.4 percent to 16.1 percent in 2018, still well more than the urban rate of 12.6 percent.

The coronavirus COVID-19 pandemic currently besetting the United States, with more than 9 million confirmed cases and 230,000 deaths as of Nov. 1, 2020, has displayed an uneven and constantly evolving geography across the rural-urban continuum. The virus arrived in the United States in early winter and spread quickly in major metro areas. Despite some spread beyond major metro locations, cases remained centered on urban areas during the next several months. 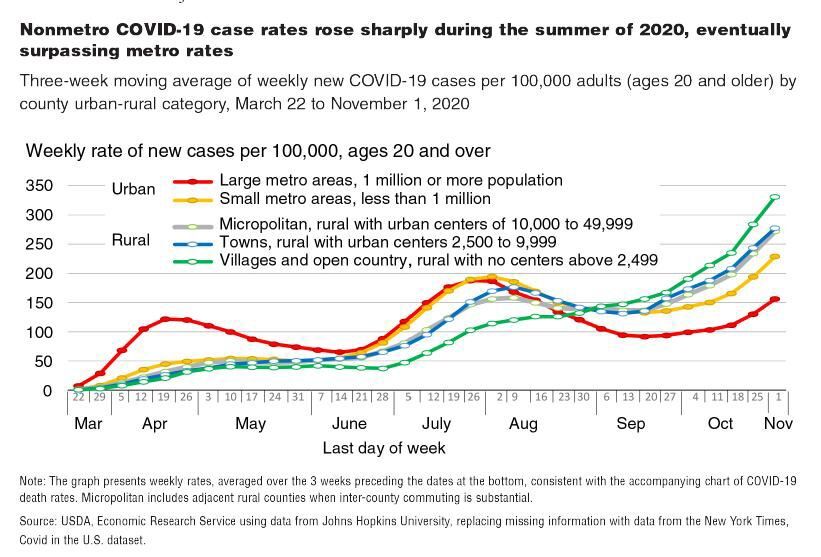 Comparing COVID-19 case rates across time and space is sometimes problematic because infection with the coronavirus can result in a wide range of outcomes, ranging from no symptoms to serious illness and death. Deaths per county adult – because children have so far rarely died from COVID-19 – may provide a better gauge of the extent to which serious COVID-19 infections are affecting the population and the likely demand on rural health-care resources. 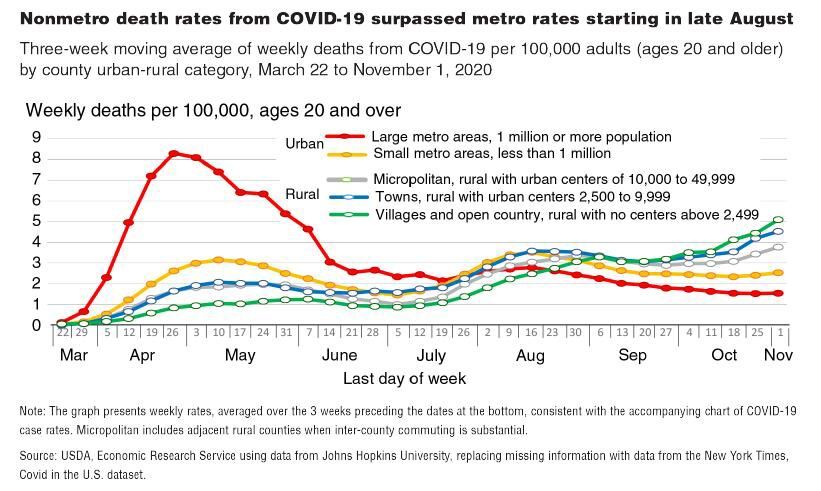 Through time and across urban and rural areas, three COVID-19 death flare-ups are evident.

Several factors likely help explain recent increased rural COVID-19 adult death rates in late October. The first is that rural areas had more cases of infection per 100,000 adults than urban areas in early September. But that’s not the whole story because there were two average weekly rural deaths per 100 cases of infection two weeks prior – to account for lag between infections and deaths – in late October. That was 40 percent greater than the corresponding urban death rate of 1.4.

The rural population appears to be more vulnerable to serious infection in several ways. The Centers for Disease Control and Prevention identified two personal characteristics of people extremely vulnerable to the coronavirus.

People may also be more vulnerable when they have difficulty accessing health care, measured here as lacking health insurance and residing far from hospitals. In each case rural residents are much more likely to live in a greater-vulnerability county – the worst 20 percent of all counties – than are metro residents. 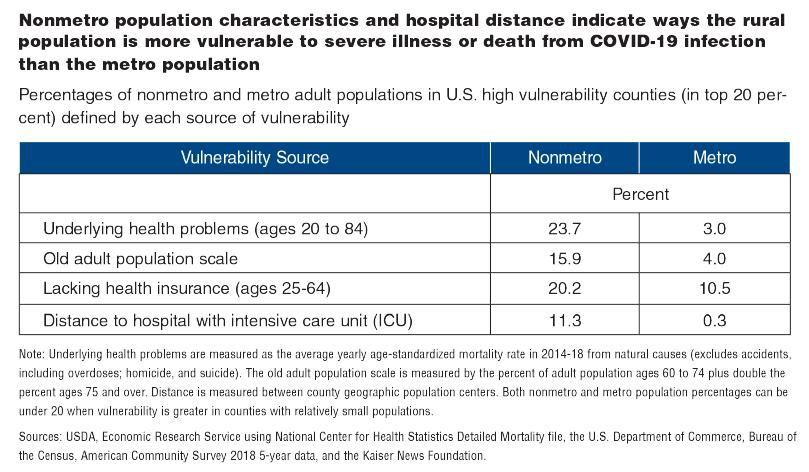 Not all counties have medical-care facilities. In 2016-2017, 116 counties or 4 percent in the United States were without a clinic, a Health Maintenance Organization medical center, a Rural Health Clinic or a hospital to provide basic medical care to residents. Ninety-seven of those counties – 83 percent – are nonmetro, and most of them – 73 counties or 63 percent – are without a town or city larger than 2,500 people. Additionally residents in 22 percent of counties must drive outside the county to receive hospital care, and only 60 percent of counties with hospitals also have an intensive care unit. The majority of counties without a hospital or an ICU are also nonmetro – 67 percent and 77 percent, respectively. 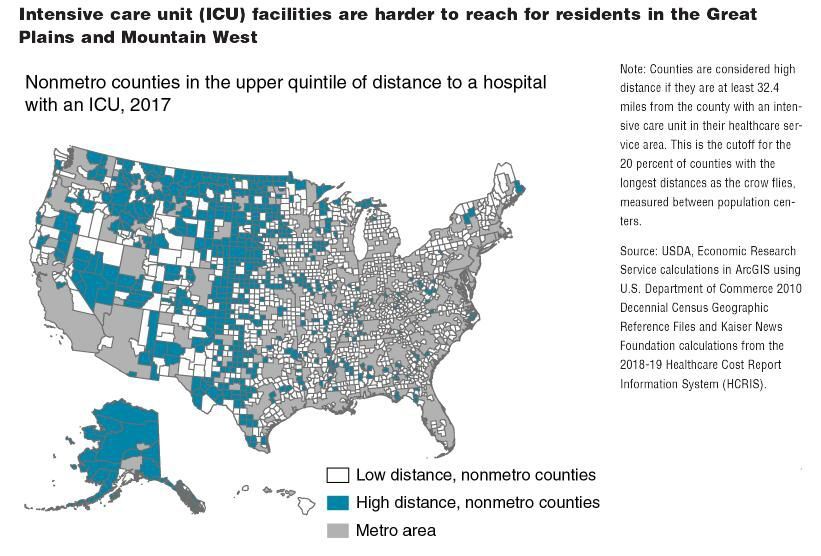 Some COVID-19 patients can quickly develop serious symptoms, and rural residents who are remote from intensive-care hospitals may have difficulty receiving care in a timely manner. The map shows nonmetro counties in the 20 percent of counties with the longest average distance to an intensive-care hospital. On average the residents of those counties are more than 32 miles from such a hospital. People living in those counties, particularly the elderly and those with underlying health conditions, may have worse outcomes for severe cases of COVID-19 due to the difficulty of accessing medical care quickly.

But almost half or 48 percent of those counties had no COVID-19 deaths during the last three weeks in October. Considering only the population in those rural counties that had any COVID-19 deaths, the ratio of COVID-19 deaths to total 2018 deaths in that period was 25 percent. That ratio suggests there may be increased stress on health-care resources in many of those counties, particularly when other counties in their hospital service areas were also experiencing flare-ups.

Prior to the COVID-19 outbreak the unemployment rate in nonmetro areas had followed a 10-year decline, from a peak of 11.5 percent in January 2010 to 3.5 percent in September 2019. After the beginning of the pandemic U.S. unemployment surged to levels not seen since the Great Depression in the 1930s. The nonmetro unemployment rate began to increase in March and peaked at a rate of 13.6 percent in mid-April, not seasonally adjusted 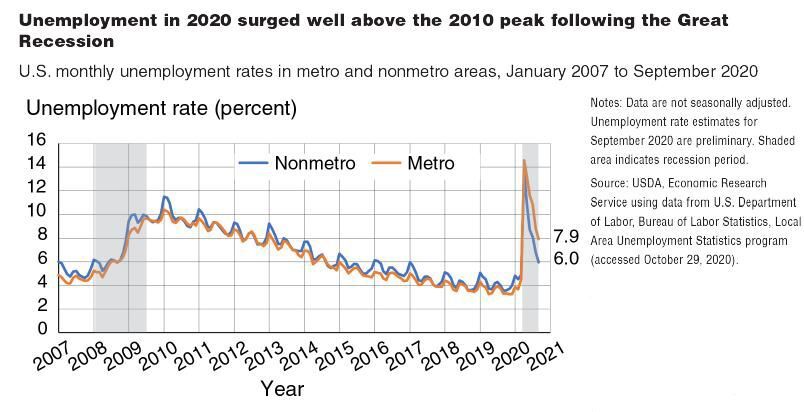 But the unemployment surge resulted largely from government restrictions on non-essential economic activity, social-distancing requirements, voluntary decisions by consumers to limit travel, and other measures applied well beyond initial outbreak sites to help limit the spread of the virus. Some of those restrictions and consumer decisions appear to have had less impact in nonmetro areas. By the week of Sept. 12, the unemployment rate had decreased to 7.9 percent in metro areas and 6 percent in nonmetro areas.

Declining unemployment occurred as the Coronavirus Aid, Relief, and Economic Security or CARES Act, other new Federal laws and the Federal Reserve made trillions of dollars in funds available as part of efforts to address the recession. Several states also relaxed restrictions put in place to control the pandemic and consumers began to increase spending. On any given date the impact of the pandemic on unemployment rates varied across different county types and was in part tied to the dominant economic sector in local economies.

In mid-August nonmetro unemployment rates were greatest in mining-dependent counties at 7.8 percent and the least in farming counties at 5 percent. Nonmetro-county economic types dependent on other industries experienced unemployment rates ranging from 6.4 to 7 percent. That pattern is consistent with national industry trends. The leisure and hospitality sector declined 42 percent between February and April, the largest percentage decline in employment in any major sector during the period. Employment in agriculture declined only 1.2 percent during the same period, helping to explain the smaller unemployment rate in farming-dependent counties. Extreme rates of COVID-19 cases in many nonmetro areas were associated with economic activities that did not shed jobs – most notably farming and meatpacking. 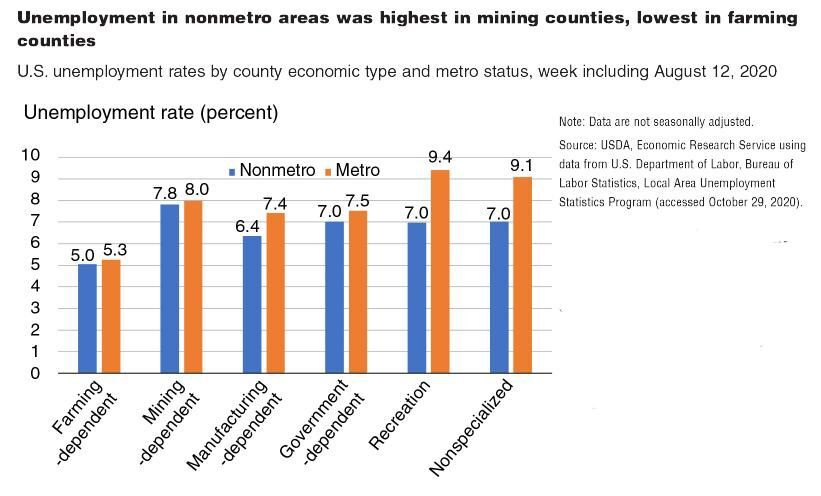 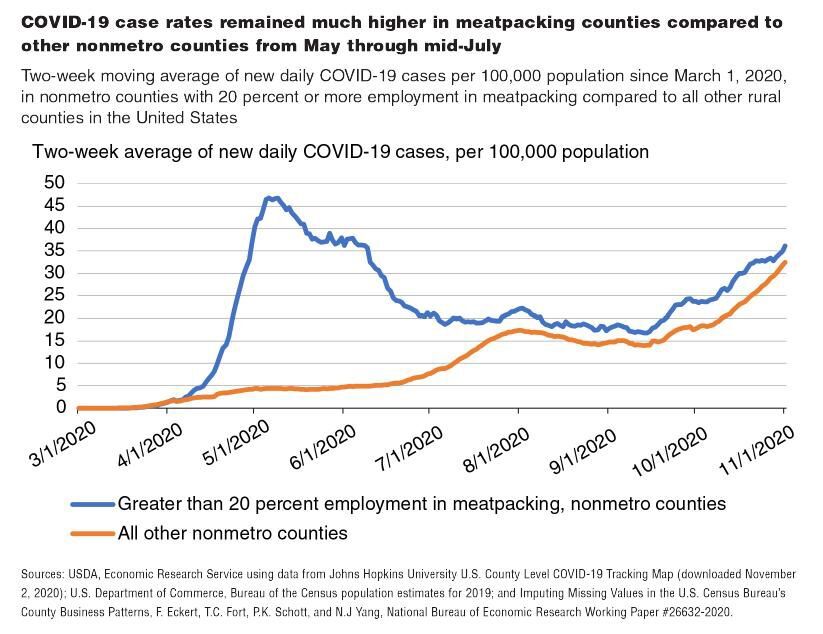 While those counties comprise 2.5 percent of all rural counties and 0.6 percent of urban counties, they represent 19 percent and 2.9 percent, respectively, of all meatpacking employment in the United States. The employment dependence of those counties on a single industry makes meatpacking a unique manufacturing industry in the United States. A manufacturing industry accounts for at least 20 percent of county employment in only 91 other counties. Motor-vehicle-parts manufacturing, for example, employs at least 20 percent of the workforce in 12 counties compared with meatpacking’s 56 counties; other industries have even less geographic concentration. Beginning in mid-April the confirmed number of cases of COVID-19 in meatpacking-dependent counties began to outpace those seen in all other counties across the country.