A pioneer farm family poses in 1889 near Black River Falls in Jackson County, Wisconsin. -- From the Charles Van Schaick collection 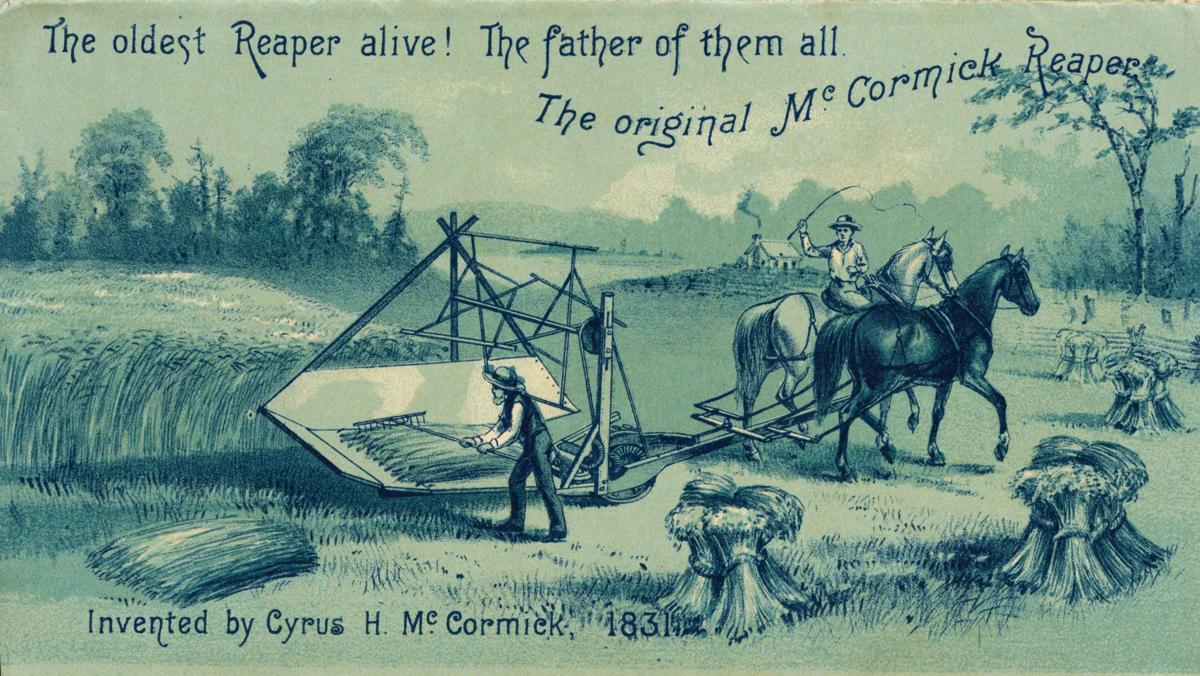 Men harvest grain with Cyrus McCormick's reaper of 1831. The 1887 illustration appeared in an advertising folder produced by the McCormick Harvesting Machine Company.

A pioneer farm family poses in 1889 near Black River Falls in Jackson County, Wisconsin. -- From the Charles Van Schaick collection

Men harvest grain with Cyrus McCormick's reaper of 1831. The 1887 illustration appeared in an advertising folder produced by the McCormick Harvesting Machine Company.

The first pioneer farmers arriving in Wisconsin almost immediately began growing wheat. By the 1850s wheat was already a major crop in Indiana and Illinois.

Joseph Schafer recorded in his 1922 history of Wisconsin agriculture, “The New York farmers, the Pennsylvania farmers, and the Ohio farmers who came to Wisconsin in the early rush of settlement were by habit and tradition primarily wheat growers.”

Some of the earliest settlers in Wisconsin broke and sowed as many as 50 acres of wheat their first year in the state. Once the land was broken they continued growing wheat on the same ground, year after year; many also expanded their acreage each year.

A letter written by F. A. Phoenix, dated Nov. 19, 1842, proclaimed the virtues of Wisconsin’s agricultural lands.

“Our soil and climate are well-adapted to the culture of wheat, but the difference in the surface and climate (between) here and in the east made it necessary to adopt another strategy from that pursued there. We get a first-rate crop – perhaps the best, quality and quantity considered – from the first breaking of the award. The sod is turned over in June, from 2 to 4 inches deep. And then in the latter part of August or first of September (it) is dragged and backset, as we term it, or turned over again, and the wheat sowed (at) 1¼ or 1½ bushels per acre. If sowed early it covers the ground completely and withstands the severest winters. It ripens earlier than the crop on the old ground. (It) is generally rather plumper and cleaner, though it should not be cleaner but it is, as there has been no opportunity for weeds to ripen and fill the ground.”

For those early settlers wheat growing was one arduous task after another – from breaking the ground to sowing the seeds by hand, to harvesting and threshing the ripe grain. Prairie grasses grew 6 or more feet high. With undisturbed root systems as deep as the plant was tall, they proved extremely challenging to break up. With a heavy wooden beam and long moldboard, the breaking plow in common use at the time required as many as 10 oxen to pull it. Farmers worked together to break the land, as no one farmer owned 10 oxen.

An early pioneer in southern Wisconsin described the process.

“Here fields yield this crop year after year, and with most slovenly cultivation … The land is enclosed with a rail, board or ditch fence. It is then broken up with from two to six yoke of cattle. The width of the furrow turned over varies from 12 to 30 inches, and is from 1½ to 3 inches thick … The price of breaking is from $1.75 to $2 per acre. The season for breaking is from the 10th of May till the 10th of July. It is not advisable to break earlier or later than these periods. If it is done later, the sod is very long in rotting and does not produce so well. Corn is sometimes planted on the sod – planted when the breaking is done, at the edges of the furrows. No after culture is given until the corn is cut up at harvest … The first crop (of wheat) is always a certain one, both in quality and quantity – averaging 25 bushels per acre. The land is general plowed immediately after harvest and sown again to wheat.”

In a few years wheat growing became Wisconsin’s major agricultural activity. By the early 1860s wheat had become king. Wisconsin became the number-two wheat-growing state in the nation after Illinois. Growing wheat in the early days was all hand labor, from planting to harvesting. Grain was cut with a cradle, a scythe-like implement, and bound into bundles by hand. On a good day a strong man with a cradle could harvest 2 to 3 acres. One or two bundlers – usually women and children – usually followed the cradler, tying the cut grain into bundles. They then needed to be stood up in shocks so the grain could dry. Imagine with 50 acres to harvest it would take one man 20 days to accomplish the task; the acreage could yield as many as 2,000 bushels of grain. But four men could do it in five days. Thus early immigrants could easily find work on the Wisconsin frontier.

Once the shocked grain was sufficiently dry, the farmer hitched his yoke of oxen to a cart and hauled the grain to a storage place to await threshing. The storage buildings were some of Wisconsin’s earliest wood-frame barns, called English or three-bay threshing barns. They were built without basements.

They were usually 42 to 60 feet long and about 30 feet wide. Storage areas were available on either side of the threshing floor in the middle bay; floor-to-ceiling doors opened on either side. During the days before threshing machines became popular, farmers threshed the grain on the threshing floor – either using a flail or having oxen walk over the grain stalks. Once the grain kernels were separated from the straw and chaff, the farmer raked away the straw. He then tossed the grain kernels and chaff into the air so a breeze could blow away the chaff.

By the 1840s the mechanical reaper had launched a revolution in agricultural technology. Patented in 1834 by Virginian Cyrus McCormick, the reaper was a horse-pulled implement that sliced off the wheat plants using a series of scissor-like cutting knives. The reaper replaced the handheld cradle on most larger farms, although many smaller operations continued to use the much-less-expensive cradle to cut wheat.

At the same time Wisconsin farmers began importing draft horses from Europe, mostly Percherons from France, Belgians from Belgium and Clydesdales from Scotland. Also imported were less-popular breeds such as Shires and Suffolks. Weighing 2,000 pounds or more, draft horses soon took the place of the slow and steady oxen that had done the heavy work and provided transportation on the farm.

With a team of draft horses pulling a reaper, one man could cut as many as 10 acres of wheat each day. But those early reapers merely cut the grain. It still needed to be raked from the machine and tied into bundles, requiring additional human power. But sitting on a reaper and driving a team of horses was far-easier work than swinging a cradle.

McCormick moved his operation to Chicago and began manufacturing reapers in 1847. George Easterly, a Yankee, farmed near Janesville. He invented his own reaper in 1844, which became popular in southern Wisconsin.

John Francis Appleby reduced hand labor associated with the reaper when he invented the knotter. Appleby in 1845 moved to Wisconsin from New York. After fighting in the Civil War he returned home to Mazomanie. He began working on a machine that would tie a knot, with wire and later with twine. With the addition of the knotter, the reaper became a grain binder. It not only cut the grain but formed it into bundles as well.