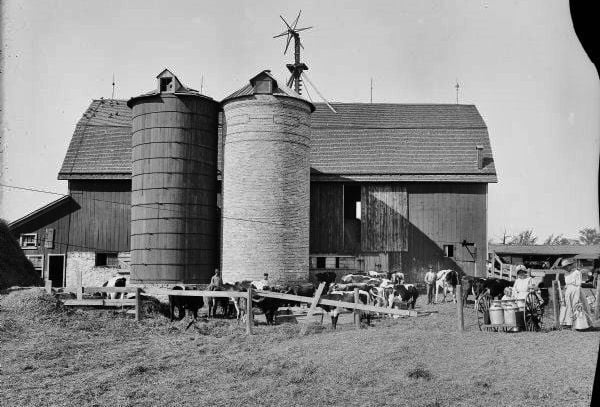 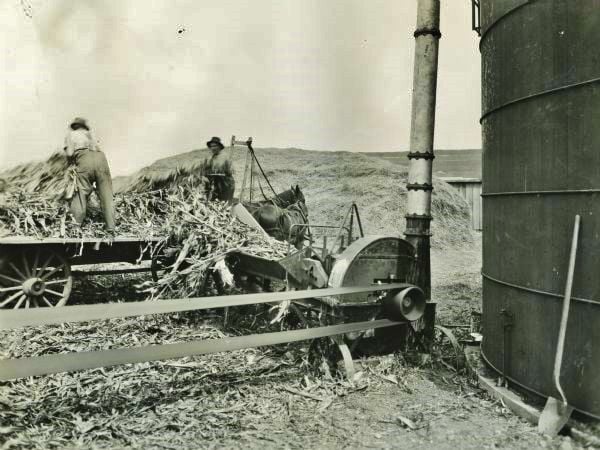 Two men unload silage Oct. 22, 1922, from a wagon into a silo filler on the farm of Adolph Eichherst near Glen Ellyn, Illinois; the silo filler is hooked to a belt for power. The outfit was owned by Reed Roy of Wheaton, Illinois. – Illinois Agricultural Extension Department photograph albums 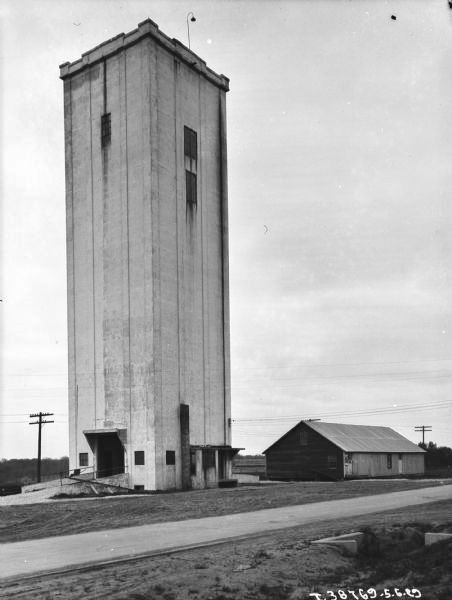 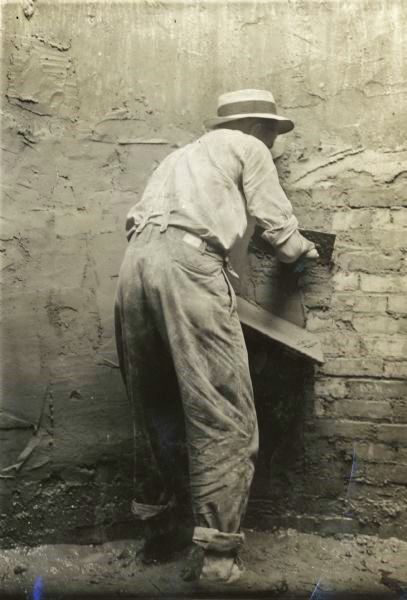 A man spreads cement on the wall of a silo about 1915, location unknown. – McCormick-International Harvester collection 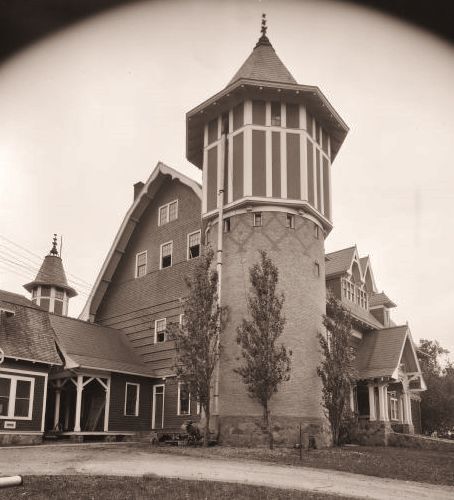 The University of Wisconsin-Madison dairy barn stands next to a silo, Oct. 12, 1926, with a Holstein Safety silage cutter nearby. – Angus B. McVicar photo 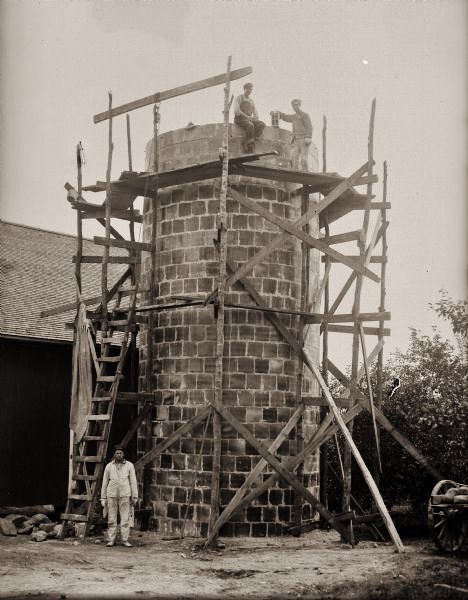 Three men pose about 1900 next to a silo under construction, with wood scaffolding around it, near Black River Falls in Jackson County, Wisconsin. – Charles Van Schaick photo 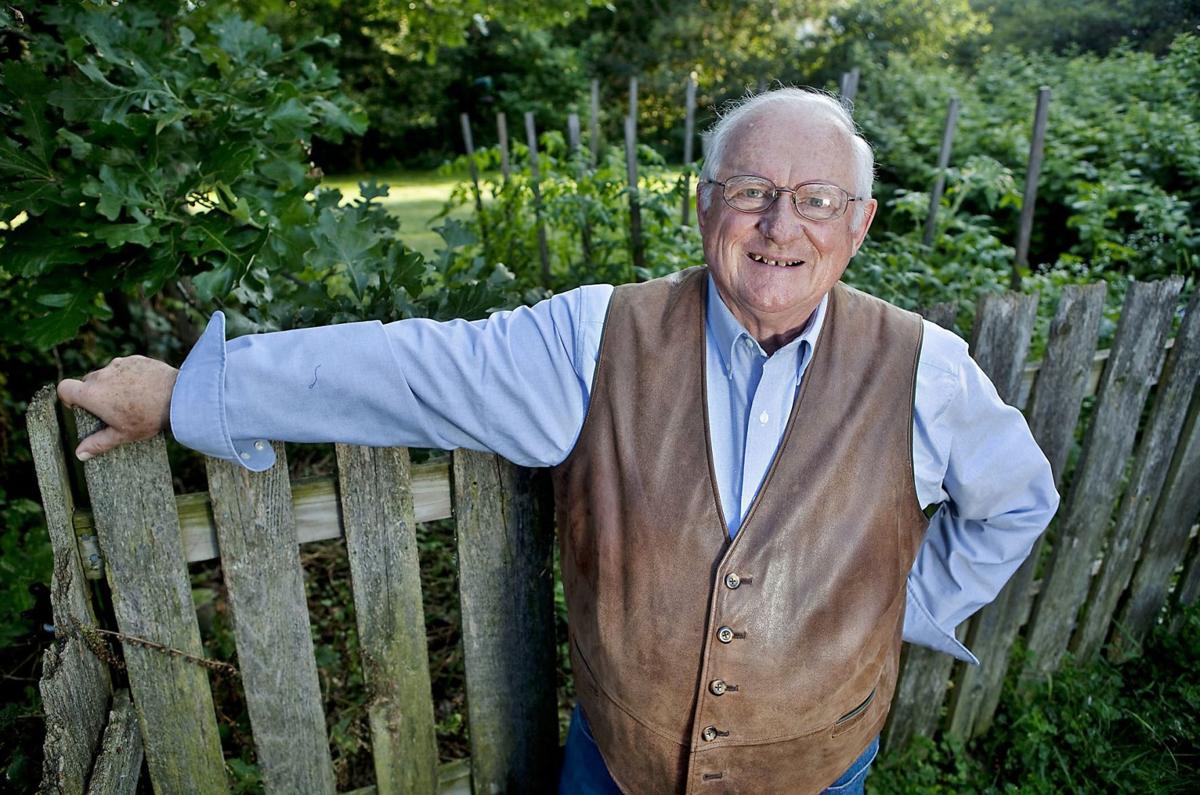 During September on the farm my dad would begin checking the field corn to see if the ears were in the milk stage, and thus ready for the corn to be put in our wooden-stave silo. When he declared the corn ready, he hitched our team of draft horses onto the corn binder and rumbled off to the cornfield. The binder cut one row at a time; it tied the cut corn into bundles and spit them out on the ground.

It was a September evening when Dad called Ross Caves, who did custom farm work, and owned both a tractor and a silo filler. Yes, he would be able to come to our farm the following day. Pa also called several of our neighbors to help with the silo filling, as they had helped with grain threshing a few weeks earlier.

Early the following morning Caves arrived and began preparing the silo filler. Until my brother Donald was old enough, it was my task to steer the end of the silo-filler pipe into the little window that stuck out from the roof of our silo. The task terrified me because I disliked high places, yet from that vantage place I had an amazing view. I could look off across the fields and see the neighbor’s farmstead in a cluster of trees to the south. I could see our cornfields and hayfields, and the stubble that had been a field of oats. I could see our Holstein cattle grazing in the pasture in the far corner of the farm, more than a mile from the barn. I could see the world in many ways from my precarious perch at the top of the silo.

As I clung to the top rung of the ladder I could hear the sparrows that nested under the roof. Their chirping song was amplified by the huge black expanse of the empty silo. With one hand I wired the filler pipe into place and then climbed slowly down the ladder.

Soon neighbors gathered with teams and wagons. They hauled loads of green cornstalks to the silo filler, which was pushed against the silo wall. I could smell the rich aroma of harnesses, sweaty horses and fresh-cut corn as the tractor powering the filler sputtered to life.

“Whoa!” the driver yelled to his team when his wagon was next to the filler. The horses shied a bit when they pulled alongside the noisy machine. The farmer, his shirt soaked with sweat, climbed off the wagon and began shoving long stalks into the ever-hungry silo filler. The machine chopped the corn and blew the pieces up the long filler pipe into the silo, where they rained down like hail.

The neighbors fed load after load of stalks into the machine until late in the afternoon. I was working in the silo to pack the silage down. I pushed a handful of cut corn out the silo window to signal when the silo was full.

The crew filed into the house, where the table was spread with heaping bowls of steaming mashed potatoes, platters of canned meat, stacks of homemade bread, and at least three kinds of pie plus a cake or two. The next day the neighbors returned for a couple of hours to refill the silo because overnight the silage settled several feet.

For many years that was the procedure used in filling silos on Wisconsin farms. Currently, with the advent of forage harvesters, much of the handwork in silo-filling is gone. Gone also are the silo-filling crews, comprised of neighbors who went from farm to farm until all the silos in the neighborhood had been filled.

But the silos remain. For every Wisconsin dairy barn there is likely at least one silo standing nearby; some farms have as many as six or more. Through the years silos have continued to be popular feed-storage structures, particularly for corn – and in recent years for legumes and grasses as well.

In the long history of agriculture in this country silos are relatively new, not coming on the scene until the late 1800s. Levi P. Gilbert of Fort Atkinson is claimed to have built in 1877 the first silo in Wisconsin. His silo was a trench silo -- 6 feet deep, 6 feet wide and 30 feet long. His idea of preserving a crop in an underground trench caught on slowly in this country.

Even with the excitement generated about silos, shared by farmers who had them, silos were not readily accepted. Some farmers argued that feeding silage would cause cows to lose their teeth, that it would eat out their stomachs and that it would cause trouble at calving time. Most of those farmers didn’t own silos. One farmer who did have a silo claimed silage made his cows drunk, causing them to stagger about.

But the biggest argument against silage was that it severely affected the quality of milk. “Feed silage and lose your market,” was the cry heard around the country and particularly in Wisconsin. Many people believed that rumor about milk quality. In some communities creameries refused milk from farmers who fed silage to their cows. As late as 1905 certain creameries in Rock and Walworth counties refused to accept milk and cream from farmers who fed silage.

The power of rumor and prejudice held back the advancement of that revolutionary idea for storing cattle feed during the long winter months, at a time when having sufficient feed on hand was often a problem for the Wisconsin farmer.

By 1887 the University of Wisconsin-College of Agriculture was doing considerable research on silage and on the various varieties of corn suitable for silage. By 1889 the author of “The Wisconsin Agricultural Experiment Station Bulletin 29” estimated Wisconsin had about 2,000 silos. Most silos were constructed of wood, upright and rectangular.

Spoilage was a great problem in those early above-ground silos because air would become trapped in the corners and often leaked through the board sides, causing mold to develop. Providing enough weight on the silage when it was first put into the silo was also a problem. Farmers finally realized that by making their silos taller, the weight of the silage itself would serve to pack down the material. A few of those rectangular wooden silos may still be found in Wisconsin.

Spoilage continued in the tall rectangular and square silos because of the corners. The next step was to board across the corners with straight boards, making an octagonal silo. That led to a round silo, which became popular in the early 1900s and is now the shape of most silos.

Professor F. H. King of the Wisconsin Agricultural Experiment Station is credited with developing in 1891 the first successful round or cylindrical silo. It became known as the King or Wisconsin Silo. It had horizontal wooden siding, with the interior wall separated from the exterior wall with an air space. With that development the commercial silo industry began.

In the early 1900s poured-concrete silos came on the scene in large numbers. Currently many poured-concrete silos may be found around the state. Other building materials followed – concrete stave, tile, brick and even metal. In 1915 the Wisconsin Department of Agriculture reported 55,992 tower silos in Wisconsin. About half were of wooden construction. By 1923 the number of silos reported in the state had grown to 100,060. Wisconsin led the nation with the number of silos on its farms.

Travelers driving along U.S. Highway 53 through Ettrick, Wisconsin, are greeted by a welcome sign adorned with a majestic eagle that reads, “W…

Two men unload silage Oct. 22, 1922, from a wagon into a silo filler on the farm of Adolph Eichherst near Glen Ellyn, Illinois; the silo filler is hooked to a belt for power. The outfit was owned by Reed Roy of Wheaton, Illinois. – Illinois Agricultural Extension Department photograph albums

A man spreads cement on the wall of a silo about 1915, location unknown. – McCormick-International Harvester collection

The University of Wisconsin-Madison dairy barn stands next to a silo, Oct. 12, 1926, with a Holstein Safety silage cutter nearby. – Angus B. McVicar photo

Three men pose about 1900 next to a silo under construction, with wood scaffolding around it, near Black River Falls in Jackson County, Wisconsin. – Charles Van Schaick photo