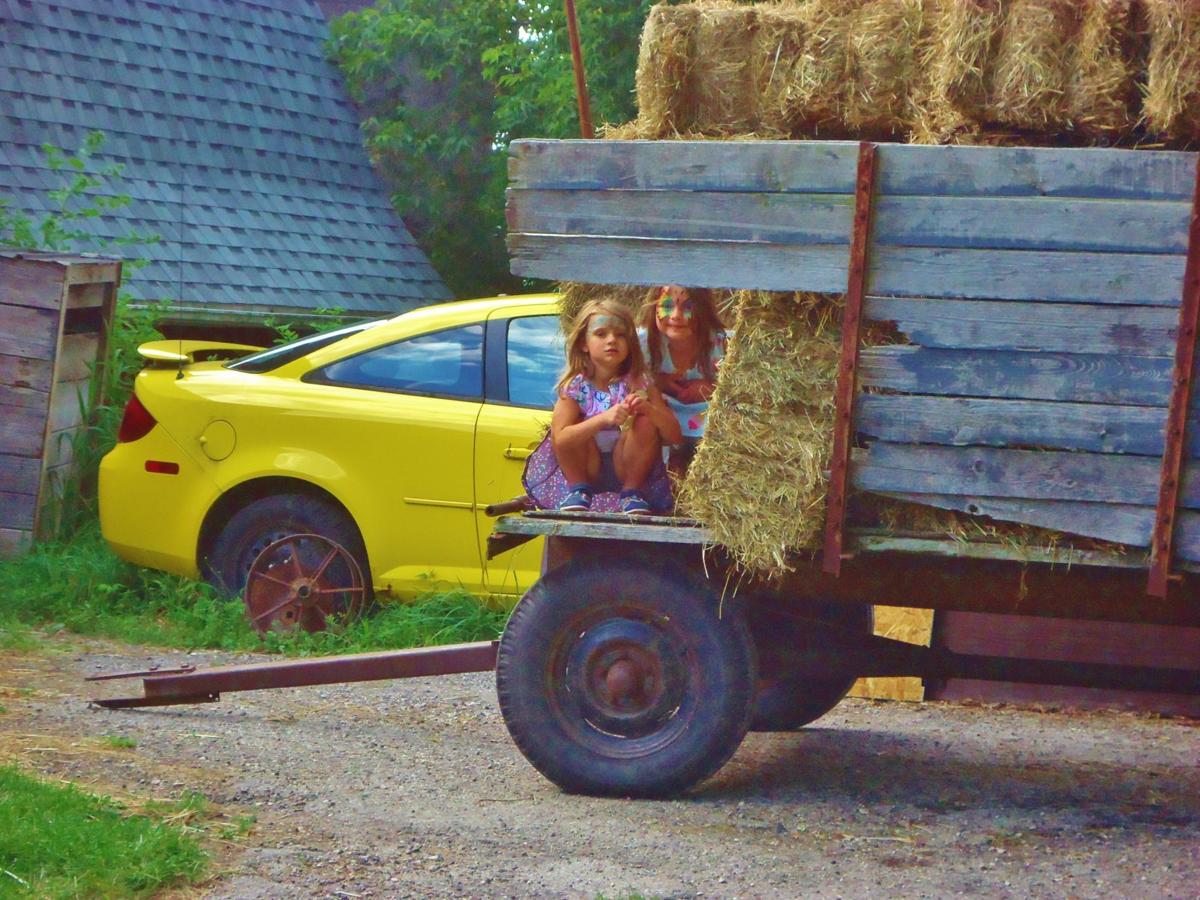 Next-generation granddaughters Faith and Grace join the action, learning how to unload hay. 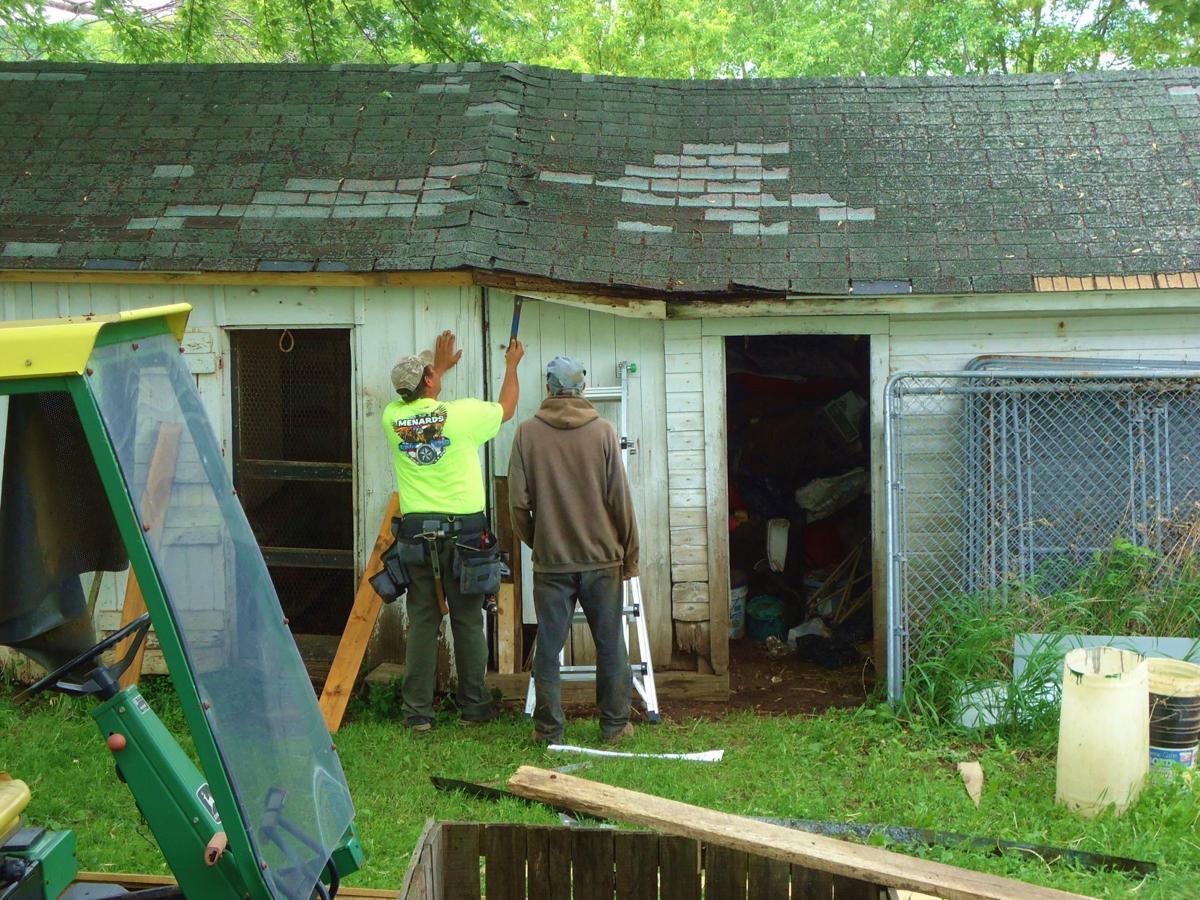 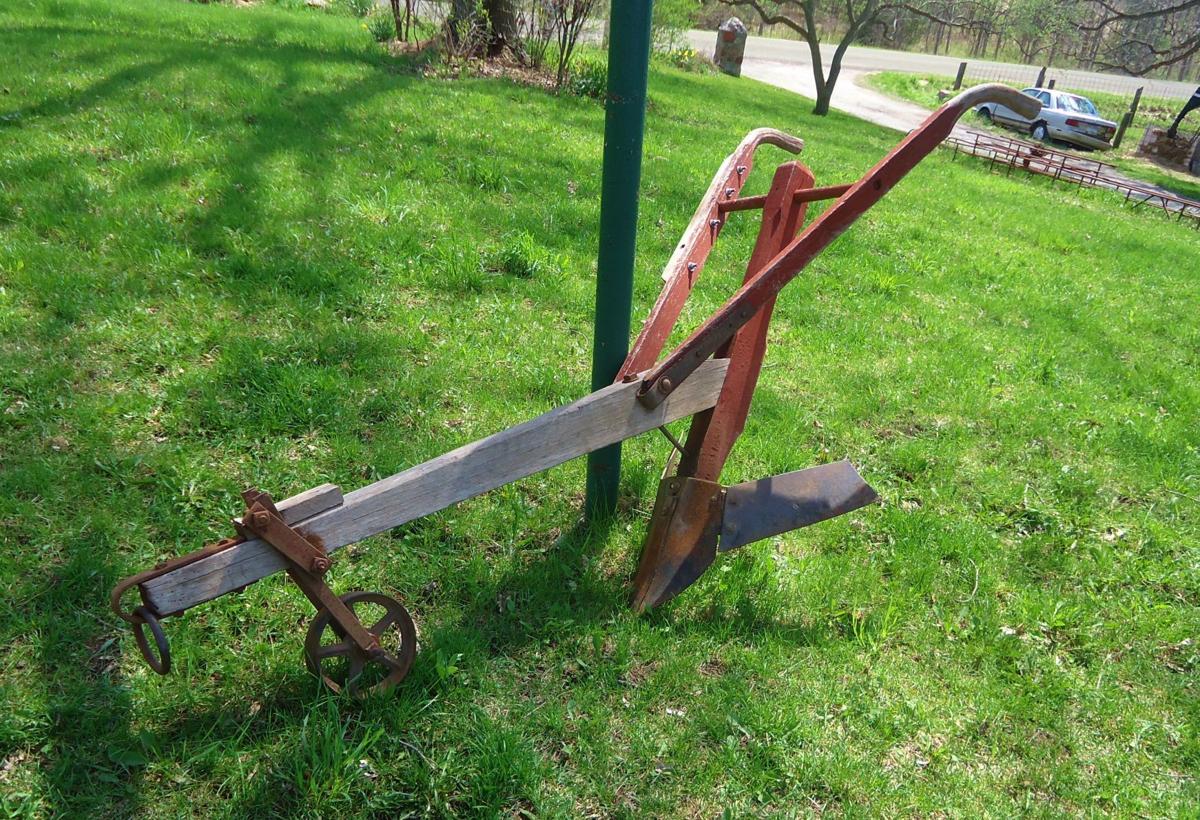 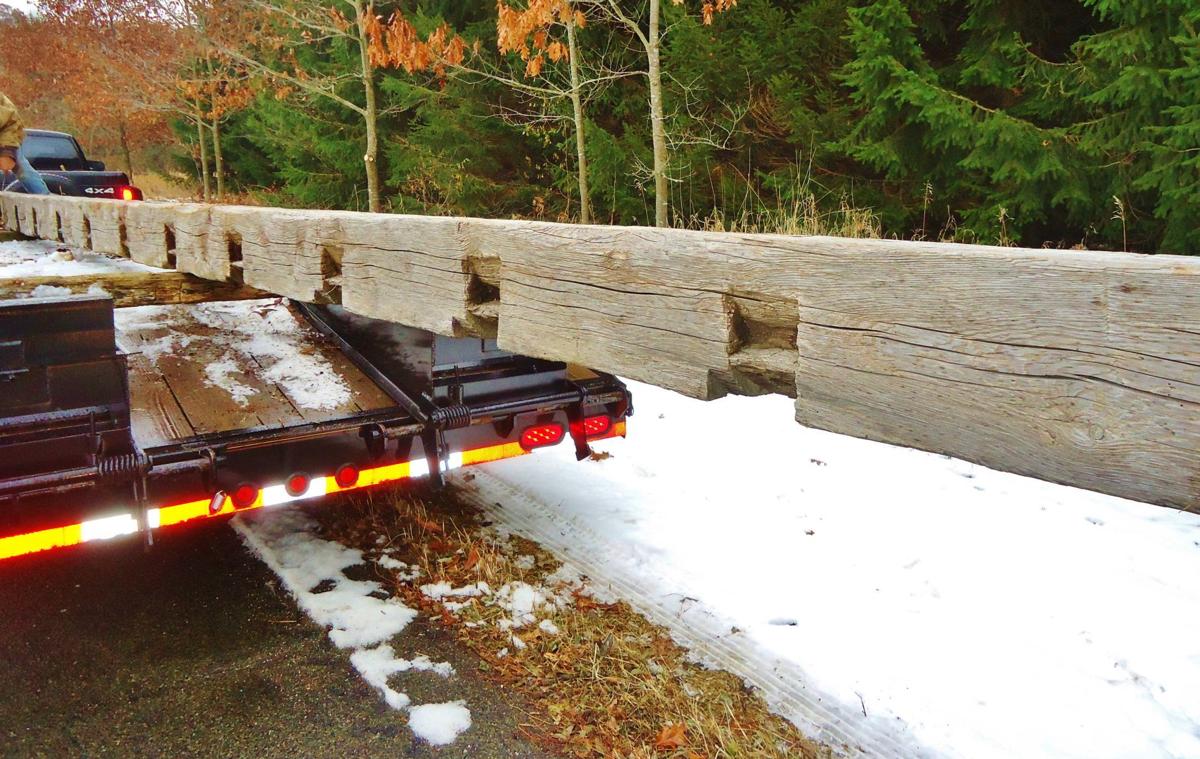 The Sterns reclaim the main beam of a neighbor's demolished barn, to sell. 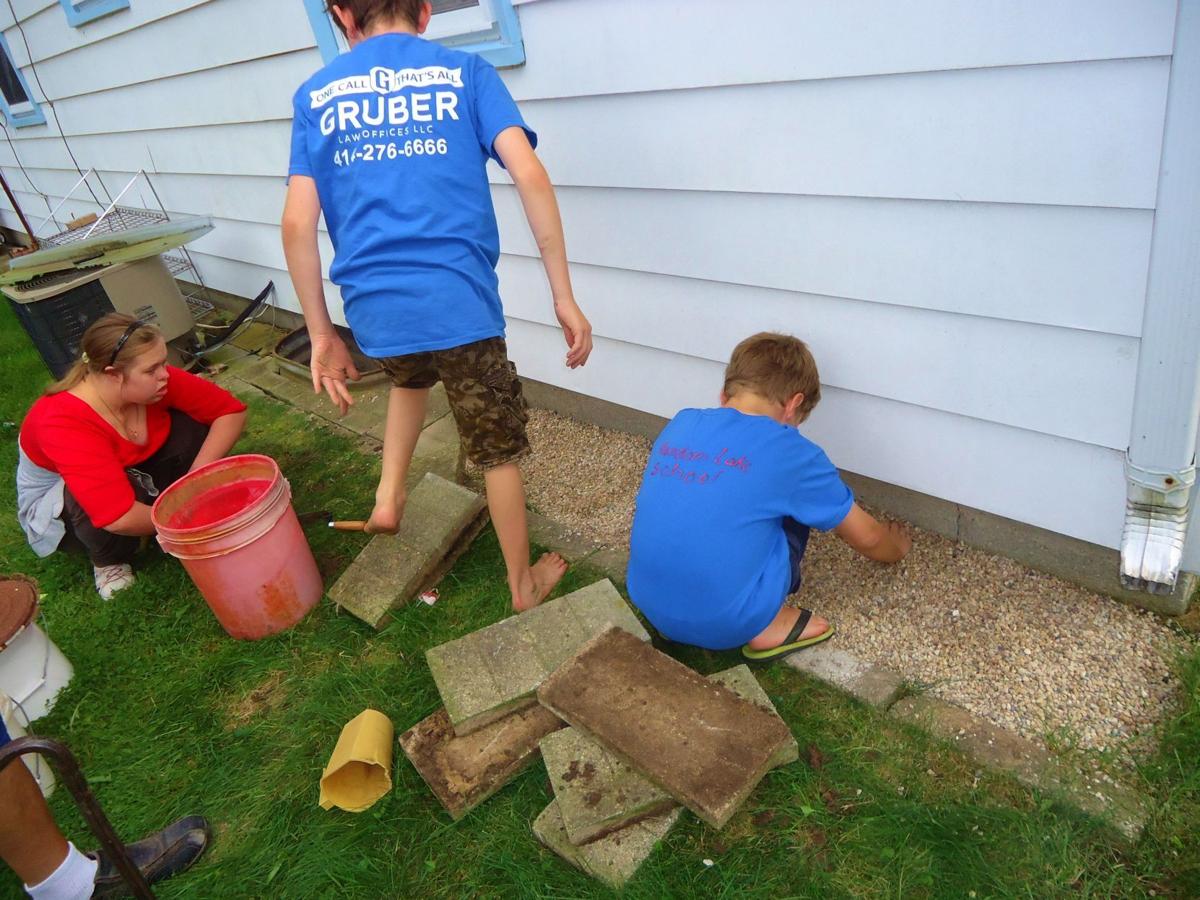 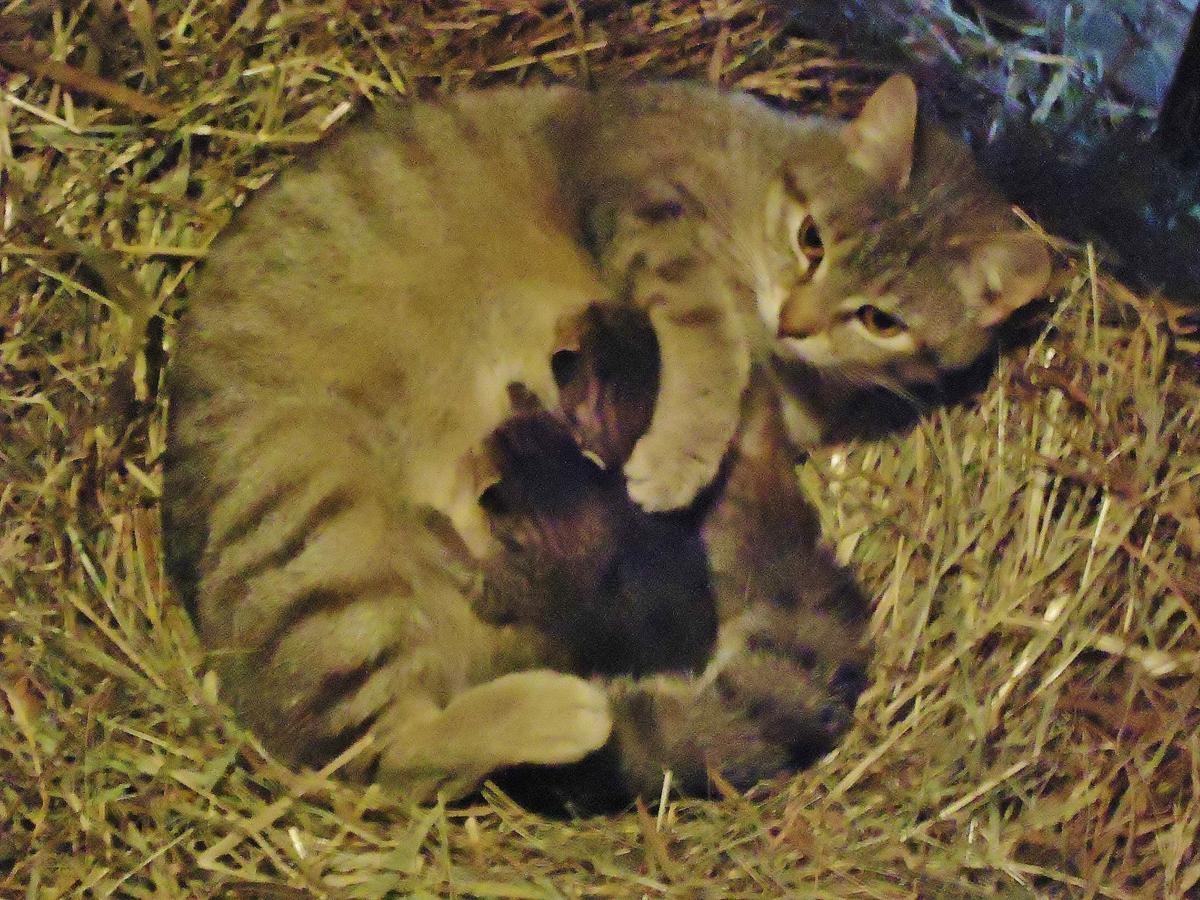 Sassy produces a new generation of kittens to snuggle. 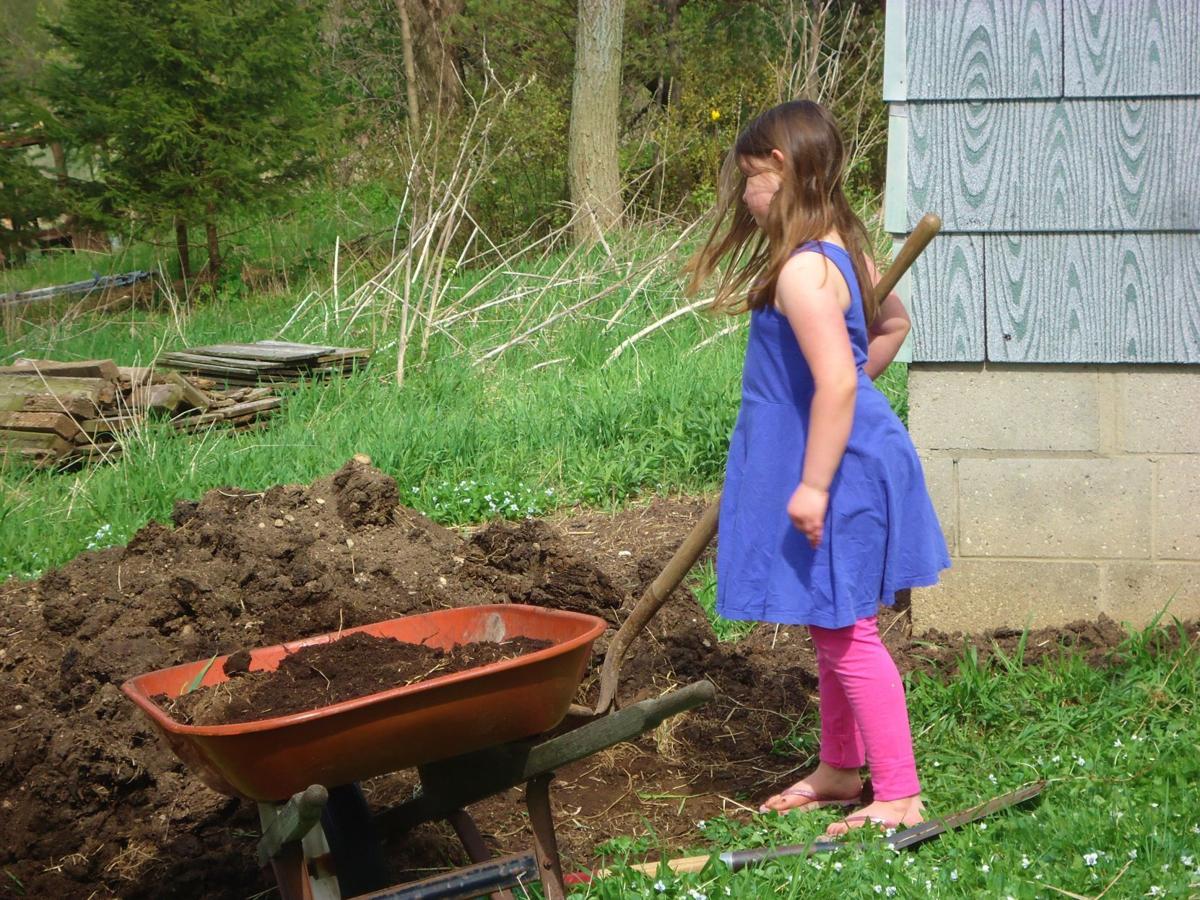 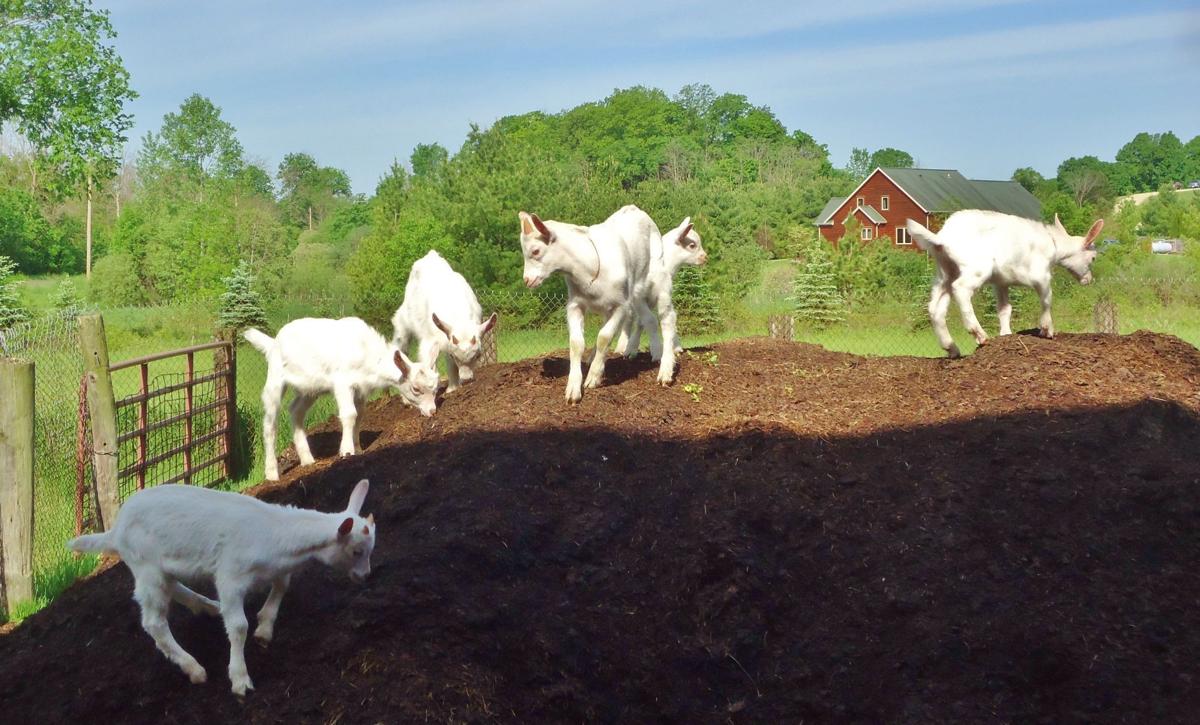 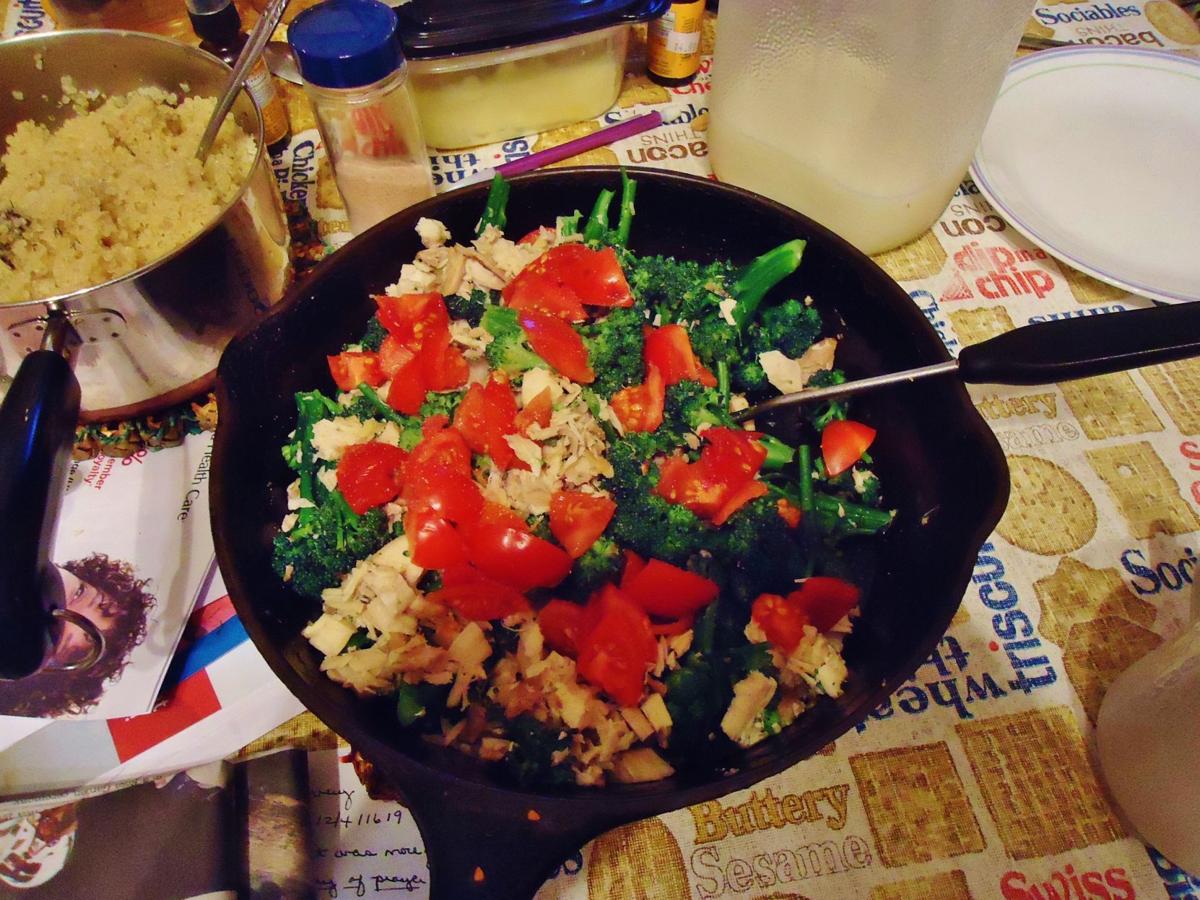 Chicken, broccoli and tomato stir fry with quinoa shows the results of cooking from scratch. 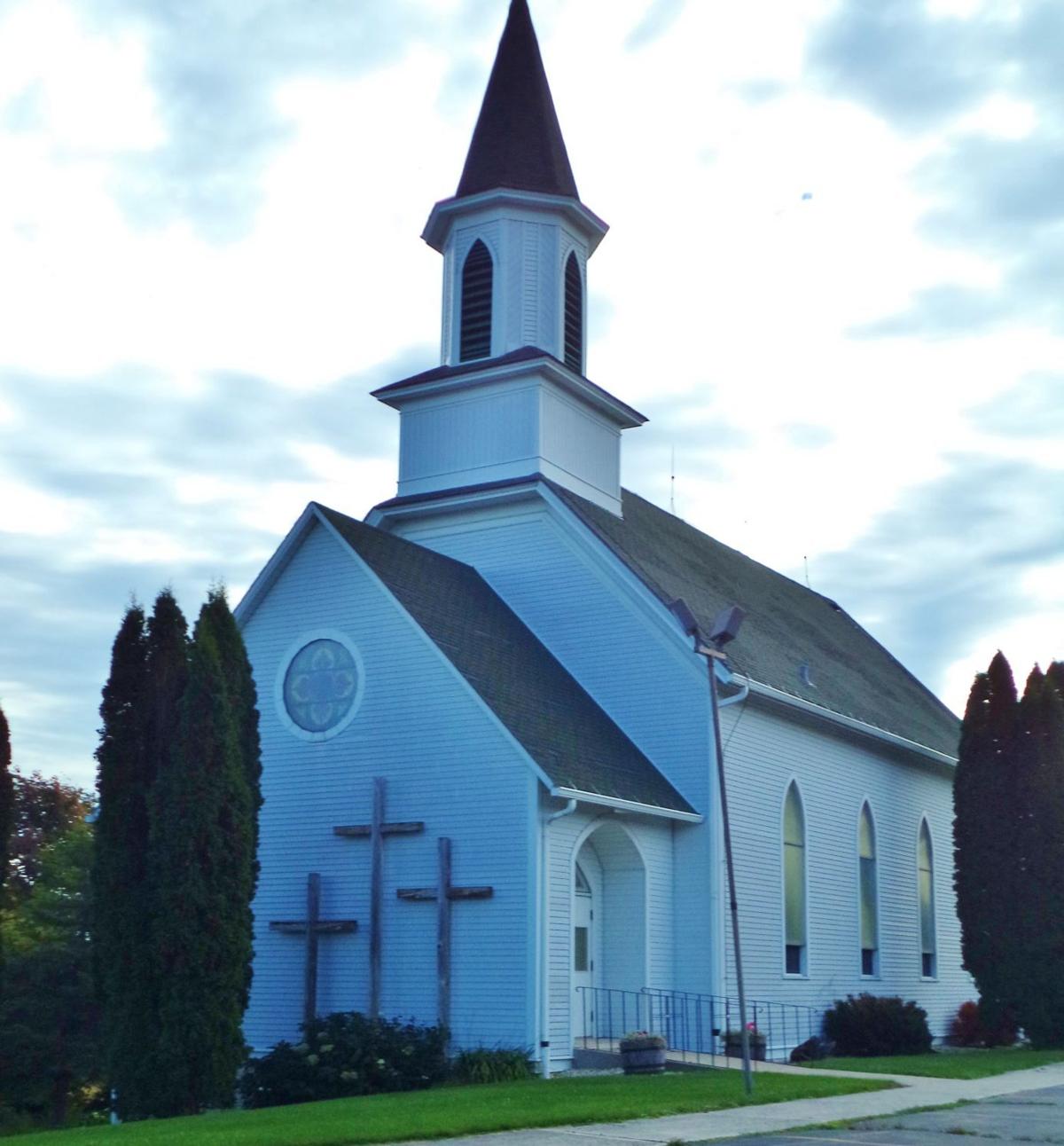 The Sterns teach their children to put God first. The St. John's Evangelical Church stands against the sky in Kohlsville, Wisconsin. 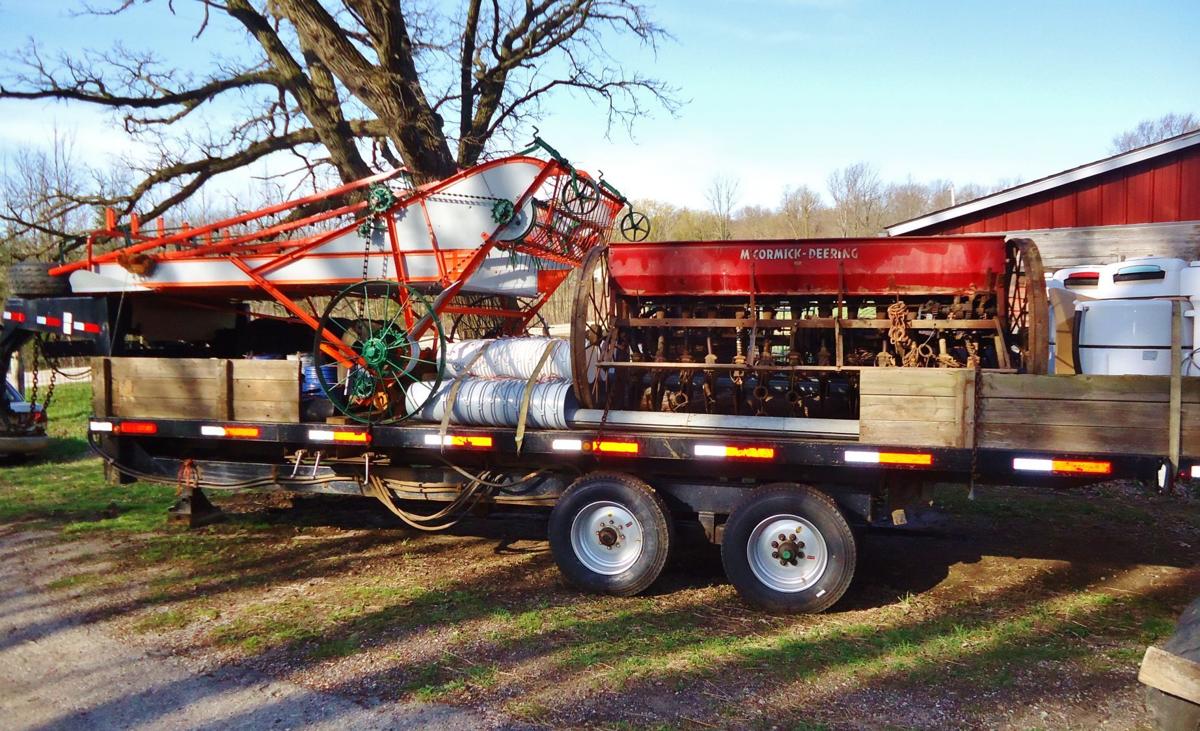 An auction load is packed the way an Amish person would, filling every hole in the load. 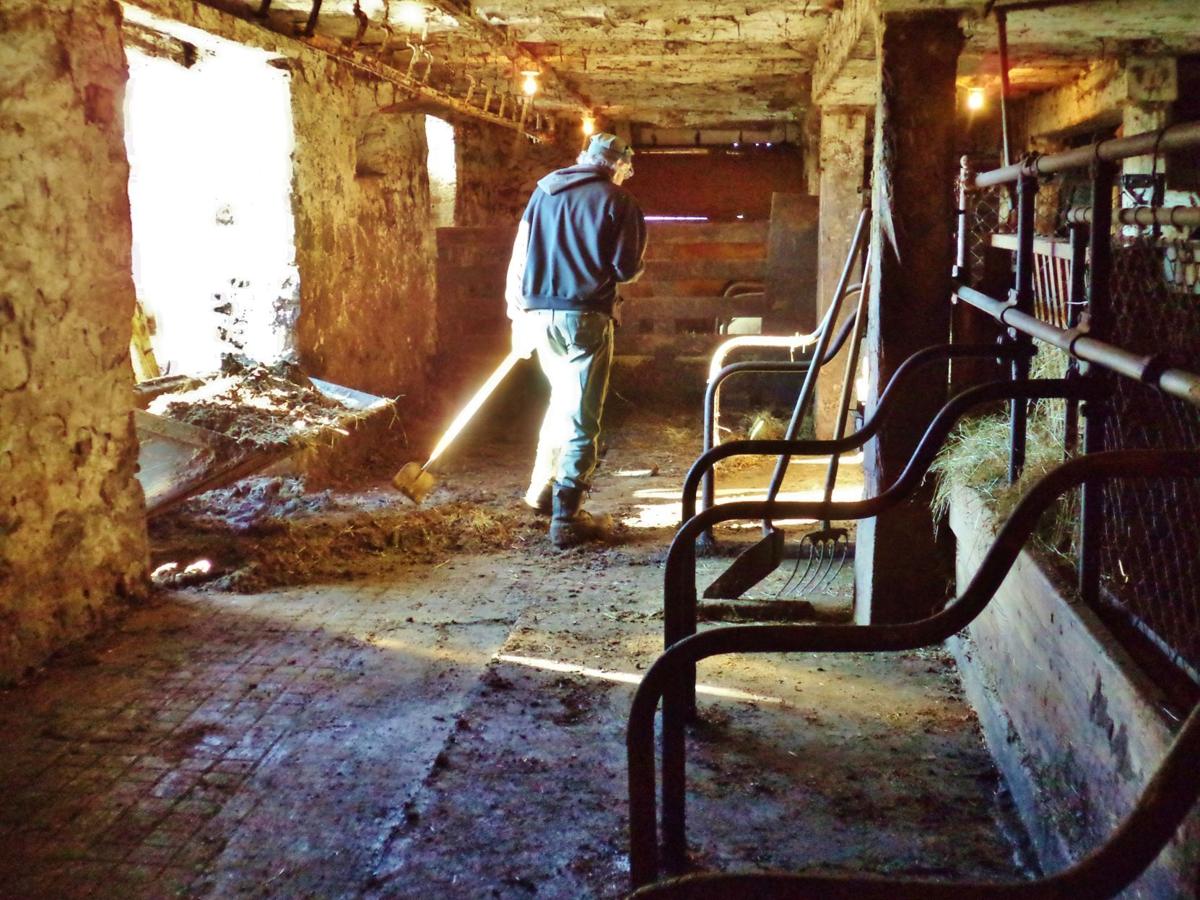 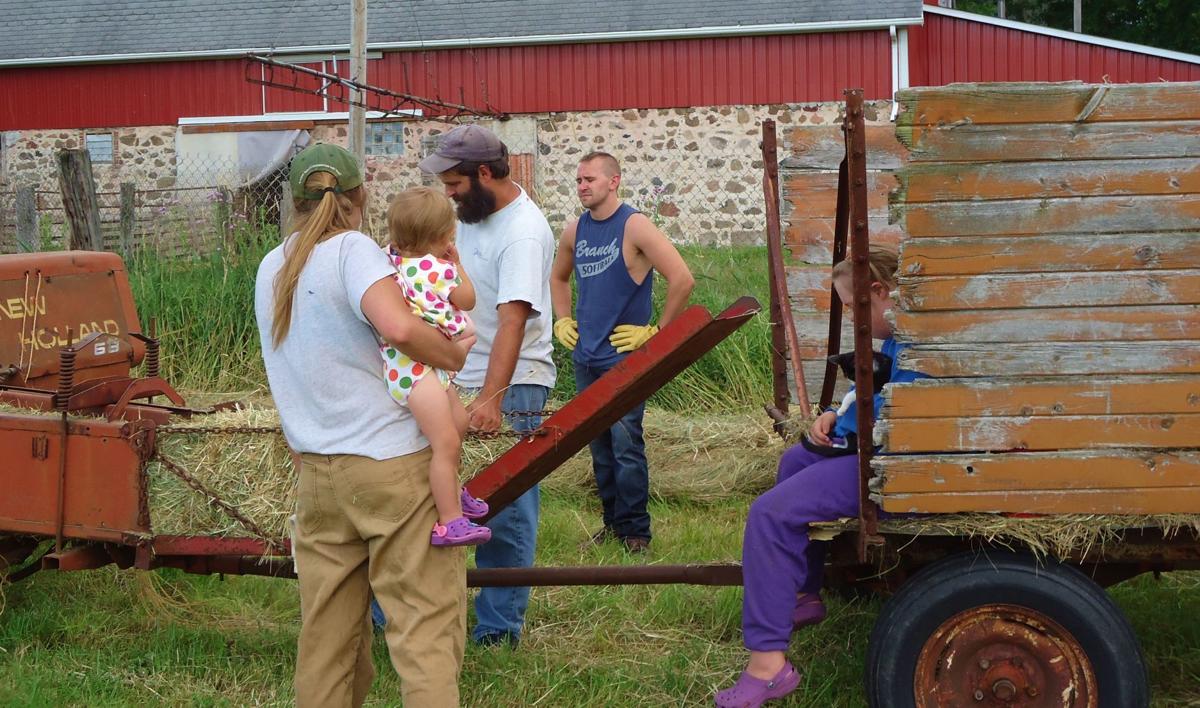 Everyone comes home to help bale hay, even 'significant others' are able to show their mettle.

One of the reasons we chose to raise our family in an agricultural setting was to teach them the value of hard work and manual labor. Their training involved learning strategic thinking regarding how a task could be accomplished with wisdom and expediency. Sometimes a child or two would also discover how to accomplish those tasks the quickest way possible with the least amount of energy expenditure. That was creativity!

We began our family in the late 1970s on a 2-acre parcel zoned A-2. Both my husband and I had come from an agricultural background. His parents operated a cow dairy; mine had a hobby farm with a variety of animals through the years. We had both experienced picking loads of stones, baling hay with small bales on the hottest most humid days of the summer and then packing them in airless haymows, shocking and thrashing grain, and hours of chores twice-daily. Well actually I copped out on that because it was my father’s hobby farm and the animals were few. We both learned what’s involved with growing, harvesting and preserving our own food, cooking from scratch on a daily basis, and building and repairing what we needed for ourselves.

Inherently we knew it was the experience we wanted for our children. It’s about perpetuating the rural tradition. But it’s also about teaching an independent self-sustaining lifestyle that can survive even the most difficult downturns in the economy and in life in general.

The first year of our marriage my husband couldn’t stand not having animals around and sort of became enamored by those “cute baby goats” he saw somewhere. We ended with three of them – and we haven’t been without goats for going on 44 years. The numbers have fluctuated through the years as have the breeds, but the barn has always contained goats. Through goats our children learned about the cycle of life and being faithful to tending what we steward. Those three goats at one time expanded to 80 or more when we tallied all the kids and five breed bucks. These days I’m always working toward decreasing the population by more than it grows. Some years I’m successful; some I’m not.

By working with my husband, who had a construction background as well, our children – including the girls – learned how to do a lot of things that urban individuals have not had the pleasure of being exposed to. They learned how to measure and cut material to build something, jockey a piece of furniture too big for a doorway so it fit through intact, pack so efficiently that even the Amish deny that an Englischer did it, clean a barn with a pitchfork and wheelbarrow, load and separate metals for recycling sale, discern between something salvageable for a yard or garden ornament – or just plain junk, restore machinery to use again and a plethora of other often-intangible talents. One daughter diagnosed and repaired an issue with our car. In hindsight perhaps by sending the children out to work with their father I shortchanged myself and didn’t teach them enough about running a household. But to be fair it seems like they volunteered to help him more than me.

Along with all the other talents our children acquired, they also learned about goat-keeping. They learned about the commitment of feeding and milking those goats twice each day even mornings when chores needed to be done before school – though some of them found ways to not need to do chores. The tradeoff was the joy of watching baby goats cavorting around, learning about the cycle of life and snuggling baby kittens.

By the time some of the boys were 12 or so they had jobs working for local dairy-cow farmers, often living onsite. They learned a lot from those families. Every time one was no longer employed by a farmer there were multiple others calling to offer a job at their farms. That speaks to an instilled work ethic that makes one in demand regardless of the economy.

All our adult children have solid-income jobs in various industries from construction to teaching to the service industry to management. Some are independent contractors with more work opportunities than they can fulfill. That speaks to integrity, honesty and reliability – all of which were developed at the side of their parents who sacrificed in order to teach them life skills through an agricultural lifestyle. They may not have had carry-out food or vacations or a lot of spare time, but they did learn how to be productive citizens and faithful spouses – often raising their children in a similar fashion. And they are paying the Social Security we have not yet begun to collect.

It’s the fulfillment of Psalm 127:4-5 – “Children born to a young couple will one day rise to protect and provide for their parents. Happy will be the couple who has many of them! A household full of children will not bring shame on your name, but victory when you face your enemies, for your offspring will have influence and honor to prevail on your behalf!” – The Passion Translation

It’s never too late to begin to teach children a productive lifestyle. Demonstrate the benefits of hard work – not only financially, but physically and with satisfaction of a job well done. Illustrate how sacrifice is worthwhile in order to achieve a long-term goal. Teach the benefit of saving for what one wants instead of taking out a loan and paying far more than the value of the item in the end. And don’t forget to teach children about God and putting Him first in their lives because He will be the one who watches out for them. There are so many lessons for righteous and successful living in God’s word, the Bible, that if followed can result in a life well-lived.

Married for 44 years, Darlene Stern and her husband have raised a family of nine in rural southeast Wisconsin. She has been a stay-at-home mom, goat herdsperson, dyslexia tutor, midwifery advocate, newsletter creator, manuscript editor, published author, model for professional artists and passionate pursuer of Jesus Christ. Her degree in geography is from the University of Wisconsin-Platteville.

OPINION  It’s difficult to fathom what Wisconsin just did to its endangered wolves. After a brief but confusing legal fight – where the Wiscon…

Tractor Supply Co., the largest rural lifestyle retailer in the U.S., announced Feb. 17 that it has entered into an agreement to acquire Orsch…

Next-generation granddaughters Faith and Grace join the action, learning how to unload hay.

The Sterns reclaim the main beam of a neighbor's demolished barn, to sell.

Sassy produces a new generation of kittens to snuggle.

Chicken, broccoli and tomato stir fry with quinoa shows the results of cooking from scratch.

The Sterns teach their children to put God first. The St. John's Evangelical Church stands against the sky in Kohlsville, Wisconsin.

An auction load is packed the way an Amish person would, filling every hole in the load.

Everyone comes home to help bale hay, even 'significant others' are able to show their mettle.