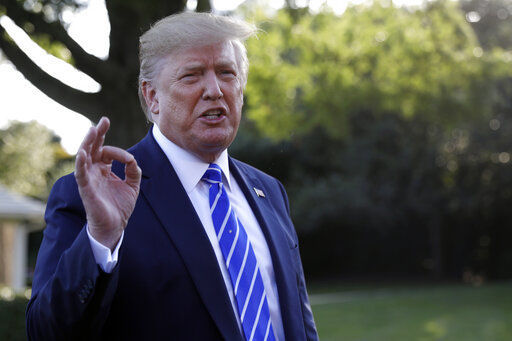 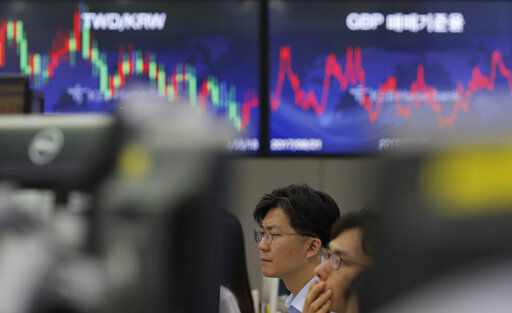 After increasing sharply two months in a row, the Ag Economy Barometer weakened significantly in August. It decreased to a reading of 124 – that’s 29 points less than a month earlier and just slightly less than the June reading of 126.

This month’s nationwide survey of 400 U.S. agricultural producers for the Ag Economy Barometer was conducted from Aug. 12 through Aug. 20. Weaker sentiment was fueled in part by both crop- and livestock-price decreases that took place during late July and early August. Prices for corn and soybeans decreased sharply as crop conditions improved, and the U.S. Department of Agriculture released larger-than-expected crop-production estimates on its August “Crop Production” report. This month’s survey responses were collected following the USDA’s release of the Aug. 12 report. 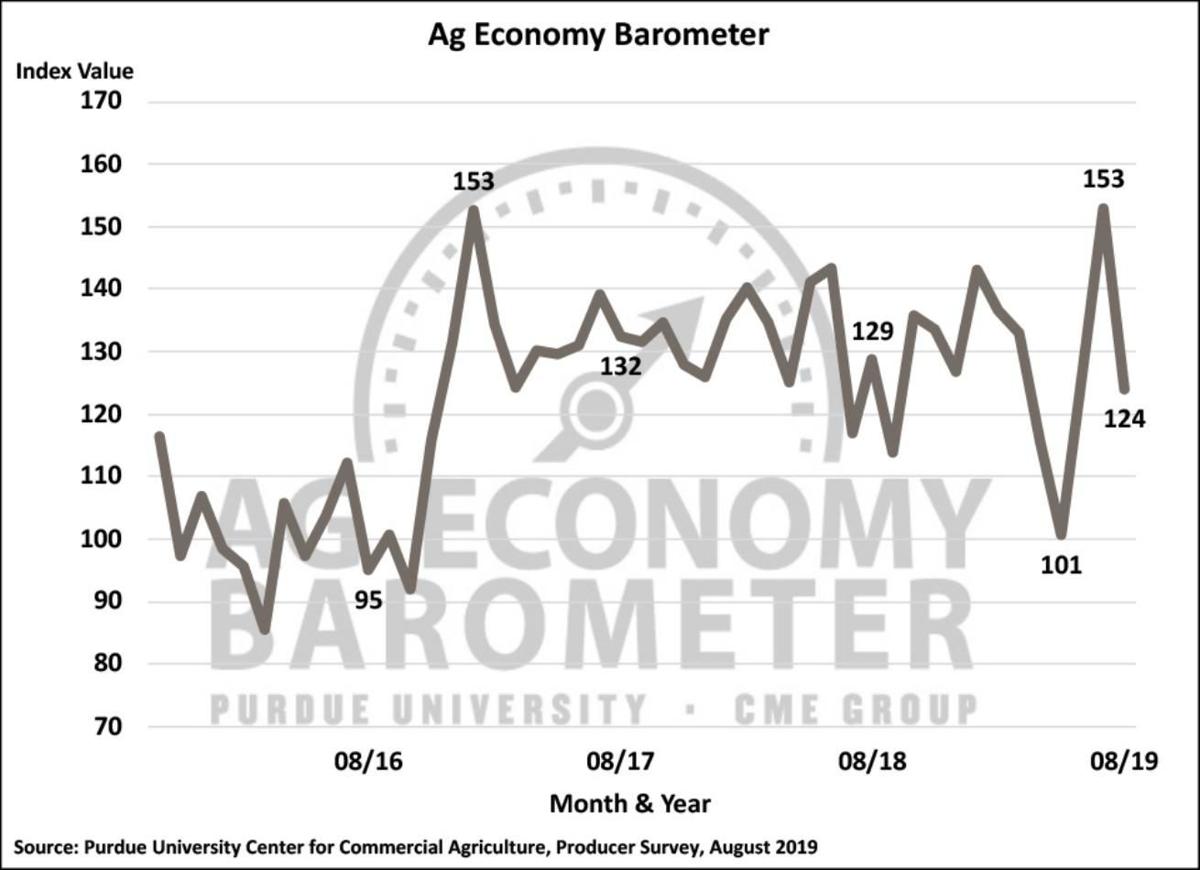 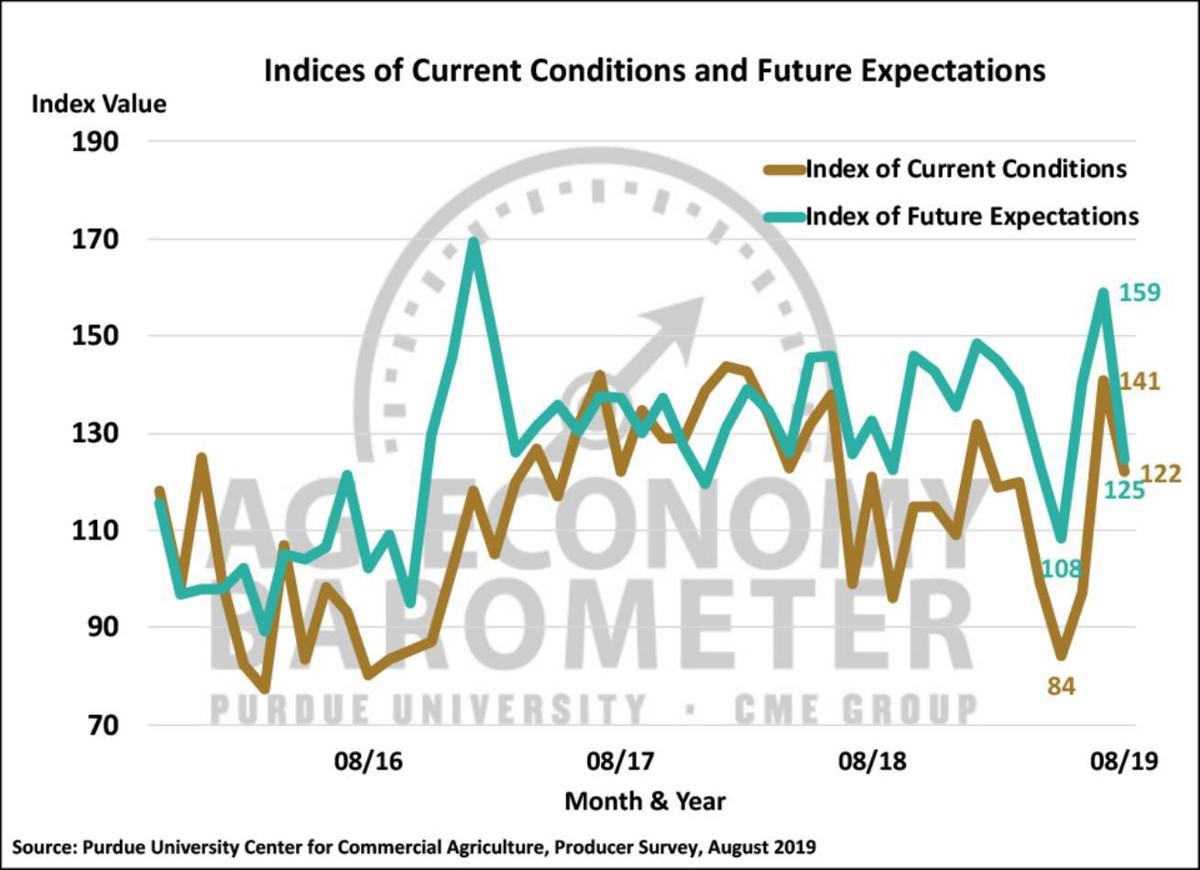 Producer concerns about the future of the farm economy led to a more-negative outlook on both the advisability of making capital investments in their farming operation and on their short-run farmland-value outlook. The Farm Capital Investment Index – formerly known as the Large Farm Investment Index – decreased to a reading of 56 in August. That’s 21 points less than a month earlier but still better than readings this year from June at 42 and May at 37. Farmer expectations are weaker for future economic conditions on their farms. That made them less-inclined to believe now is a good time to make large investments in buildings and farm machinery. 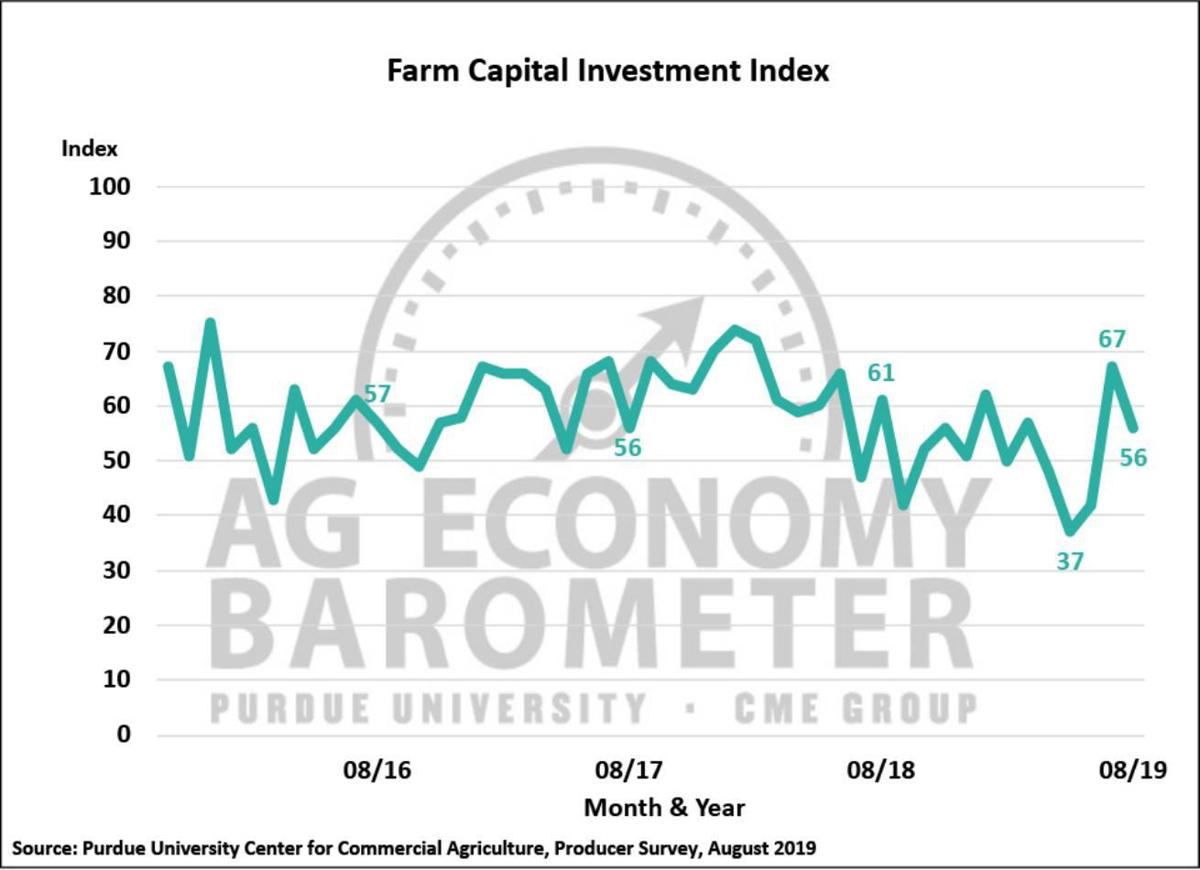 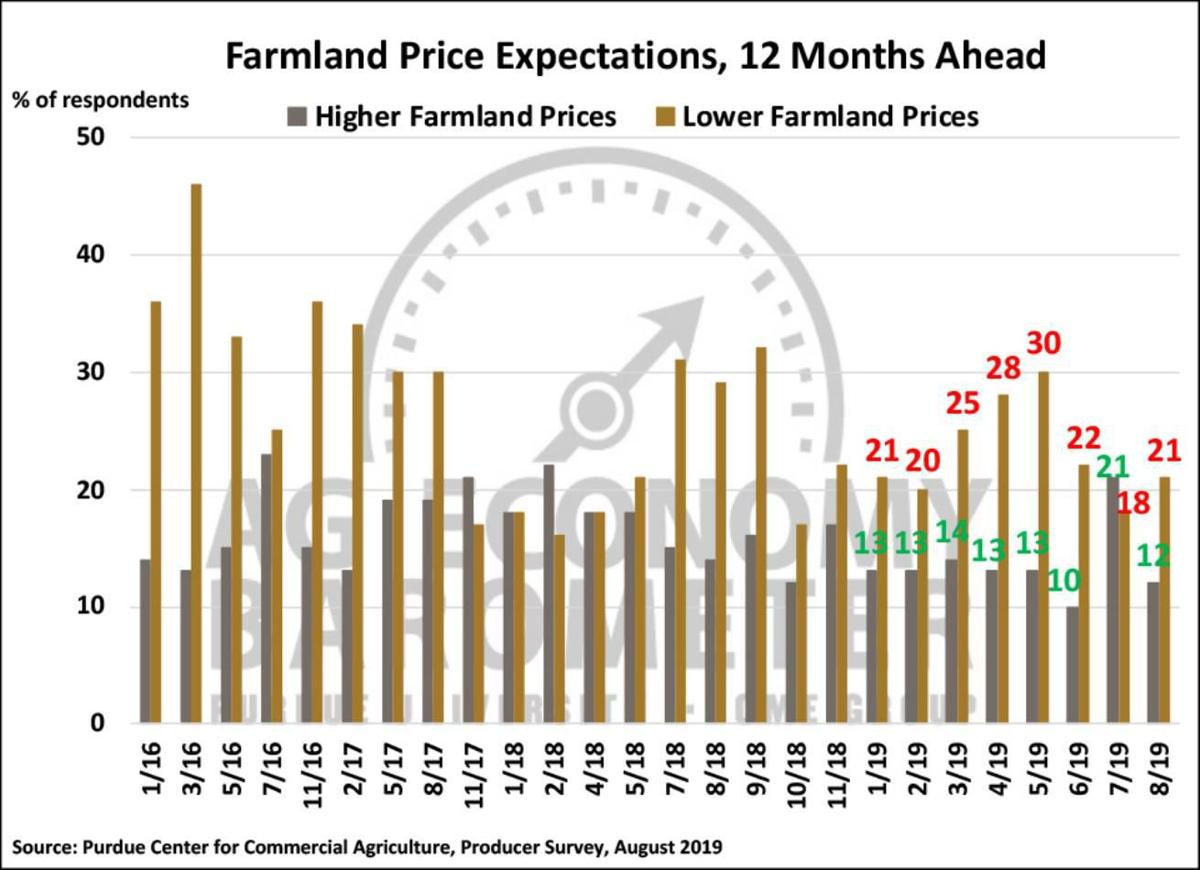 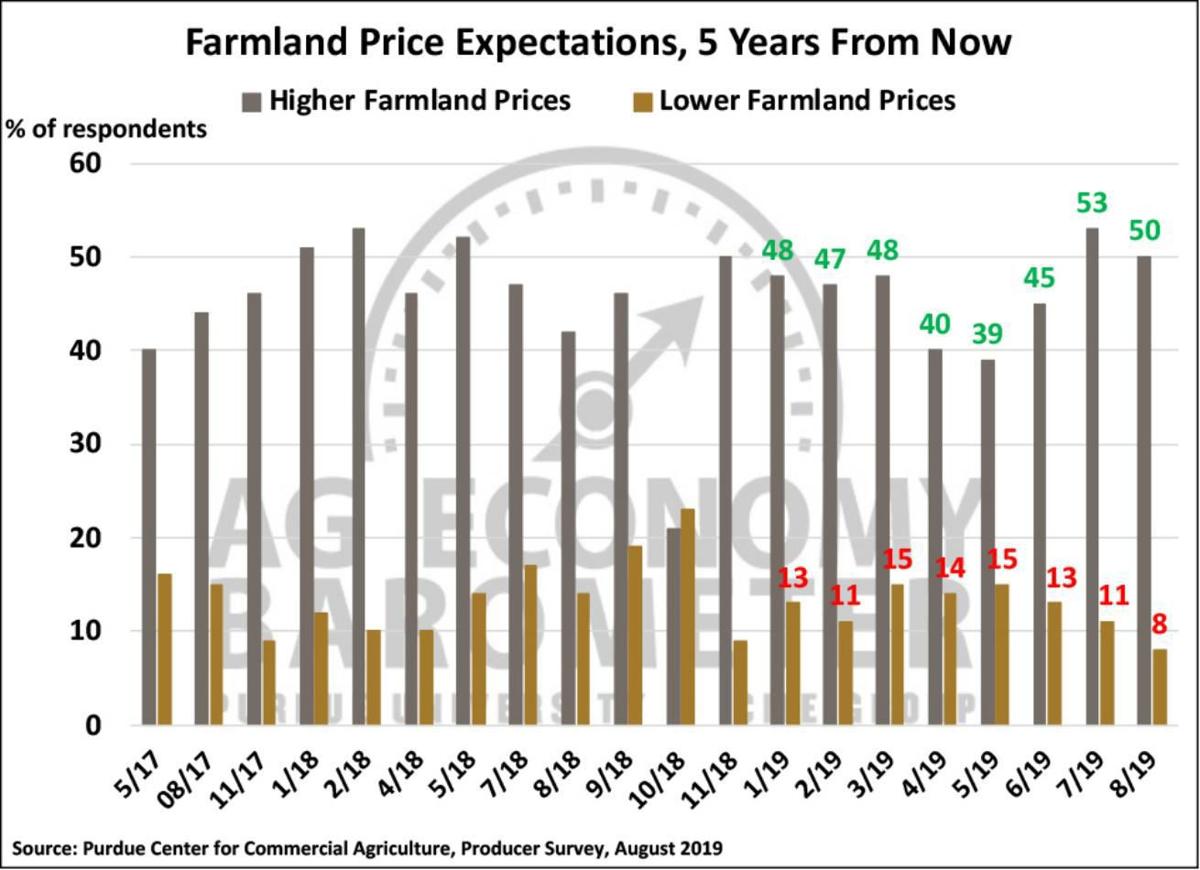 Since March 2019 we’ve been monitoring farmer perspective regarding how quickly they expect the soybean trade dispute with China to be resolved. Farmers were almost evenly split on the issue in March, with 55 percent indicating they felt it was unlikely. Of those who responded 45 percent said it was likely the trade dispute would be resolved soon.

In subsequent months the percentage of farmers saying they think it unlikely the trade dispute will be resolved soon increased, ranging from 80 percent in May to 68 percent in June.

We’ve also been monitoring whether or not farmers think the trade dispute will ultimately be resolved in a way that benefits U.S. agriculture. Of farmers in our survey in March more than three-fourths at 77 percent expected a beneficial outcome to the trade dispute. That percentage subsequently declined to 65 percent in May before rebounding in July to 78 percent. 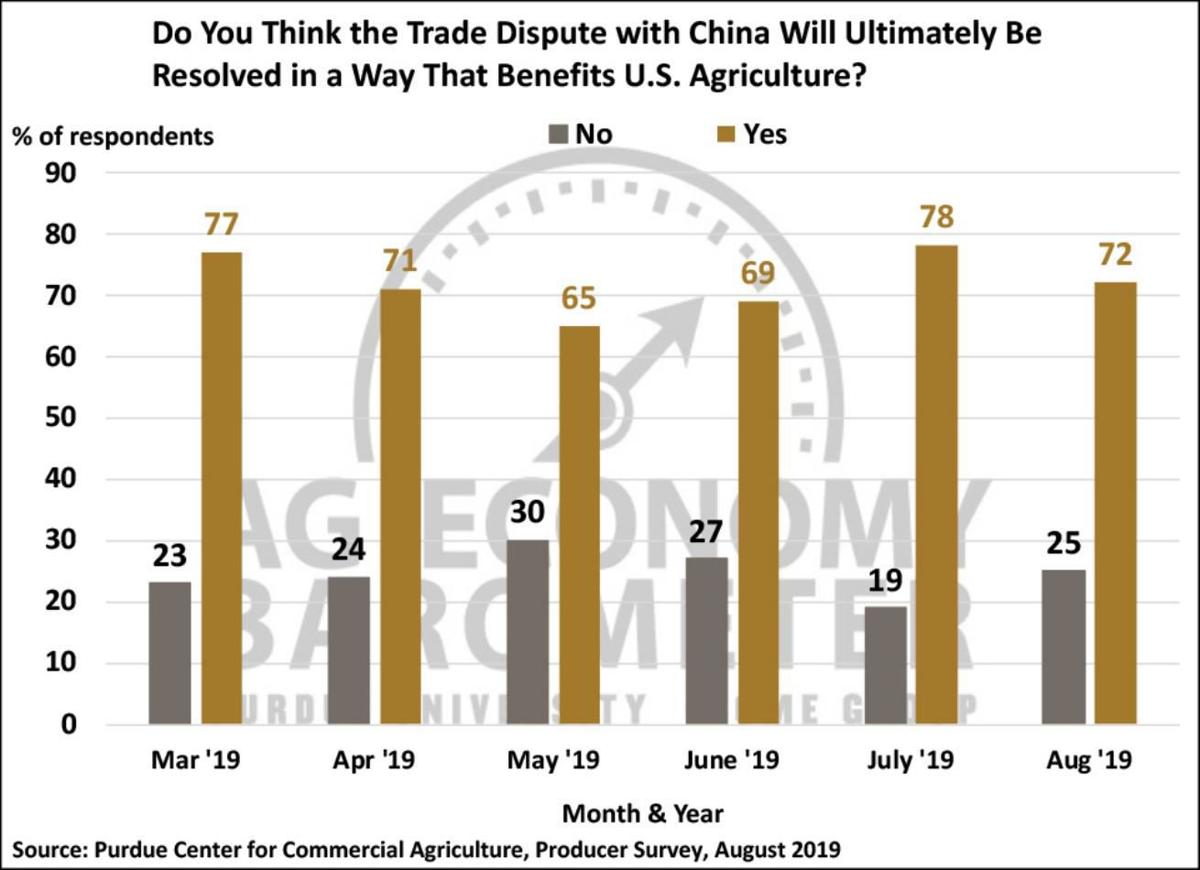 The USDA announced in late July the per-planted-acre payment rates by county for the 2019 Market Facilitation Program. Payments are to be made in three parts, with the first payment to be made this summer. Subsequent payments are to be made in late-fall 2019 and early 2020, if deemed necessary by the USDA. To learn more about how farmers view the payments, we posed two questions on the August survey.

Responses indicated that more than two-thirds of farmers at 71 percent believe the 2019 Market Facilitation Program will either completely or somewhat relieve their concerns about the impact of tariffs on 2019 farm income. But nearly three out of 10 respondents said “not at all” in response to the question, indicating they believed the payments would not pay income losses attributable to the ongoing tariff battles. Looking ahead to 2020, of farmers in our August survey 58 percent said they expect another Market Facilitation Program payment to be made to U.S. farmers for the 2020 crop year. 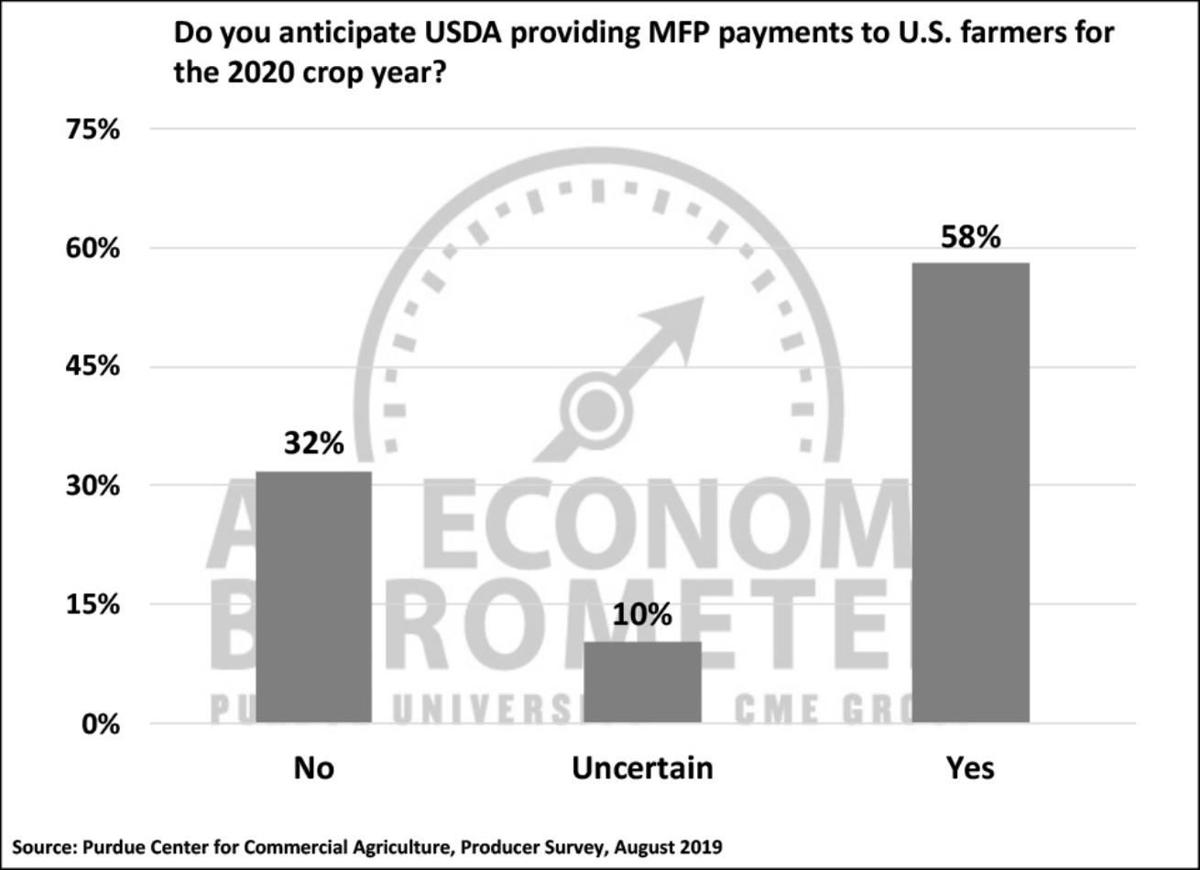 Producer sentiment weakened sharply in August as the Ag Economy Barometer declined 29 points compared to a month earlier. Farmers were less optimistic about current economic conditions on their farms and especially about their expectations for future conditions. Producers were much less inclined to think now is a good time to make capital investments on their farms. They had a more-negative outlook on short-run changes in farmland values than they had just one month earlier. But producer long-run outlook for farmland values on the August survey was virtually unchanged from that recorded in July.

Farmers in August were slightly more optimistic than in July that the trade dispute with China will be resolved soon. A large majority of producers still think resolution of the dispute will not come quickly. The percentage of farmers who expect the trade dispute to be resolved in a way that favors U.S. agriculture has ranged from 65 percent in May to 78 percent in July. This month’s reading fell in the middle at 72 percent. Finally more than two-thirds of U.S. farmers said they expected USDA’s 2019 Market Facilitation Program payments to either completely or at least somewhat relieve their concerns regarding tariff impacts on farm income. Looking ahead to the next crop year, 58 percent of farmers in our survey expect to receive a Market Facilitation Program payment for their 2020 crop.