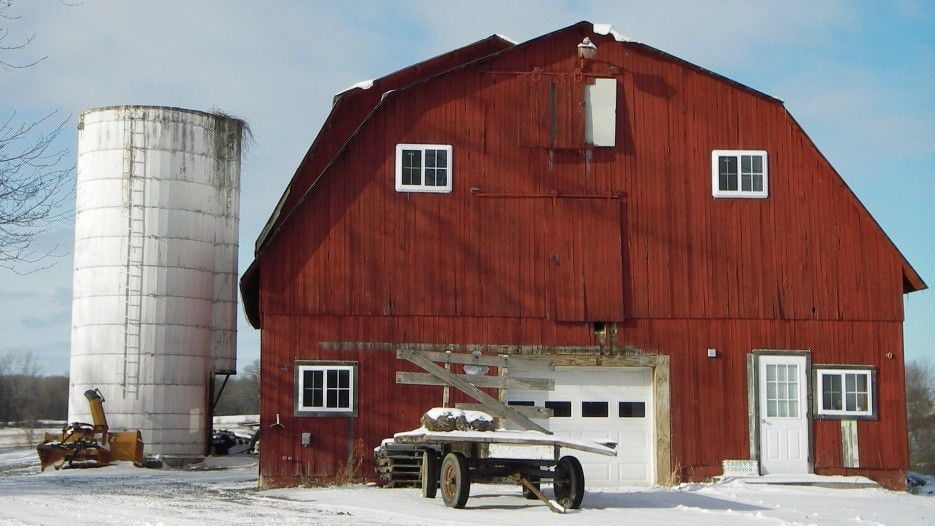 While well less than historical worst numbers, Chapter 12 family-farm bankruptcies in 2019 increased by nearly 20 percent from the previous year, according to recently released data from the U.S. courts. Compared with figures from the past decade, the 20-percent increase trails only 2010, the year following the Great Recession when Chapter 12 bankruptcies increased 33 percent.

The continued increase in Chapter 12 filings was not unanticipated given the multi-year downturn in the farm economy, record farm debt, headwinds on the trade front and recent changes to the bankruptcy rules in 2019’s Family Farmer Relief Act. The change raised the debt ceiling to $10 million. 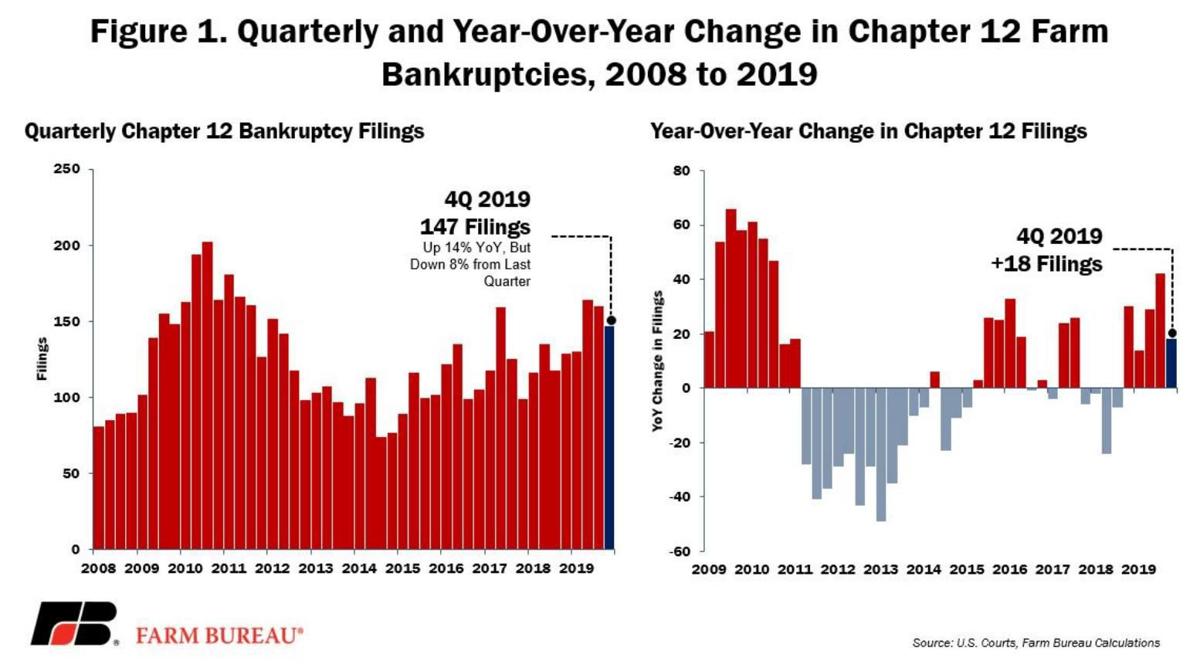 During the 2019 calendar year the number of Chapter 12 farm bankruptcies was the worst in Wisconsin at 57 filings. Wisconsin farm bankruptcies increased by eight filings from the prior year; they were at the worst level in a decade. Following Wisconsin, Georgia had 41 Chapter 12 filings in 2019, which was an increase of 15 filings from 2018. The number of Chapter 12 filings was at, tied with, or worse than decade-worst levels in 10 states – Iowa, Illinois, Kansas, Minnesota, Nebraska, New Hampshire, Ohio, South Carolina, South Dakota and Wisconsin. 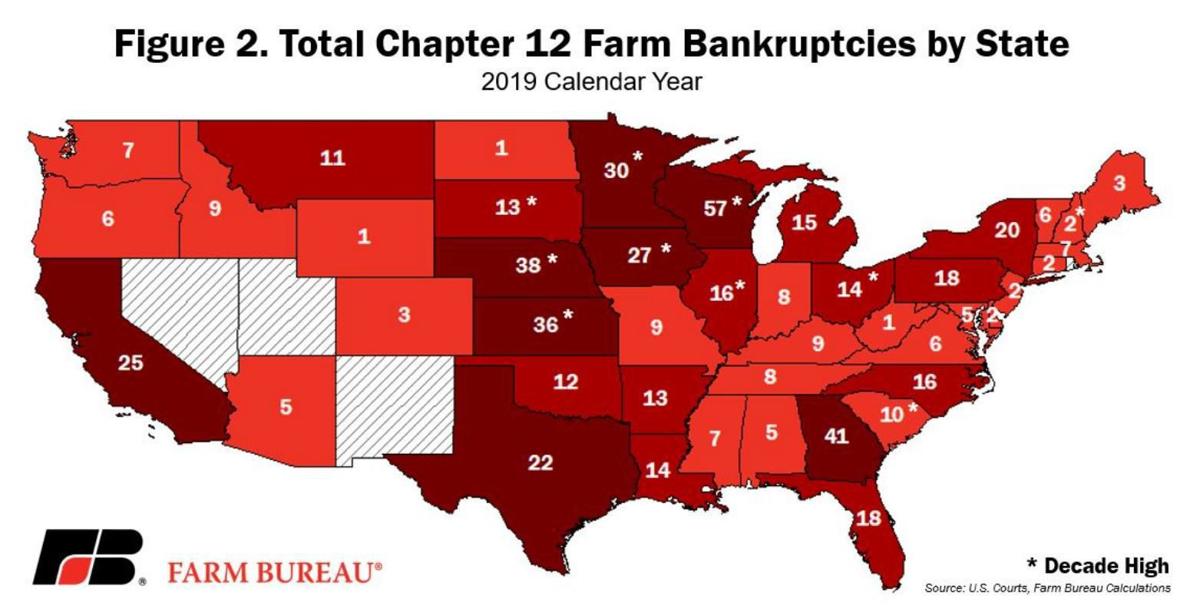 There was an increase in Chapter 12 farm bankruptcies in many states across the Midwest, West and Southeast. Georgia had the largest increase from the prior year at 14 more filings. Following Georgia were Iowa and Florida with 14 additional Chapter 12 bankruptcy filings. Nebraska had 11 additional filings.

All but three regions of the United States experienced worse bankruptcy rates in 2019 than in 2018. Almost 46 percent of the Chapter 12 filings were in the 13-state Midwest region, followed by 22 percent in the Southeast. The Midwest had 273 Chapter 12 filings, an increase from 234 filings in 2018. The Southeast had 132 filings, an increase from 89 filings the previous year. Figure 4 highlights Chapter 12 bankruptcy filings by region and the year-over-year change. 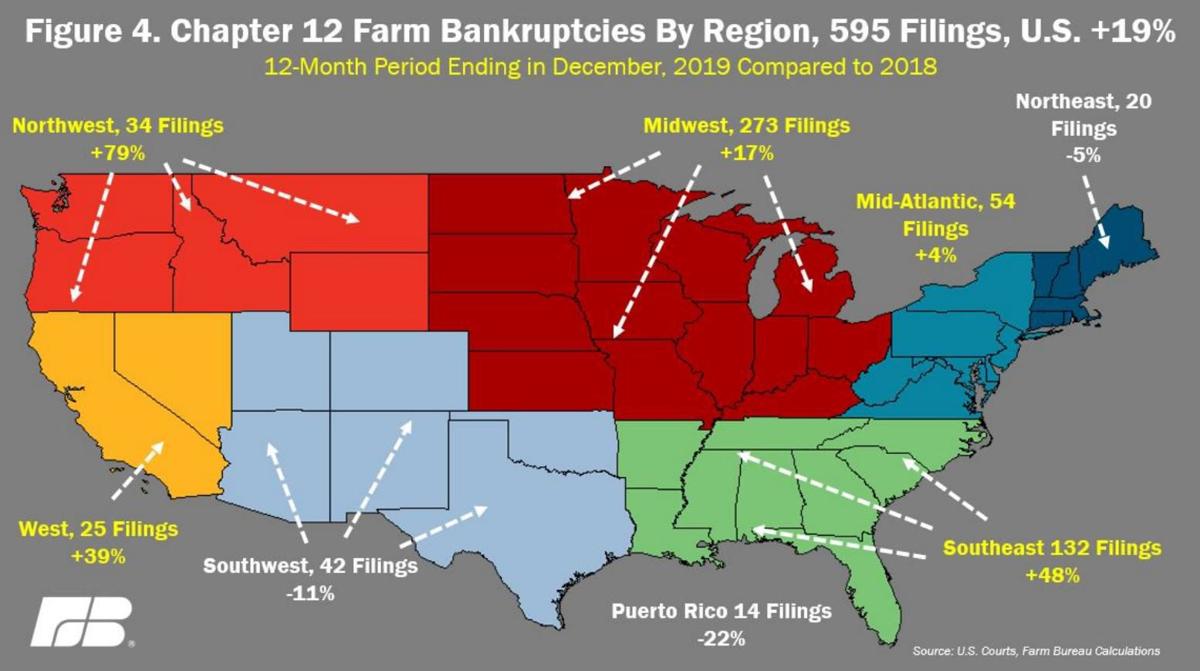 Depending on perspective, net farm income in 2019 inflation-adjusted dollars has either decreased 33 percent from a record best – or has increased almost 40 percent from the decade worst set in 2016. Regardless of perspective, net farm income in 2019 is slightly better than the 20-year average. But it was supported in large part by the Trump administration’s efforts to financially shield farmers from unfair retaliatory tariffs.

Without that support farm-related income from crop and livestock sales in 2019 inflation-adjusted dollars would have been at the second-worst level in the past decade at $63.6 billion. The corollary to that is that farm bankruptcies could have been worse considering the record farm debt of $415 billion in nominal terms – and the likely difficulties in servicing that debt without the revenue from the Market Facilitation Program.

Farm financial conditions in 2020 will likely be a race between the additional grain and oilseed supplies likely to come online following a record prevented-planting year, and any demand boosts for U.S. agriculture that results from new and enhanced trading opportunities.

The Farm Bureau has been invited to participate in the U.S. Department of Agriculture’s 96th annual Agricultural Outlook Forum. Participation in the short informal survey will help Farm Bureau staff communicate the general sentiment of the industry and our membership on the health and outlook for the U.S. farm economy. Visit www.fb.org/farmeconomy to take the survey.