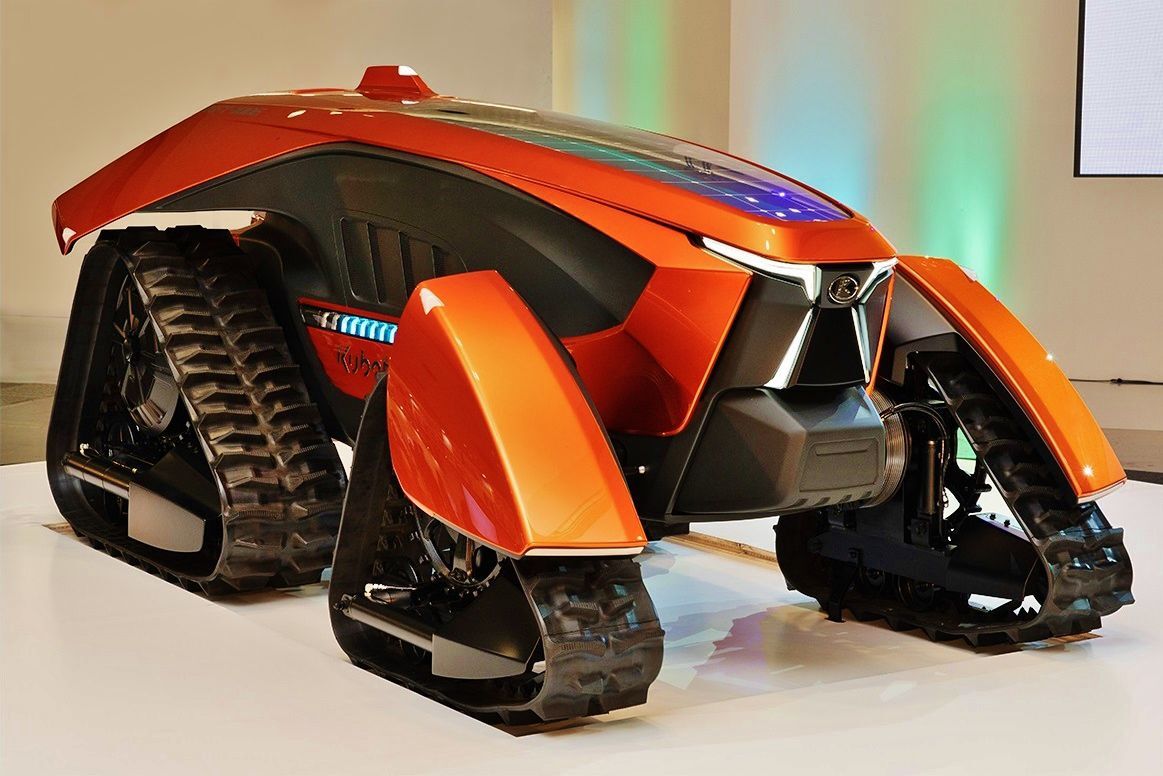 The percentage of farmers who plan to reduce farm-machinery purchases compared to a year ago came in at 56 percent on the Purdue Ag Barometer, unchanged from a month earlier but nine points less than in May.

The percentage of farmers who plan to reduce farm-machinery purchases compared to a year ago came in at 56 percent on the Purdue Ag Barometer, unchanged from a month earlier but nine points less than in May.

Farmer sentiment in July was virtually unchanged from a month earlier as the Purdue University-CME Group Ag Economy Barometer increased just one point to a reading of 118. The small change in the barometer left it 30 percent less than its February 2020 peak and 23 percent less than its level a year ago.

Although there was little change in the barometer this month, there was a shift in producer perspective on current vs. future conditions. The Index of Current Conditions increased 12 points to 111 while the Index of Future Expectations decreased to a reading of 121, five points less than in June.

The Ag Economy Barometer is calculated each month from 400 U.S. agricultural producer responses to a telephone survey. This month’s survey was conducted July 20-24, 2020. 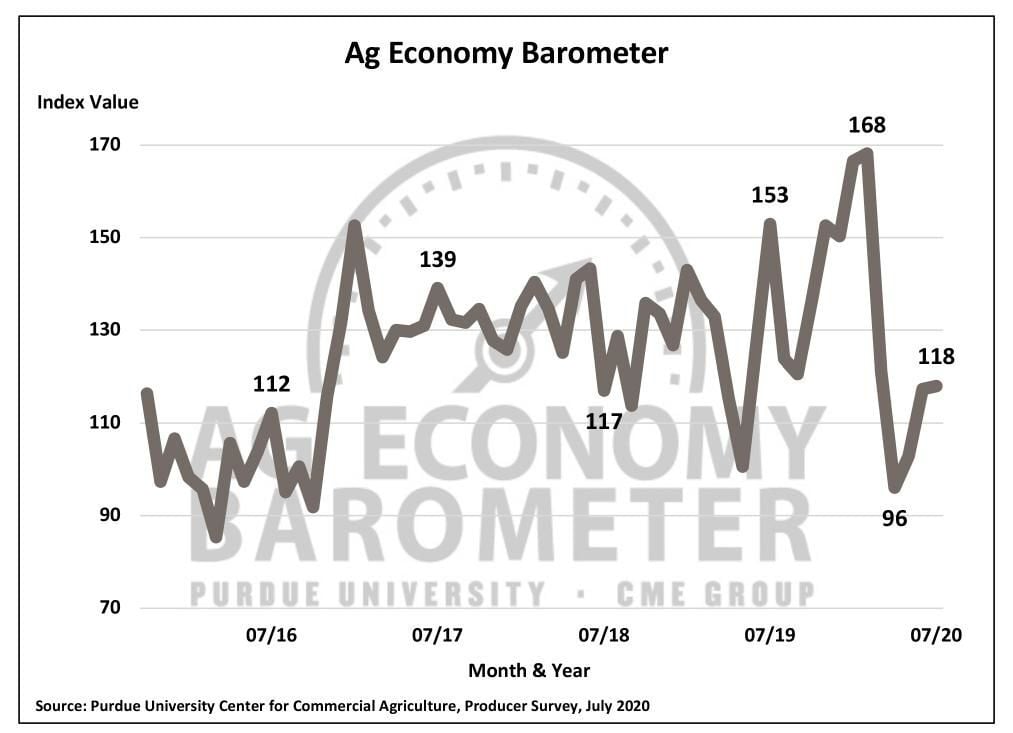 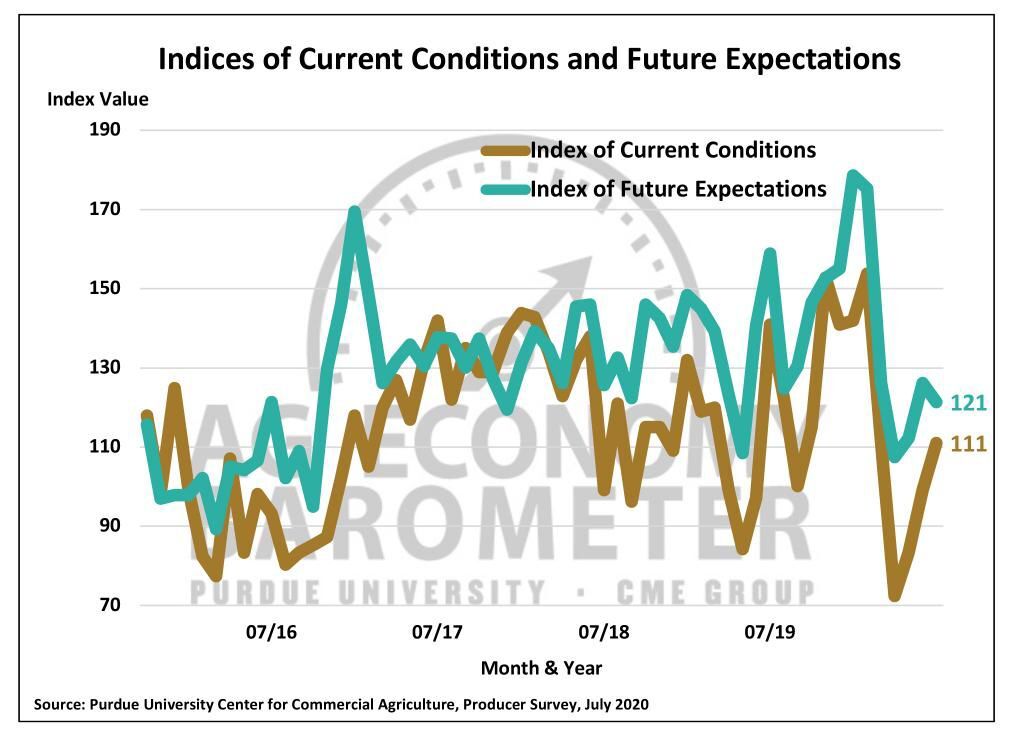 The percentage of farmers who plan to reduce farm-machinery purchases compared to a year ago came in at 56 percent, unchanged from a month earlier but nine points less than in May. The percentage of farmers who plan to keep machinery purchases about the same as a year earlier came in at 38 percent, also unchanged from the June reading but seven points more than in May.

Consistent with farmer perspective on farm-machinery purchases, the Farm Capital Investment Index, with a reading of 60, was unchanged from June. But both the June and July readings for the investment index were stronger than in May, when the index stood at a reading of 50. 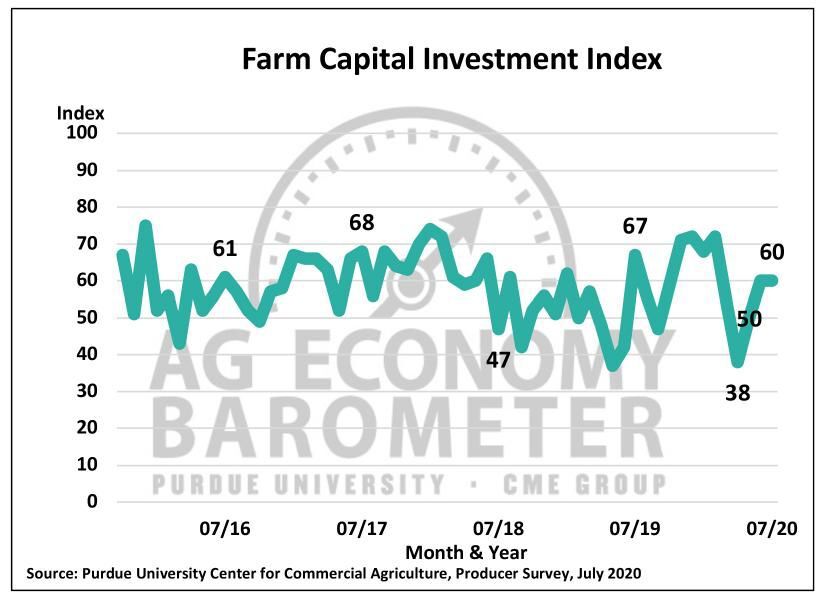 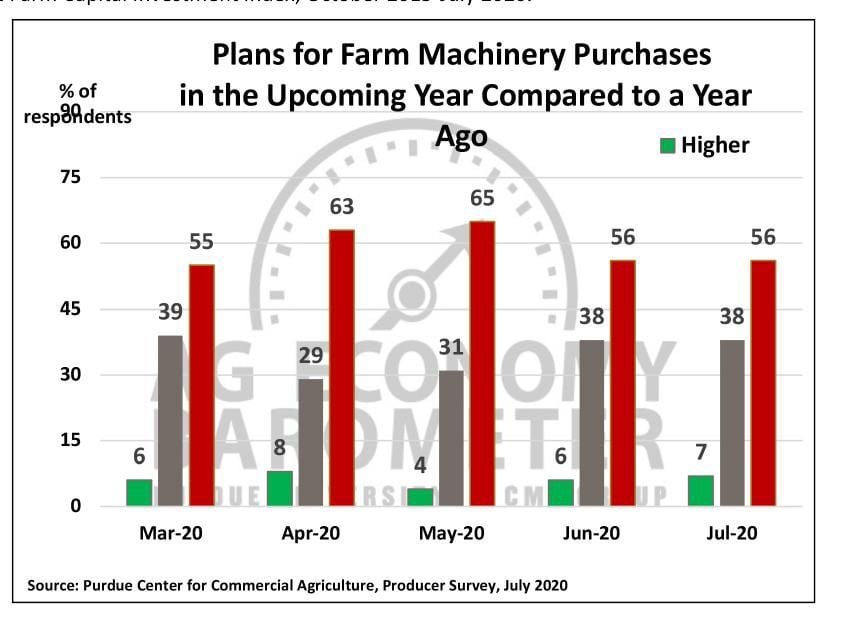 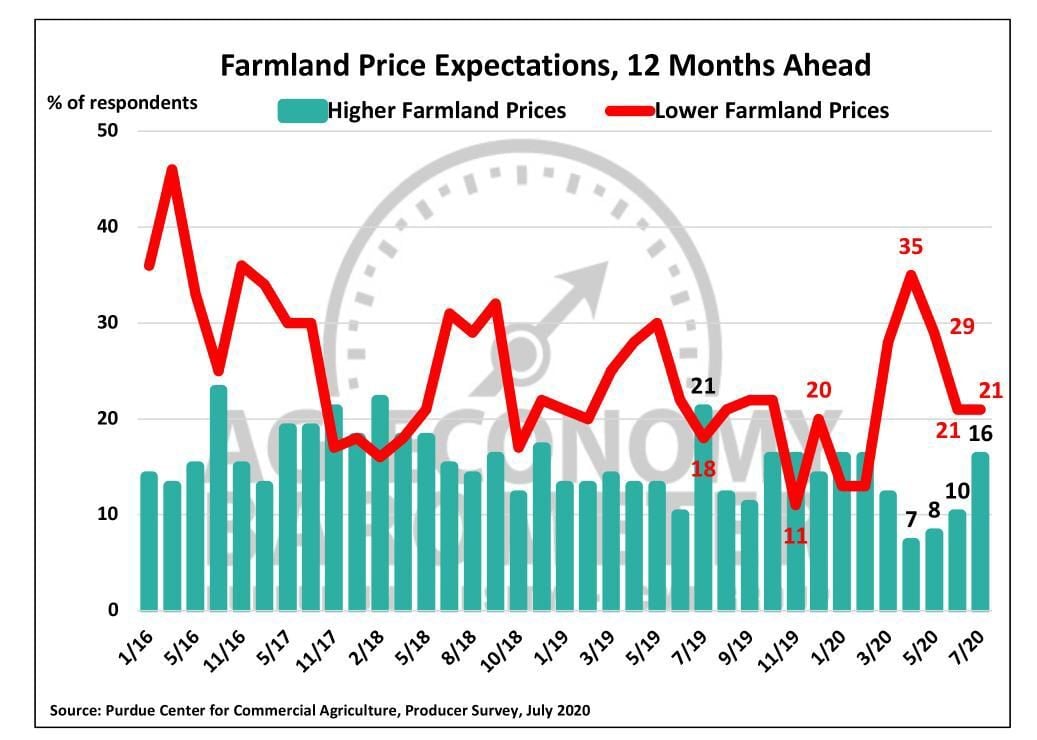 A clear majority of farmers responding to the July survey were still worried about coronavirus impacting farm profitability in 2020. But the percentage of farmers who were either “fairly worried” or “very worried” has been declining since March. For example 74 percent of respondents in March expressed concern about the impact of COVID-19 on farm profitability whereas in July that percentage decreased to 61 percent. But two-thirds of farmers responding to the July survey still said they believe Congress needs to pass another bill to provide additional economic assistance to farmers, in line with responses received for that question in both May and June. 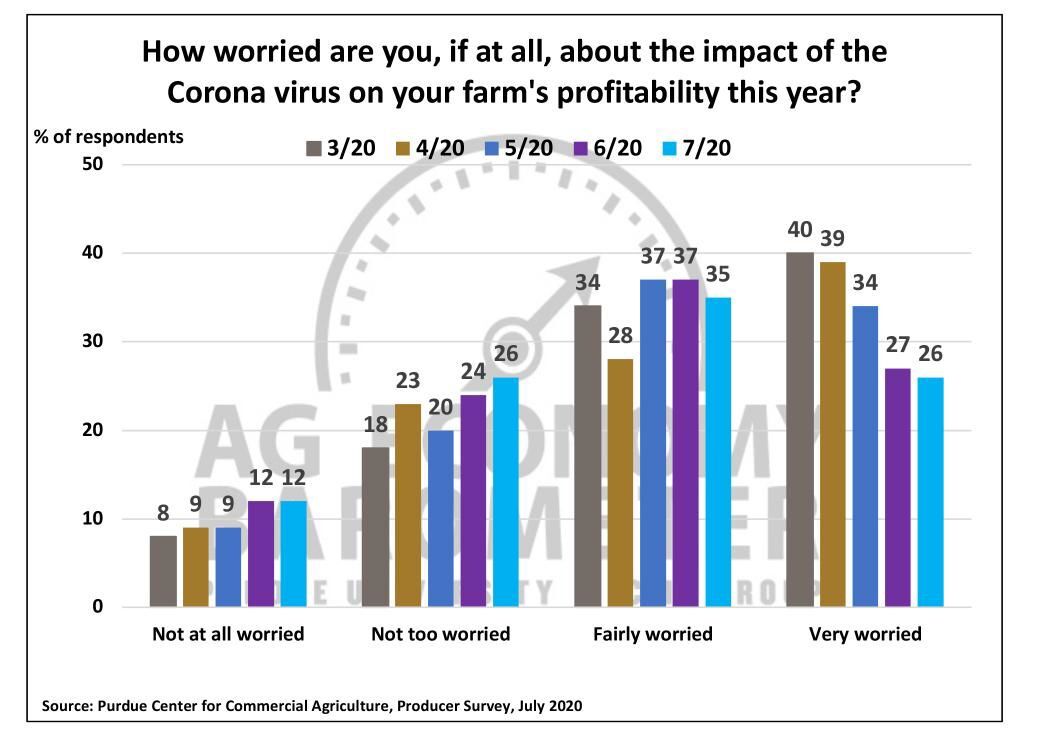 On both the June and July surveys, four out of 10 respondents said they are conducting more business online as a result of COVID-19. On the same two surveys, about half of farmers – 53 percent – said they were less likely to attend in-person educational programs as a result of COVID-19 concerns. In light of farmer reluctance to attend in-person educational events, the July survey included a couple of questions focused on ascertaining what sources of information respondents intend to rely on in place of in-person events. Responses indicated that a variety of information sources will be relied upon, with the most common response being farm magazines – chosen by 24 percent of respondents.

Responses to other listed information sources ranged from listening to farm radio broadcasts at 17 percent, reading emails at 16 percent, visiting websites at 16 percent, viewing online webinars and videos at 15 percent, and listening to podcasts at 12 percent. But when we followed that to ask respondents to indicate the No. 1 source they anticipate relying on in lieu of in-person educational events, about one-third of respondents at 36 percent chose farm magazines, followed by online webinars or videos at 19 percent, farm radio broadcasts at 17 percent and websites at 17 percent. Noticeably fewer farmers said emails at 8 percent and podcasts at 3 percent would be their best choice for information to replace in-person educational events. 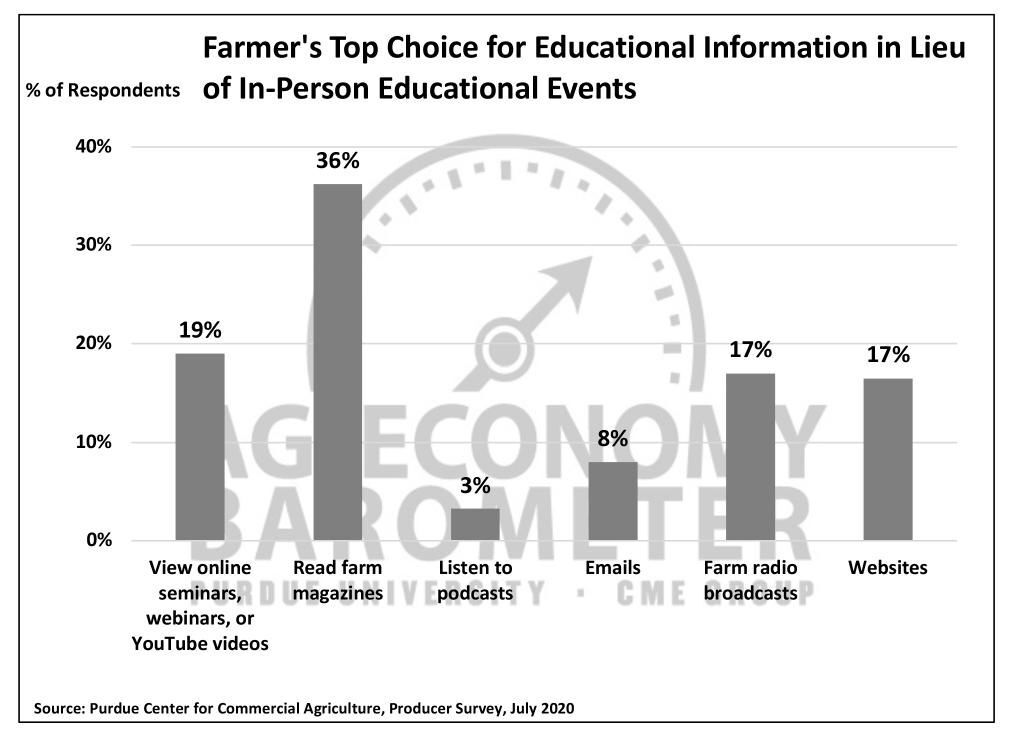 Farmer sentiment changed little in July compared to a month earlier; the Ag Economy Barometer increased just one point from June to July. Although the barometer changed little from June to July, farmers indicated they were noticeably more optimistic about current conditions and a bit less optimistic about the future than a month earlier. Producers were somewhat less concerned about the impact of coronavirus on farm profitability than they were earlier this spring, but two-thirds of respondents still said they believe Congress needs to approve another bill to provide economic support to farmers as a result of the pandemic. For the second month in a row, about half of farmers said they are less likely to attend in-person educational events this year and about one-third at 36 percent said farm magazines will be their No. 1 source to obtain information in lieu of in-person educational events, followed by online webinars or videos at 19 percent, farm radio broadcasts at 17 percent and websites at 17 percent. Just two out of 10 farmers said they have a marketing adviser to help make marketing decisions, and about half the farmers with an adviser said they chose an adviser based upon advice from another producer – 36 percent – or an agribusiness firm – 16 percent.

Backgrounding and A-I of 150 Hfrs. Prefer available pasture over