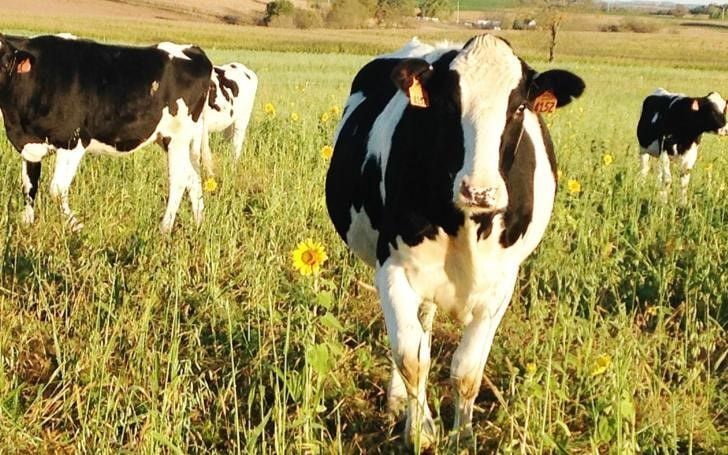 The pandemic sickened the dairy markets in April, creating immense pain on the farm. Dairy producers have cashed a paltry April milk check and their May revenue will be even more inadequate. But there are better days ahead. The dairy markets made astounding gains this past month. 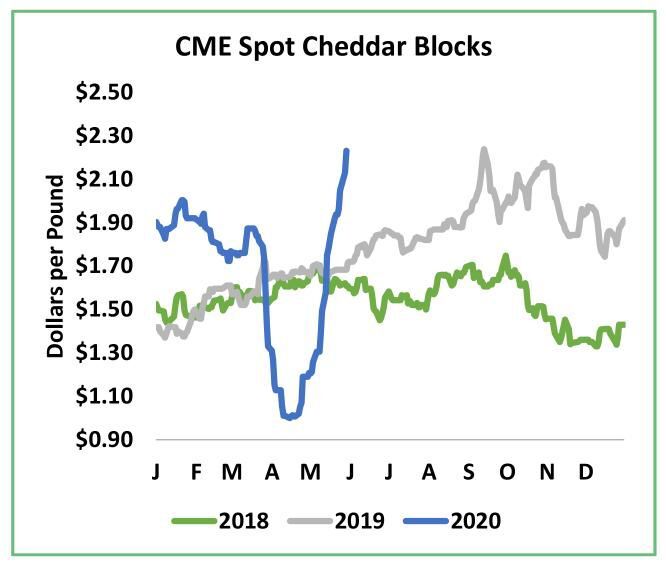 Cheesemakers are running overtime and fortifying vats with nonfat-dry milk to meet strong demand from retailers, restaurants, food-bank donors and exporters. Nonetheless cheese stocks remain tight; fresh blocks are especially difficult to source. Only 17 loads of blocks traded at the CME spot market in May, with just four loads changing hands in the past two weeks. European cheese is much cheaper than U.S. product, which suggests the surge in U.S. cheese exports will be short-lived.

Spot butter increased 46.25 cents in May to $1.66 per pound. It gained 6.75 cents during the holiday-shortened week after Memorial Day. On the other side of the Atlantic, European butter values are also increasing. U.S. butter churning has slowed considerably as more cream goes to ice cream and other uses. Cream is particularly scarce in the East, where cream multiples have increased from about 70 percent of the butter price in mid-April to more than 1.3 times the butter price. In the West, cream multiples have bounced back but they are still less than the values reported in late May in recent years. 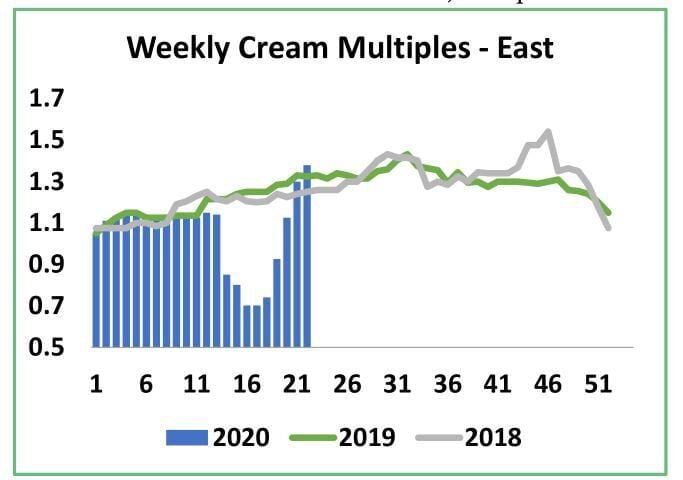 Spot nonfat-dry milk is slowly increasing. It closed May 29 at $1.03, an increase of 1.75 cents for the week to the best spot value since mid-March. Spot nonfat-dry milk regained 23 cents in May. The tighter milk market has shortened the lineup of trucks at driers, and many balancing plants are running at less than capacity. Cheesemakers are chipping away at the nonfat-dry-milk stockpile. Importers are reportedly stepping in as well, albeit with some caution.

China is helping to keep global milk-powder inventories in check. China imported 140.4 million pounds of whole-milk powder in April, 21.9 percent more than they did a year ago. Chinese whole-milk-powder imports began slowly this year, but April’s strong tally brought them to within 0.2 percent of the previous year. China’s year-to-date skim-milk-powder imports are 14.3 percent less than the record-breaking levels set in the first four months of 2019. But they are still more than every other year including 2014. Given disruptions in global trade and reports of more milk moving to driers in China during the lockdown, Chinese milk-powder imports were stronger than anticipated. It seems likely that China is stocking up while dairy is on sale. 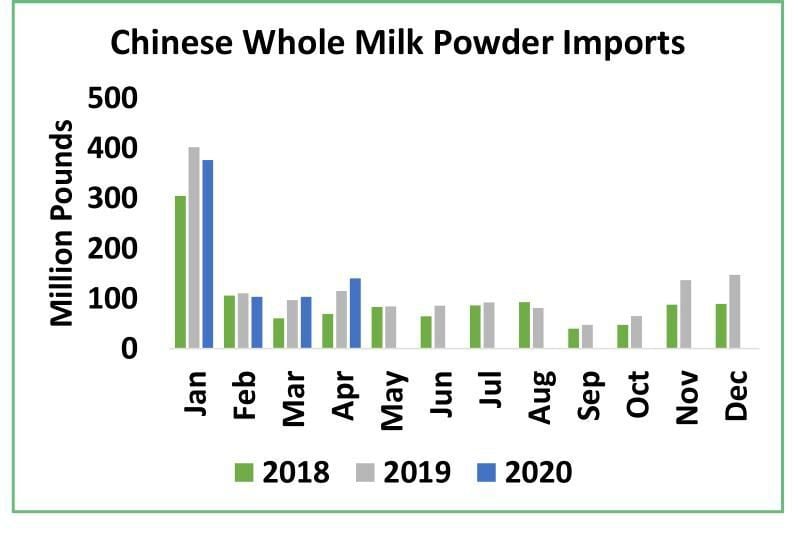 Only the whey market retreated this past week. CME spot whey decreased 5.75 cents to 30.5 cents, matching the worst price since November. Dragged down by formidable cheese output, spot whey powder decreased 8.75 cents in May, a 22 percent decline.

Mostly better dairy-product prices translated to a sizeable advance in the futures. June Class III surged $1.47 this past week to $18.50 per hundredweight, a new life-of-contract best. July Class III added $1.24 and the other Class III contracts posted hefty gains. Every contract on the board is at least $16. Second-half Class IV contracts climbed 76 cents this past week, on average. Still with June Class IV at $13.39 and July at $14.82, values are well south of profitability much less prosperity. 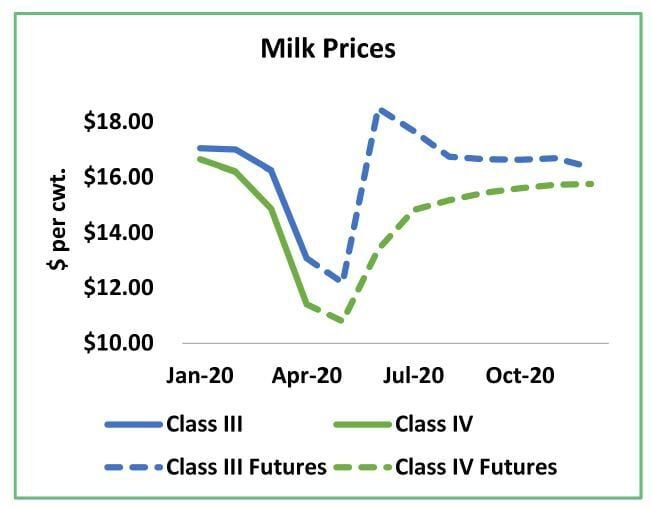 As evidenced by the awe-inspiring May rally, efforts to reduce milk output are clearly working. Slaughter volumes remain elevated. Reduced milk yields suggest dairy producers are still focused on cutting costs rather than filling the tank. Will they reverse course once better prices arrive? Although demand has improved there seems to be little reason to boost supplies. Even without the crippling impact of the pandemic, the industry would’ve likely drowned in milk this spring. The United States, Europe, Oceania and Argentina together pumped out about 935 million pounds more milk in March than the year before, the largest year-over-year increase since February 2018. The United States accounted for 57 percent of the gain. Growth in U.S. milk production was cut in half in April and the U.S. dairy herd shrunk by 4,000 cows. In such a shaky global economy there doesn’t seem to be a good reason to add them back. We could do with a few less. 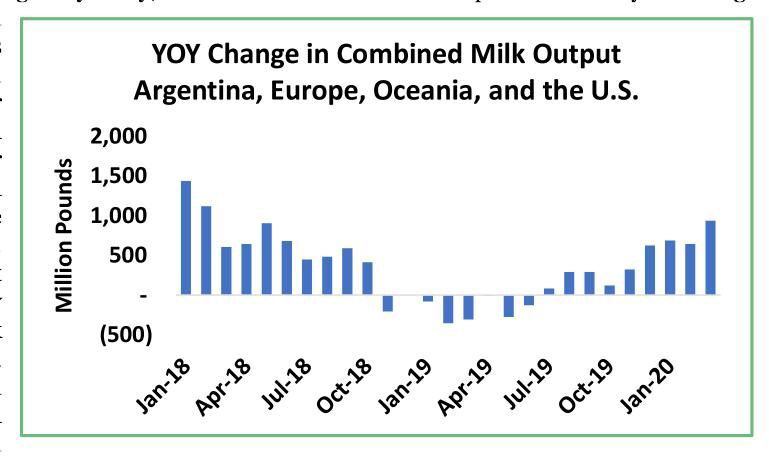 After a relatively sedate spring on LaSalle Street in Chicago, the feed markets woke this past week. July corn settled at $3.2575 per bushel, an increase of 8.75 cents from the previous Friday. July soybeans rallied 7.5 cents to $8.4075. The hot dry forecast likely helped to heat things. The cash market fanned the flames. Farmers are unwilling to sell at those prices, but ethanol plants have started to buy corn again. There is plenty of corn to go around but little for sale in the cash market.

Soybean futures decreased late in the week as tensions flared between the United States and China. The diplomatic relationship is deteriorating quickly, bringing the hard-fought gains of the trade war into question.

4th-cutting alfalfa square-bales. As Good As It Get's Under-roof never