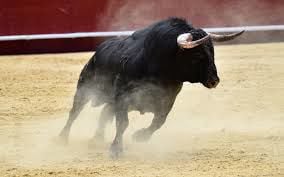 In the Cheddar-block market – currently the greenest pasture in the commodity world – there’s a bull of a different breed. He’s relentless, charging straight uphill with no signs of fatigue.

In the Cheddar-block market – currently the greenest pasture in the commodity world – there’s a bull of a different breed. He’s relentless, charging straight uphill with no signs of fatigue.

In an environment as fickle as the Chicago Mercantile Exchange, bulls are not typically bred for their stamina. They tend to charge and then pause to catch their breath before attempting another run. They’re not ashamed to retreat to the shade from time to time.

But in the Cheddar-block market – currently the greenest pasture in the commodity world – there’s a bull of a different breed. He’s relentless, charging straight uphill with no signs of fatigue. This past week the block market leapt from one record to the next, finally resting at an all-time best price of $2.915 per pound, an increase of 24 cents from the previous week’s already lofty value. 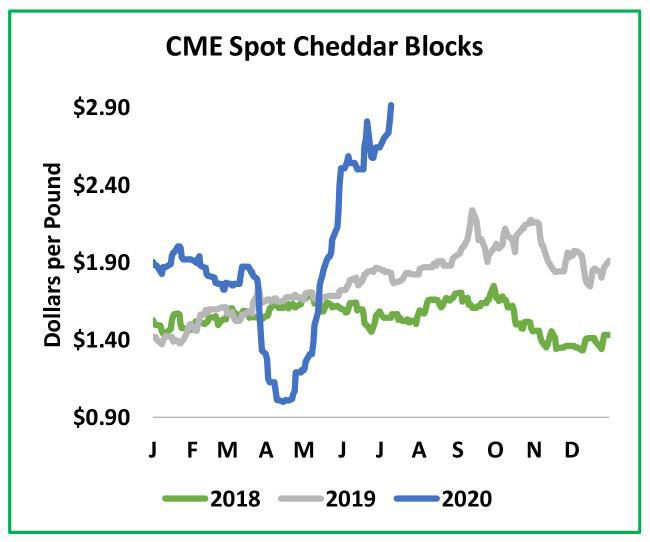 The barrels were less energetic. They decreased 7.5 cents this past week to a still-lofty $2.34. Near-term demand for blocks remains formidable. The U.S. Department of Agriculture’s “Dairy Market News” reports, “With government buying programs in place, along with steadfast retail demand during grilling season, (Midwestern) buyers are still active and willing to pay prices very few contacts would have expected when markets were near $1 in April.”

But in the Northeast and the West, some cheese buyers question the staying power of such unprecedented prices. Grocers and the food-box program are moving a lot of cheese. But orders are starting to slow from restaurants, hotels and caterers, especially in areas where coronavirus counts are increasing. Meanwhile cheesemakers are running hard. Despite the heat there’s plenty of milk in the Upper Midwest; cheesemakers are able to secure spot loads at a discount.

Butter production has slowed as cream heads to other uses, particularly ice cream. Butter demand continues to suffer from the pronounced slowdown in the restaurant and food-service industries. This past week CME spot butter decreased 4.75 cents to $1.69. 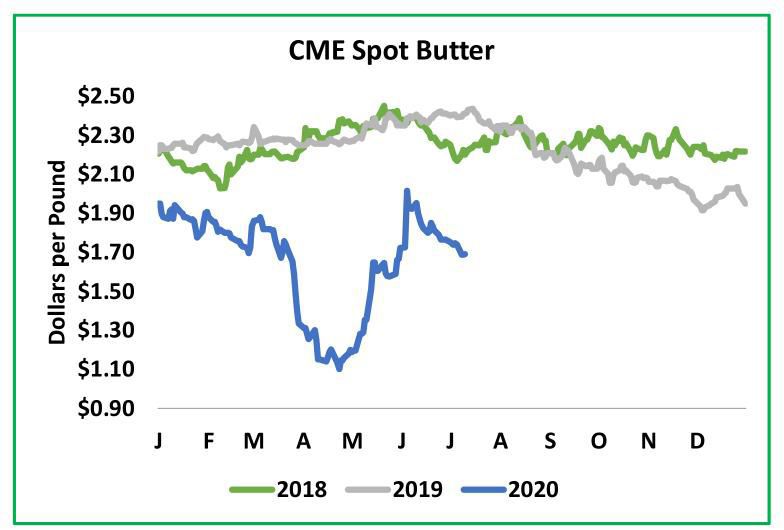 The milk-powder market perked up a bit. CME spot nonfat-dry milk advanced 0.75 cents to $1.0175. Milk powders made big strides July 7 at the Global Dairy Trade auction, boosting the index to its largest gain since November 2016 – an increase of 8.3 percent from the previous event. Skim-milk powder rallied 3.5 percent to the equivalent of nonfat-dry milk at $1.30 per pound, after adjusting for protein. Whole-milk powder vaulted 14 percent. Global demand for milk powder has proven surprisingly strong despite the woes of the pandemic. Increased skim-milk-powder prices are making U.S. milk powder increasingly competitive. On the domestic front nonfat-dry milk is moving out of warehouses into cheese vats. 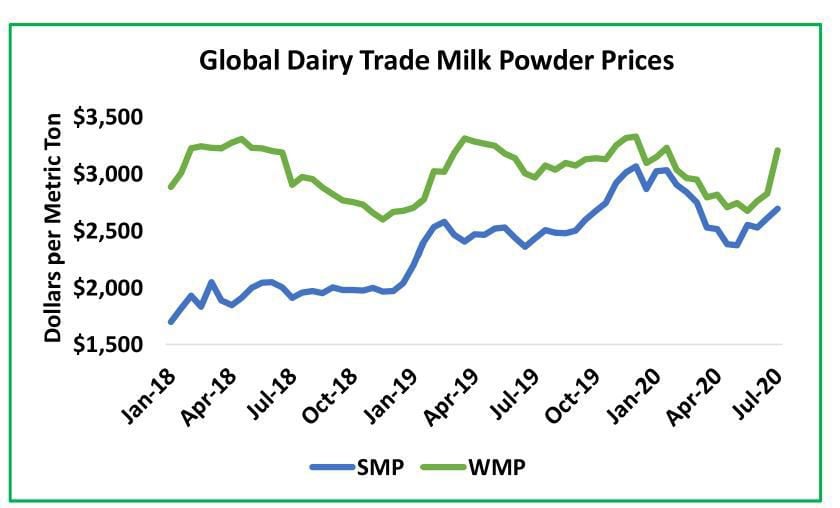 CME spot whey decreased 4.25 cents this past week to 28.75 cents, the worst value since this past November. Robust cheese production is generating a steady stream of whey and manufacturers are largely eschewing value-added whey products. So whey powder is accumulating. With gyms around the country sitting empty, sales of protein whey products have slowed. Those who exercise regularly may find ways to incorporate dairy protein into their at-home regimens, but they likely won’t try new products or make an impulse purchase until they’re back in the gym. Dry whey has become plentiful and cheap enough to attract a bit more foreign business, but stocks continue to grow. Whey is likely to remain a drag on Class III values. 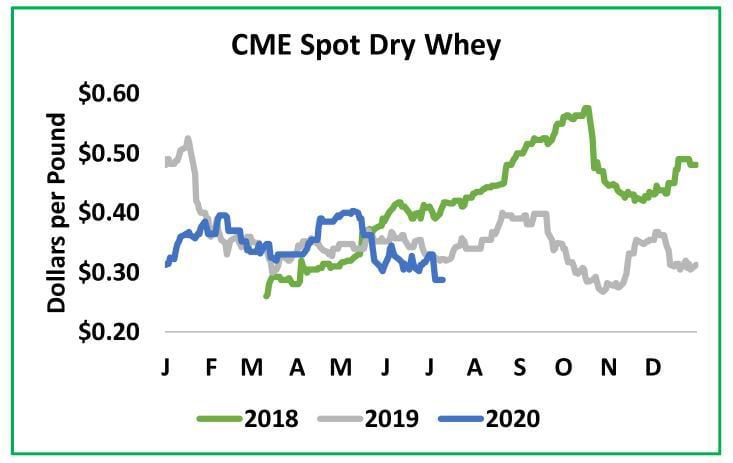 Class III futures followed Cheddar blocks to better prices. The July contract rallied $1.23 to $24.20, within shouting distance of the all-time best of $24.40 set in October 2014. August Class III soared $2.09 to $23.04. During the past month the August contract has added more than $6 per hundredweight, a staggering increase. Deferred Class III futures posted double-digit gains. Class IV futures settled in the red, with 30-cent to 40-cent losses on the front of the board. Extremely good Class III values are likely encouraging dairy producers to add as much milk as they can, but the heat may stymie their efforts. 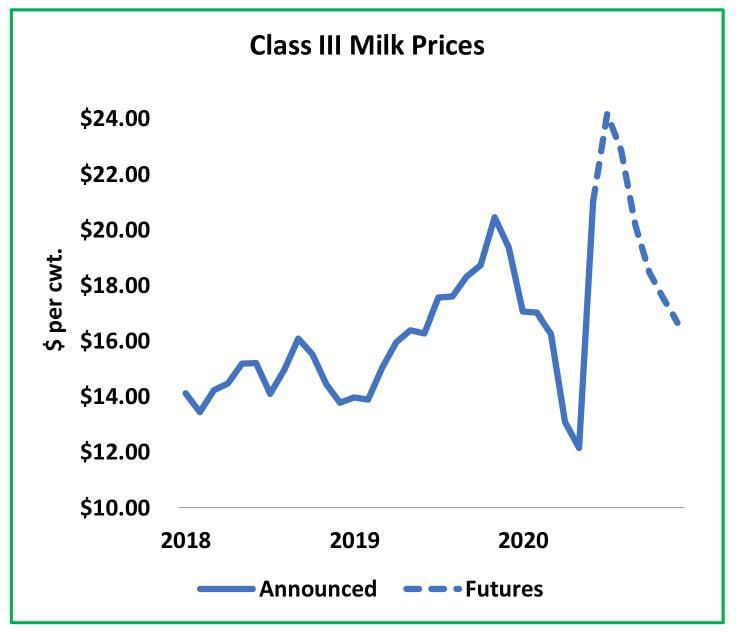 The grain markets rallied early in the past week as a hot and dry forecast raised concerns about yields. The markets had a mid-week boost after the USDA reported a sizable sale of U.S. corn to China, and China’s ag ministry projected continued imports. For years China has relied on its massive corn reserves and done its best to keep out foreign grain. Now the Chinese reserve is dwindling. China’s rapidly modernizing hog industry requires more feed than its backyard herd did in the past.

The USDA published its monthly update to crop-balance sheets, but they held no surprises. The market shrugged and turned its attention to the forecast. Better-than-expected rains dampened the bulls’ earlier enthusiasm. The corn crop will still need to pollinate in the middle of a heat wave and there are plenty of dry spots. But there’s an abundance of grain in the world. Supplies will be ample even if this year’s corn crop falls a little short of its full potential. September corn settled at $3.3625 per bushel, a decrease of 7.25 cents from July 9. August soybeans closed at $8.87, a decrease of 4.25 cents.