The industry can’t fill the parlor and the bulk tank immediately, but the impact of the new trajectory will surely mean more cows and more milk.

The industry can’t fill the parlor and the bulk tank immediately, but the impact of the new trajectory will surely mean more cows and more milk.

The fireworks boomed on La Salle Street in Chicago a week ahead of schedule. Chicago Mercantile Exchange spot Cheddar blocks rocketed to an all-time best at $2.81 per pound. Then they flamed out, fading to $2.575. That was a decrease of more than 12 cents from the best prices and 7.5 cents less than the previous Friday. 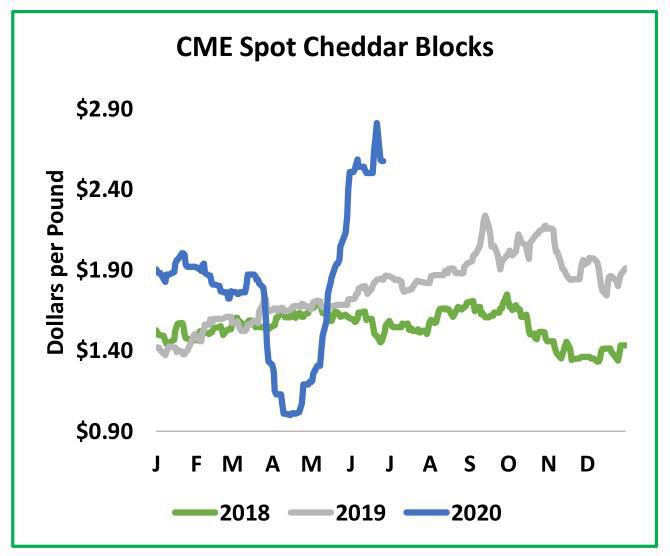 Barrels rallied 11.5 cents this past week to $2.40, only 2.5 cents off the record set earlier this month. Fears that the meteoric rise was all sparkle and no substance were doused by buyer willingness to make purchases rather than sit on the sidelines and let the selloff run its course. Four loads of blocks changed hands June 25 and 26 at $2.575, confirming that end users are still ready to pay historically big prices for cheese. The mid-week prices increased the weekly Cheddar block average to 11.85 cents more than the already lofty values established the week before. Weekly average spot values help to set the final price for July Class III milk.

Cheese inventories typically grow in the spring but this year they decreased 1.6 percent from April 30 to May 31 thanks to the strong draw from retailers and from restaurants readying to reopen. Still at 1.45 billion pounds cheese inventories were 5 percent greater than in May 2019. There’s a mountain of aging cheese in storage and there are signs the fresh-cheese shortage is starting to ease. While at least one buyer stepped into the fray of the spot markets, others were more reticent. 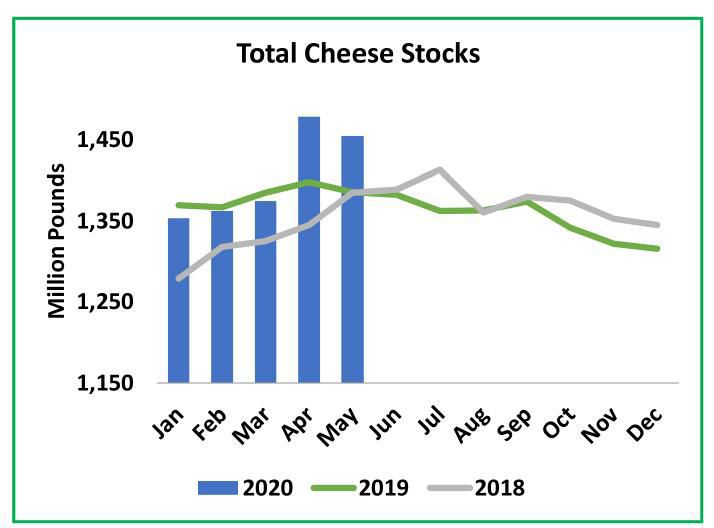 Meanwhile milk is noticeably easier to come by in the Upper Midwest. Cheesemakers paid steep premiums for spot milk in the first three weeks of June but now they are buying at a discount. That suggests they have all the milk they need even as some plants run seven-day work weeks. Across the nation processors are fortifying with powders to boost throughput. The industry is likely to have more than enough cheese later this year.

With cheese vats full to the brim, whey output is going strong and inventories are building. CME spot whey decreased 1.5 cents this past week to 31.25 cents. Most Class III futures finished deep in the red. But the July contract cheered the spot-market spectacle and increased 46 cents this past week to $21.64 per hundredweight.

Other spot markets fizzled. Spot butter decreased 8.5 cents to $1.765. There were 380.2 million pounds of butter in cold storage as of May 31, 21.2 percent more than the prior year and the greatest monthly total since 1993. Butter makers are trying to pare down stocks by cutting and wrapping blocks into retail-friendly packaging because food-service demand for bulk butter is limited. Churns are mostly idle as ice cream and cream-cheese production is keeping cream values out of reach. 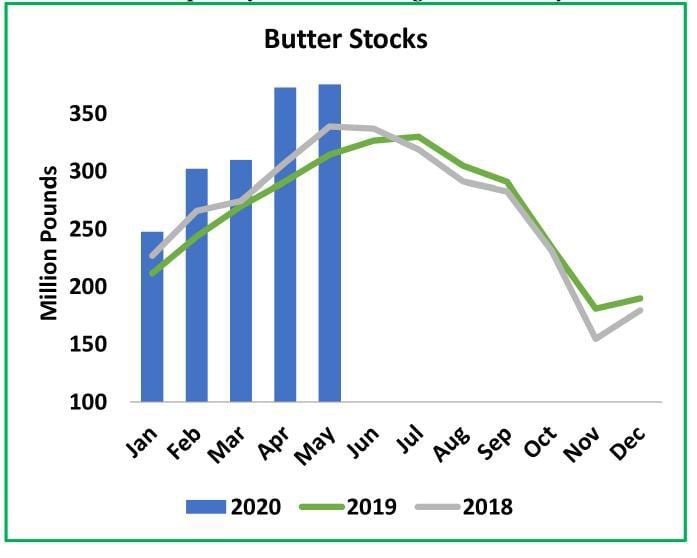 CME spot nonfat-dry milk decreased 1.25 cents to $1.02. Milk-powder buyers seem inclined to wait for prices to break before increasing their purchases. With both butter and powder losing ground, Class IV slumped. Second-half futures contracts lost an average of 56 cents this past week. June, July and August futures are floundering at less than $15.

It’s difficult to slam on the brakes in the spring and then open the throttle in the summer. But $20 milk is a powerful motivator and dairy producers are doing their darnedest. Whatever they did to reduce milk output – feeding a cheaper ration, drying early, culling aggressively or milking less frequently – they are undoing. The industry can’t fill the parlor and the bulk tank immediately, but the impact of the new trajectory will surely mean more cows and more milk.

In the three weeks ending June 13 dairy-slaughter volumes decreased 12 percent from the 2019 pace, an about-face from April and early May when slaughter accelerated to a 34-year record. Springers are selling for the most in more than two years, which suggests dairy producers are anxious to fill every stall. Processing capacity and heifer inventories are likely to put a ceiling on expansion eventually but the industry is clearly leaning in that direction. After another dismal spring dairy producers have surely earned the thrill of a big summer milk check. They should milk it for all its worth. But it seems likely the industry will overdo it and wake from the celebratory season with a harrowing hangover. 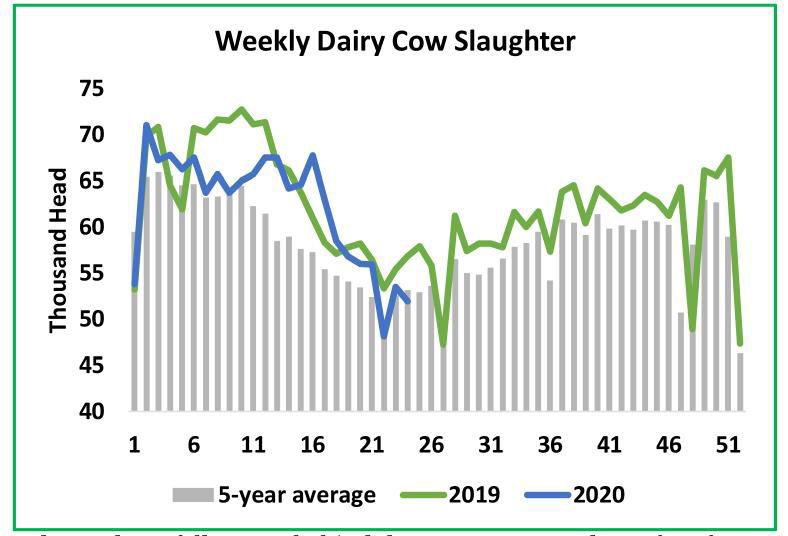 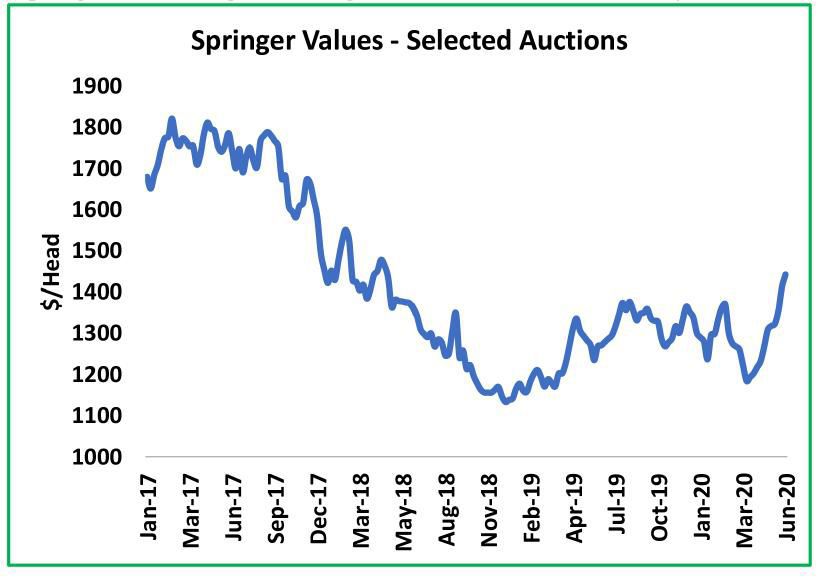 The grain markets took a big step back this past week. September corn futures decreased 18 cents this past week to $3.1925 per bushel, near the life-of-contract worst price. August soybeans settled at $8.60, a decrease of 16 cents. After widespread rains crops are thriving. The Corn Belt’s two-week forecast looks nearly ideal. Meanwhile demand is in question. The United States and China are at odds on international diplomacy. Beijing has tacitly warned U.S. officials that could put “Phase One” agricultural purchases in jeopardy. China has already cleaned out Brazil’s soy stocks and will need to shop in the U.S. eventually. But those geopolitical disagreements give China every incentive to slow purchases to gain leverage. The feed markets are caught in the crossfire.