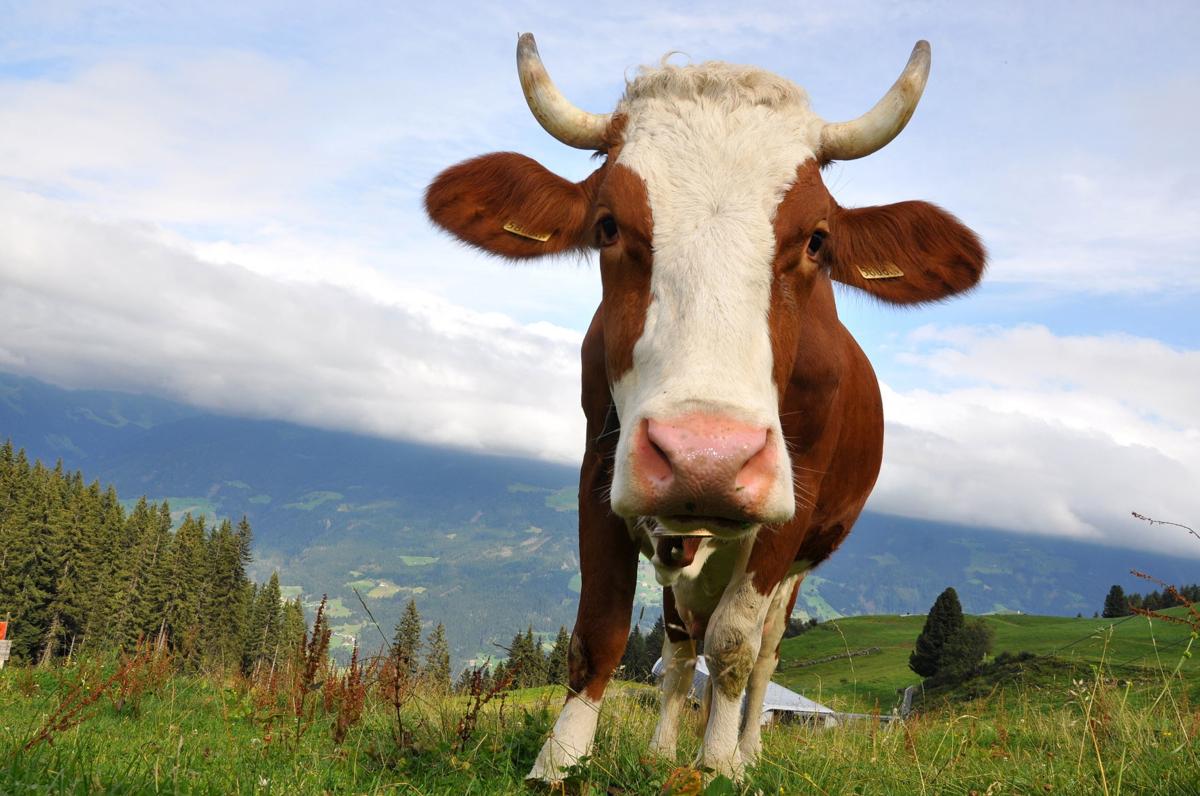 Dairy markets play in the clouds as prices improve.

Dairy markets play in the clouds as prices improve.

The cheese markets showed no sign of altitude sickness as they clambered around with ease at lofty elevations. Chicago Mercantile Exchange spot Cheddar barrels increased 1.5 cents this past week to $2.415 per pound, just a penny from the all-time best prices. Blocks increased a dime to $2.675. Although there’s plenty of milk, there’s a shortage of fresh cheese; demand remains resilient despite the price.

Less milk meant less cheese in May, setting the stage for the summer rally. U.S. cheese output was less than 1.1 billion pounds in May, a decrease of 0.7 percent from a year ago. Cheesemakers directed more milk to Mozzarella to satisfy consumer voracious appetites for pizza. Cheddar production decreased 0.5 percent from the previous year. Manufacturers likely put some of that Cheddar into aging programs, making it unavailable to those seeking cheese in Chicago. 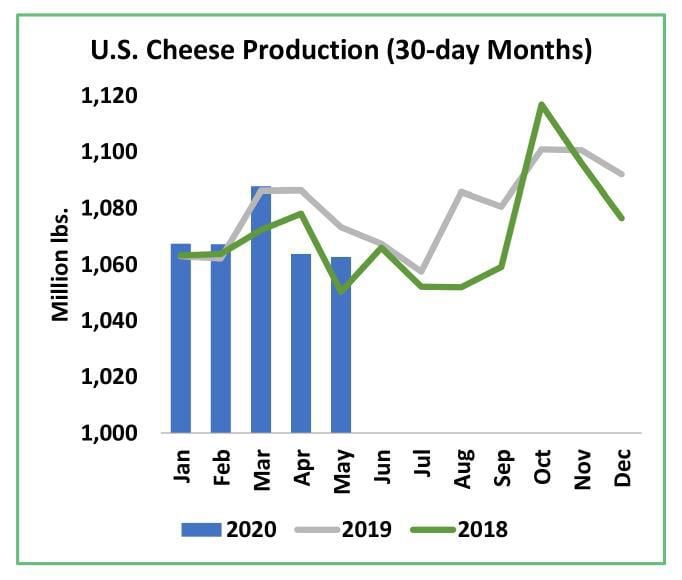 Exports further tightened supplies. U.S. cheese was a bargain earlier this year; foreign buyers took advantage. U.S. cheese exports increased to 78.5 million pounds in May, an increased of 7.5 percent from a year ago and the third-greatest monthly volume on record. Shipments to Southeast Asia ballooned and South Korea took Mexico’s usual place as the best market for U.S. cheese. 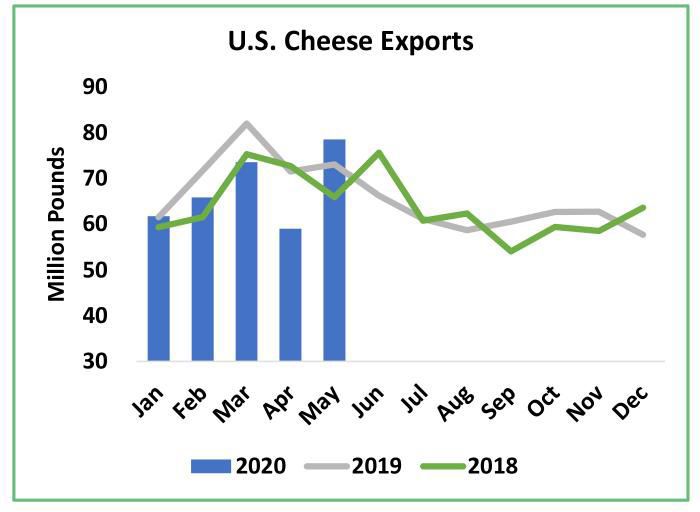 Excellent-protein whey products are losing value; manufacturers are directing more of the whey stream to driers. Despite reduced cheese output in May, production of dry whey for human consumption increased 9.1 percent year-over-year. Whey-powder inventories increased accordingly. Stocks of dry whey increased to 29.3 percent more than year-ago levels. Manufacturers were able to move quite a bit of whey abroad. Dry-whey exports increased 24.7 percent from the previous year in May. But whey still abounds. CME spot whey continues to hover in the low-30-cent range. This past week it rallied 1.75 cents to 33 cents per pound.

The butter market lost ground once again. CME spot butter decreased 2.75 cents this past week to $1.7375. Print butter is flying off the shelves as consumers continue to cook and bake at home. But food-service demand is fitful and likely to worsen as increasing infection rates scare would-be restaurant patrons from dining out. Conferences, concerts and arena sports remain on hiatus, which means a lot of foregone food-service sales. Cream is expensive and churns are running slowly, but we made enough butter in April and May to last a while. Butter output totaled 178.3 million pounds in May, an increase of 4.9 percent from the prior year. 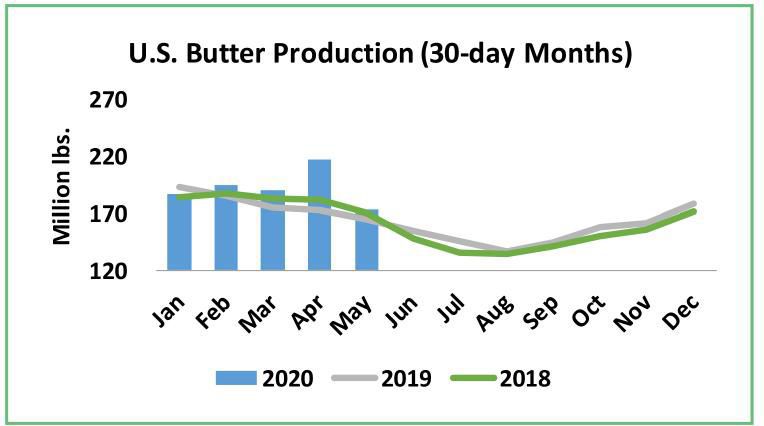 CME spot nonfat-dry milk decreased a penny this past week to $1.01. The milk-powder market seems stable. Dryers ran much slower in May than they did in March and April, in the worst days of the spring surplus. Depressed milk prices and co-op restrictions clearly accomplished their awful task, bringing milk supplies in-line with capacity. Attractive pricing kept nonfat-dry milk moving to end users; milk-powder inventories declined noticeably from April to May. But at 344.7 million pounds stocks remained burdensome in late May. Thankfully product is still moving quickly. May nonfat-dry-milk exports reached a record of 174.5 million pounds, driven by strong shipments to Southeast Asia. Inflated cheese prices are also helping to use milk powder as cheesemakers fortify vats. But some end users are starting to substitute cheap whey-protein concentrate in favor of nonfat-dry milk. 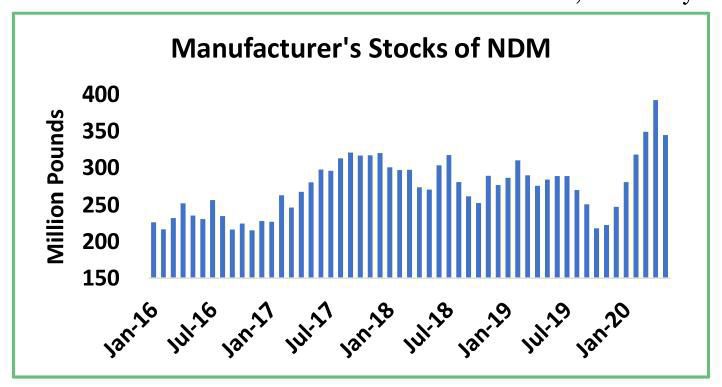 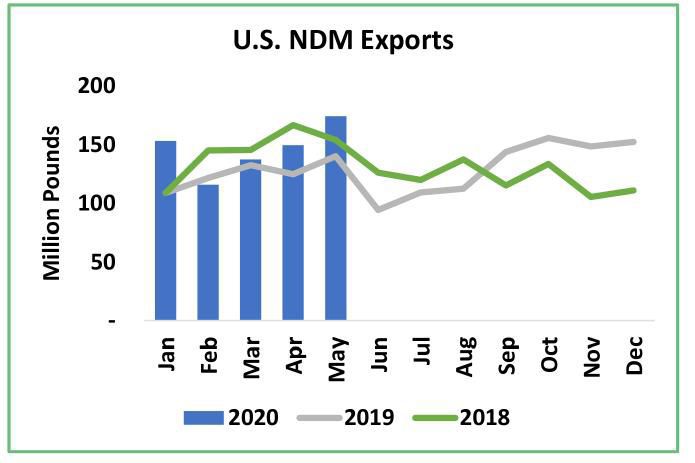 Class IV futures finished steady to a little less than the previous Friday’s settlements. Strong cheese markets helped Class III futures. July Class III soared $1.33 to a life-of-contract best at $22.97 per hundredweight. August Class III rallied $1.88 to $20.95, also a new closing best. Class III futures all gained considerable ground. The U.S. Department of Agriculture announced the June Class III price at $21.04, an increase of $8.90 from the paltry value posted in May. At $12.90 the June Class IV price was still painfully inadequate, but it was $2.23 better than May Class IV.

Those Class III values will encourage dairy producers to increase milk production but they could struggle to do so in the middle of the summer. Dairy producers in the Midwest are likely to lose milk as cows face at least two weeks of unusually warm temperatures. But reduced slaughter volumes and increased milk values suggest the industry will do its best to make considerably more milk than was expected a couple of months ago.

Traders had been leaning hard into massive large short positions, creating a pile of dry tinder for a raging short-covering rally. USDA lit the spark on June 30, when it reported a steep decrease in corn area in its annual acreage report. The agency estimates farmers planted 92 million acres of corn this year, a steep decrease of 5 million acres from the March Planting Intentions survey. Most of the acreage was lost in the Dakotas, where 2019’s flooding plagued farmers into this season. The 2019 harvest continued well into the spring of 2020 in North Dakota. Farmers who were still combining during the planting window were not inclined to rush to plant a late crop of $3 corn. Despite the hefty decline relative to expectations, farmers still seeded more corn acres than they have in each of the past three seasons. And the crop is off to a great start. But the forecast is hot and dry, which could cap yields at less than potential. U.S. and global corn stocks are ample so it will take some real crop issues to better the market further.

The USDA estimates 2020 soybean area at 83.8 million acres, an increase of just 300,000 acres from the March planting survey. That was less than expected so the bean markets had a boost this past week as well. August soybeans settled at $8.9125 per bushel, an increase of 31.25 cents from the previous Friday. September corn closed at $3.435, an increase of 15.25 cents for the week.