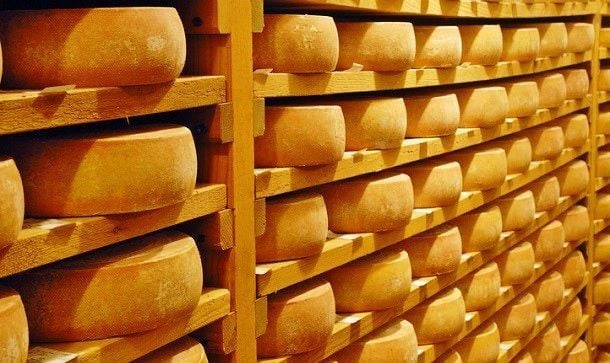 Cheese blocks are holding at more than the best price posted the previous year. Prices are lofty enough to support July Class III at $24.55 per hundredweight and August at $21.03 per hundredweight.

Cheese blocks are holding at more than the best price posted the previous year. Prices are lofty enough to support July Class III at $24.55 per hundredweight and August at $21.03 per hundredweight.

The cheese markets tumbled once again this past week. Blocks decreased 28.75 cents to $2.2525 per pound. Spot Cheddar barrels also decreased sharply July 30 and 31. They closed at $2.235, a decrease of 21.5 cents since the previous Friday. Despite the setback cheese prices are still historically good. Blocks are holding at more than the best price posted the previous year, albeit by a scant 1.5-cent margin. Prices are lofty enough to support July Class III at $24.55 per hundredweight and August at $21.03 per hundredweight. 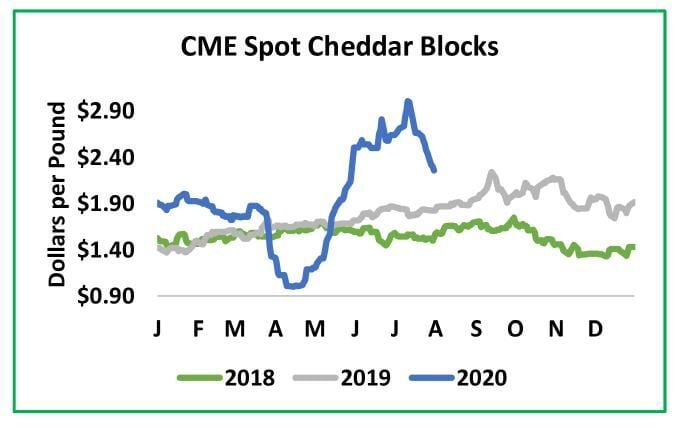 Midwestern cheesemakers are filling hearty orders. The U.S. Department of Agriculture’s Dairy Market News reports supplies of blocks and barrels in the Central region are “tight to nonexistent.” Mozzarella and provolone are moving quickly from the vat to pizza chains, who are still doing a brisk business. But in other regions orders are slowing. Food-service demand is waning; consumers are wary after this month’s spike in coronavirus infections.

The USDA announced another round of spending for the Farmers to Families Food Box program in September and October. Between the food boxes, CARES Act, Section 32 and Trade Mitigation programs, the USDA is expected to spend more than $1 billion on dairy-product purchases this year. The government is using a lot of cheese, which likely sparked the recent shortage and drove the spot market to all-time best prices. But recent prices signal that fresh commodity cheese is more readily available. Milk is plentiful and output is formidable. Waning spot milk prices in the Central region are incentivizing cheesemakers to fill vats.

More cheese means more whey. The Dairy Market News report of whey values around the country shows prices decreasing once again. Whey-protein concentrates are under considerable pressure, which is pushing more of the whey stream into powder. Nevertheless Chicago Mercantile Exchange spot whey rallied 0.25 cents this past week to 34.25 cents.

China’s appetite for foreign whey seems to be growing. China imported almost 123 million pounds of dry whey this past month, an increase of 84.2 percent from June 2019. That’s China’s greatest monthly volume since May 2018, before African swine fever devastated the country’s swine herd. China has strived mightily to rebuild its pig herd but progress has been slow. But by modernizing the industry China has likely boosted the amount of whey consumed per head. There are now fewer backyard pigs eating scraps and more in large modern facilities eating a sophisticated ration, which often includes whey for piglets. The United States has benefitted from the shift. U.S. whey exports to China reached a two-year best amount in June. But the trade war continues to bite. The U.S. share of China’s whey imports is much less than it was a few years ago, before the trade war flared. 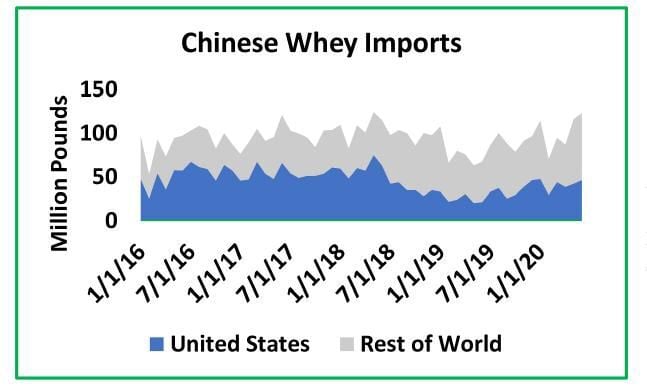 Chinese milk-powder imports fell short of the previous year’s substantial volumes, but they are still better than most years. New Zealand accounts for the lion’s share of China’s imports, but this past month they ceded a noticeable share of the skim-milk-powder market to the United States and several European nations. U.S. skim-milk powder is the cheapest in the world and it’s becoming even more competitive as the dollar weakens. But domestic demand is worsening. Both spot milk and whey-protein concentrate 34 percent are cheap. They’re edging out nonfat-dry milk at the margins. This past week CME spot nonfat-dry milk decreased 1.25 cents to 97.75 cents. 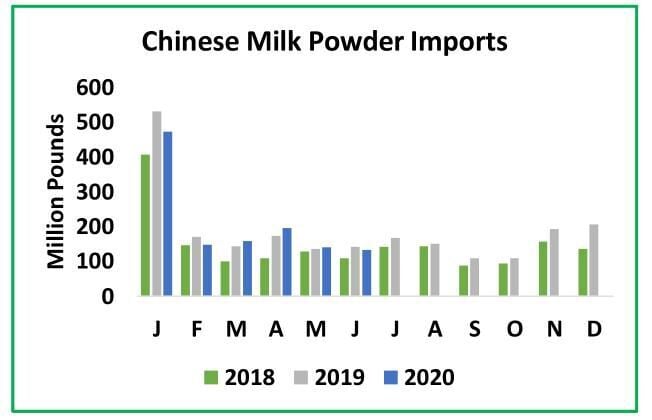 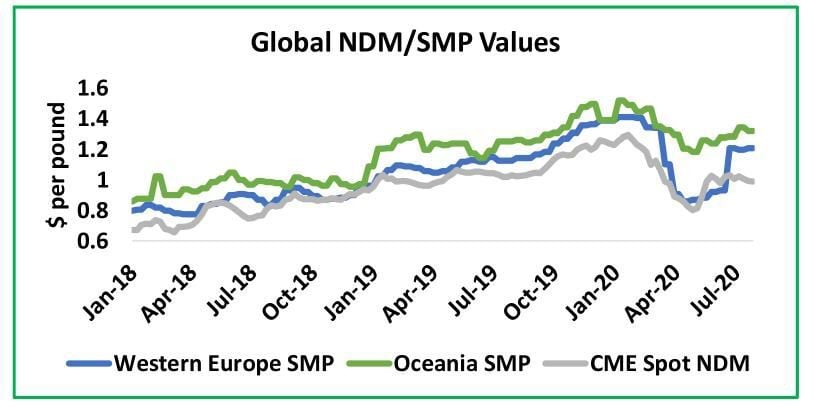 The butter market decreased sharply this past week as more-plentiful cream supplies and flailing food-service demand weighed on prices. CME spot butter decreased 12.25 cents to $1.6075, a two-month worst price. There was a lot of red ink at the CME this past week. Losses in Class III futures ranged from 15 cents in December to $1.23 in September. Most Class IV contracts shed between 40 and 50 cents. They remain dishearteningly depressed, at about $13 or $14. Depressed Class IV prices are anchoring the Class I market, which means dairy producers will suffer more depooling and a punishing producer price differential for the next few months.

Milk is likely to remain abundant as summer fades into fall. August will be balmy, as usual, but the forecast doesn’t call for any extreme heat. Dairy slaughter has decreased sharply, signaling producers are likely trying to fill their barns and the bulk tank. In the week ending July 18, dairy-cow slaughter decreased to 50,295, the least total for this time of year since 2011. For the year to date, dairy-cow slaughter is 3.6 percent behind the 2019 pace. 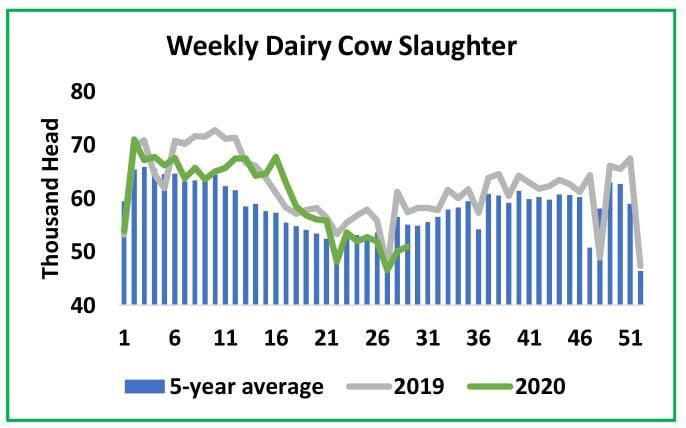 Potential milk production is increasing but demand remains in question. The school year will be unconventional at best, with many students learning from home at least part of the time. The back-to-school bump in fluid-milk consumption will lack its usual oomph. That will leave more milk for manufacturers even as they struggle to move dairy products through food-service channels. This past week the government confirmed the economic devastation we all witnessed in the second quarter, reporting a record-breaking 32.9 percent decline in economic output compared to the previous year. Plummeting consumer spending accounted for the bulk of the decline. Although things had started to bounce back in June, the fledgling economic recovery seems to have stalled in July as the virus rages on. The initial panic has calmed but the pandemic will continue to disrupt the dairy industry in myriad ways.

The feed markets retreated. September corn futures settled at $3.16 per bushel, more than a dime less than the previous Friday. September soybeans decreased 8.5 cents to $8.9025. Soybean meal decreased $2.30 to $291.20 per ton. Early this past week the USDA rated 72 percent of the corn and soybean crops in good or excellent condition, an unusually good rating for this time of year when the simultaneous stress of summer heat and pollination typically reduces ratings. Those ratings coupled with spotty but mostly favorable rains and mild summer temperatures project that crop yields could average more than the historic trend. There’s already a lot of corn in the bin so a bumper crop doesn’t leave a lot of room for a rally.