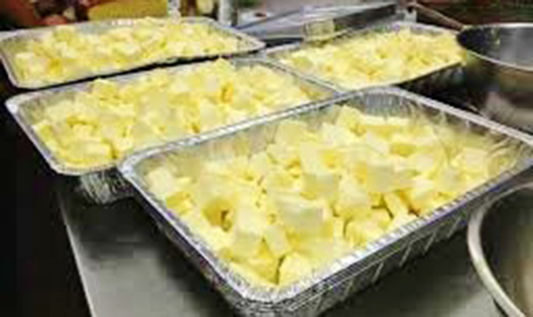 Butter prices are ultimately weighed down, once again, by heavy supplies and soft demand. Cream is abundant and churns are running hard.

After losing ground for more than a month, the Class III markets came roaring back this past week. Most contracts gained between 30 cents and 50 cents, and February Class III jumped 85 cents to $17.27 per hundredweight. February through December contracts posted life-of-contract best prices and all stand at well more than $17, a sign of health and good cheer.

Both cheese and whey contributed to the Class III comeback. Chicago Mercantile Exchange spot whey added another half-cent to reach 46.75 cents per pound. Both foreign and domestic demand for whey has been strong, helping to tighten stocks and increase prices consistently. Despite a late-week setback, CME spot Cheddar blocks advanced 3.25 cents this past week to $1.6175 per pound. Barrels climbed 4.25 cents to $1.4425. The cheese markets seem to have fallen far enough for now. Those values are reduced enough to compete for exports and to perhaps entice end users to make purchases they put off this fall, when the spot markets were unpalatably expensive. Even so demand remains a concern. The industry will need to move a lot of cheese through retail and export pipelines to compensate for holiday parties and restaurant visits that simply won’t happen this season. 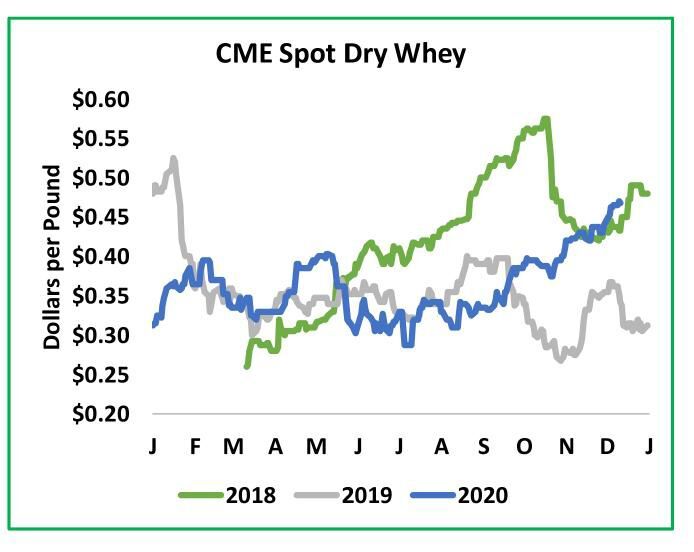 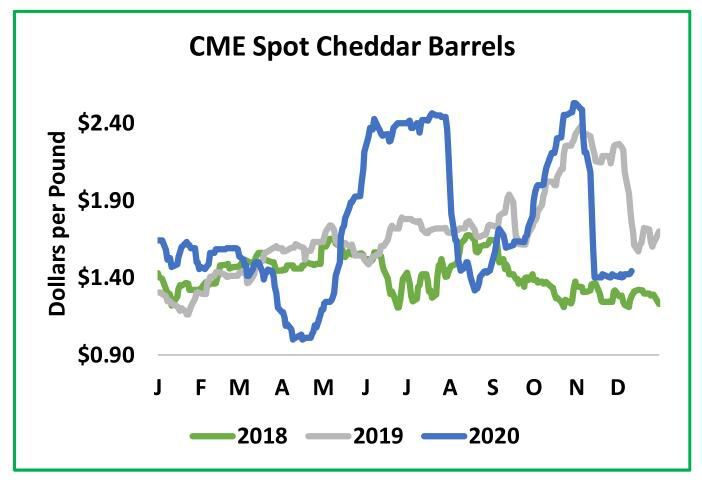 Dairy traders with ties to Washington, D.C., suggest that the incoming Biden administration would consider another round of the Farmers to Families Food Box program. That was the largest of several government efforts to purchase surplus food products to donate to those in need; it’s winding down quickly. Many food-bank suppliers have already used their share of the $500 million allocated for November and December, and government-funded cheese orders have disappeared. Hopes for renewed government purchases in 2021 likely contributed to this past week’s rally. But the next round of the program would take some time to administrate and would require more funding from Congress, which is far from guaranteed. President-elect Biden has nominated Tom Vilsack, the current head of the U.S. Dairy Export Council, to return to his former post as Secretary for the Department of Agriculture. But after watching the damage that expensive cheese prices caused to U.S. export opportunities, and their uneven benefits to dairy producers, Vilsack may not be inclined to rubber-stamp the program. The market could be counting its food boxes before they are packed.

The food-box program is not the only avenue for government aid. The previous Friday the U.S. Department of Agriculture pledged to spend $110 million using Section 32 funds in 2021. The spending is a pittance compared to the totals expended via all USDA food programs in 2020, but thankfully the funds will be directed where they might be most helpful and least disruptive. USDA plans to purchase fluid milk and butter. The unexpected news gave the butter markets a temporary lift this past week, but it didn’t last. Butter was ultimately weighed down, once again, by heavy supplies and soft demand. Cream is abundant and churns are running hard. CME spot butter held steady this past week at $1.48. The futures decreased. CME spot nonfat-dry milk slipped from the previous week’s pandemic-era inflated prices. It closed this past Friday at $1.1275, a decrease of 2.25 cents from the previous Friday. Foreign demand for milk powder has been strong, and American nonfat-dry milk is a bargain. That’s helped to keep U.S. nonfat-dry-milk inventories in balance despite robust output. 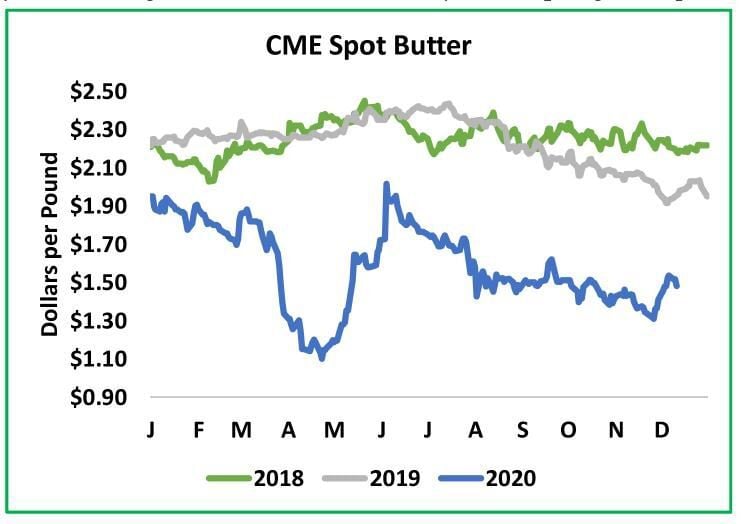 The driers are likely to stay busy. Dairy-slaughter volumes remain reduced, and dairy producers in the cheese states have every incentive to expand. After several massive milk checks, they likely have the capital and credit to make good on their ambitions. Meanwhile investments in better facilities and advances in breeding are translating to noticeably more milk. The mild start to the winter is also helping milk yields. Surplus milk is likely to weigh most heavily on Class IV markets, just as it did this past week. January and February Class IV lost 42 cents and 40 cents, respectively, while other contracts suffered more-modest losses. December and January Class IV continue to flounder at less than $14 per hundredweight and most 2021 contracts are at well less than dairy-producer cost of production. The wide spread between Class III and IV suggests that dairy producers in regions with lots of Class IV – or Class I – utilization will once again suffer depooling and a punishing producer price differential. The new year is likely to have an inequitable start. 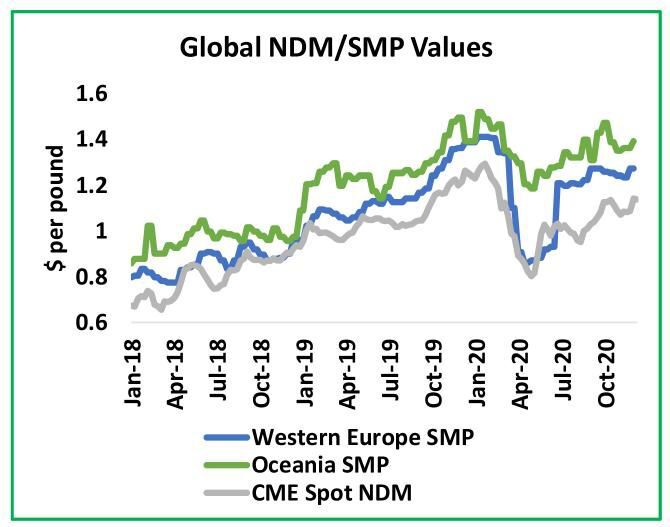 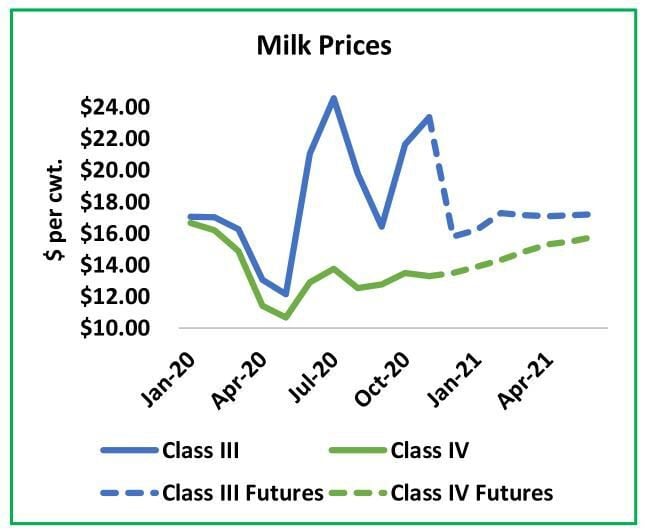 The feed markets were uncharacteristically quiet this past week. March corn settled this past Friday at $4.235 per bushel, an increase of 3 cents from the previous Friday. January beans closed at $11.605, a decrease of 2.5 cents. January soybean meal lost about $5 per ton to finish at $380.30 per ton.

The USDA updated its feed balance sheets Dec. 10. The agency made no changes to its U.S. corn-supply and -demand estimates and increased its assessment of U.S. soybean demand slightly. The markets greeted the report with a collective yawn.

U.S. crop exports remain strong. South American weather has improved, but there are still plenty of dry soils and farmers are hoping for more-regular rains. The western half of the United States is terribly parched, but that’s unlikely to meaningfully impact crop values until spring at the earliest.

Butter prices are ultimately weighed down, once again, by heavy supplies and soft demand. Cream is abundant and churns are running hard.