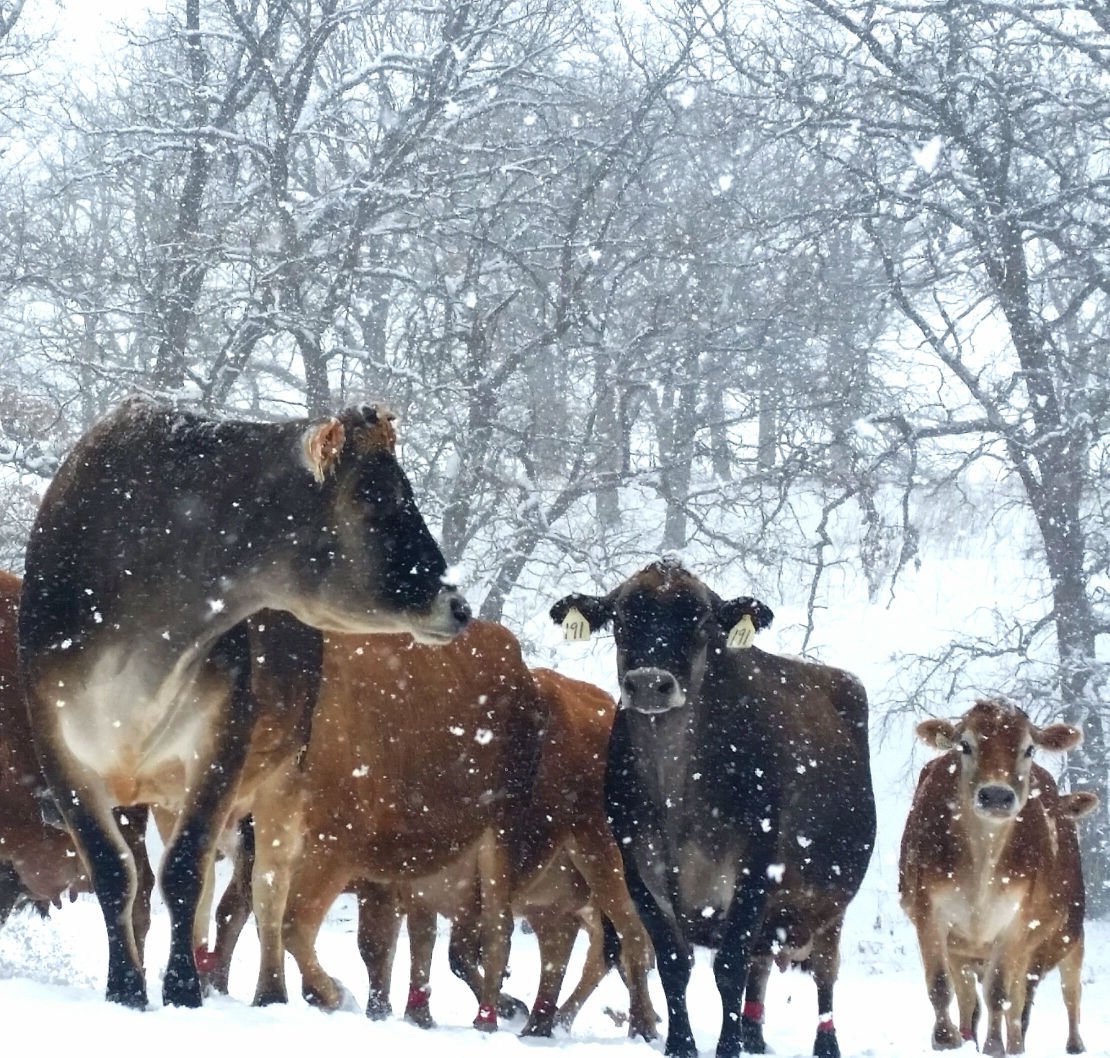 Milk yields have exceeded expectations for much of this year. But frigid temperatures and winter precipitation have set in across large swaths of the central and eastern United States. They’re expected to undermine cow comfort and decrease production in those areas.

Chinese New Year celebrations may be ushering in the Year of the Ox, but here in the U.S. dairy markets the bears are still very much present. Milk remains plentiful and manufacturers are picking up heavily discounted spot loads. Meanwhile inventories for most dairy products remain heavier than typical for this time of year. Demand from the food-service channel continues to limp along. Nevertheless the situation is evolving and some developments suggest that tighter markets could be on the horizon.

Milk yields have exceeded expectations for much of this year. But frigid temperatures and winter precipitation have set in across large swaths of the central and eastern United States. They’re expected to undermine cow comfort and decrease production in those areas. Inclement weather has also complicated logistics; icy conditions threaten the movement of raw milk and finished products in some locations. But in other regions milk production continues to forge ahead. Particularly in the west and southwest, output is increasing seasonally as spring approaches.

The government is poised to continue levying influence on the dairy markets in the coming months. The U.S. House of Representatives Agriculture Committee this past week approved $16 billion worth of measures for the purpose of supporting American food and agriculture. Within the bill, $4 billion could be used for additional purchases of agricultural goods including dairy products. Though the bill pertains to the administration’s COVID-relief package – and is thus subject to passage of the broader legislation – cheese and Class III futures nevertheless bounded to better prices on the news, with some nearby contracts trading limit up.

Overall the spot Cheddar markets had a relatively subdued week, as the reality of ample supply and lackluster restaurant demand continues to weigh on prices. Cheese manufacturers across the country emphasize the availability of spot milk; they’re running hard to absorb as much of it as possible. Following a Feb. 5 rally, Chicago Mercantile Exchange spot Cheddar blocks opened the past week with a modest gain. The market then lost steam for the remainder of the week. Despite a bounce Feb. 11, Cheddar blocks ultimately finished the week at $1.5575 per pound, a decrease of 8.25 cents from the previous Friday. Barrels remained unchanged at $1.50 per pound for most of the week before giving up a penny Feb. 12 to close at $1.49 per pound. Barrel trade was active with 29 loads changing hands, while 16 loads of blocks moved. 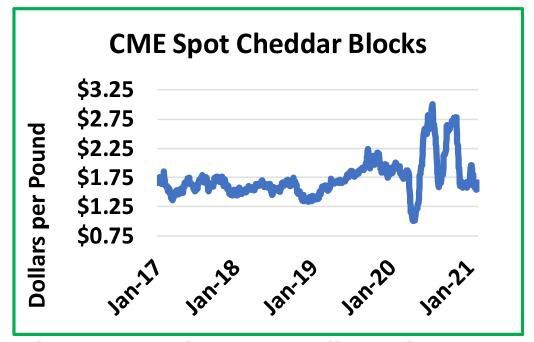 Spot butter prices managed to find some traction this past week. With the exception of a dip Feb. 10, CME spot butter prices increased all week, closing Friday’s trade at $1.395 per pound, an increase of 12.75 cents from the previous week. Market participants indicate that reduced prices have helped to generate additional demand, particularly from retailers. As U.S. prices continue to hold a significant discount to global competitors, interest from international buyers is growing. Where possible manufacturers are adjusting to produce butter that meets international standards. Even with the increase in demand, cream supplies remain available. With churns running hard, butter inventories are still heavy. Most participants expect the butter market to bounce after March 1, when the shift from old-crop to new-crop butter occurs. 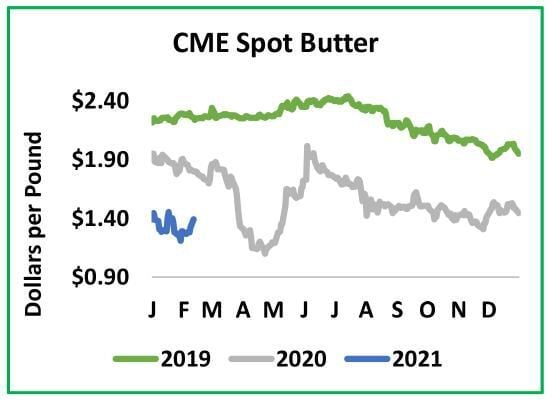 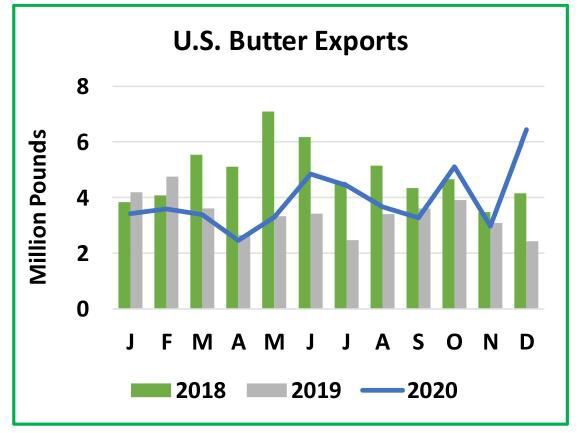 Nonfat-dry-milk markets were unsettled this past week. Inventories are heavy but demand has remained robust from both domestic and international sources, thus helping to keep some tension in the market. Condensed skim for dryers can still easily be obtained but nonfat-dry-milk manufacturers indicate prices have increased modestly. Spot nonfat-dry-milk prices lost .75 cents during the course of the week at the CME, ultimately closing at $1.1125 per pound with 16 loads trading hands.

The dry-whey market continues to demonstrate resilience, with prices increasing on strong exports and a production preference for greater-protein products like whey-protein concentrates and whey-protein isolates. U.S. whey exports hit a record in 2020, an increase of 23.4 percent year-over-year after considering the leap day, and with 38.9 percent of those exports destined for China. Exporters have reported that Asian demand for U.S. whey has slowed in recent weeks as the Chinese New Year approached, but demand is expected to rebound after the holiday. CME spot dry whey was able to add .75 cent during the week to close this past Friday’s session at 54.25 cents per pound. 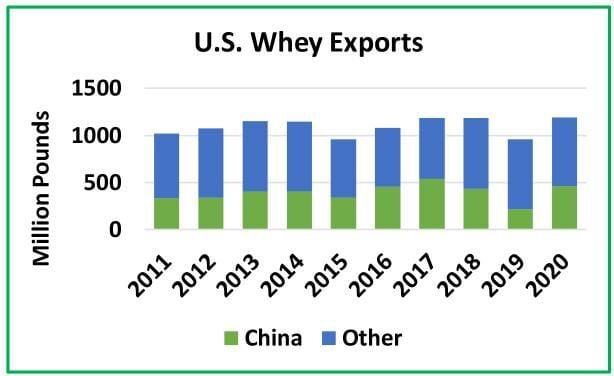 Class III milk futures were under pressure for most of the past week as they embodied the weakness of the spot Cheddar-block market. The House Agriculture Committee announcement imbued the market with a bit of strength, increasing several nearby contracts. But the rally was short-lived and by settlements Feb. 12 almost all 2021 contracts had decreased once again. Class IV milk futures remained quiet for most of the week. 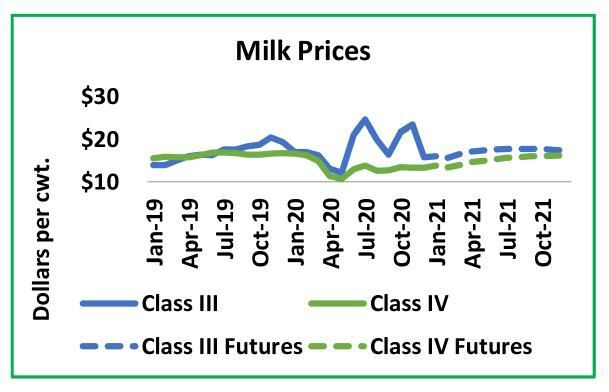 In its World Agricultural Supply and Demand Estimates report released Feb. 9, the U.S. Department of Agriculture made no edits to U.S. production estimates for corn or soybeans. But the agency did increase export estimates by 50 million bushels for corn and 20 million bushels for soybeans, resulting in reduced ending stocks. If the USDA’s current estimates come to fruition, ending stocks of corn and soybeans will be the smallest since the 2013-2014 marketing year. Corn futures decreased modestly on the report while soybean futures increased.

The trade continues to closely track the South American situation, where rainy weather has postponed the soybean harvest and thus delayed planting of the country’s second corn crop, known as the safrinha crop. If delays continue they could lead to a reduction in Brazil’s corn-production estimates and put additional pressure on global corn supplies.

The farm economy turnaround since August has sent ripples into the farmland market. Recent data from the Kansas City and Chicago Federal Reser…

Not even Punxsutawney Phil’s declaration of an extended winter could freeze the dairy markets this past week. Most commodities kicked off Febr…

The Ag Economy Barometer decreased in January to a reading of 167, a decline of 7 points compared to December and equal to the index’s Novembe…

Milk yields have exceeded expectations for much of this year. But frigid temperatures and winter precipitation have set in across large swaths of the central and eastern United States. They’re expected to undermine cow comfort and decrease production in those areas.