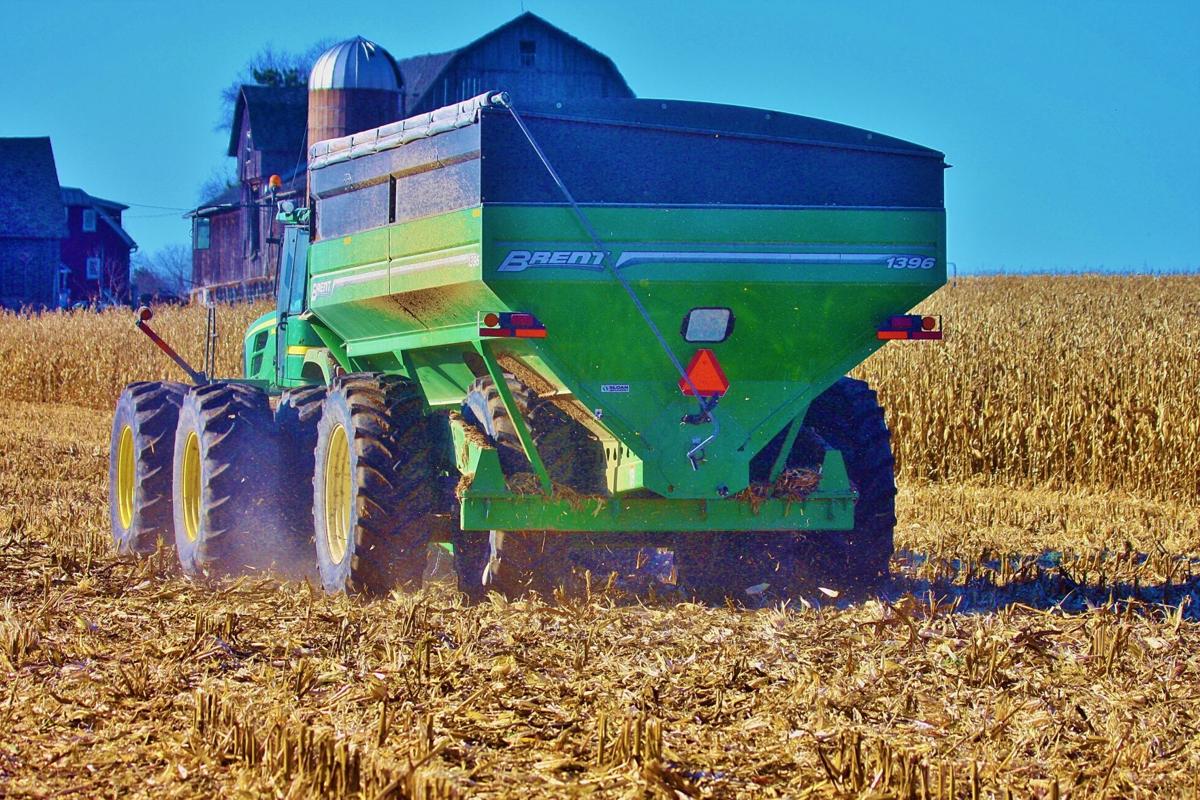 For the third month in a row, agricultural-producer sentiment weakened in October as the Ag Economy Barometer declined to 121, 3 points less than a month earlier. The modest decline in the overall sentiment index occurred as a result of producers’ weaker perceptions regarding both current and future conditions in the production-agriculture sector.

The Index of Current Conditions declined 5 points to 140 in October while the Index of Future Expectations decreased to 114 from 116 a month earlier. Recent weakness in farmer sentiment appears to be driven by a wide variety of issues, with concerns about input-price increases topping the list. 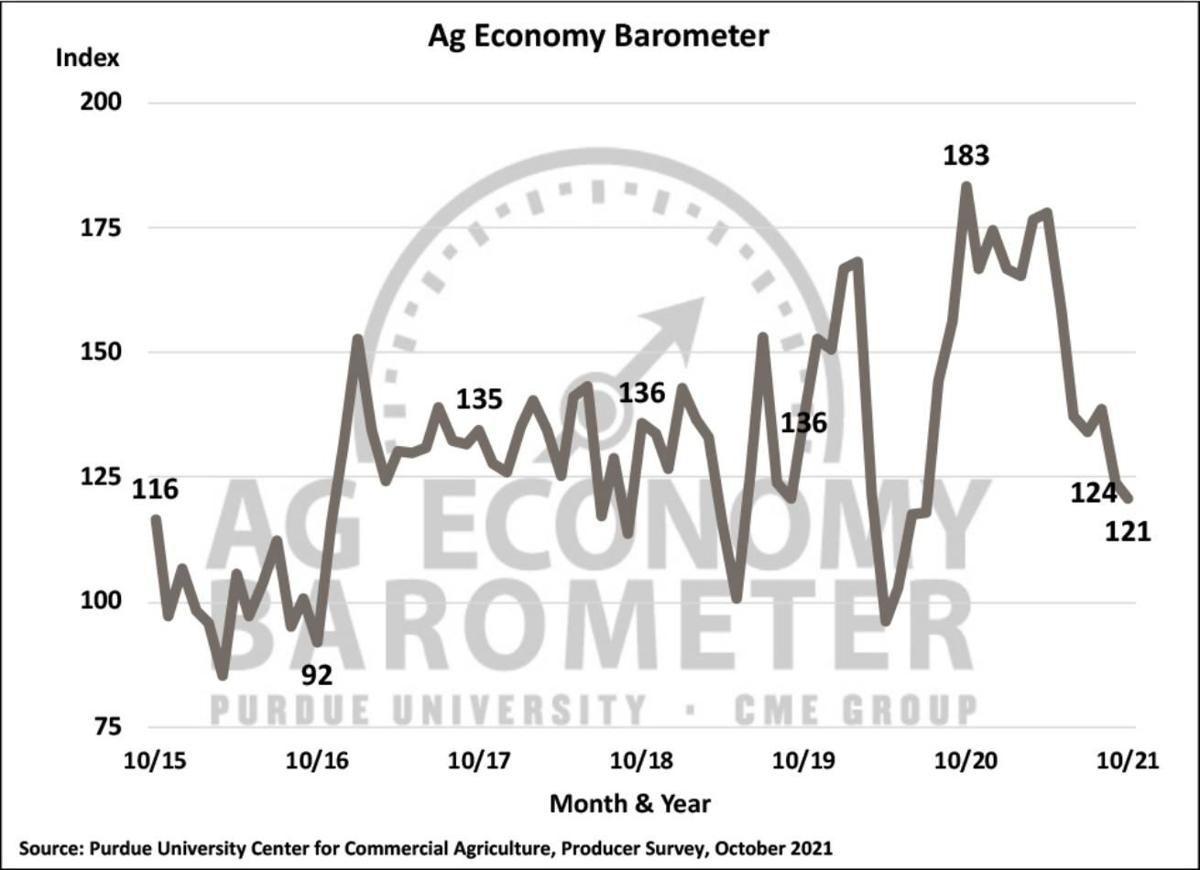 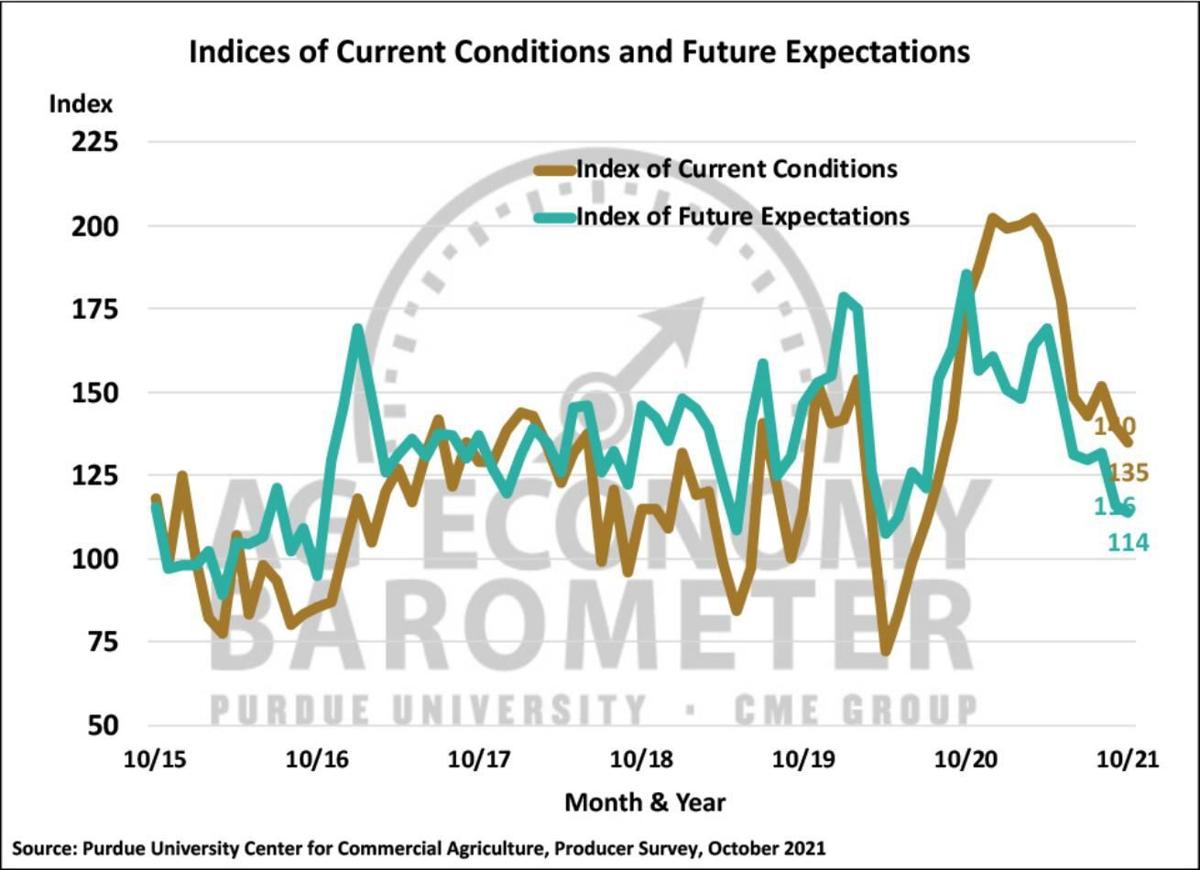 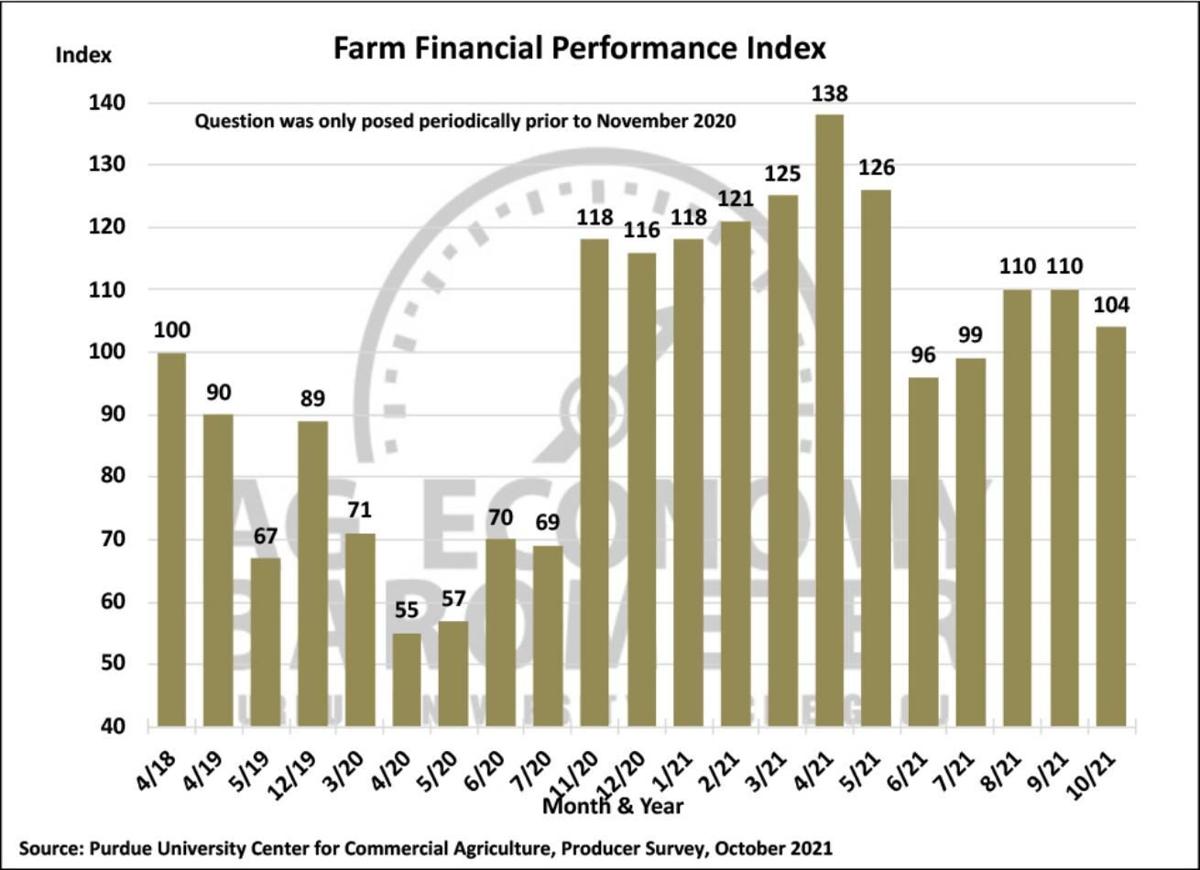 There was a modest improvement in the Farm Capital Investment Index in October, increasing 3 points to a reading of 46 compared to 43 in September. The investment index’s small improvement this month still leaves it 50 percent less than the optimistic level that existed at the start of 2021. Notably tight machinery inventories continue to hold back producer machinery-investment plans as almost four out of 10 respondents said machinery-purchase plans were impacted by decreased farm-machinery-inventory levels. The small increase this month was primarily attributable to fewer producers saying they planned to reduce their machinery purchases compared to a year earlier.

Weaker construction plans among producers this month weighed on the investment index. The percentage of producers planning to increase building and grain-bin construction on their farms decreased to 10 percent in October vs. 13 percent a month earlier. 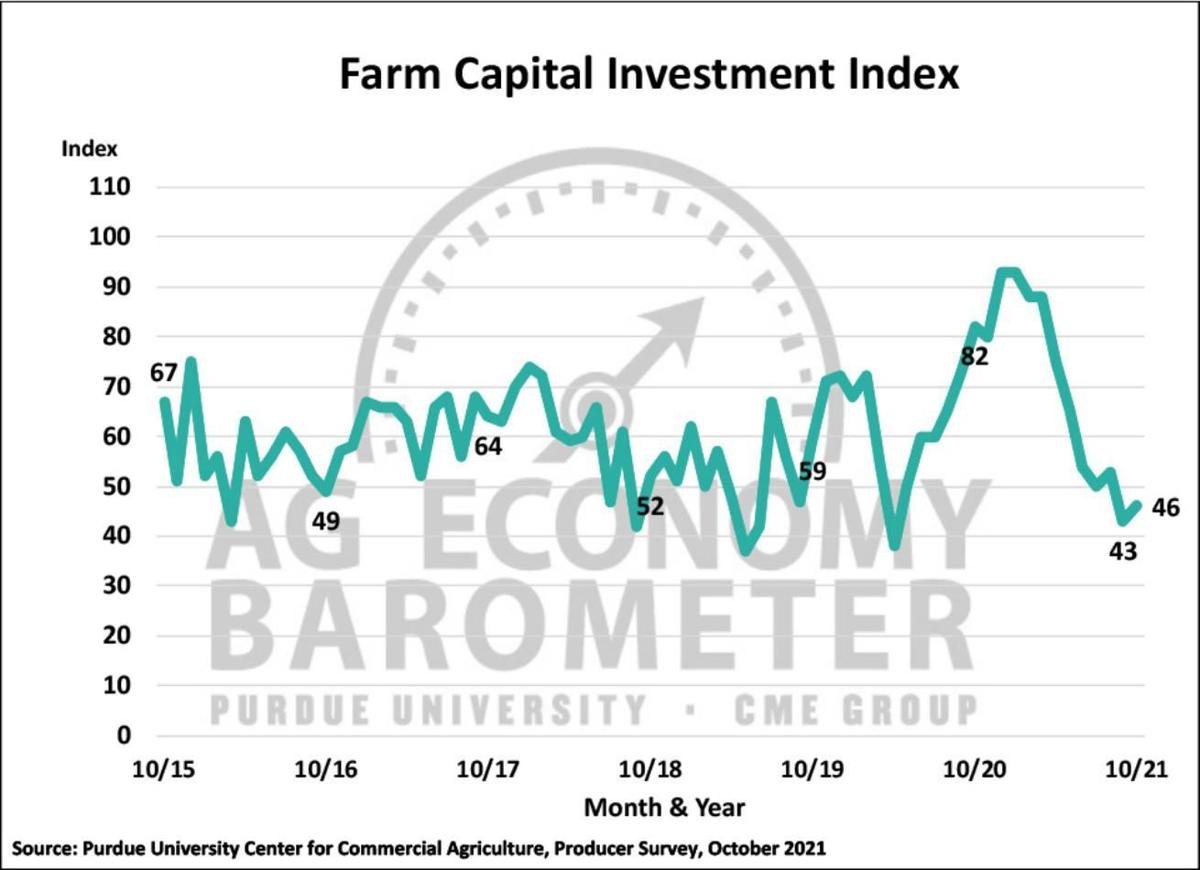 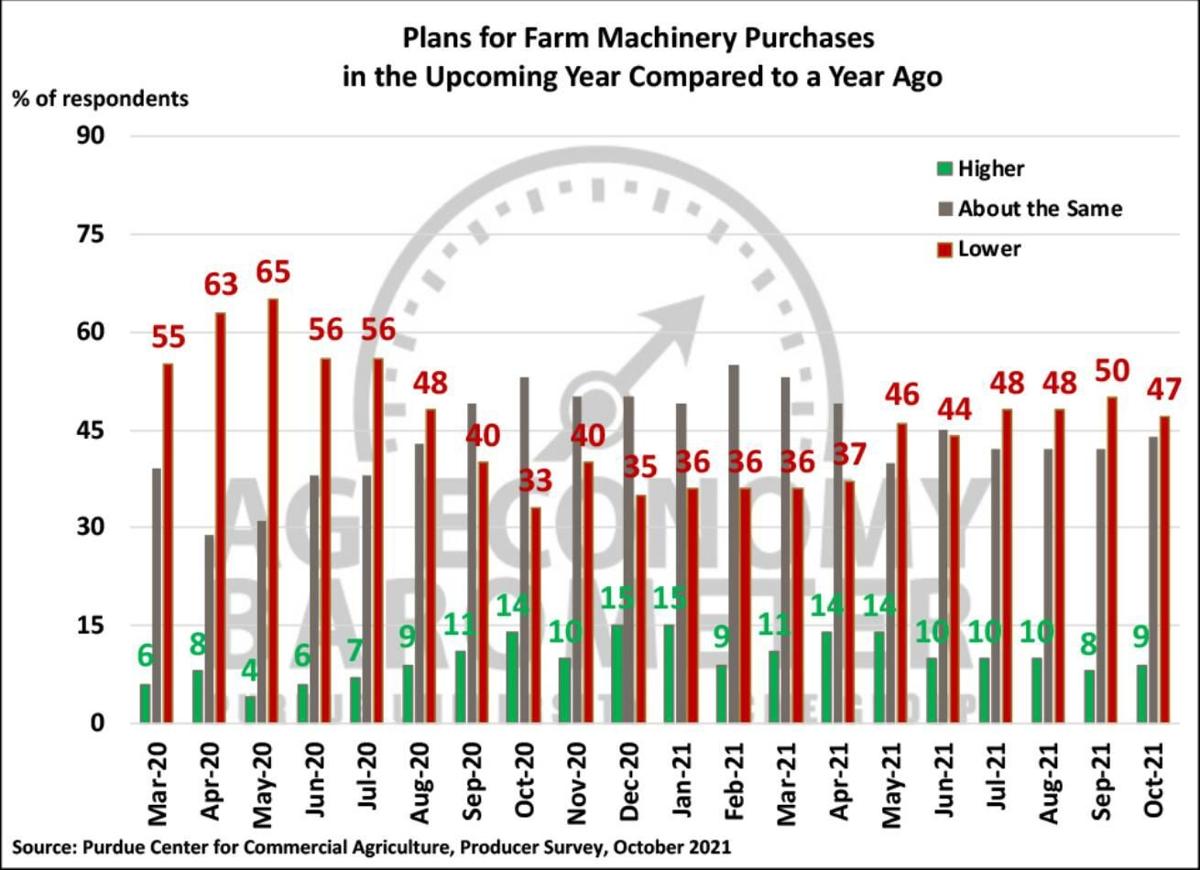 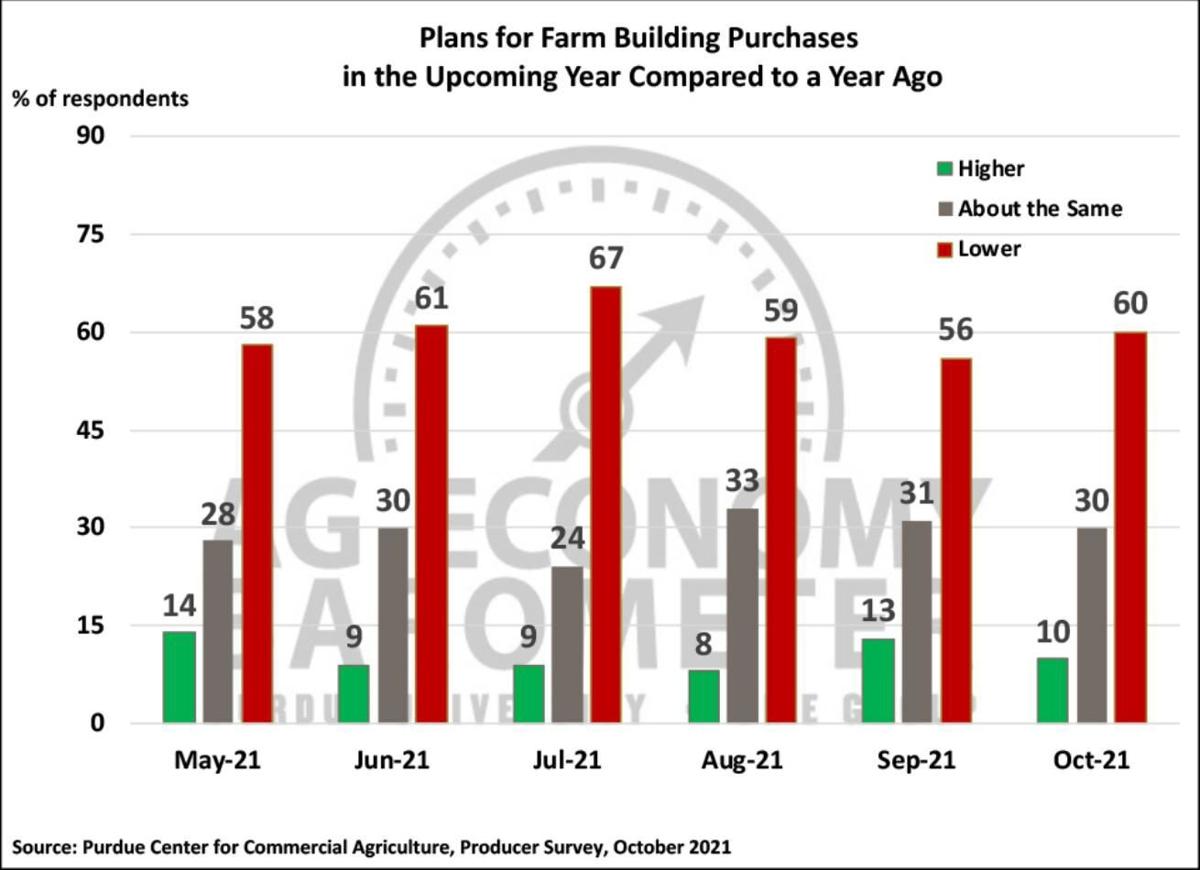 Increasing input costs are on most producer minds. This month more than half at 51 percent of producers in our survey said they expect input prices to increase 8 percent or more in the upcoming year. One-third of producers said they expect those prices to increase by 12 percent or more. The dramatic increase in fertilizer prices that’s taken place in recent months is a key factor in concerns about increasing input costs.

For example U.S. Department of Agriculture data from Illinois indicates that nitrogen prices in October 2021 increased 130 percent compared to a year earlier and increased by more than 40 percent compared to this past spring. Potash and phosphate prices experienced similar price increases. But concerns about increasing input costs also extend to other inputs such as seed, pesticides, and machinery repairs and ownership costs. Rapidly increasing input costs are leading farmers to become concerned about a cost-price squeeze on their operating margins. 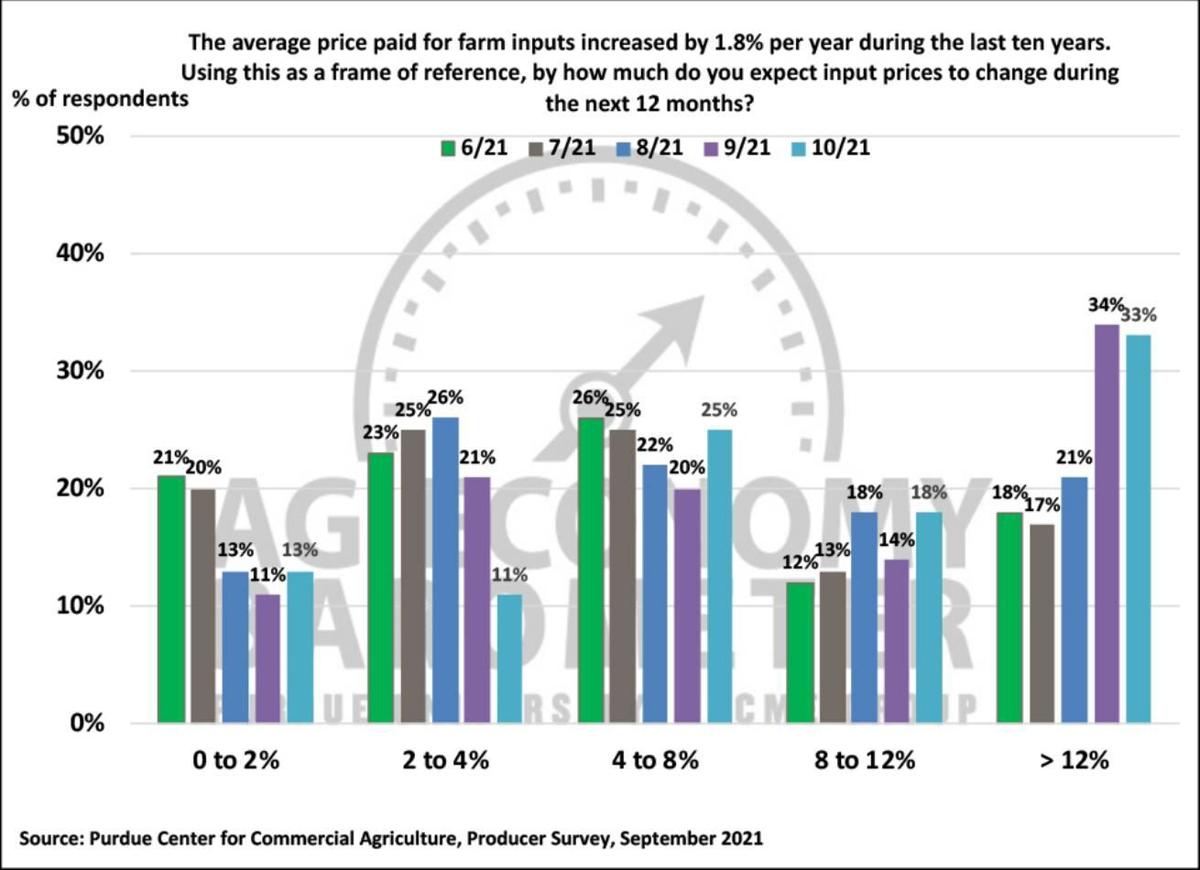 Despite the concerns expressed about increasing costs and their impact on operating margins, producers remain bullish on farmland values. The Long-Term Farmland Value Expectations Index set a new record this month with a reading of 161, 2 points more than a month earlier while the short-term index increased 1 point to 156. The one-point increase in the Short-Term Farmland Value Expectations Index left it just 3 points less than its record, which was set this past spring.

The optimism expressed by farmers regarding farmland values is consistent with reports of recent farmland sales, especially in the Corn Belt, with recent farmland auction prices at or almost at record numbers. But concerns about increasing input costs are starting to have a dampening effect on expectations for farmland cash-rental rates. In August and September almost half at 49 percent of the corn-soybean producers in our survey said they expected farmland cash-rental rates in 2022 to increase to more than 2021’s rental rates. In October the percentage of producers expecting increased farmland-rental rates decreased to 43 percent. The percentage expecting rates to remain unchanged increased to 55 percent compared to 50 percent in September. 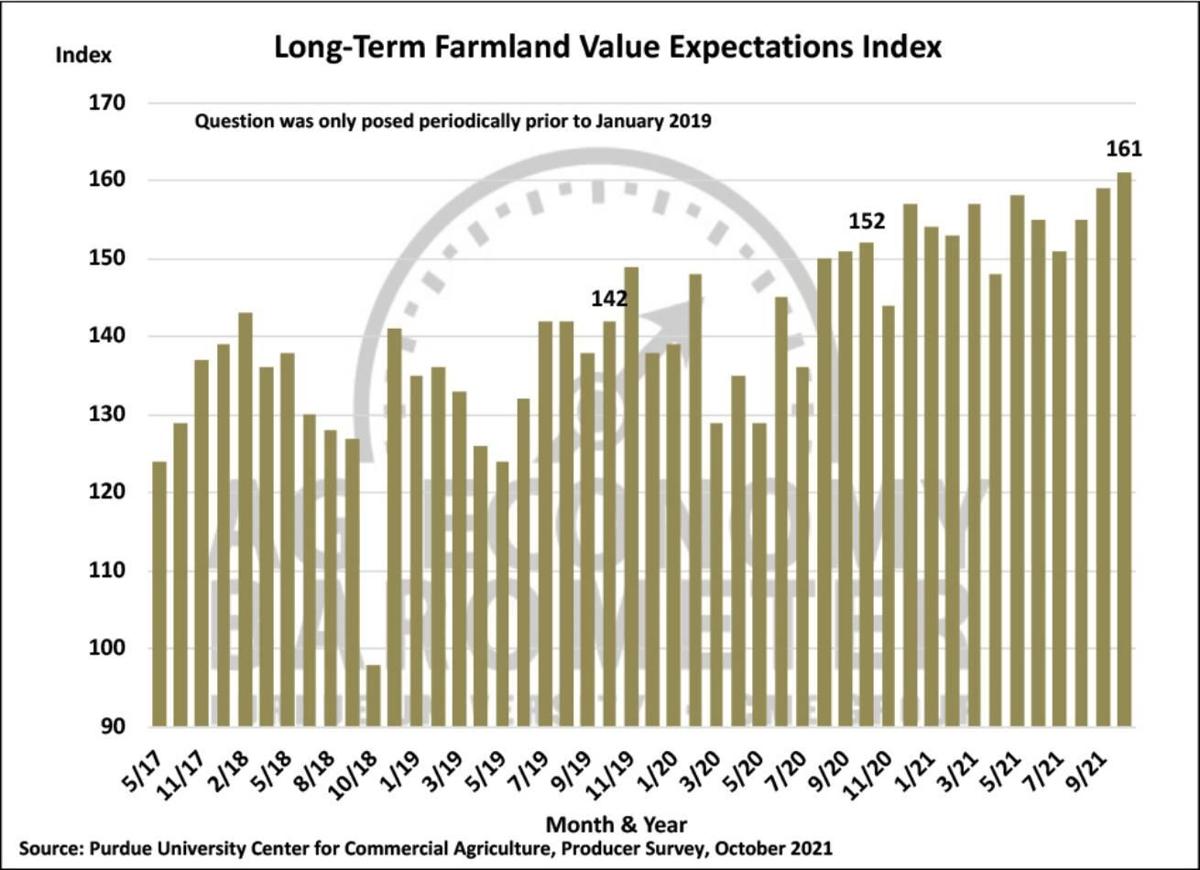 The possibility of leasing farmland for carbon sequestration continues to generate a lot of interest. In a follow-up to survey questions posed this past winter and spring, we asked this month’s survey respondents a series of questions about leasing farmland to capture carbon. In this month’s survey 29 percent of respondents said they were aware of opportunities to receive payments to capture carbon on their farms. When compared to survey results from this past winter and spring it appears that despite an increase in interest and publicity, awareness of carbon-capture opportunities by producers on their farms has not increased.

Among producers who are aware of opportunities to receive carbon-capture payments on their farms, only about 2 percent said they had discussed carbon-capture payments with any companies. This past winter and spring, an average of about 5 percent of survey respondents who were aware of payment opportunities said they had engaged in discussions with companies. Among the small number of producers who had discussed payments with companies, the most common payment offered was less than $10 per metric ton of carbon followed by payment rates of $10 to less than $20 per metric ton. 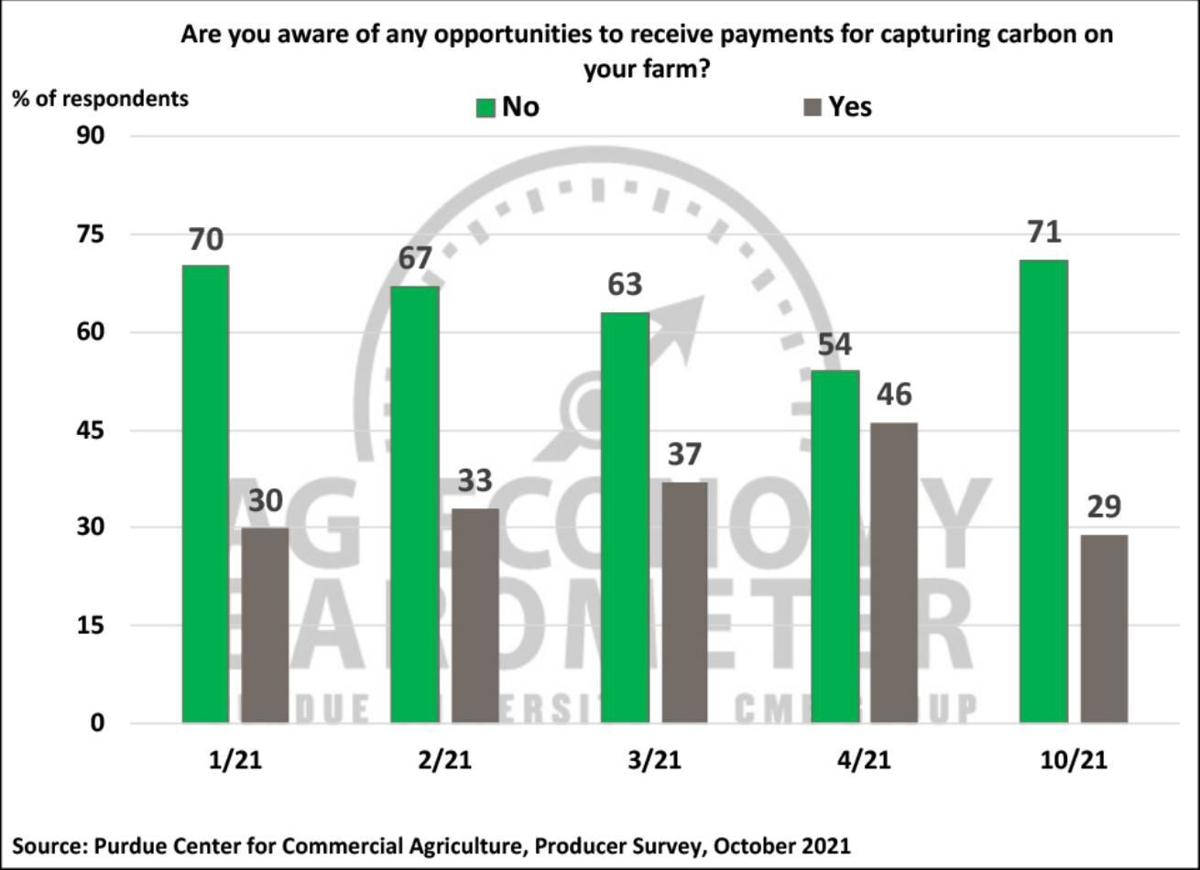 Famer sentiment remained weak in October as the Ag Economy Barometer decreased to a reading of 121, decreasing the index by almost one-third since its springtime peak. Increasing input costs, along with commodity prices that are less than earlier this year, are major reasons behind the decline in farmer sentiment. The Farm Capital Investment Index remains weak, in large part because of supply-chain problems as four out of 10 respondents said tight machinery inventories were holding back their purchasing plans.

Despite the weak overall sentiment expressed by producers they remain optimistic about farmland values, both in the upcoming year and during the next five years. Approximately three out of 10 producers in our survey said they are aware of potential opportunities to receive payments on their farms for capturing carbon, suggesting that little if any change in opportunities has taken place since early 2021. Among the small number of producers who have discussed a carbon-capture contract with a company, the most common payment rate offered was less than $10 per metric ton of carbon followed by rates of $10 to less than $20 per metric ton.

According to the National Retail Federation, 44 percent of Americans are carving pumpkins as part of Halloween festivities this year. Have you…

OPINION  President Joe Biden has signed the Infrastructure Investment and Jobs Act (H.R. 3684) into law. The $1.2 trillion package not only re…