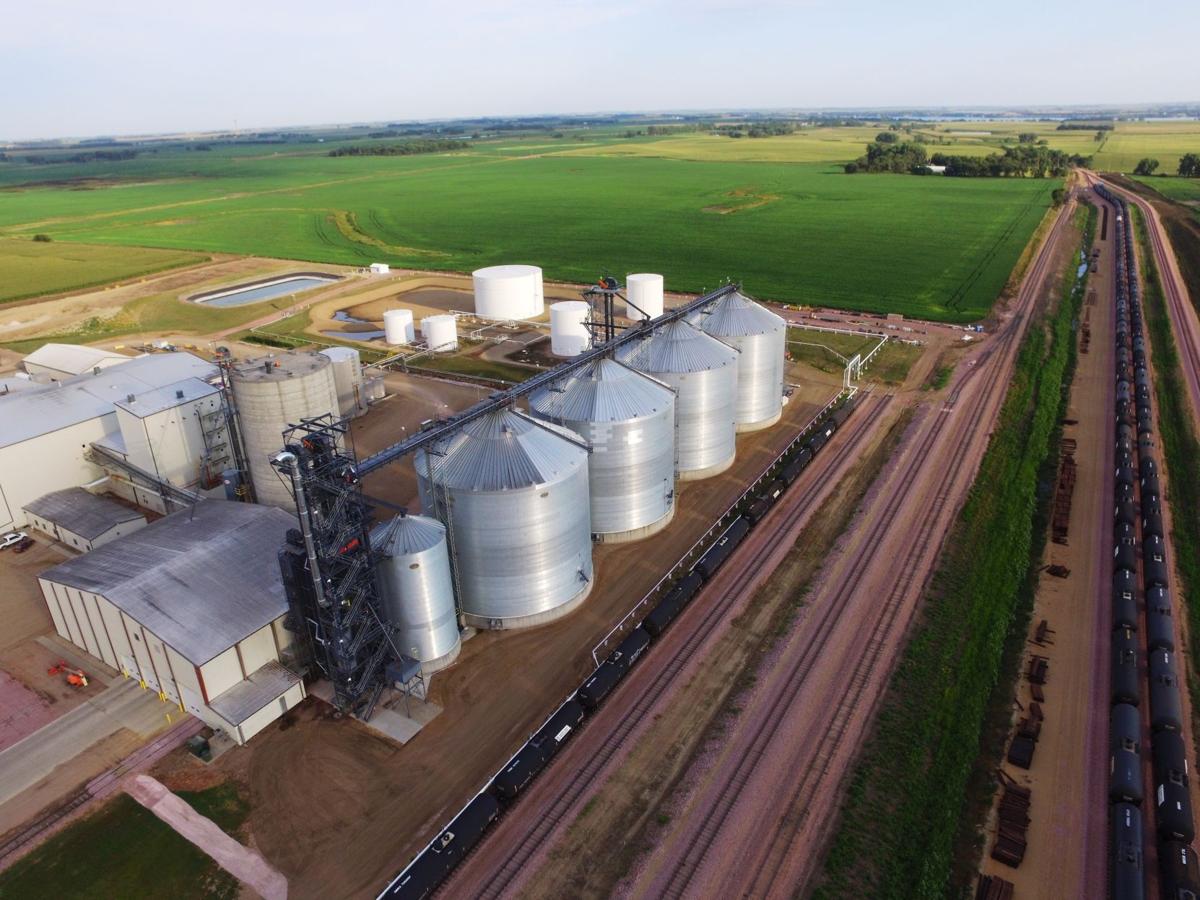 COVID-19 continues to affect ethanol production, use and prices. Future economic recovery will continue to the industry.

COVID-19 continues to affect ethanol production, use and prices. Future economic recovery will continue to the industry.

The social-distancing and government-imposed restrictions associated with COVID-19 resulted in a dramatic reduction in the consumption of motor gasoline and ethanol in spring 2020. The least occurred in April, when ethanol production and consumption decreased more than 40 percent compared to the same month during the past few years. Since then volumes have gradually rebounded as the economy has reopened, but they haven’t returned to historical levels. Now that initial recovery is underway it’s possible to assess with greater accuracy the impact the pandemic has had on the ethanol industry to date and to consider continuing effects. 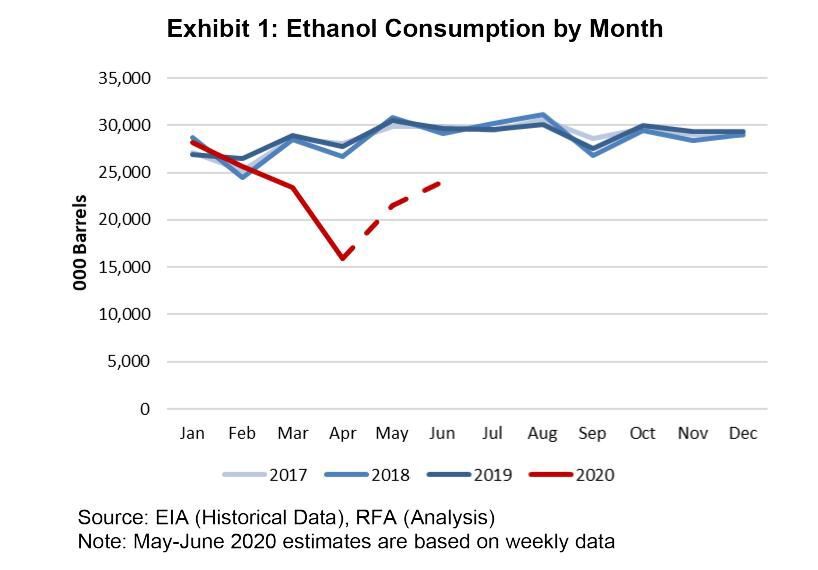 Impact reflects reduction in use

From March through June 2020, the cumulative decline in ethanol production and consumption exceeded 1.3 billion gallons. That was calculated by comparing monthly ethanol volumes to the average volume in the same month during the 2017-2019 period, a time when volumes were fairly consistent because growth had slowed as a result of small-refinery exemptions from the Renewable Fuel Standard as well as international trade tensions. Ethanol is most commonly used in a 10 percent blend in gasoline but it’s worth noting the decline in ethanol consumption was equivalent to more than 10 percent of the decline in gasoline product supplied – a measure of implied demand. Almost 500 million fewer bushels of corn were used in ethanol production during the period.

The reduction in demand also sharply affected the market prices of ethanol and co-products of ethanol production. The impact on prices was calculated by comparing the monthly price of each commodity to the average price during the preceding four months November 2019-February 2020. April was the month when the maximum impact occurred, as ethanol prices decreased by about 40 percent. That’s counter to typical seasonal trends because ethanol prices usually strengthen during the April-June period. The price of distillers grains increased as a result of the cutback in supplies. But livestock-feeding activity – demand – was not curtailed to nearly the same extent as distillers-grains production. The price of distillers corn oil also increased, though not to the same extent. 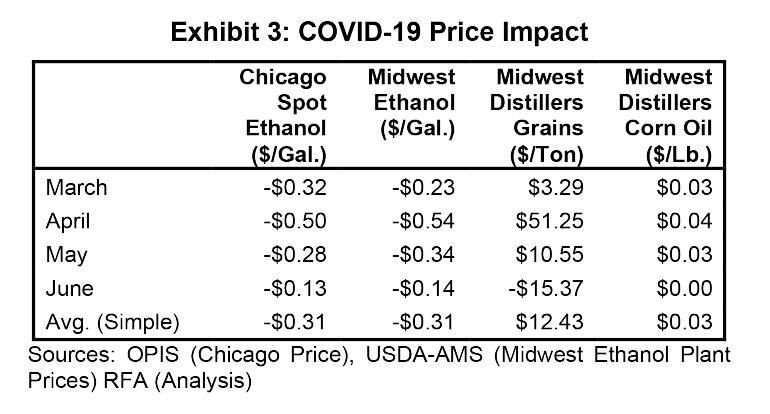 For the March-June period ethanol-industry revenues were reduced by more than $3.4 billion as a result of the impacts of the pandemic on the volumes and prices of ethanol and coproducts. The decline in ethanol sales alone was almost $3 billion, as the increased prices of coproducts partially offset the decline in sales volume.

Gasoline and ethanol consumption are still significantly less than pre-pandemic levels. It’s likely that will persist for a number of months as a result of COVID-related precautions and reduced economic activity. There were about 15 million fewer jobs in June than in February, which will weigh on the economy in general and transportation fuel consumption in particular. In its July “Short-Term Energy Outlook” the Energy Information Administration forecast that gasoline and ethanol consumption will not return to their corresponding 2019 levels until at least the end of 2021.

Given the estimates in Exhibit 2, that implies about two-thirds of the volume impact from the pandemic has already occurred, although the Energy Information Administration acknowledged the Short-Term Energy Outlook “remains subject to heightened levels of uncertainty because mitigation and reopening efforts related to (COVID-19) continue to evolve.”

The 2020 impact implied by the Food and Agricultural Policy Research Institute is only moderately more than the reduction that’s estimated to have already occurred. If Energy Information Administration current projections for 2020 and 2021 ethanol production are used along with the Food and Agricultural Policy Research Institute’s ethanol-price projections, the ethanol-revenue-loss estimates grow to almost $5.8 billion in 2020 and almost $1.5 billion in 2021. Notably those figures don’t include additional expected losses in co-product sales revenues. Those, based on co-product revenue losses to date, could amount to almost $1 billion in further losses in 2020 and more than $250 million in 2021.

Moreover those estimates assume current ethanol production and consumption levels are maintained or slightly increased through the end of the year. If states order additional business and travel restrictions to slow the transmission of COVID-19, ethanol production and consumption will decrease by a greater magnitude than contemplated in that analysis – meaning revenue losses could be greater than estimated.

The COVID-19 pandemic has had a dramatically negative economic impact on the ethanol industry. To date industry revenues have been reduced by more than $3.4 billion. The negative effects are expected to continue through the remainder of 2020 and into 2021, even if the pandemic doesn’t intensify and government restrictions such as those seen this spring are not re-imposed. Based on projections from the Energy Information Administration, and the Food and Agricultural Policy Research Institute, and assuming current market conditions don’t deteriorate, pandemic-related revenue losses could be almost $7 billion in 2020 and $1.8 billion in 2021. If additional travel and business restrictions are adopted by states, the losses will be larger. They could approach or surpass the $10 billion estimate from our initial prospective analysis released in April.

Moreover the impacts on ethanol-industry output and revenues are having ripple effects throughout the broader U.S. economy. The agriculture sector in particular and rural America more broadly are being adversely affected by the significant downturn in ethanol and coproduct output.