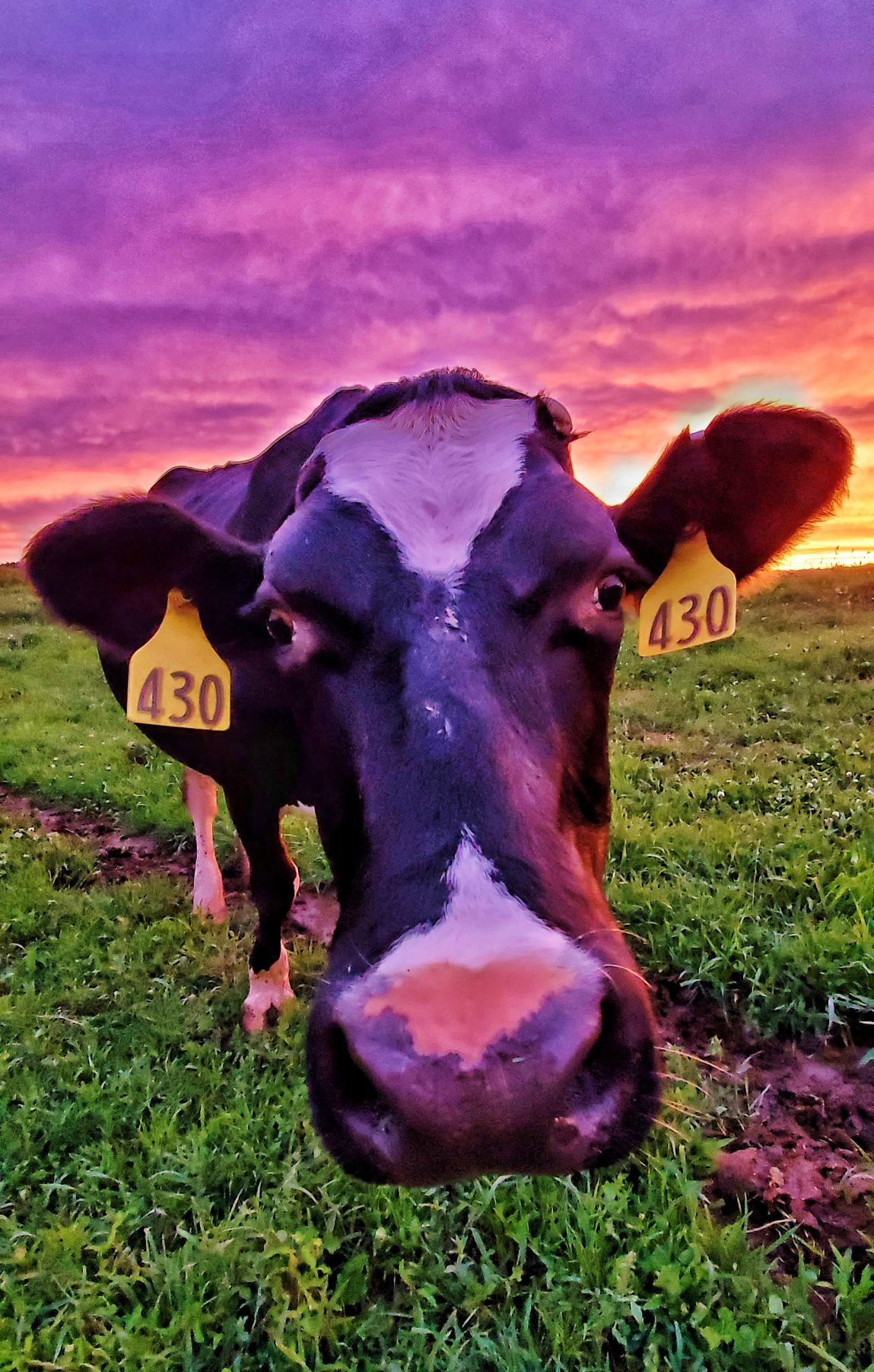 April U.S. milk production increases from a year ago by 1.4 percent, compared with 2.8 percent in March and 1.8 percent in February, adjusted for leap year.

April U.S. milk production increases from a year ago by 1.4 percent, compared with 2.8 percent in March and 1.8 percent in February, adjusted for leap year.

The worst of the coronavirus-induced plunge in the dairy economy may be finished. The sharp decrease in dairy-product prices in April – prompted by the pandemic – has been followed by a strong recovery in cash-market prices in May that’s continuing into June. Cash cheese prices rebounded dramatically from $1 per pound in the first half of April to record levels in less than eight weeks. Cash butter prices, to a lesser extent, have also rebounded from April depressed prices.

The market turnaround has been caused by actions and developments that have reduced milk supply and strengthened dairy-product demand. Dairy cooperatives widely implemented temporary base-excess price plans. Dairy farmers changed their feeding and milking practices and culled some additional cows.

Government purchases of dairy products expanded substantially as Congress provided billions of dollars in emergency relief to the U.S. Department of Agriculture. More recently food-service establishments resumed significant dairy purchases to replenish empty stocks in anticipation of staged reopenings. And retail sales of key dairy products have been at more than year-earlier levels throughout the pandemic episode, as consumers largely went back to the basics of grocery shopping and home cooking.

Dairy-farmer income will also be boosted by federal direct payments of $6.20 per hundredweight for first-quarter milk production. Those developments together have improved the financial outlook for the nation’s dairy farmers markedly from how it first appeared during March’s collapse driven by the COVID-19 pandemic.

Significant effects of the coronavirus pandemic on domestic consumption of dairy products became visible in USDA data for April. Domestic commercial use of American-type and other varieties of cheese both decreased by about 10.5 percent that month from April 2019; butter use was about 3.5 percent more. That reflected the different proportions of those two basic dairy products in food-service versus retail purchases. Domestic use of milk in all products was 5 percent less on a milkfat and 6.2 percent less on a skim-solids milk-equivalent basis in April, compared with a year earlier.

The United States exported about .5 percent more of its production of total milk solids during February–April than it did during the same period a year earlier. The increase was due to gains in overseas sales of milk powders, dry-whey products and other dairy ingredients, which outweighed declines in cheese, milkfat and other food-product exports.

During the February–April period imports of milk-protein concentrate and casein increased substantially from year-ago levels in March, but were less than the previous year’s level in April. Imports of whole-milk powder were at well more than the previous year’s levels in both March and April. Imports of the major cheese categories were at well less than a year ago in those two months. 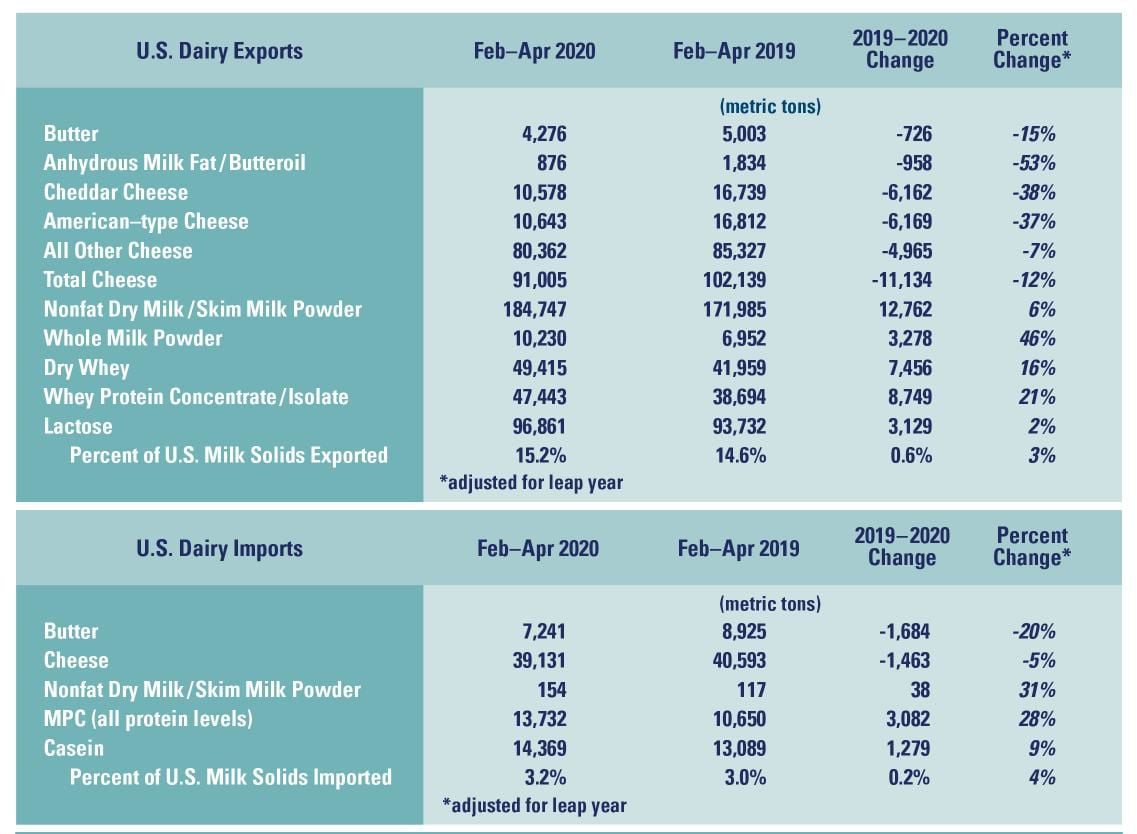 The crisis conditions in the U.S. dairy industry during the past few months have significantly affected milk production. Revised data show U.S. cow numbers in March were 52,000 head more than in March 2019. With that number this past March witnessed by far the most aggressive in more than 20 years of dairy-herd expansion during the third month of a herd-expansion cycle. But preliminary numbers for April were 49,000 more than April 2019, making this past April the first time since early 2005 that the fourth month of a dairy-herd-expansion cycle showed a smaller annual increase than the third month. Milk production itself increased in April at a slower year-over-year rate, or decreased at a faster rate, compared to March in every one of the 24 monthly-reporting states except for two with slightly faster April increases. April U.S. milk production increased from a year ago by 1.4 percent, compared with 2.8 percent in March and 1.8 percent in February, adjusted for leap year.

U.S. average daily milk production per cow decreased from March to April for the first time since at least 1998; that’s significant. The pandemic’s impacts caused U.S. dairy farmers to take actions that universally halted, at least temporarily, one of the most energetic dairy-herd and milk-production expansions in at least two decades. That’s one of several key factors currently strengthening the milk-price outlook for the second half of this year. 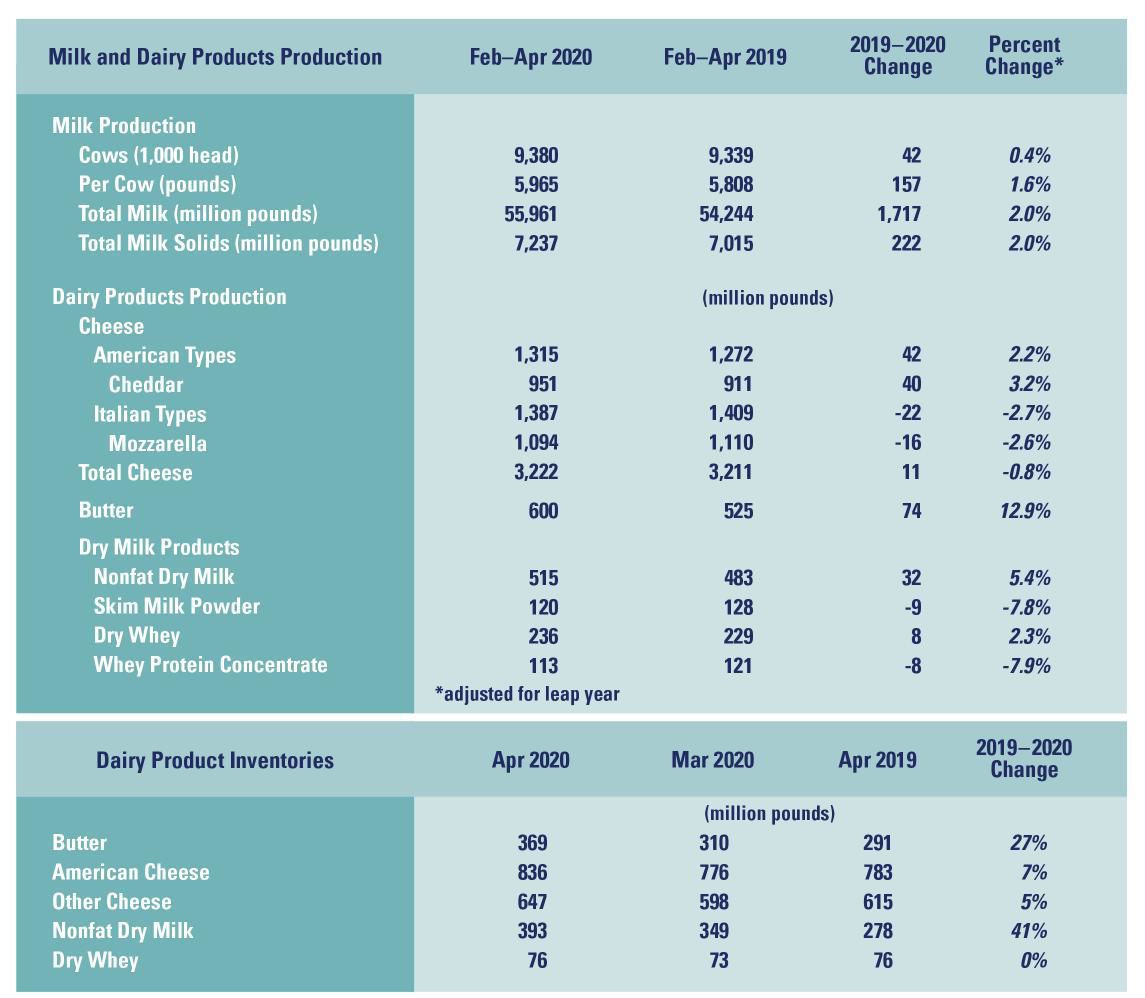 Cheddar-cheese production in April was almost 8 percent greater than in April 2019. But Mozzarella production decreased by about 5.5 percent at the same time. Those major changes affected the three-month February–April results as well. Butter sales at retail increased by almost 33 percent as compared to a year ago during the first five months of 2020. Reflecting this, reported butter production increased compared to a year ago by 5.4 percent in February, 8.4 percent in March and by 25.1 percent in April. April numbers are preliminary. Nonfat-dry-milk production was 9.3 percent greater than a year earlier, likely stimulated by increased demand for milk fortification in cheese production.

Stocks of many of the key dairy products reached extremely large or record levels at the end of April. That was not unexpected given the pandemic-related disruptions the dairy industry experienced beginning in March. April-ending cold-storage stocks of butter were the most since fall 1993.

American-type-cheese stocks were last at more than April-ending levels in the fall of 1985. April stocks were the greatest on record for other than American-type cheese and for nonfat-dry milk.

The price of butter reported by USDA’s Agricultural Marketing Service in the National Dairy Product Sales Report increased in May from its April depressed price, but the National Dairy Product Sales Report cheese and nonfat-dry-milk prices continued to decrease. Those price changes reduced all Federal Order Class prices in May from their April levels, presaging a May all-milk price even less than April’s already sharply depressed level. Retail prices increased from April to May for natural Cheddar cheese, processed cheese and yogurt. But they decreased slightly for fluid-milk products and ice cream. Those increases reflected stronger retail sales for those products. But butter, which has experienced particularly strong retail-sales gains in recent months, showed a continued retail price decrease from both a month ago and a year ago in May, both driven by the steady decline in wholesale butter prices that started in fall 2019.

The U.S. average all-milk price strongly reflected the effects of the COVID-19 pandemic on the U.S. dairy industry in April, decreasing $3.60 per hundredweight or 20 percent from the March price. That was the largest one-month decrease in the national all-milk price since at least 1980, in both absolute as well as percentage terms. The largest previous one-month price plunge in dollar value was $2.90 per hundredweight in January 2015. The biggest percentage decrease was 17 percent in April 1999. 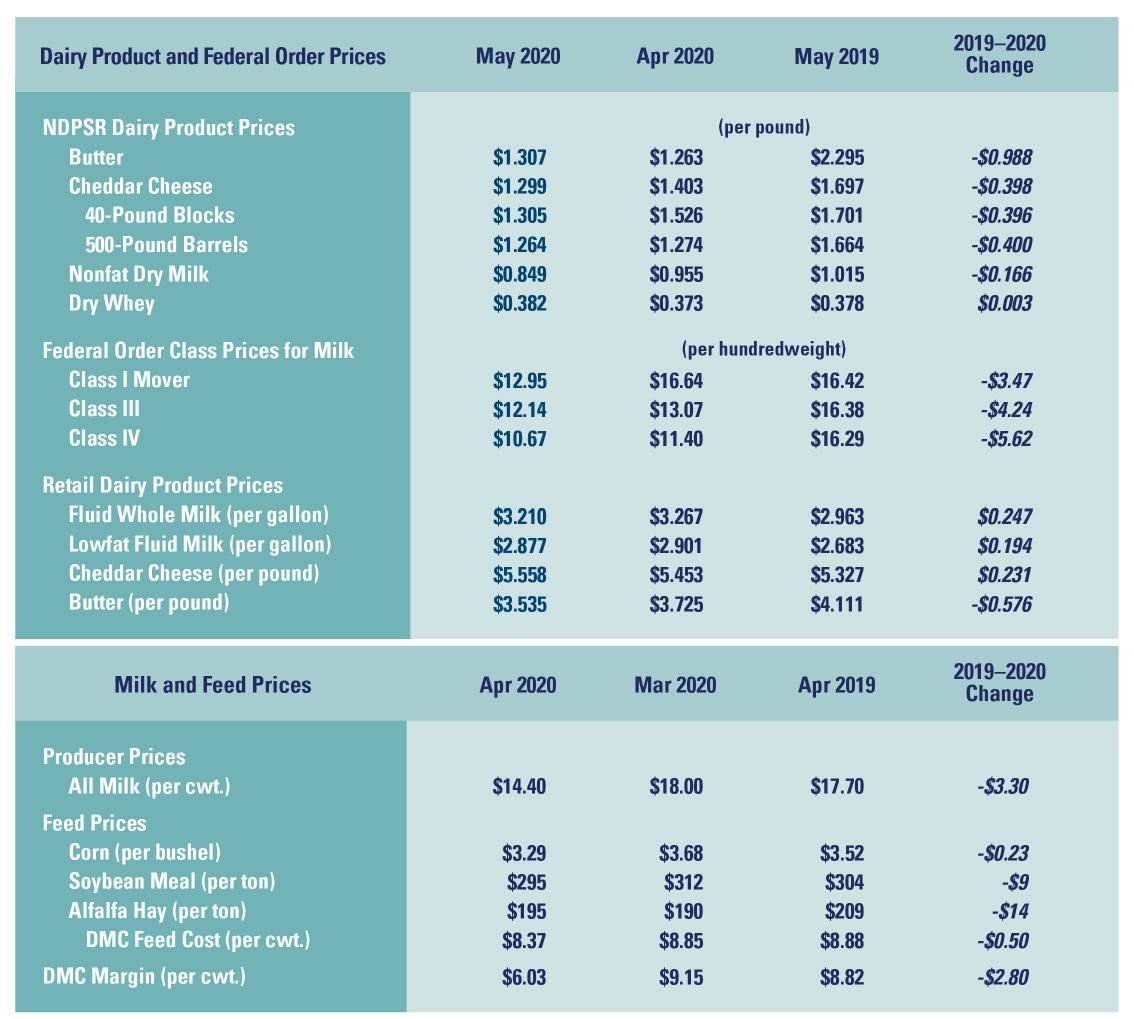 April and May will be the two worst months of 2020 for dairy farmers for both prices and margins. But beyond those two months the dairy-futures-based outlook has improved significantly since the end of April. At that time the outlook was for a very slow and painful recovery for margins throughout the remainder of 2020 – with June being as bad as May and Dairy Margin Coverage margins remaining at less than $9.50 per hundredweight through the end of the year.

And if the total estimated Coronavirus Food Assistance Program direct-payment amounts are thought of as supplements to milk prices during the two months of expected very depressed prices and margins, April and May, together with average Dairy Margin Coverage payments, those augmented prices would also average about the same $18.60 per hundredweight for those two months.

Dairy Management Inc. along with state, regional and international organizations work together to drive demand for dairy products on behalf of America’s dairy farmers through the programs of the American Dairy Association, the National Dairy Council and the U.S. Dairy Export Council. Visit www.usdairy.com for more information.

The National Milk Producers Federation is a farm-commodity organization representing most of the dairy-marketing cooperatives serving the United States. Visit www.nmpf.org for more information.