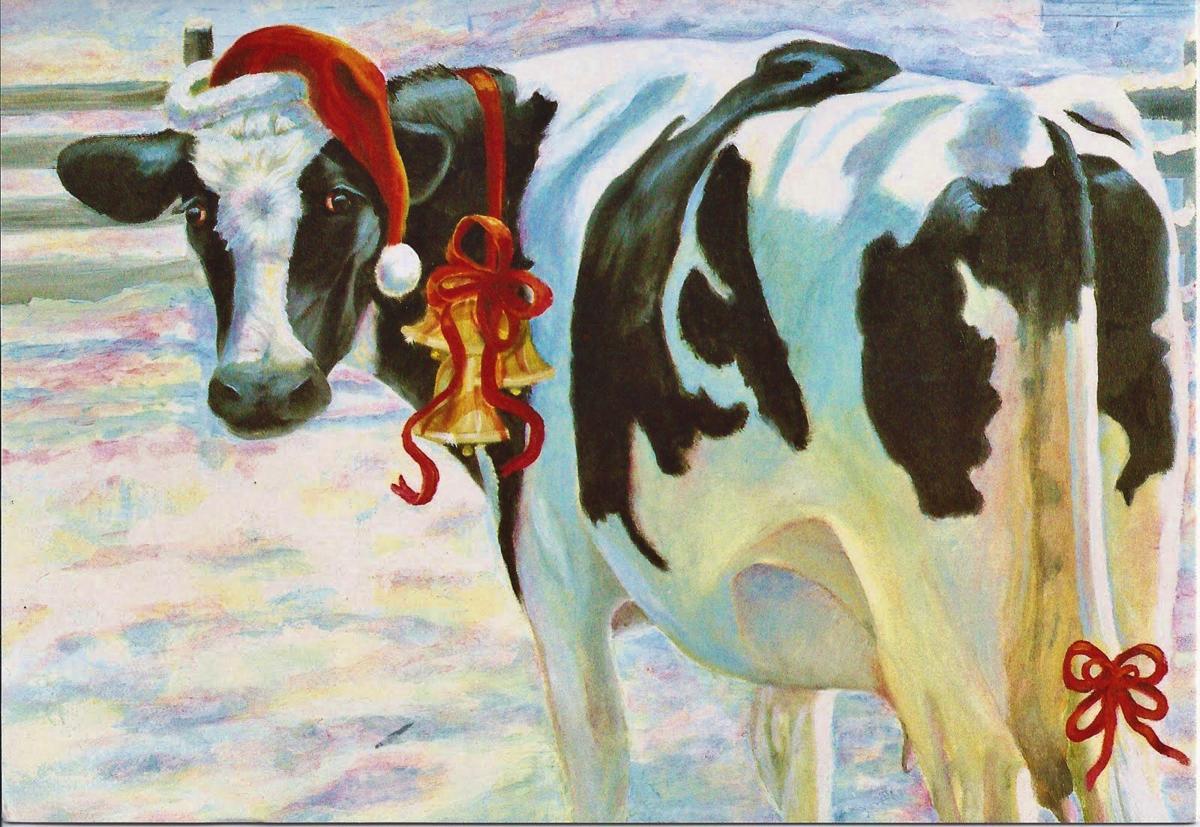 Milk abounds. U.S. milk output was more than 18 billion pounds in November, an increase of 3 percent from a year ago. That’s the strongest year-over-year increase since December 2014. Merry Christmas from all the dairy cows!

Milk abounds. U.S. milk output was more than 18 billion pounds in November, an increase of 3 percent from a year ago. That’s the strongest year-over-year increase since December 2014. Output climbed nearly everywhere, and especially in the Midwest and Southern Plains where the weather has been ideal. Milk production per cow increased 2.3 percent from November 2019, the strongest increase in six years. Investments in facilities, breeding technologies, and other methods to improve milk production and cow care are clearly having an impact. Component data are not yet available for November but both butterfat and milk-solids levels have been increasing since this summer, which suggests the already-impressive 3 percent growth understates the volume of milkfat and milk solids available for processors. 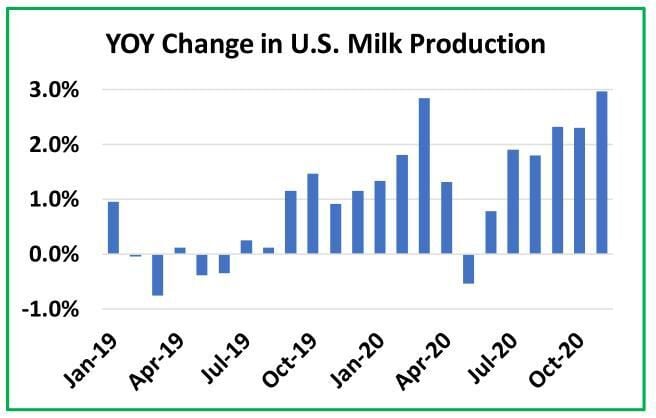 Dairy producers continue to add cows. The U.S. Department of Agriculture revised upward its estimate of the October milk-cow herd by 5,000 head – and reported a further 12,000-head increase from October to November. At 9.407 million milk cows, the dairy herd is larger than it has been in any month since June 2018. There are 62,000 more cows in U.S. milk parlors than there were a year ago. 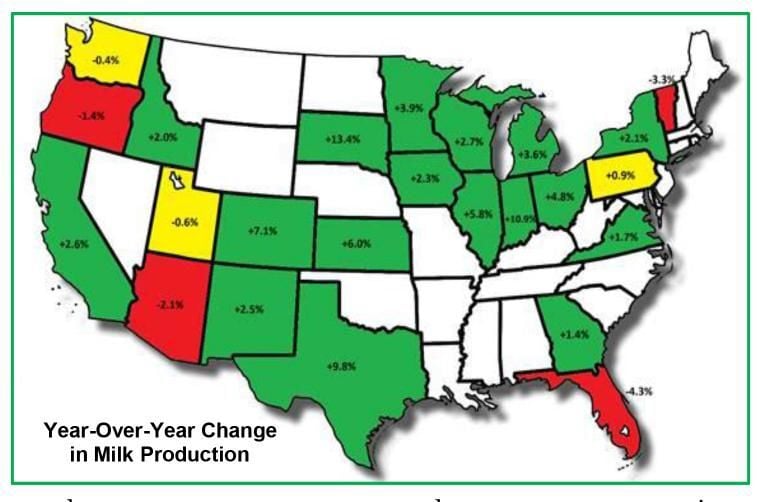 Dairy producers culled 65,924 cows in the week ending Dec. 5. At first glance that’s a big slaughter number. But it’s not historically large for the week after Thanksgiving, and is slightly short of dairy-cow slaughter in the same week in 2019. For the year to date, dairy slaughter is 5.4 percent less than the previous year’s pace. There is no sign that cull rates are increasing or that dairy producers have any plans to shrink the herd. But given all the milk we’re making currently, they may be forced to increase cull rates this spring. In many regions supply-management programs may be necessary once again to keep milk volumes in line with processing capacity throughout the flush. 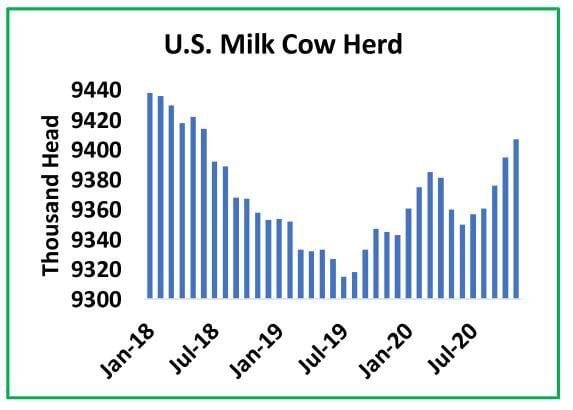 Theoretically the milk surplus should weigh most heavily on Class IV values as excess milk heads to driers and surplus cream keeps churns running. But the Class IV markets have already priced in some rather-dreary fundamentals. Class IV futures were little changed this past week. The February contract was weakest; it decreased 17 cents to $14.14 per hundredweight.

Chicago Mercantile Exchange spot butter decreased 2.5 cents from the previous Friday. At $1.455 per pound, butter sits comfortably within the trading range that has prevailed since August. The price reflects heavy stocks and slow demand. Nonfat-dry milk followed the foreign skim-milk-powder markets to increased prices. Skim-milk powder rallied 1.2 percent at the Global Dairy Trade auction Dec. 15, to the equivalent of nonfat-dry milk at $1.42 per pound, its best value since January. U.S. milk powder remains the least expensive in the world, and the weak dollar is making American dairy products even more affordable for overseas buyers. The USDA’s “Dairy Market News” characterizes export demand as “stable.” CME spot nonfat-dry milk finished this past Friday at $1.15 per pound, an increase of 2.25 cents from the previous Friday and within a penny of the pandemic-era best price. 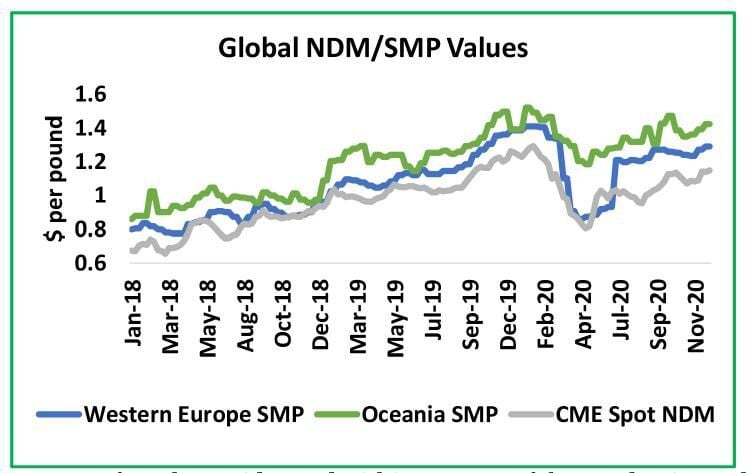 CME spot whey powder decreased 1.25 cents to 45.5 cents. Whey values are much more than those that prevailed for most of 2019 and all of 2020, reflecting strong demand – particularly from China.

Despite lackluster holiday orders and plentiful stocks, the spot cheese markets held firm. CME spot Cheddar blocks rallied early in the past week, likely spurred on by chatter about the possibility of more government purchases. But that optimism faded and prices did too. Blocks finished this past week right where they started, at $1.6175. Barrels climbed 3.25 cents to $1.475, a surprising increase amid reports of ample supplies.

The forward-looking futures market shrugged off the spot-market strength to instead have decreased prices. Most Class III contracts posted double-digit losses. January decreased 66 cents to $15.56. February dropped 83 cents to $16.44. Given strong U.S. milk output, steady increases in milk production around the world and a multitude of concerns about demand, further declines are possible. Bah! Humbug. 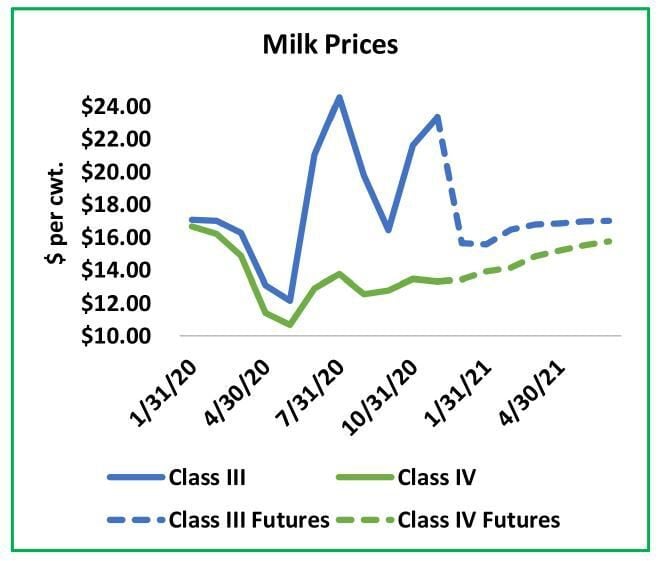 The feed markets increased to new best prices this past Friday. March corn closed at $4.375 per bushel, an increase of 14 cents from the previous Friday. Soybeans soared to their best values in more than six years. The January contract settled at $12.20, an increase of almost 60 cents this past week. January soybeans have rallied an astounding $3.50 since August, an increase of 40 percent. January soybean meal increased more than $25 to $405.50 per ton. Investors are flush with cash as central banks around the world try to pump funds into their respective economies. Easy money and a weak dollar are helping to prop up commodity values. Strength begets strength as multi-year best prices prompt headlines and alerts, ensuring the soy complex is on the radar for traders looking for the next winning play.

Crops are moving from grain bins in the Midwest to Mississippi barges to cargo ships at a strong clip, tightening domestic supplies. The weather in South America has been far from perfect but the forecast looks much better for northern Brazil. Those fundamentals are supportive of feed prices more than those that prevailed this past summer, but they are not an unqualified endorsement of the bullish euphoria that swept this past week across La Salle Street in Chicago. A setback is possible but it’s impossible to predict the timing or magnitude of a retreat. As seasoned traders warn, “Don’t fight the trend.”

OPINION  The near absence of a debate concerning U.S. international-trade policy in the recently concluded presidential election campaign was …

Milk abounds. U.S. milk output was more than 18 billion pounds in November, an increase of 3 percent from a year ago. That’s the strongest year-over-year increase since December 2014. Merry Christmas from all the dairy cows!