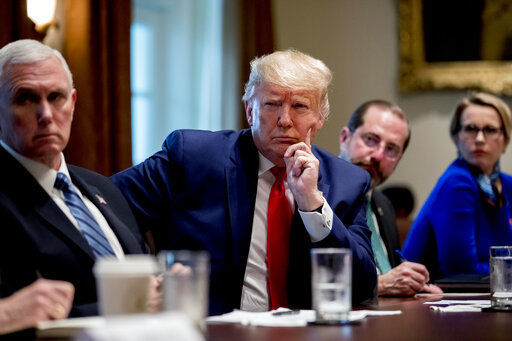 From left, Vice President Mike Pence, President Donald Trump, and Health and Human Services Secretary Alex Azar meet with GlaxoSmithKline CEO Emma Walmsley, right, and other pharmaceutical executives in the Cabinet Room of the White House. The Fed has slashed rates in response to COVED-19.

From left, Vice President Mike Pence, President Donald Trump, and Health and Human Services Secretary Alex Azar meet with GlaxoSmithKline CEO Emma Walmsley, right, and other pharmaceutical executives in the Cabinet Room of the White House. The Fed has slashed rates in response to COVED-19.

The bulls nearly drowned in a flood of red ink this past week. The markets were swamped in wave after wave of selling due to fears COVID-19 would continue to spread. Fear was that consumers would hunker down, throttling economic activity around the world. The stock market suffered its worst week since the financial crisis and commodity values were battered. The dairy bulls finally came up for air this past Friday, even as the broader market continued to sink.

Some recovery Feb. 28 brought much-needed calm to the dairy complex. But though the rebound was reassuring, it was still much smaller than the initial retreat. Most Class III futures contracts settled 30 cents to 60 cents less than the previous Friday. Class IV losses were even steeper. During the past month February through December Class III futures have decreased by 92 cents per hundredweight on average, while Class IV futures plummeted $1.70. While Class III contracts sit comfortably at more than $16, March through July Class IV are still trading in the $15s.

Prices decreased decidedly at the Chicago Mercantile Exchange spot market. Spot butter decreased all the way to $1.695 per pound, the worst price since March 2015. But Feb. 28 it came back in convincing fashion. Traders exchanged 39 loads. Spot butter closed at $1.725, much better than the Thursday worst price but still a decrease of 6 cents for the week.

The milk-powder market continued to fade. Spot nonfat-dry milk decreased 10.5 cents to a five-month worst price of $1.065. Spot whey powder decreased 3 cents to 34 cents. Spot Cheddar blocks decreased 4.5 cents to $1.7225. Barrels decreased so far in January that even a global market panic couldn’t shake them. They held steady at $1.59.

Outside market factors were the main culprit for this past week’s selloff. But the markets had some dairy-specific data to digest as well, and it provided little fodder for the bulls. The U.S. Department of Agriculture’s Cold Storage report showed Jan. 31 butter inventories at 242.7 million pounds. That’s 14.9 percent greater than the previous year and the largest January reserve since 1994. Butter makers usually accumulate product in January and this year was no exception. Cream is cheap so stocks have likely continued to swell. The good news is that the abundance of butter has already been factored into pricing. U.S. butterfat is now the cheapest in the world, which is likely to shift the trade balance in favor of new export demand and smaller imports.

There were 1.35 billion pounds of cheese in cold-storage warehouses at the end of this past month. Although cheese stocks were 1.2 percent less than the prior year, they were still the second-largest Jan. 31 total on record. The December-to-January increase was the largest in 20 years. American cheese stocks grow about 3 million pounds from December to January in a typical year, but this year they surged 29.1 million pounds. Cheap spot milk and a sharp decline in Mozzarella output have likely boosted Cheddar production and fresh cheese stocks at the expense of spot Cheddar values. But as evidenced by the steady trade in barrels this past week, cheese prices may have decreased far enough for now.

The milk-powder market is the most dependent on exports and the most vulnerable to contagion from the coronavirus. Buyers can smell the fear and are waiting patiently, purchasing largely on a hand-to-mouth basis. Milk-powder prices are slipping around the world. But global inventories are well-balanced. European skim-milk-powder output in 2019 was 0.3 percent smaller than the prior year. Manufacturers on both sides of the Atlantic have trimmed their stockpiles noticeably. And milk output in Oceania has sputtered, likely reducing skim-milk-powder output there.

In the near term market direction could depend on whether or not the world is able to contain the coronavirus without significantly disrupting economies and destroying consumer demand for goods of all sorts. Assuming the disease is contained, it’s pretty easy to be bullish from way down here. But the market is not ready to assume anything at this point.

Dairy producers simply can’t make $15 milk work, especially given their tenuous relationship with their creditors. Spring discounts make these prices even less palatable. The USDA’s Dairy Market News notes that spot milk is trading at $1 to $5 under Class III in the Midwest. And in the mountain states, “there are reports of milk being shipped out of the region at prices slightly above freight costs” or to feeder-calf lots for “as low as $4 per hundredweight plus freight.” The flush is not yet in full swing, but discounts like those are already watering down pay prices. If the markets don’t recover further, sellouts will likely accelerate. The dairy herd will once again contract. That’s a recipe for much greater prices down the road, but it’s still a tough pill to swallow today.

Soybean futures lost a little ground this past week, but soybean meal held firm. May meal closed at $305.60 per ton, an increase of more than $10 from the previous Friday. Argentina’s Ministry of Agriculture suspended registrations for agricultural exports until further notice. Most traders expect that means the government is preparing to increase Argentina’s soybean export tax from its current 30 percent. That favors U.S. soybean exports, which had floundered amidst the trade war and the strong dollar. Soybean meal received a further boost from news that a major crusher in Argentina filed for bankruptcy, leading to speculation that even more of the company’s crushing facilities might be idled. If so there will be more room for U.S. soybean-meal exports.

Grain prices decreased in tandem with the outside markets. Corn values came under added pressure as estimates of the South American corn crop continue to increase. May corn settled at $3.6825 per bushel, a decrease of 12.5 cents from the previous Friday.