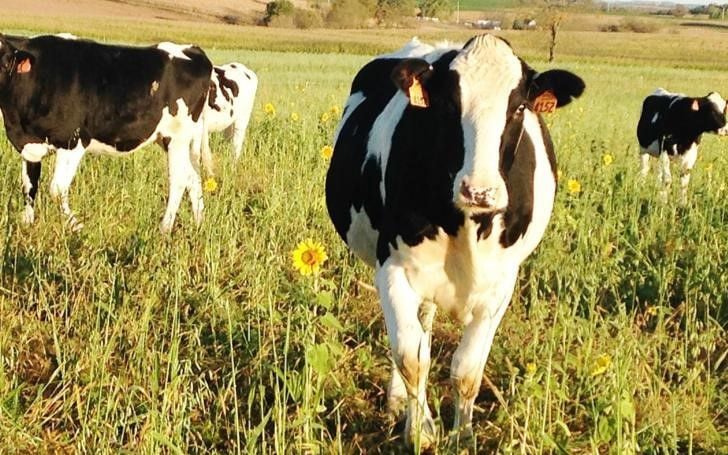 The U.S. dairy herd is increasing, according to the USDA.

The U.S. dairy herd is increasing, according to the USDA.

Milk is simply flying off the shelves. Sales at retail have dwarfed the partial loss of the school milk program. The U.S. Department of Agriculture’s “Dairy Market News” reports that “Class I demand is a bit up” in California, “strong” in the mountain states, “surging” in the Pacific Northwest, “extraordinary” in the Northeast and “haywire” in the Southeast. That means less milk for churns, vats and driers despite the mounting spring flush. In parts of the Southeast, the Dairy Market News relates that milk bottlers are working nonstop to be ahead of demand, but “retail demand is overtaking milk inventories.”

Increased fluid-milk consumption is particularly welcome in the West, where milk supplies were overwhelming processing capacity. In the mountain states milk is now “in better balance with consumer demand.” Processors still cannot handle all the milk within the region, but they are moving fewer loads to far-flung processors at a discount. Punitive base programs are further helping to reduce the excess by slowing growth in milk output in the West.

Strong fluid-milk consumption will benefit the whole industry by reducing dairy-product output at a time when overall demand is likely taking a sizeable hit. More directly increased Class I sales will benefit dairy producers through increased premiums and by shifting a greater share of their milk check away from painfully depressed Class IV values.

It’s difficult to predict if milk sales will continue at that formidable pace. Consumers who stocked up to hunker down will likely not be buying at the same volume going forward. But milk is an indispensable source of nutrition for people of all ages and especially for children. Now that consumers are not looking for on-the-go options, they’re likely to swap granola bars for a bowl of cereal and milk, or take the time to prepare scrambled eggs, pancakes, French toast or waffles. All of those often include a healthy helping of dairy. Sales will likely decrease from the recent surge. But even after consumers have fully stocked their pantry, fridge and freezer, they are expected to buy milk in greater quantities than they did before the pandemic until they are back to their normal routines.

Fluid-milk sales are a ray of sunshine on a somewhat gloomy horizon. Cheese and butter demand seem to be holding so far; strong gains at retail are helping with steep losses at schools and restaurants. But grocery sales of those storable products are likely to fade once everyone’s refrigerators are full and consumers begin to shop on a more as-needed basis. Class II products like yogurt and perhaps ice cream could become more popular.

Sales in the export-dependent milk-powder market have come to a halt. Mexican buyers are on the sidelines. Driers have slowed nonfat-dry-milk output, but product is still accumulating. Eventually Mexican milk-powder merchants will need to refill their warehouses, but it’s difficult to predict when that will be amidst a global pandemic and rapidly closing borders. While U.S. nonfat-dry milk appears to be on sale, it’s quite a bit more expensive when priced in foreign currencies. The Mexican peso dropped to an all-time worst against the dollar this past week. Mexico’s purchasing power has decreased more than 24 percent since mid-February. 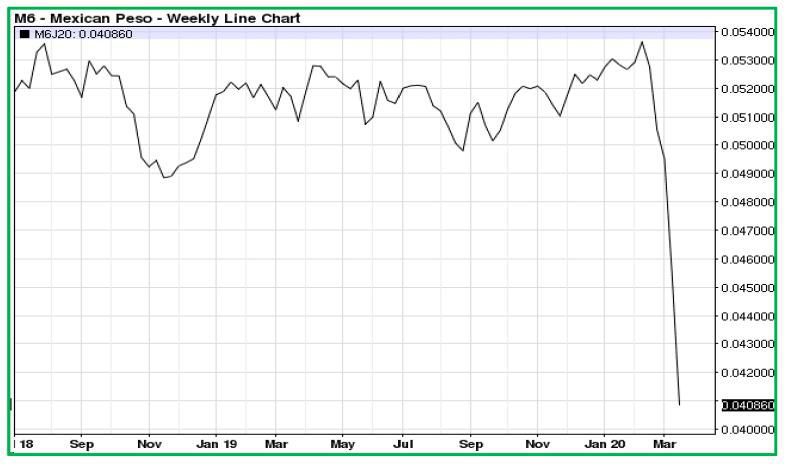 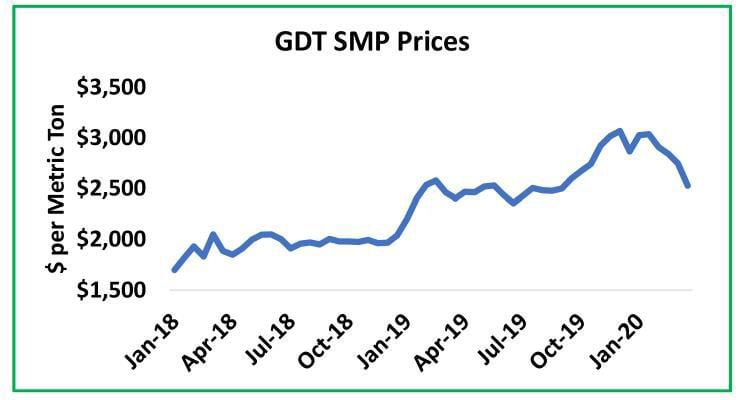 The Chicago Mercantile Exchange spot dairy products took some big steps back early in the week. Butter decreased March 18 to a five-year-worst price. Spot nonfat-dry-milk powder hit a one-year worst price March 19 at 96.25 cents per pound. But most markets started to bounce back late in the past week. At the closing bell spot nonfat-dry-milk powder was 98.75 cents, still a decrease of 6.5 cents from the previous Friday. At $1.755 butter was 5.75 cents in the red, but had increased 8.5 cents from the mid-week price. Cheddar blocks decreased 3.5 cents to $1.8375 and barrels decreased 7 cents to $1.43. Spot whey powder decreased 1.75 cents to close at 33 cents. 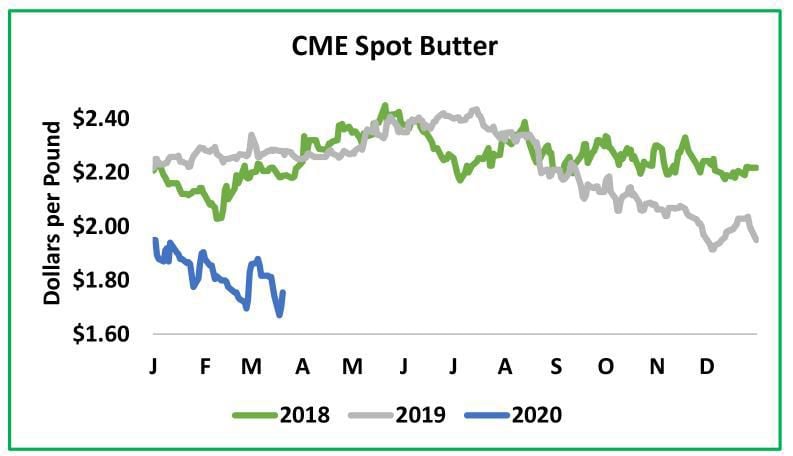 Despite strong performances March 19 and 20, the milk markets finished much less than the previous week. April Class III managed to gain 15 cents and increased to more than $16 per hundredweight. But most Class III contracts settled to 40 to 50 cents less than the previous Friday. Class IV futures suffered another rout. Most contracts lost about 70 cents this past week. April and May Class IV are barely holding at more than $14. Those checks will not pay the bills, and U.S. milk output is likely to suffer if prices don’t recover soon.

U.S. milk production increased to 17.9 billion pounds in February, an increase of 1.7 percent from the prior year after adjusting for Leap Day. Excellent weather boosted milk yields throughout the nation, except in Wisconsin where reduced-quality feed remains a drag. Dairy producers were much more optimistic this past month than they are currently; the dairy herd continued to grow. The USDA increased its estimate of the January milk-cow herd sharply. According to the new figures dairy producers added 18,000 cows in January and a further 9,000 cows in February. Such a steep increase seems improbable given record slaughter in January. At 9.37 million head the dairy herd is 18,000 more than it was a year ago and larger than it has been for the past 18 months. If those figures are correct, there may be plenty of milk around for a while. 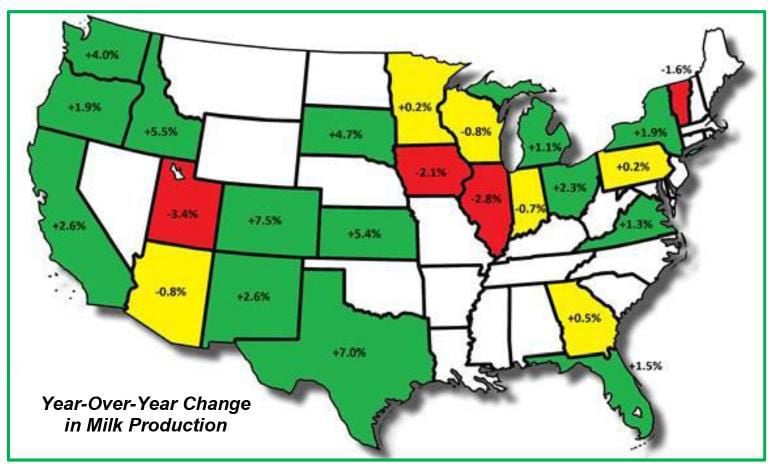 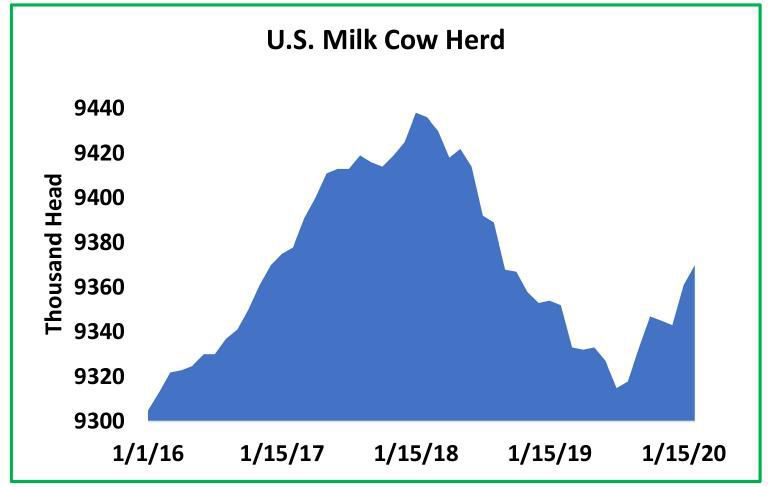 Oil is cheap and many consumers aren’t driving anywhere at all. Ethanol demand has plummeted, and ethanol futures stand at all-time worst prices. It’s likely that a lot less corn will be routed to gas tanks, leaving more for other uses. Corn is likely to remain cheap, even as the price of dried distillers grains increases. This past week corn futures touched multi-year-worst prices. May corn settled at $3.4375 per bushel, more than 20 cents less than the previous Friday.

The soy complex increased. May soybeans closed at $8.625, an increase of 17.75 cents from the previous Friday. May soybean meal increased $25.70 to $325.20 per ton. Soybean values have decreased far enough to attract some Chinese purchases, and those may accelerate in the near term as China tries to stay ahead of snarls in international trade. An Argentine mayor recently closed the nation’s key grain port. It’s unclear if the port will remain closed given a national outcry, but fears of such closures are surely rippling through the global supply chain.