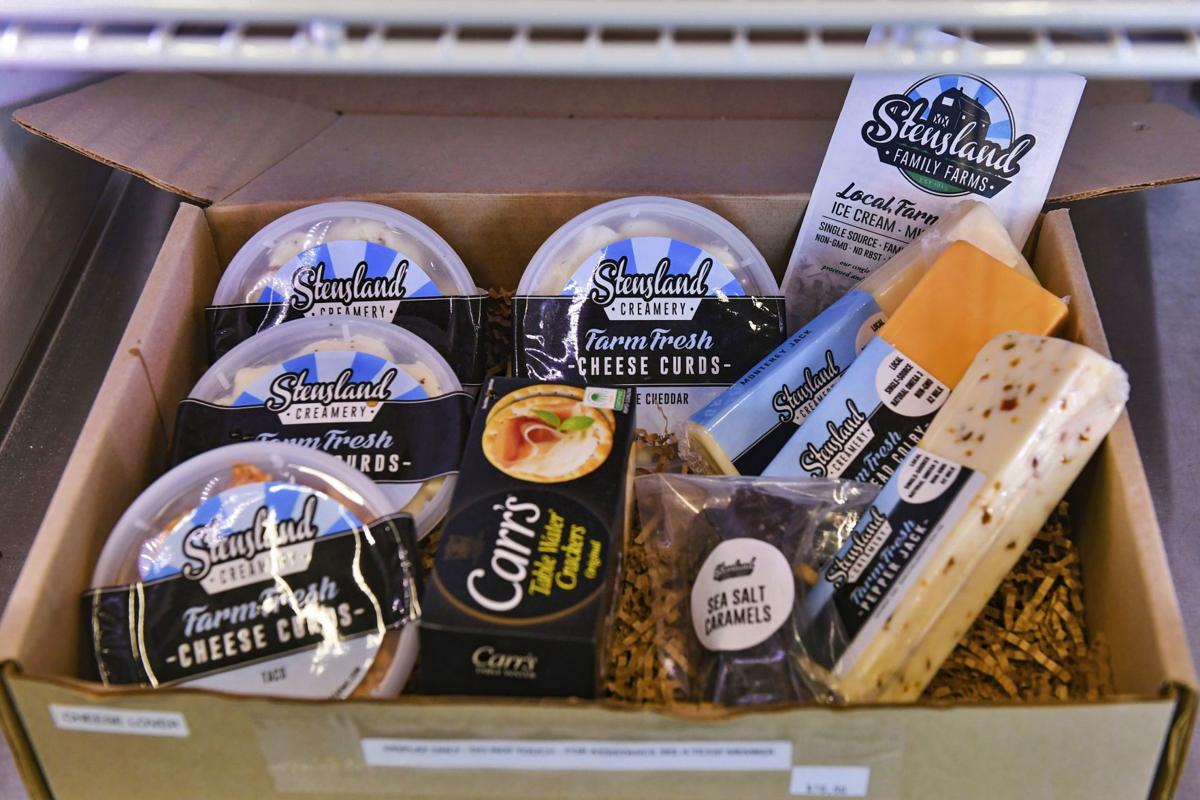 Dairy markets are awash in red after stumbling this past week.

Dairy markets are awash in red after stumbling this past week.

The dairy markets had a strong start Feb. 18 after a better-than-feared performance at the Global Dairy Trade auction. Despite anxiety surrounding the coronavirus and a heavy volume of product on offer, both skim-milk-powder and whole-milk-powder values decreased only 2.6 percent. Butterfat prices decreased sharply, but Cheddar rallied a convincing 5.3 percent. At the Chicago Mercantile Exchange, traders responded with enthusiasm. They increased bids on dairy-product futures of all varieties across the board.

But it didn’t last. The markets were awash in red ink Feb. 19, and the selloff gathered speed as the week drew to a close. March through August Class III futures lost at least 30 cents this past week. Most contracts settled at their worst values since the cheese market began to rally this past fall. By the closing bell Class IV futures floundered at life-of-contract worst prices. The futures promise a difficult spring for dairy producers. March and April Class IV stand at an unbearable $15.74 per hundredweight. In the same months Class III futures slumped to $16.64 and $16.56, respectively. The second half looks much better, with a Class III average of $17.39 and Class IV at about $17.07. 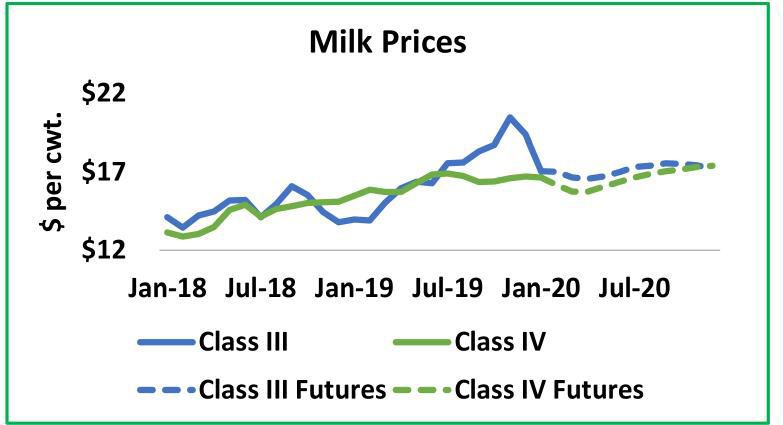 The cheese markets continue to narrow. Unfortunately Cheddar blocks worked hardest to close the gap this past week. They decreased 4.25 cents to $1.7675, a new worst price for the year. Barrels climbed a half-cent to $1.59. CME spot whey was eerily quiet this past week. It held steady at 37 cents; no product changed hands.

CME spot butter decreased 4 cents this past week to $1.755 per pound, matching the worst value in the spot market since April 2015. Spot butter is likely to feel a lot less pressure once March arrives and traders are no longer allowed to sell “old crop” butter produced before Dec. 1, 2019. Brokers are likely rushing to dump older butter in Chicago while they still can. Once those sales end, the butter market is likely to regain at least some of the ground it lost recently. But cream is plentiful and cheap, and there is an abundance of fresh butter to be had. 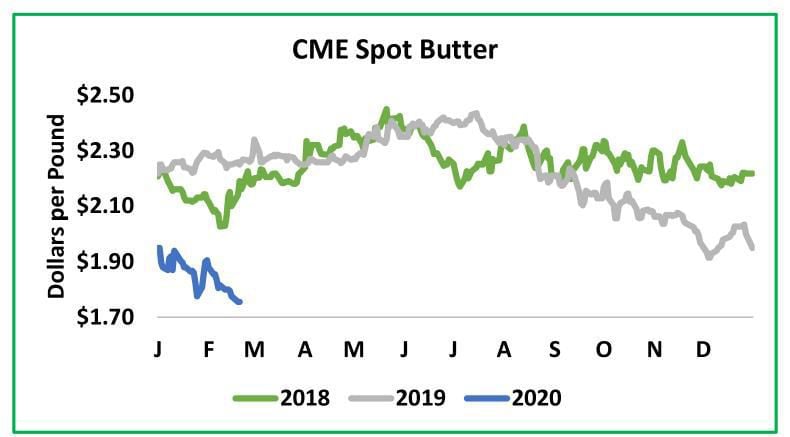 Milk-powder values remain respectably good but they too lost ground this past week, decreasing 3 cents to $1.17. Global milk-powder inventories are considerably less than they were in recent years, but trade has slowed. With China largely on the sidelines, buyers can smell a bargain and they are waiting for the market to come to them.

Meanwhile the weather is mild and milk is sloshing around the country. Waning fluid-milk sales and surprisingly robust milk production in the Southeast are keeping more milk close to home in the Northeast, Midwest and Southwest. Fluid-milk sales in November – the latest data available – decreased 9.4 percent from the prior year, the worst year-over-year decline for any month on record. Meanwhile the spring flush is off to an early start and there are long lineups at the drier. Even in the Upper Midwest, where it’s too early for the flush to begin in earnest, milk yields are increasing. Spot loads are commanding steep discounts, ranging from $2 to $6 less than class.

U.S. milk production totaled 18.8 billion pounds in January, an increase of 0.9 percent from the prior year. Mild weather and a young herd helped to boost milk production per cow, although feed issues continue to decrease milk yields in Wisconsin. 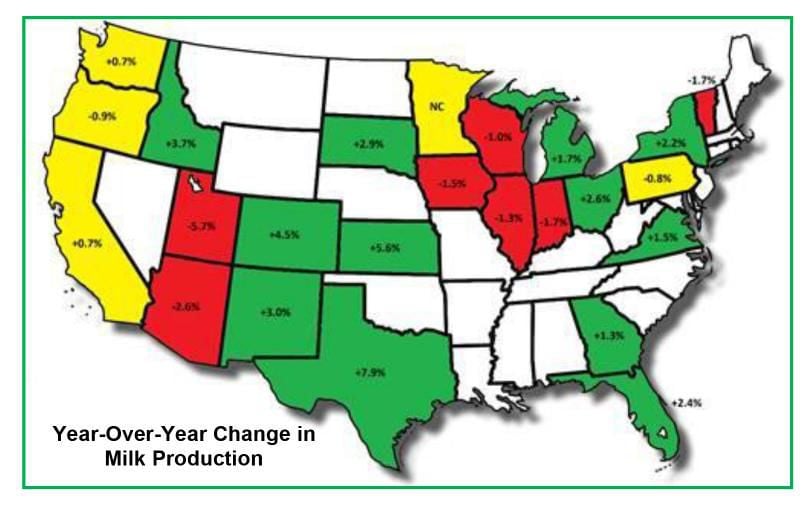 Dairy producers are adding cows. After a more-extensive quarterly survey, the U.S. Department of Agriculture increased its estimate of the milk-cow herd in October, November and December. It reported the January herd at 9.348 million head, an increase of another 5,000 from the revised December figure. After all that financial pain and loss there are just 6,000 fewer cows in U.S. milk parlors than there were the year before. Fourth-quarter milk prices gave dairy producers a welcome respite from the woes of the past four years, and that likely encouraged the recent wave of expansion. But current prices are sending a different signal. The industry lost 3,281 dairy herds in 2019, the most in any year since 2004. If prices don’t recover soon the sellouts will likely continue. 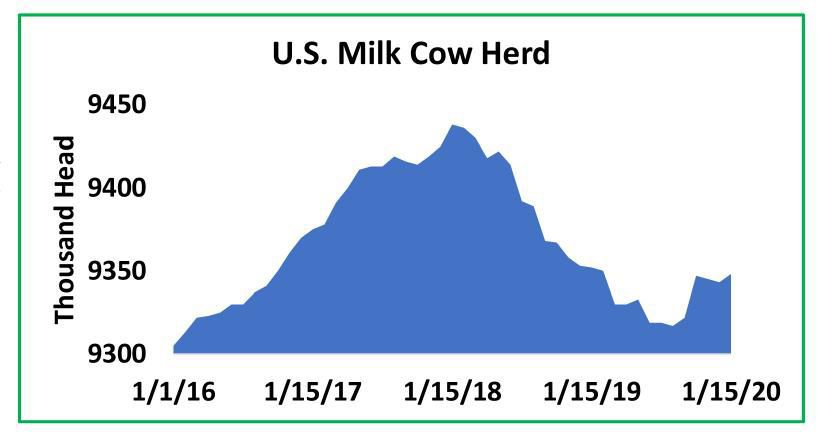 The feed markets lost a little ground this past week. March corn settled at $3.77 per bushel, a decrease of a fraction of a cent from the previous Friday. March soybeans decreased 3.25 cents to $8.905. Weather in Argentina and Brazil continues to favor crops in most areas. The strong dollar and feeble South American currencies are boosting demand for Southern Hemisphere crops at the expense of U.S. exports.

At the annual Outlook Forum, the USDA projected farmers would sow 94 million acres of corn this spring, an increase from 89.7 million in 2019. Assuming normal weather and trendline yields, there will be a bumper corn crop this year. That will cause big stocks and inexpensive grain in the fall. The USDA expects soybean plantings to total 85 million acres, which would be much more than this past year’s 76.1 million acres – but much less than seedings in 2017 and 2018. The USDA is counting on large exports to trim soybean stocks, but the market will need to see exports improve noticeably before prices improve. 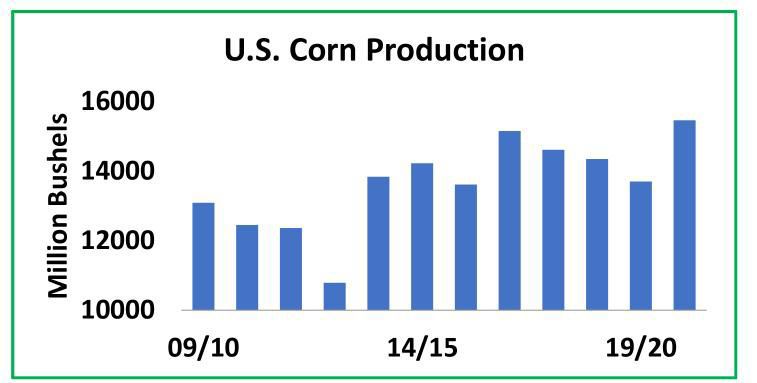