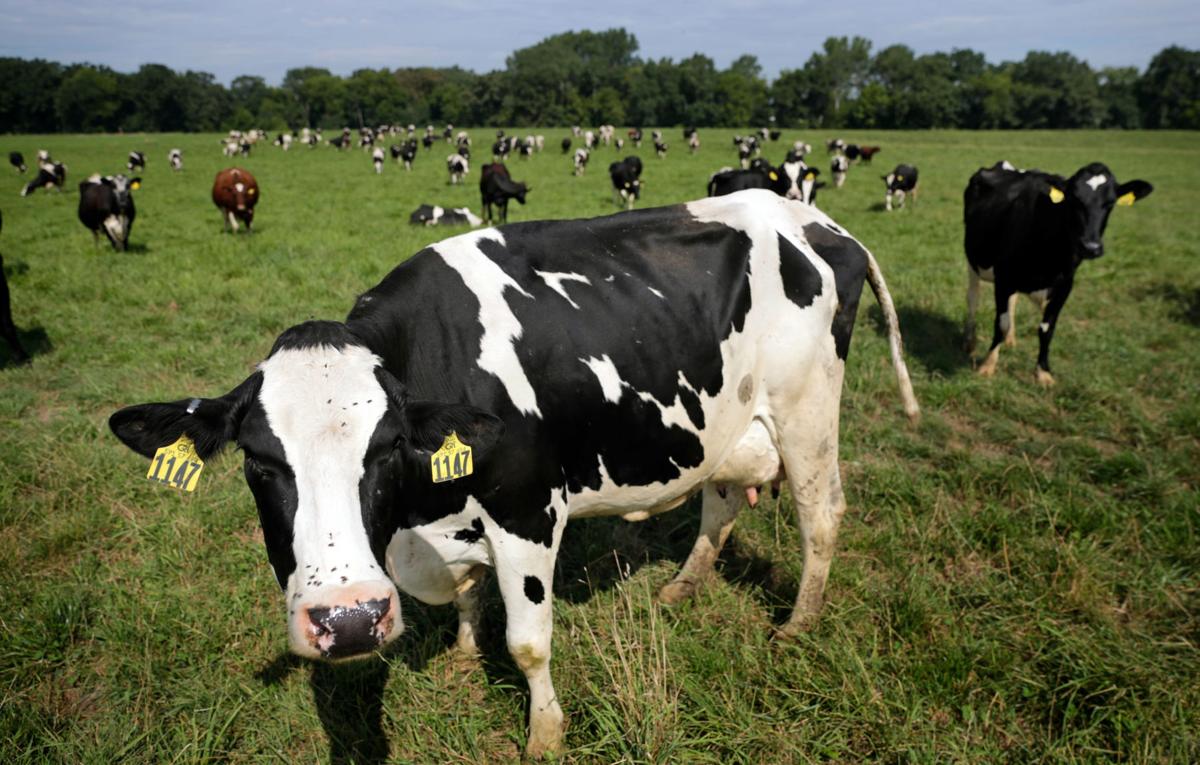 There is only one thing we can count on in the dairy markets these days – volatility. Class III futures were increased sharply to start this past week, with limit-up settlements Aug. 25 in most 2020 Class III and cheese contracts. Steep losses at mid-week but with a rebound Aug. 28 led to net gains across the board. September Class III settled at $15.69 per hundredweight, much less than the euphoric values promised in June and July. But it was an increase of 56 cents from the previous Friday. October Class III fared best, adding $1.31 this past week to reach $17.64. That’s its best weekly close since July. Most deferred contracts closed 20 cents to 30 cents better than the previous Friday. Nearby Class IV futures remain in the doldrums. September Class IV lost 30 cents and slumped to $12.96. Deferred Class IV futures increased a little this past week, but they remain at well less than dairy-producer cost of production at about $14 or $15 per hundredweight.

Spot butter continues to melt. It closed this past Friday at $1.4475 per pound, 6.75 cents less than the previous Friday. Demand is uninspiring and stocks are heavy. There were 373 million pounds of butter in cold storage as of July 31. That’s 13 percent more than a year ago and the greatest July total since the early 1990s. Butter stocks typically tighten from June to July, but this year they grew by more than 10 million pounds – the largest July increase in four decades. 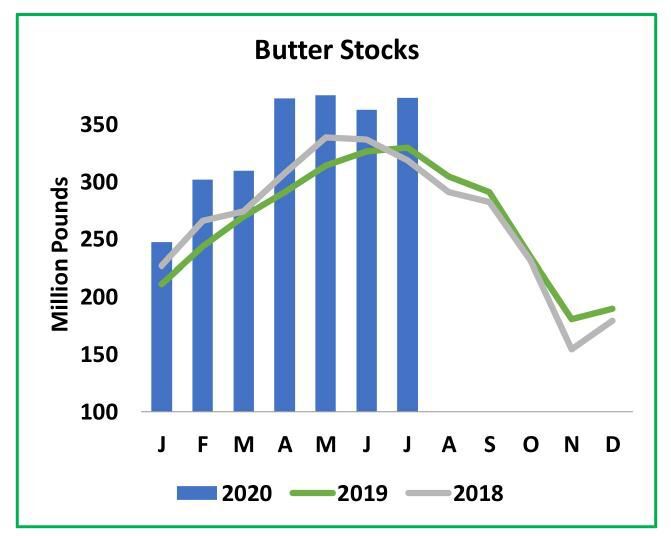 The cheese-market bulls have been struggling to recover from a taxing three-month run and a month of demoralizing collapse. But President Donald Trump gave the bulls a shot in the rump when he announced the U.S. Department of Agriculture would spend another $1 billion on the Farmers to Families Food Box program. While some look back at this summer’s meteoric rally with fondness, others look with dismay. Every dairy trader is acutely aware of the impact that government spending can have on the cheese market; a buying spree ensued. Cheddar blocks rallied an impressive 17.75 cents to $1.8275. Barrels added a dime to reach $1.43.

After an initial burst of speed the bulls have slowed their gait. Details on how the USDA will spend the latest $1 billion are lacking. It’s likely to resemble Round 2, which allocated a smaller share of federal funds to dairy than Round 1. And the environment is decidedly less friendly to cheese than it was a few months ago. With school-milk sales off to a slow start, spot milk is moving at a discount to cheesemakers in the Upper Midwest. There is likely not a huge lineup of cheese cargoes destined for export. Restaurants are not rushing to restock their shelves. Processors tell the USDA’s “Dairy Market News” that barrel supplies are growing and demand is light. On the other hand cheese is well south of $2, at values that may look attractive to end users who have not forgotten the speed at which blocks sprinted to $3 this summer.

Cheese is plentiful but stocks are waning. There were 1.39 billion pounds of cheese in cold storage at the end of July. That’s 2.4 percent greater than the prior year but more than 23 million pounds – or 1.6 percent – less than as of June 30. Cheese inventories typically grow in May, June and July, but this year they declined in each of those months as stocks moved out of processor hands and onto end-user books. Still it seems unlikely that cheese consumption was sharply more than normal this year, which suggests that there will be plenty of cheese to last through what may be a disappointing season for football and holiday entertaining. 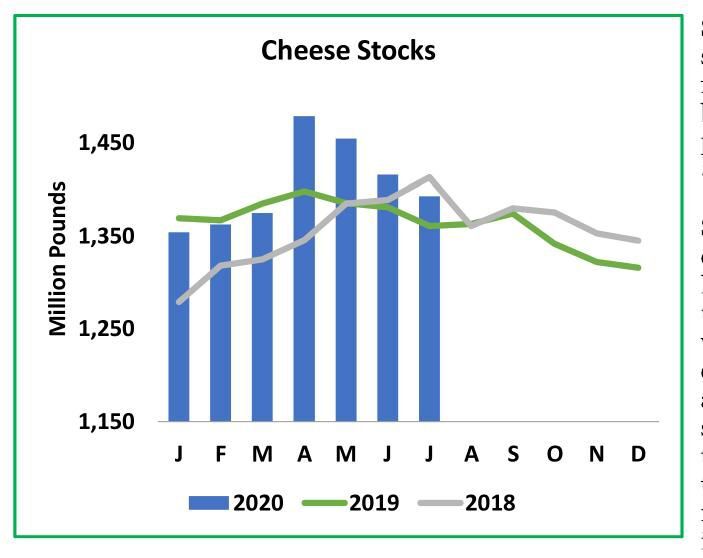 Chicago Mercantile Exchange spot dry whey gained a half-cent this past week to close at 34 cents. Other indications of domestic prices are steady at best. Domestic demand is steady and export prospects are good. The weaker dollar is helping to keep U.S. whey competitive abroad; China is looking to buy. The USDA’s livestock analyst in China expects a 56 percent increase in piglet feed consumption this year as China’s hog industry modernizes and recovers from African swine fever. Many of those large up-to-date facilities include whey in piglet rations, and they’re sourcing more from abroad. Chinese dry-whey imports reached a record 140 million pounds in July, an increase of 64 percent from a year ago. The U.S. sent more whey to China in July than in any month since the trade war began two years ago. 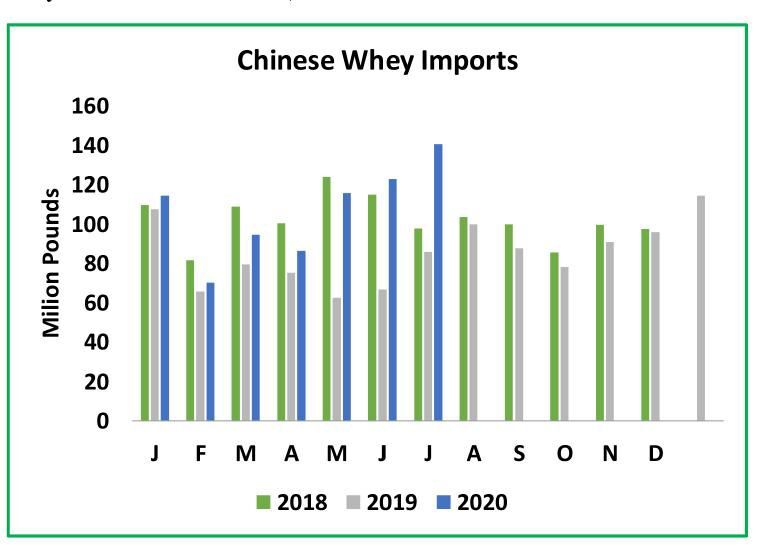 Global milk-powder prices are increasing and U.S. product is increasingly competitive. This past week CME spot nonfat-dry milk increased 2.25 cents to $1.02. That’s well less than the European and Oceanian benchmarks for skim-milk powder, which range from $1.20 to $1.40. China imported more skim-milk powder in July than during any other July on record. But China’s year-to-date skim-milk-powder imports are still 10.5 percent less than year-ago levels. The U.S. ranks well behind New Zealand and Australia in competition for China’s skim-milk-powder market, but it made a strong showing in both June and July. Chinese whole-milk-powder imports decreased 11.3 percent from year-ago volumes, dragging year-to-date imports slightly less than 2019 after adjusting for Leap Day. 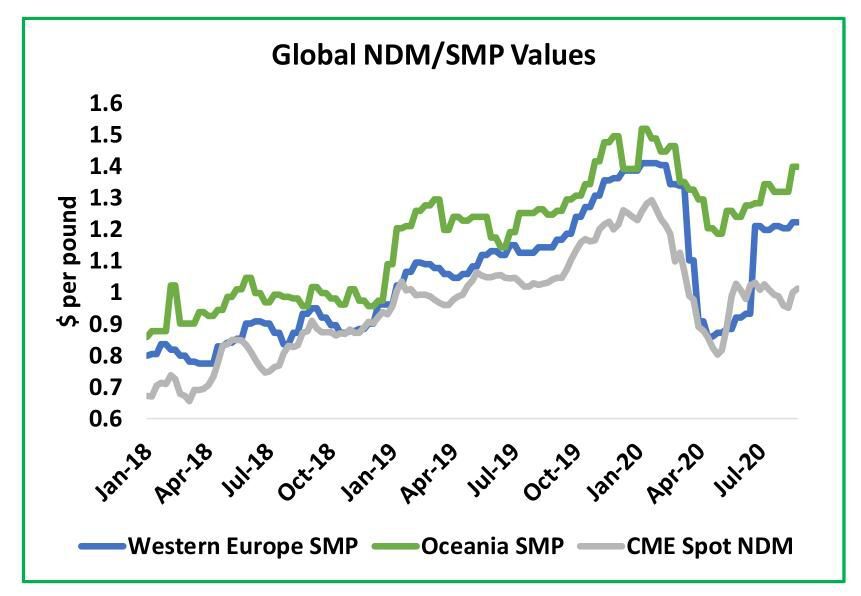 Heat continues to stifle milk yields in parts of the West but temperatures have faded from the extreme heat. Milder weather is on the way in the Midwest and milk output continues to recover from the summer reduction. Slaughter volumes are light and the dairy herd is likely growing. There will be plenty of milk this fall. 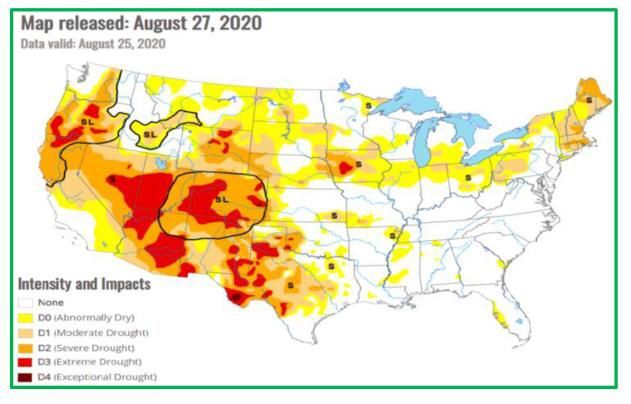 The grain markets took off this past week. December corn settled at $3.5925 per bushel, an increase of 18.75 cents from the previous Friday. November soybeans closed at $9.505, an increase of 45.75 cents to a seven-month best. Across the Corn Belt fields are drying out and yield potential is fading. The U.S. Drought Monitor shows almost the whole state of Iowa in drought, with severely dry conditions in the central and western portions of the nation’s most important corn state. There are rains in the forecast during the next two weeks, but farmers in the driest areas – Nebraska, Iowa and northern Illinois – will likely see much less rain than they’d like. On the whole the national corn and soybean crops will still be large but projections are moving less. Meanwhile China is rapidly buying U.S. crops. Given China’s growing feed needs and a wide margin between Chinese and U.S. prices, those sales are expected to continue apace.