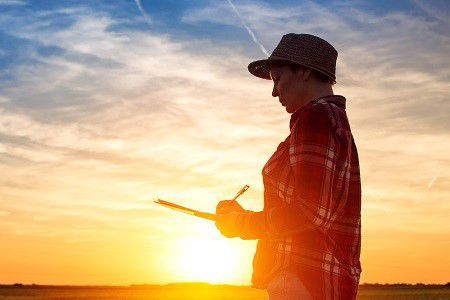 The interesting thing about current farm debt levels is that most of the growth has been in the form of real estate debt. At $264 billion dollars, real estate debt is well beyond any levels seen in history.

During the past few years we have documented a number of important trends in the financial condition of the U.S. farm sector. Those have included a decline in liquidity, rapidly growing amounts of real estate debt and deteriorating repayment capacity. While decreasing interest rates have helped to mitigate the impact of increased debt use, farm income has often been soft. This week we look at the relationship between farm income and debt levels. 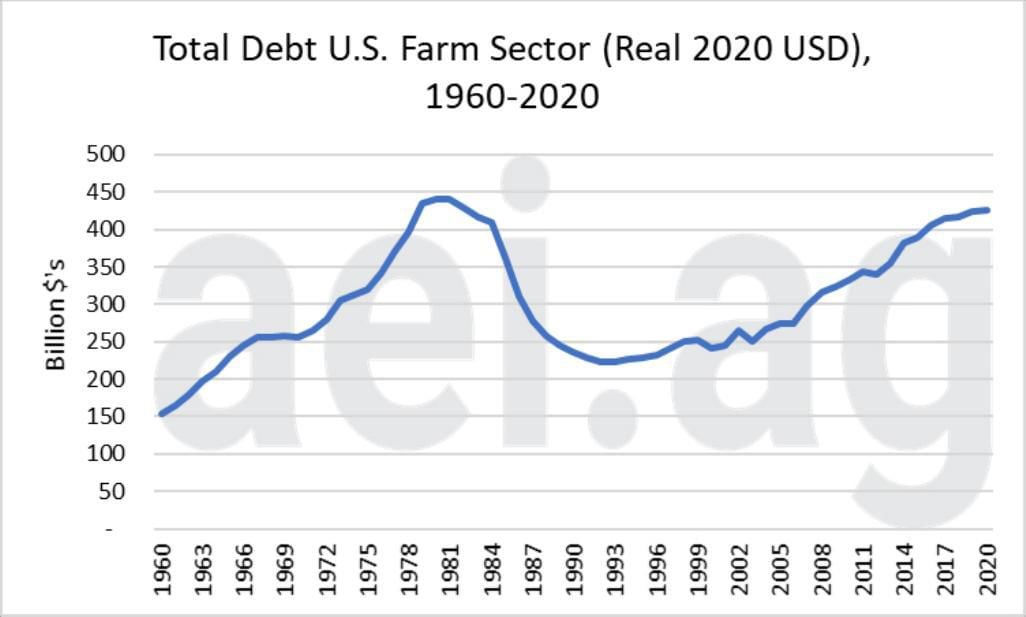 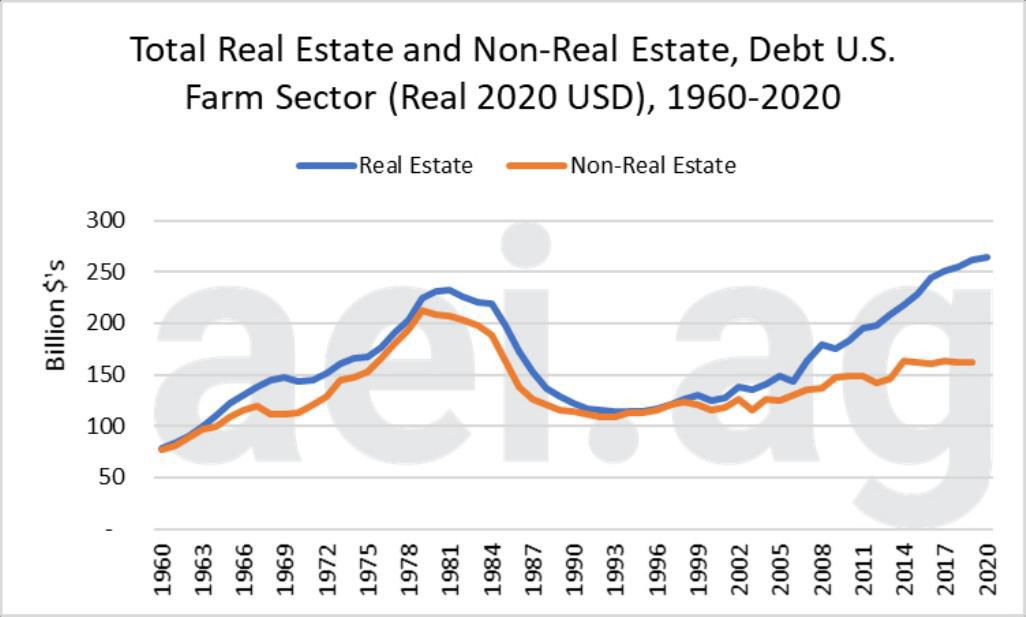 There are a variety of ways to measure the amount of debt in the farm sector, but it’s usually most interesting to compare it to the level of other values such as assets or income. Debt-to-equity and debt-to-asset ratios are probably the most commonly reported measures of relative indebtedness. But we believe it’s often more useful to look at debt relative to income-based measures.

Ratios including income or cash flow put debt in the context of the earnings generated by the sector. At the end of the day it’s earnings and cash flow that will normally be used to repay debt. The downside of using ratios of earnings to debt is that they tend to be much more volatile than purely balance-sheet measures. That’s because earnings generally fluctuate more than asset values. With that said let’s take a look at how net cash income compares to total debt in the farm sector.

Figure 3 shows the ratio of total debt to net cash income for the farm sector. Debt at present checks in at 3.88 times net cash income. That’s at the extreme end of the range seen in the past 20 years. The ratio decreased rapidly in the farm-income boom period and then increased rapidly until 2016. Since 2016 it has remained in an elevated state as incomes have rebounded along with increases in debt levels. 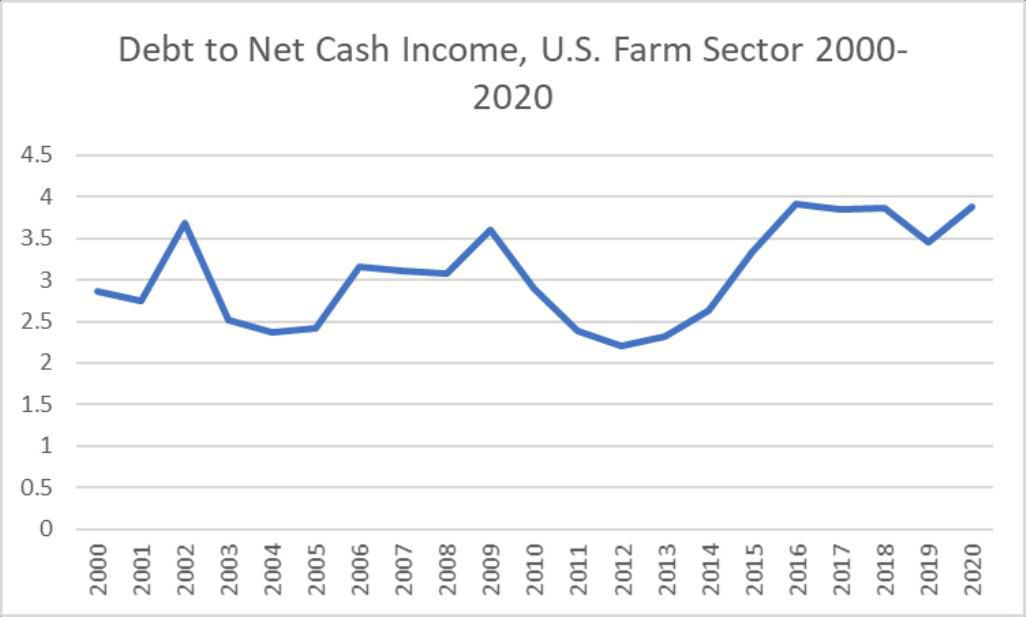 The question is whether that represents a level that is sustainable, has room for continued growth or is too high. If one were to consider a longer history – that included the financial turmoil of the 1980s – that level of debt to net cash income is small. During that period of time the debt-to-cash-income ratio peaked at 5.6 in 1981. While the current ratio is considerably less, we find little comfort in that fact. Clearly when the ratio reached those levels it was unsustainable. In other words we don’t want to go to those levels.

Looking back across time, the only period that the ratio has been at consistently more than 4.0 was from 1976 to 1984, which was the income increase and fall from the 1981 peak. It’s true that interest rates are reduced at present. That helps to reduce the interest portion of debt service and would suggest that the sector can carry more debt than it could maybe 20 years ago. Still one must question whether the sector can comfortably handle much additional debt service at present levels of income.

Although there have been many stories of increased farm bankruptcies, we must also consider the fact that the current level of debt to cash income has not resulted in what we would categorize as widespread financial distress. For instance the rate of farm bankruptcies, while increasing, is nowhere near the levels observed in the 1980s. That would suggest that perhaps the current level of debt to income is acceptable going forward.

On the negative side of that ledger, one must consider that a substantial portion of net cash farm income in the past few years has come in the form of government-program payments. The troubling part of that fact is that many of the dollars have flowed from ad hoc program payments, such as the Market Facilitation Program. Those dollars must be considered more uncertain than those that would arise from payments made under the traditional farm program.

At present it would seem the current levels are sustainable, but with little room for further growth. The current level of debt to net cash income is risky territory for the farm sector. While it’s quite likely the sector will navigate through this territory with few problems, it also removes some of the room for error. For instance had the government not authorized the past two rounds of Market Facilitation Program payments, the financial condition in the farm sector would be much worse.

Any further decreases in income would potentially move conditions to an area where debt service becomes burdensome. It’s also true that bad outcomes are by no means a foregone conclusion. Things could and probably will most likely turn out alright. But should the ratio continue to deteriorate, much more serious attention should be paid to the farm financial situation. Any deterioration in income would push us toward the conclusion that debt is approaching levels that should be viewed as too much.