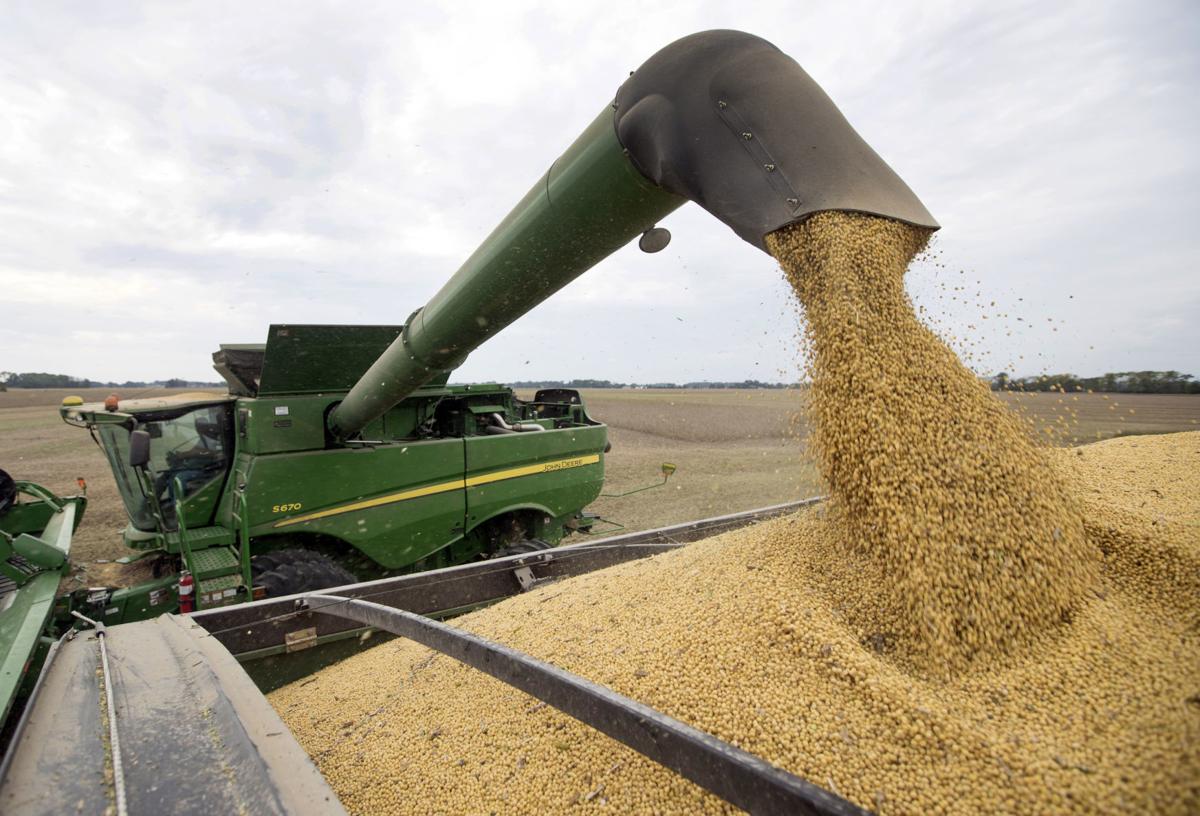 The U.S. Department of Agriculture’s “Crop Production” and “Ending Stocks” reports are creating a somewhat negative tone in corn and soybean markets.

The U.S. Department of Agriculture’s “Crop Production” and “Ending Stocks” reports are creating a somewhat negative tone in corn and soybean markets.

The anticipated release of the U.S. Department of Agriculture’s “Crop Production” and “Ending Stocks” reports this past Friday created a somewhat negative tone in corn and soybean markets.

Despite the slightly bearish tilt, prices for both commodities closed better Friday. The pending “phase one” trade agreement as well as South American production prospects look to set the tone for prices for the near term.

Corn production in 2019 for the United States came in at 13.69 billion bushels, an increase of 31 million bushels from the previous forecast – on increased national average yields. Average corn yield of 168 bushels per acre is one bushel more than the previous forecast. The harvested acreage estimate of 81.5 million acres decreased from the November forecast of 81.8 million acres. Current production estimates for corn show 8 percent of the crop still in the field. That opens the estimate to possible revision in the future. 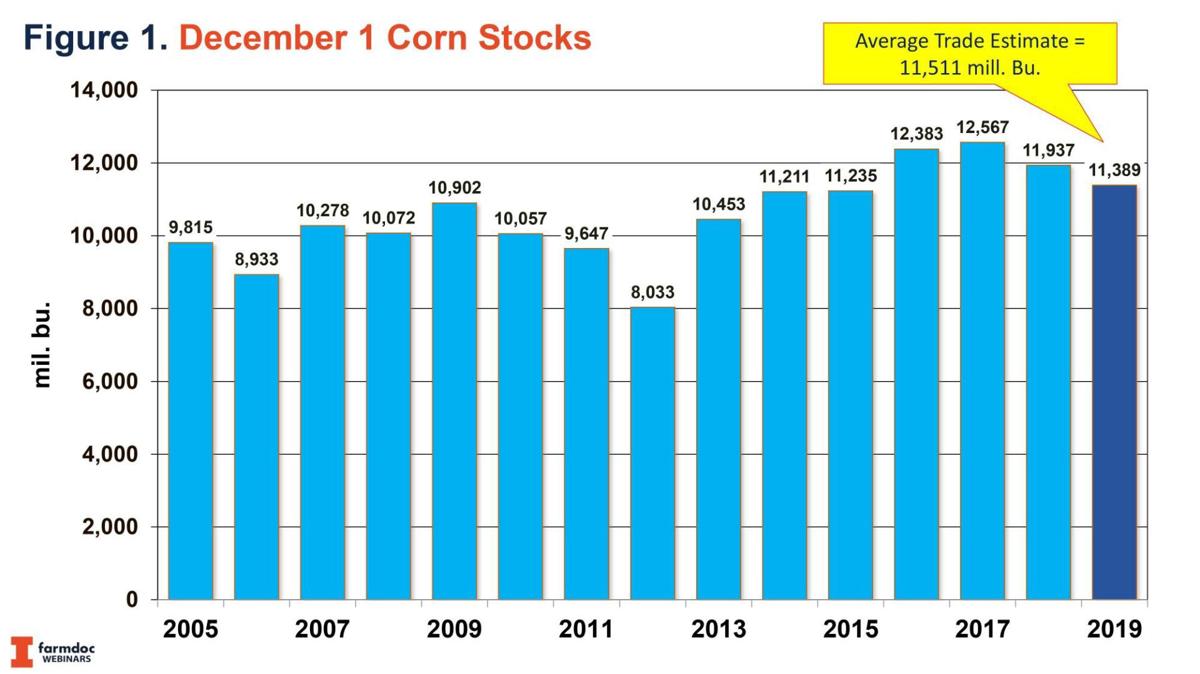 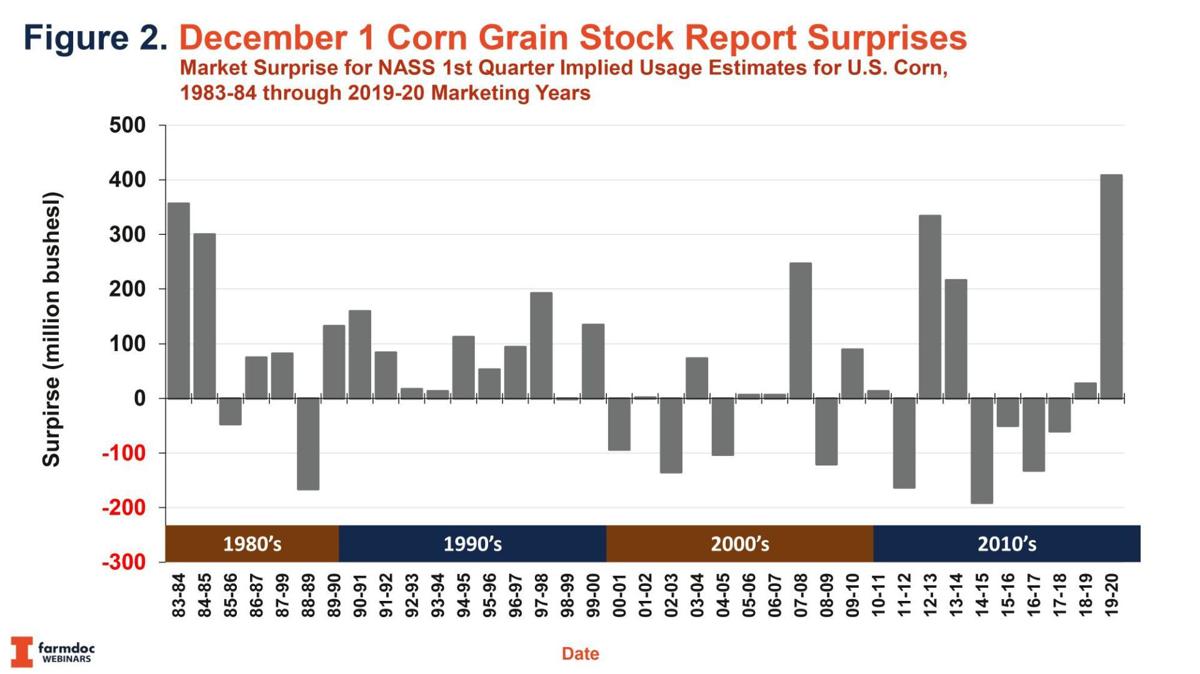 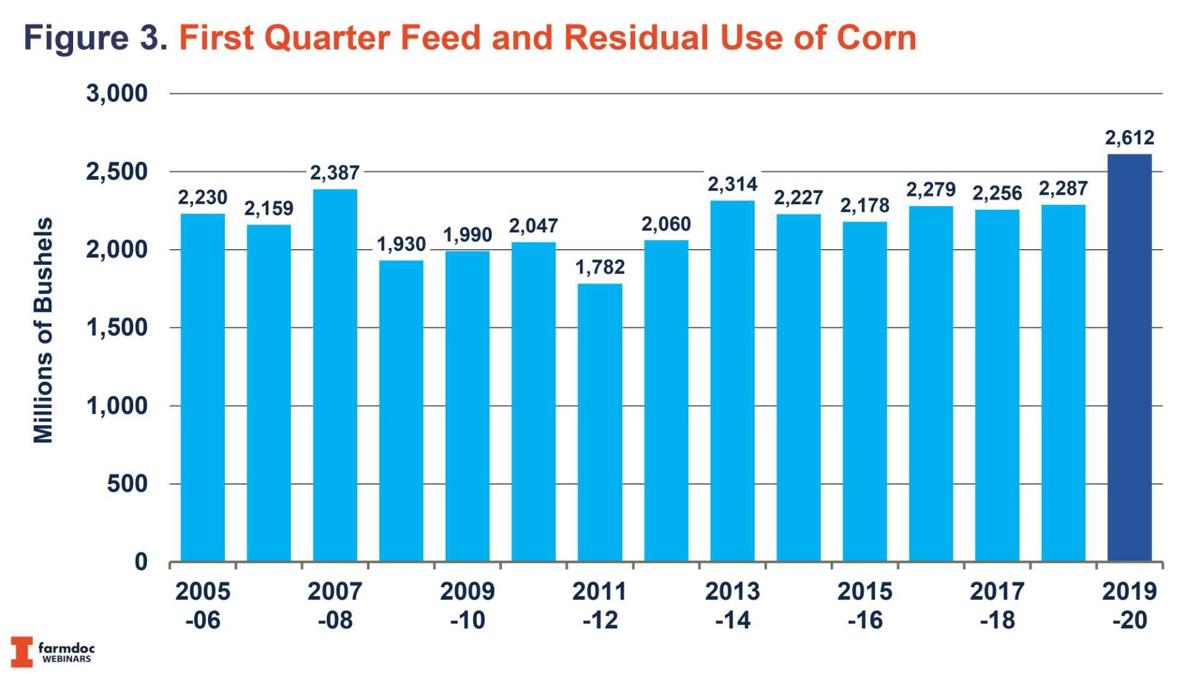 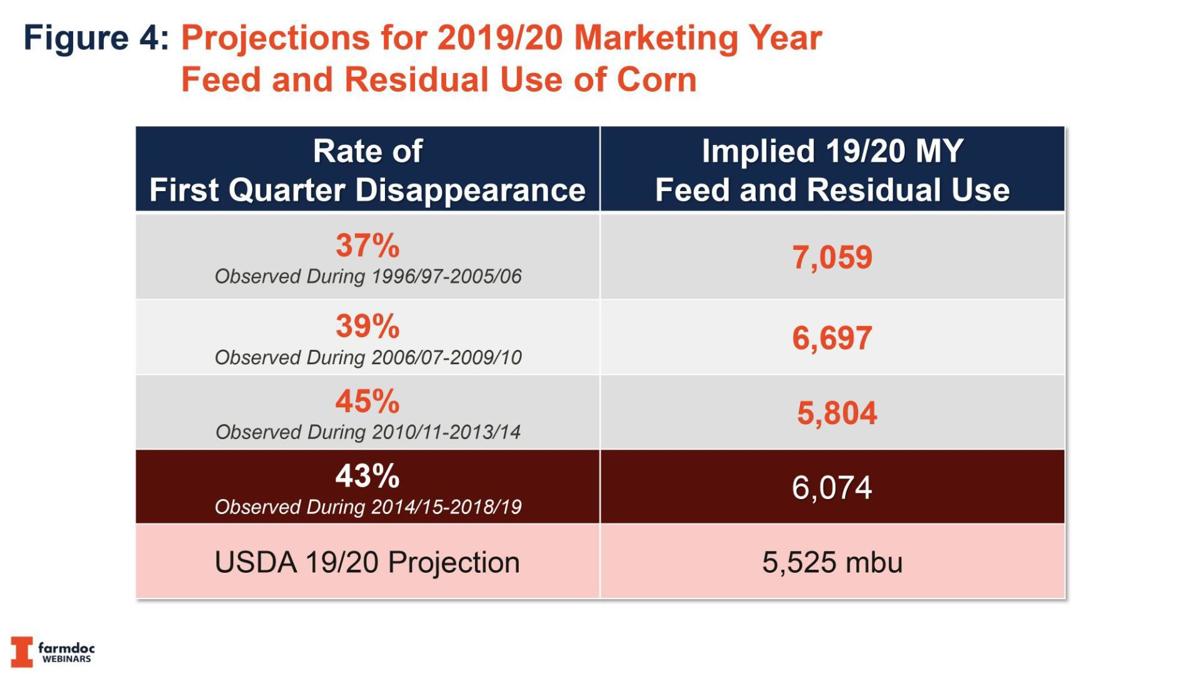 The pending trade deal with China holds the promise for change in some of the consumption totals. The phase-one trade deal due to be signed sometime this week still lacks specificity. The U.S. administration continues to tout agricultural-export increases at $16 billion more than 2017 totals of $24 billion. But there has been little confirmation from the Chinese side thus far. The Chinese indicated they would not exceed their global quota on corn imports for any individual country in 2020. The quota for corn stands at 7.2 million metric tons, almost 283 million bushels.

Through November 2019, Census data indicate China imported 12.3 million bushels of corn from the United States during the calendar year. But there remains plenty of room for increased Chinese imports of U.S. corn and corn-related products in 2020 despite the quota. Details surrounding the trade deal will help shape price prospects for corn during the next few months. 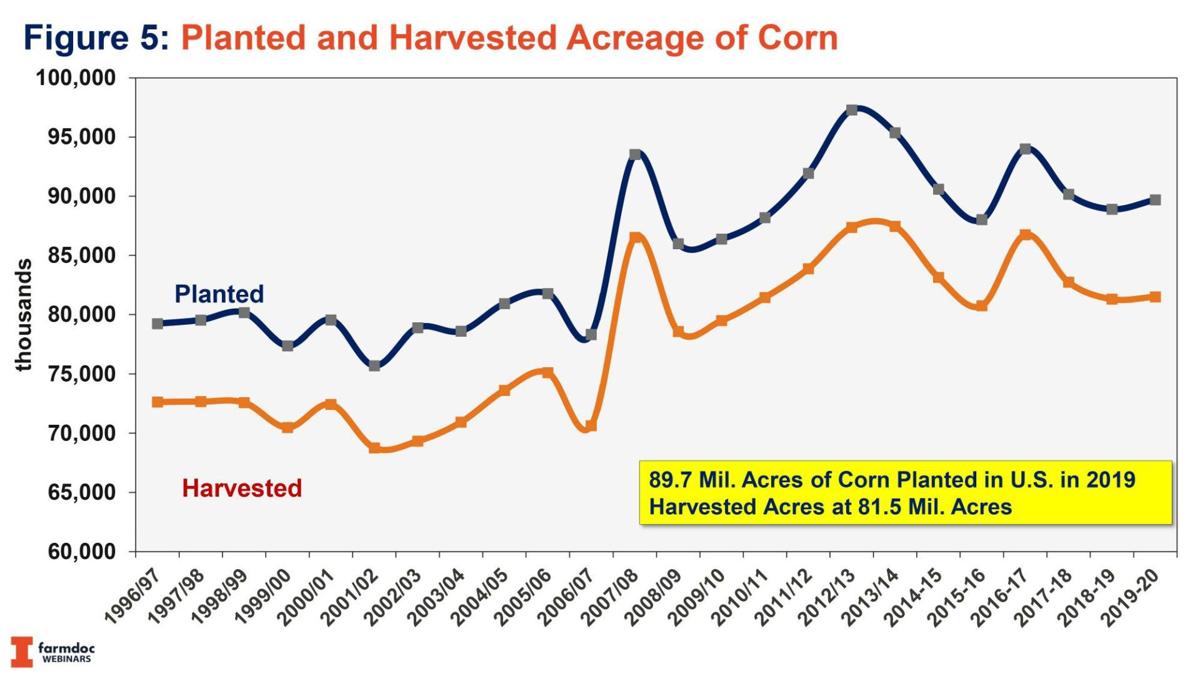 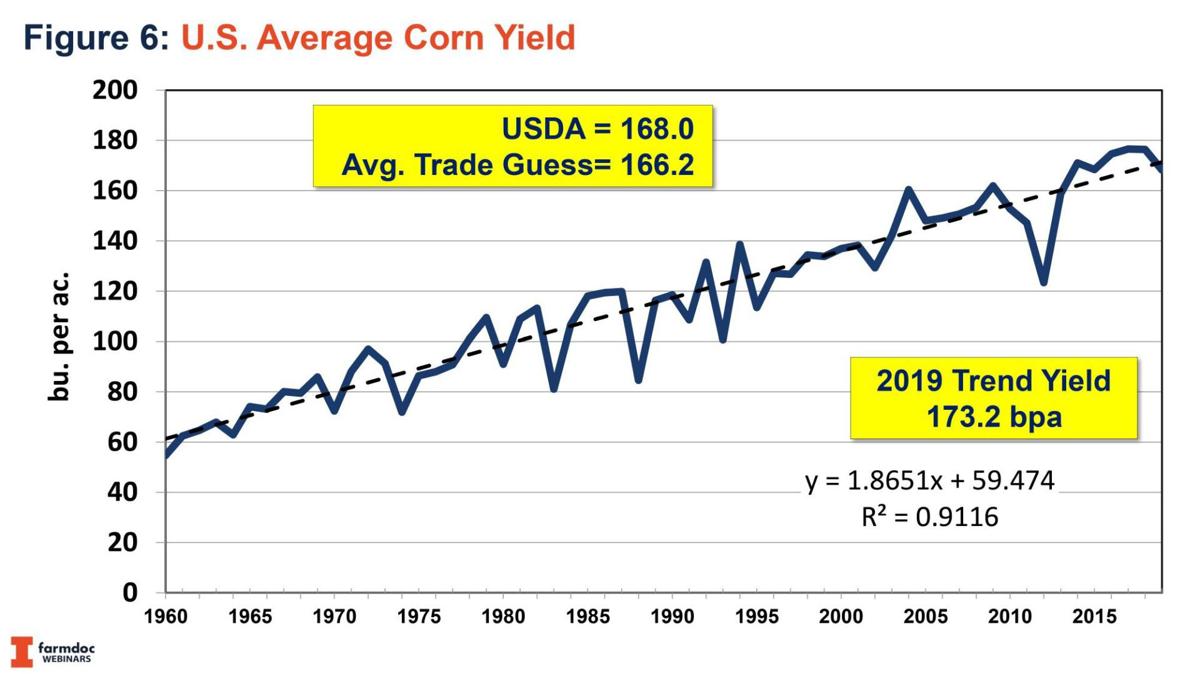 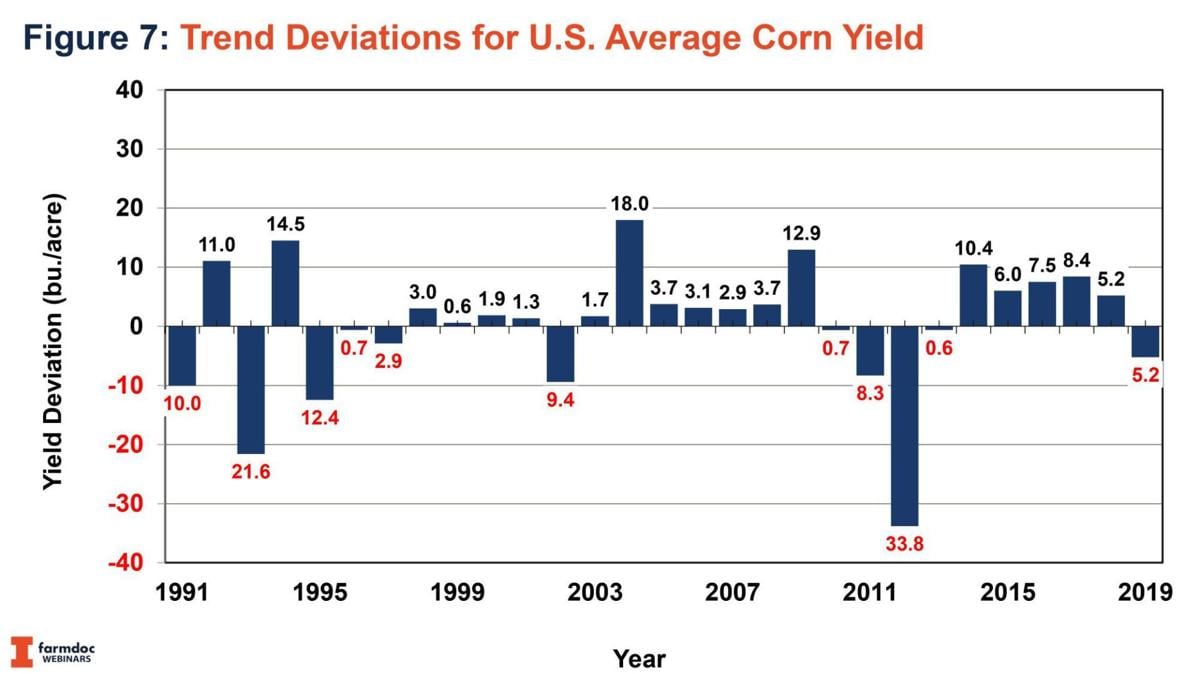 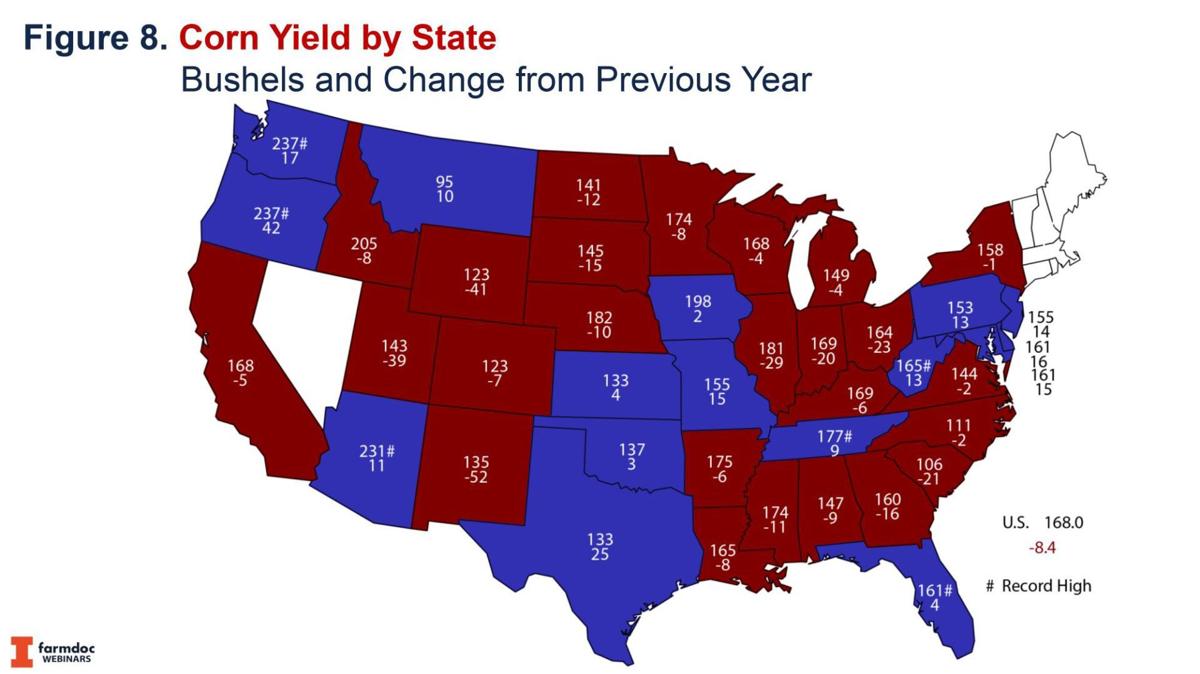 Foreign production projections for corn in the 2019-2020 marketing year increased slightly due to an increase in European Union and Russian production. Brazil’s corn-production forecast stayed at 3.98 billion bushels. Concerns about production losses for first-crop corn in southern Brazil due to dry conditions continue to evolve. Strong domestic corn prices in Brazil point to producers planting the safrinha crop even if planting is later than ideal in many areas.

Argentinian production forecasts stayed at 1.97 billion bushels. The forecast for Argentina and Brazil corn exports sit at 2.73 billion bushels, 335 million bushels less than the previous marketing year. Given the current forecast for South American exports, the evolution of crop conditions in the region – particularly for the Brazilian safrinha crop – hold important implications for corn exports during the coming year.

Soybean production in 2019 for the United States totaled 3.558 billion bushels, an increase of 8 million bushels from the previous forecast – based on increased national average yields. The national-average soybean yield of 47.4 bushels per acre is 0.5 bushels more than the previous forecast. The harvested acreage estimate of 75 million acres decreased from the prior forecast of 75.6 million acres. Current production estimates for soybeans indicate 2 percent of the crop remains in the field. Dec. 1 soybean stocks came in at 3.252 billion bushels, 66 million bushels more than trade expectations. 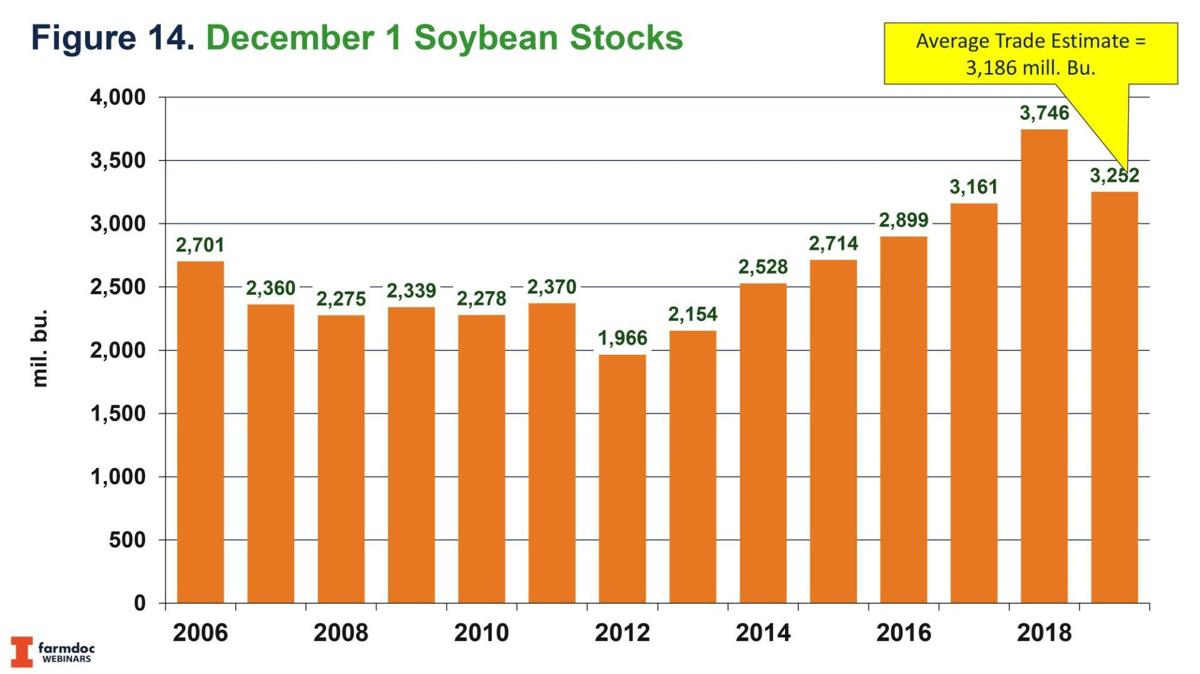 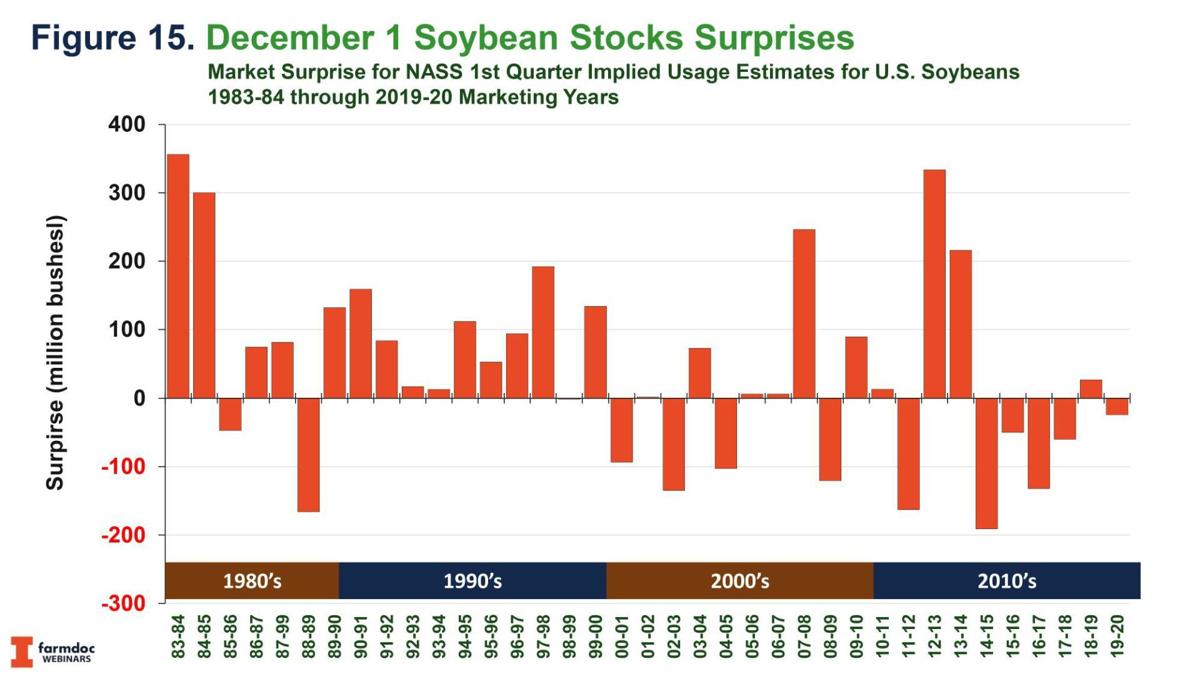 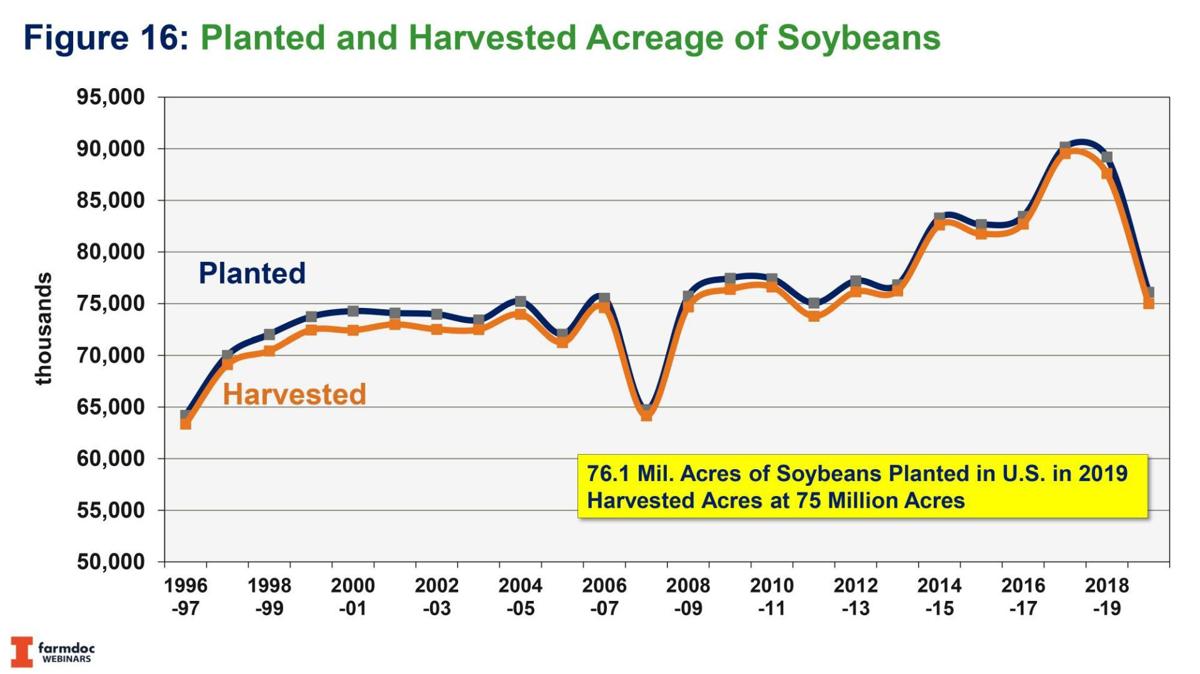 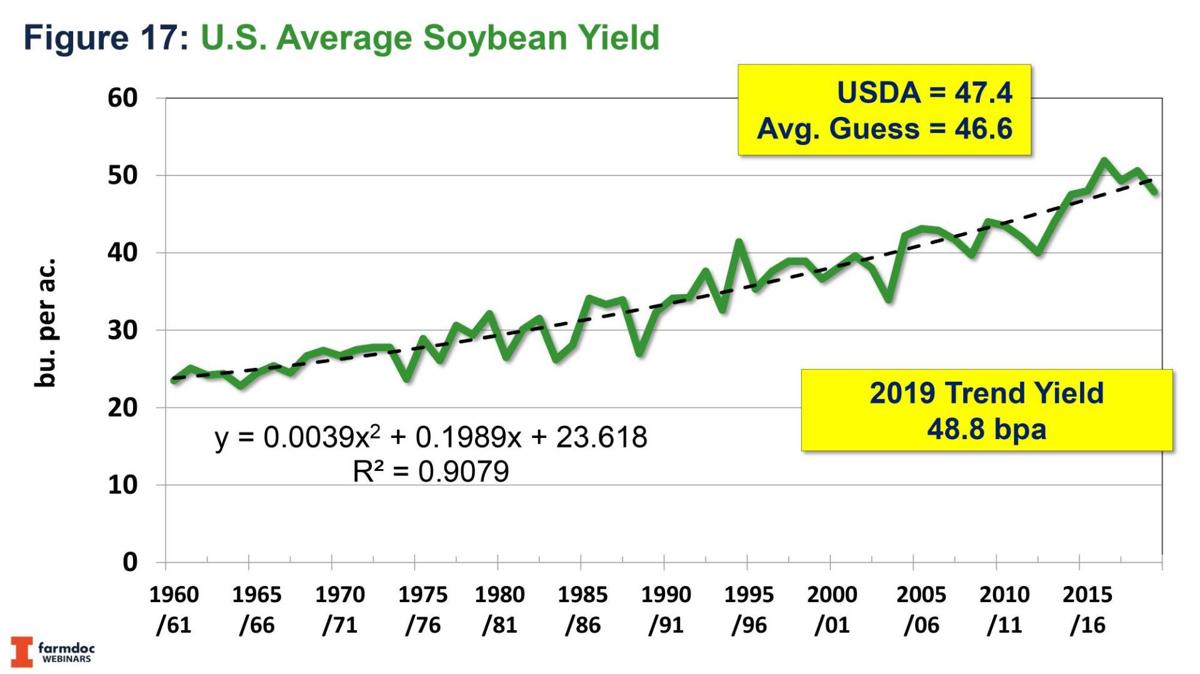 The World Agricultural Supply and Demand Estimates report maintained consumption and ending-stock projections at the same levels seen in the previous forecast. The crush forecast stayed at 2.105 billion bushels, reflecting the pace of soybean crush in the first quarter of the marketing year.

Soybean-export forecast levels of 1.775 billion bushels remained steady and mirrored the current pace of exports without the possible trade-deal impacts. Unlike corn, soybeans don’t face a quota scenario in China. A trade deal with specificity on soybean exports could provide support for prices.

Increased U.S. soybean exports to China under the trade deal may see strong substitution buying of South American soybeans by other major buyers. That may limit U.S. export potential despite a trade agreement.