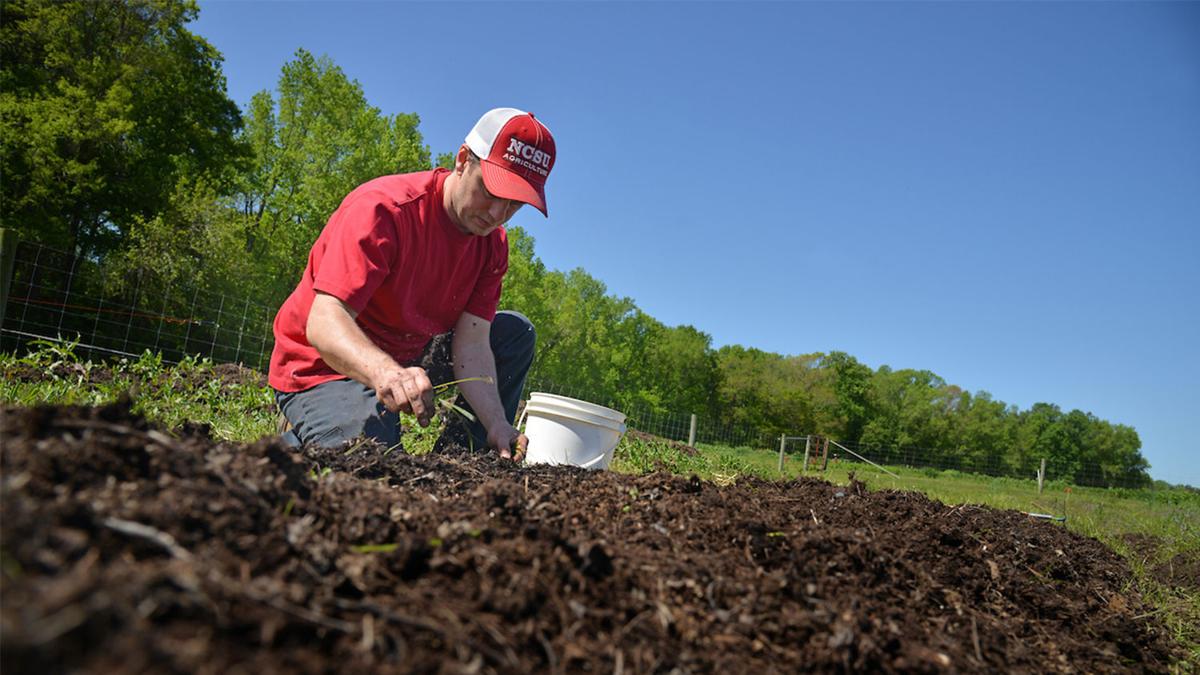 Consistent with expectations for improved farm financial performance, farmers continue to be optimistic that 2021 is a good time to make large investments in farming operations.

The Ag Economy Barometer increased in March to 177, the best reading for the barometer since the record reading of 184 in October. This month’s 12-point increase in the barometer was attributable almost entirely to agricultural producers’ more-optimistic view of the future; the Index of Future Expectations climbed to 164 – 16 points more than February’s index. Although the Index of Current Conditions, at 202, changed little from a month earlier when it stood at 200, it did mark a return to the index’s record number first reached in December. Strong ag-commodity prices and improved farm financial conditions continue to support the Ag Economy Barometer readings as we head into spring.

The Ag Economy Barometer is calculated each month from 400 U.S. agricultural-producer responses to a telephone survey. This month’s survey was conducted March 22-26, 2021. 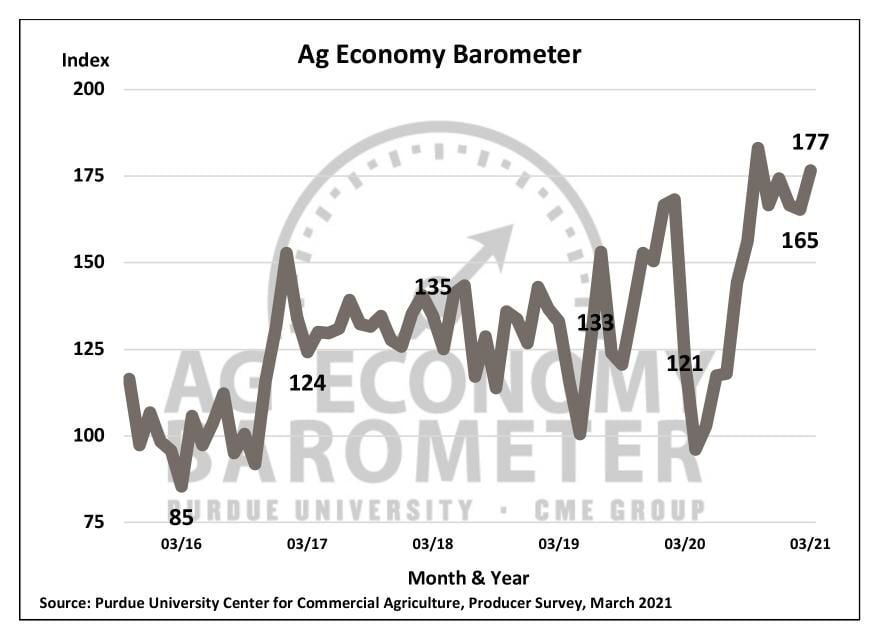 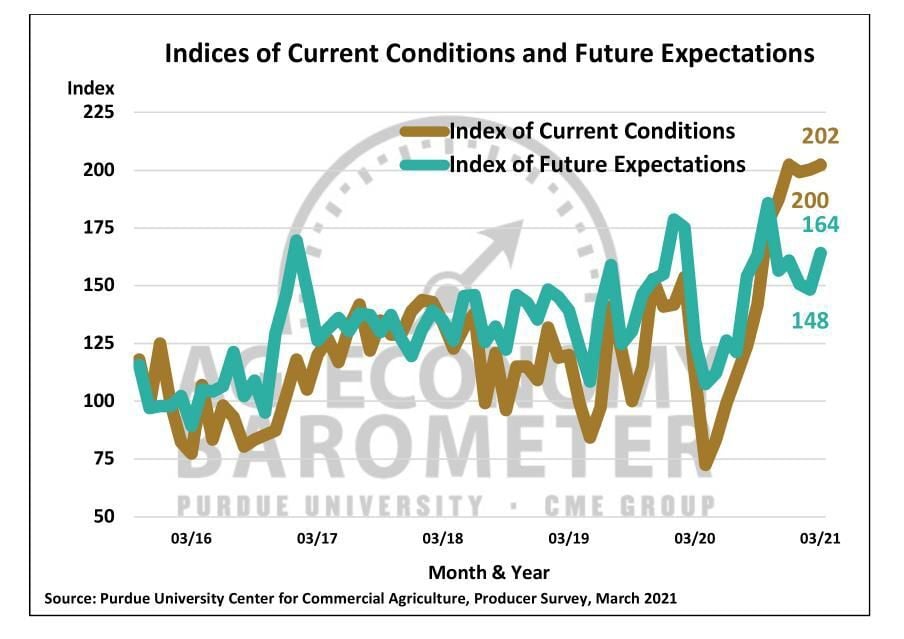 The Farm Capital Investment Index was unchanged from a month earlier at a reading of 88, remaining just 5 points less than its all-time best of 93. What a difference a year can make. A year ago farmer confidence in the ag economy was plummeting and the investment index stood at just 54. This month’s investment index is 63 percent more than it was in March 2020. Producers were a bit more optimistic in March about their upcoming farm-machinery purchase plans, with the percentage of farmers planning to increase purchases increasing 2 points vs. February, to 11 percent. The percentage planning to hold their purchases constant dipped 2 points to 53 percent. 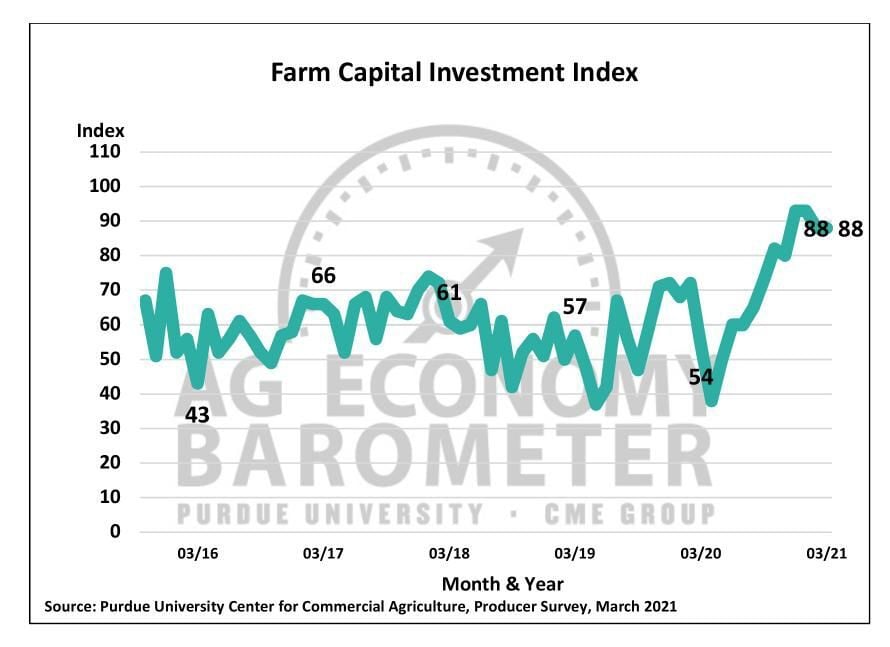 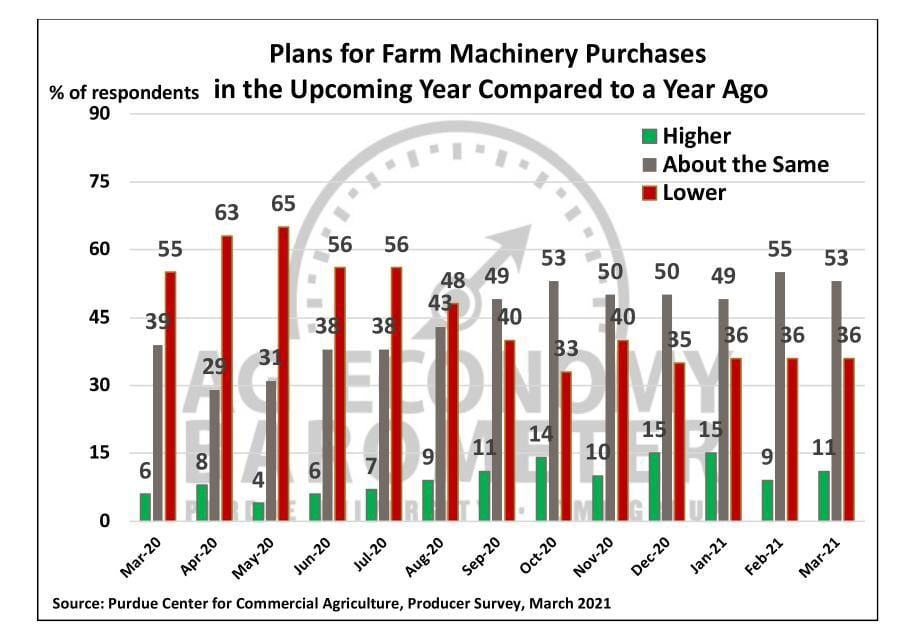 The short-term index increased again during March to a reading of 148; that’s 3 points more than in February. March’s increase marked the fourth increase in a row for the short-term index, which has more than doubled since bottoming out a year ago at 72. Producers’ long-term farmland-value expectations also increased during March, to a reading of 157. That was an increase of 4 points from February and matched the index’s all-time best reached in December. Compared to the May 2020 number of 129, the Long-Term Farmland Value Expectations Index has increased 22 percent. 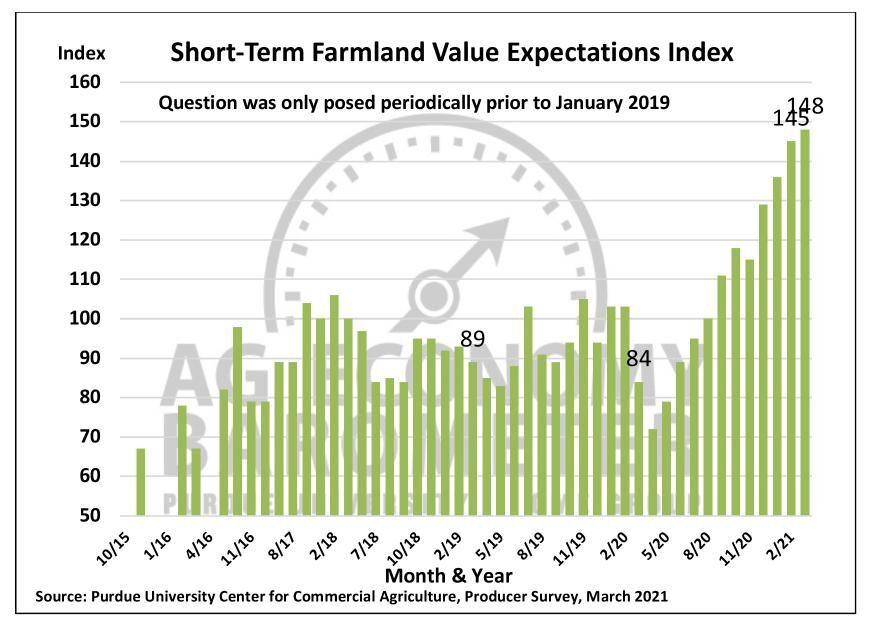 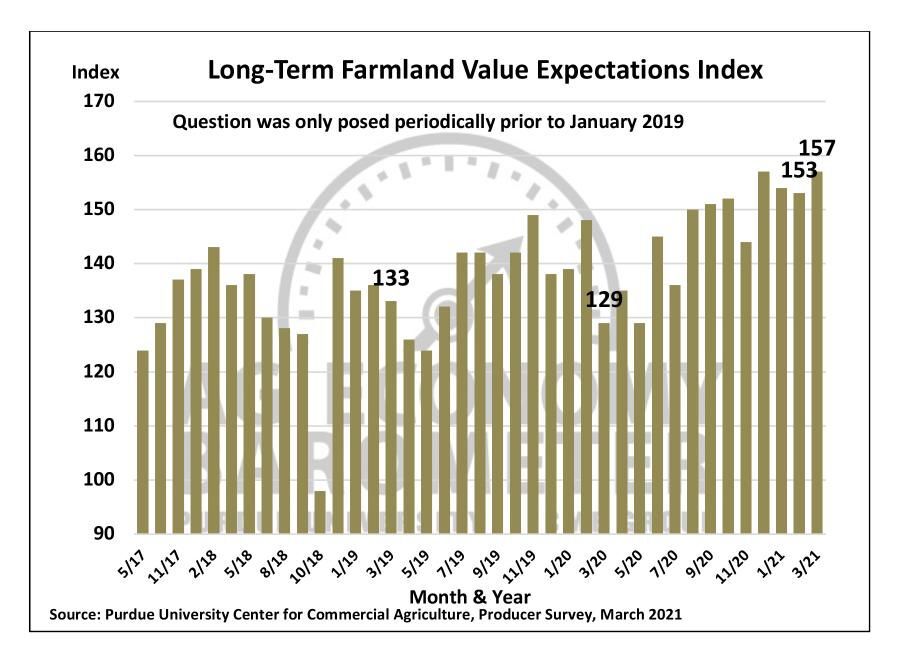 Producer perspective on farm financial position continues to improve, which appears to be fueling some of the short-term optimism about farmland values and capital investments. The Farm Financial Performance Index is based on responses to a question that asks producers, “As of today, do you expect your farm’s financial performance to be better than, worse than or about the same as last year?”

The question was first posed in April 2018 and asked again in spring 2019. Since late 2019 the question has been posed more regularly. The index bottomed out in April 2020, at a reading of 55. It then started to climb during the summer, reaching a December reading of 116. Since December the index has increased each month. In March it hit a record of 125, an increase from 121 a month earlier and from 117 in December.

Although producers became more optimistic about the future this month, as indicated by the increase in the Index of Future Expectations, they were not more optimistic concerning trade with China. The percentage of producers who expect the U.S. trade dispute with China to ultimately be resolved in a way that’s beneficial to U.S. agriculture peaked in early 2020 at 81 percent. That percentage has been declining since that time. It decreased again this month to just 31 percent, a decrease of 7 points from February.

The decline in optimism about the outcome of the trade dispute mirrors producer concerns about China fulfilling its “Phase One” trade agreement with the United States. Back in October 59 percent of producers said they expected China to fulfill its Phase One obligations, but that percentage has been declining continuously since this past fall. In January it decreased to 40 percent; in February was 37 percent and in the March survey it declined again. Only 35 percent of producers expected China to fulfill the Phase One agreement.

In a follow-up to questions on previous barometer surveys regarding carbon sequestration, 30 percent to 40 percent of farmers in our surveys during the past three months say they are aware of opportunities to receive payments for capturing carbon on their farms. Among the relatively small percentage of respondents who reported carbon-sequestration payment rates that were offered, about 80 percent of those respondents said payment rates were $20 per acre or less. About half of those indicated a payment rate of $10 per acre or less.

The Ag Economy Barometer increased 12 points in March to a reading of 177, its best reading since October 2020. The barometer’s increase was virtually all attributable to farmers’ improved expectations for the future; the Index of Future Expectations increased 16 points from February’s reading. The improvement in future expectations occurred even though producers are becoming increasingly pessimistic that the trade dispute with China will be resolved in a way that’s beneficial to U.S. agriculture.

Producers continue to be relatively optimistic about making capital investments in their farming operations. Plans for farm-machinery purchases in the upcoming year increased modestly compared to a month earlier. Producers also became more optimistic about farmland values; the Short-Term Farmland Value Expectations Index increased for the fourth month in a row. The Long-Term Farmland Value Index matched its previous best set back in December. Finally about 40 percent of the respondents indicated they were aware of opportunities to receive payments for sequestering carbon on their farms. Among producers who reported payment rates available to them, about 80 percent indicated rates were $20 per acre or less.

Consistent with expectations for improved farm financial performance, farmers continue to be optimistic that 2021 is a good time to make large investments in farming operations.