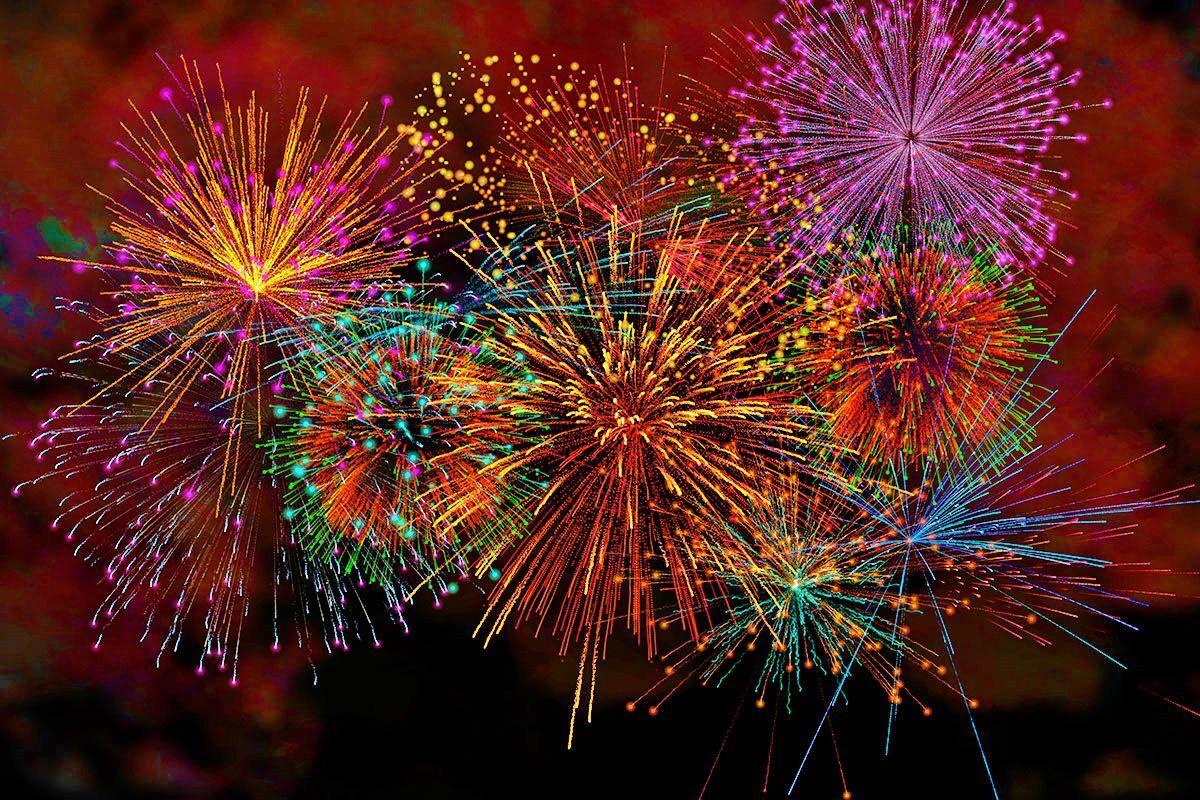 Farmers are more optimistic regarding 2021 than in 2020. The improvement in farmer sentiment is reflected in several indexes, including in a noticeably more-bullish perspective regarding farmland values.

Farmer sentiment improved modestly in December as the Ag Economy Barometer increased to a reading of 174, an increase of 7 points from November. December’s sentiment improvement still left the barometer 9 points less than in October. Both the barometer’s sub-indices, the Index of Current Conditions and the Index of Future Expectations, were more in December than in November – although the current-conditions improvement was three times the size of the future-expectations increase.

The Index of Current Conditions climbed 15 points to 202 whereas the Index of Future Expectations increased by just 5 points to a reading of 161. The farm-income boost provided by the ongoing rally in crop prices appears to be the driving force behind the improvement in the Current Conditions Index and the overall improvement in farmer sentiment. The Ag Economy Barometer is calculated each month from 400 U.S. agricultural-producer responses to a telephone survey. This month’s survey was conducted Dec. 7-11, 2020. 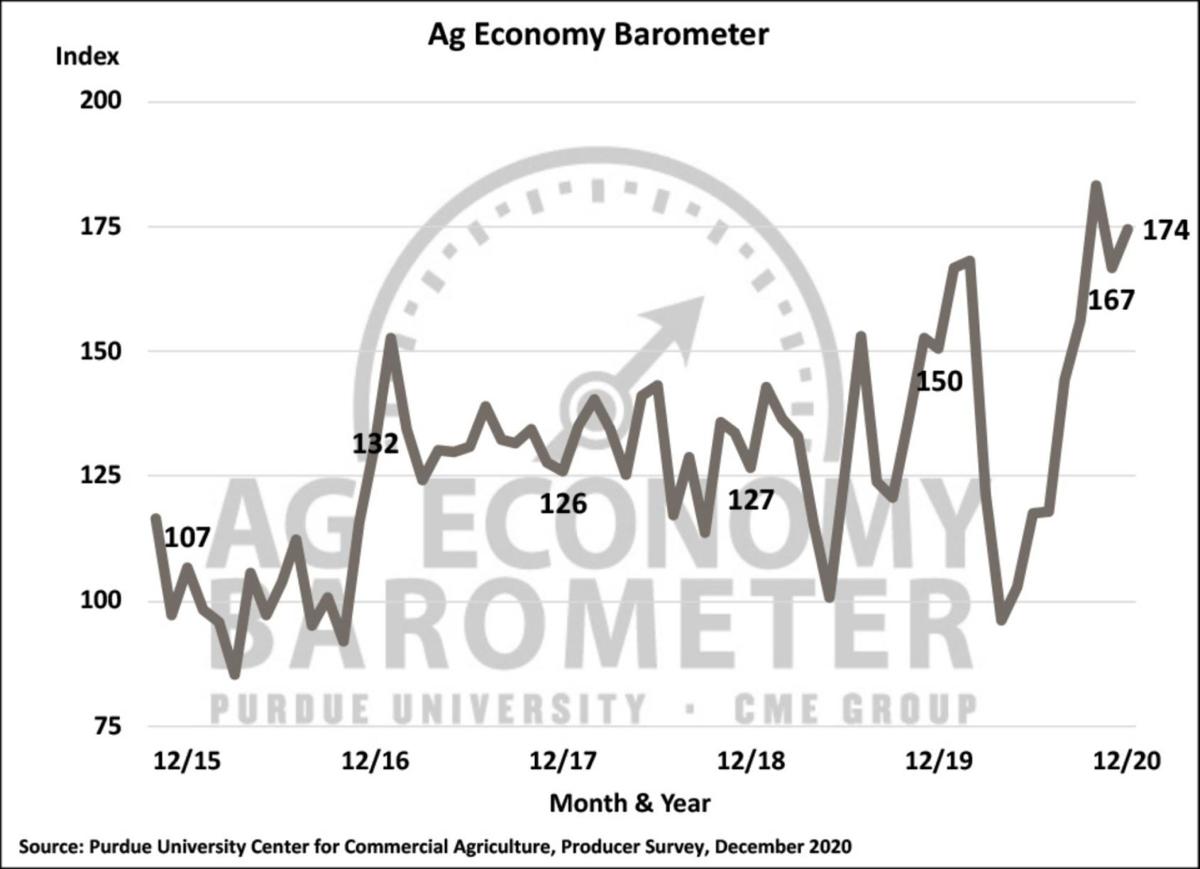 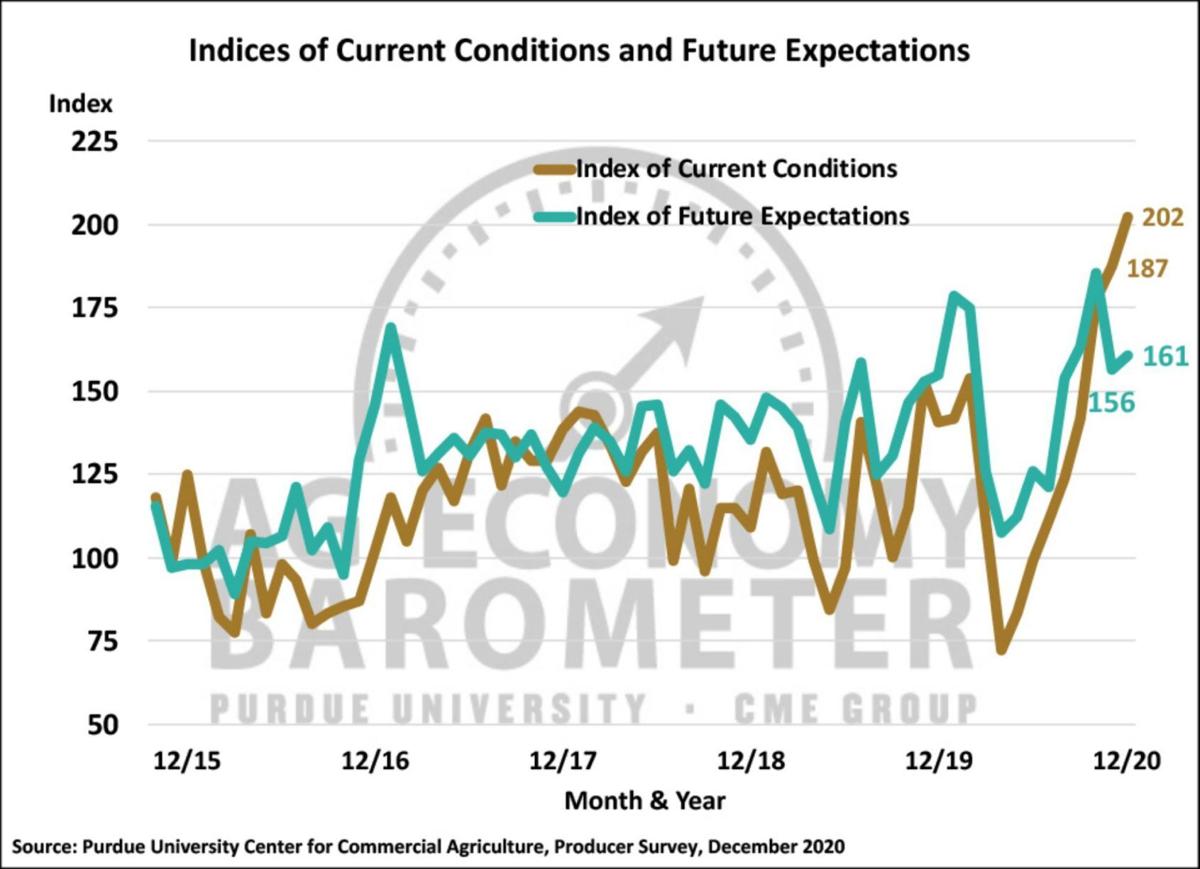 Producers were noticeably more inclined to think now is a good time to make large investments in their farming operations than in November. The Farm Capital Investment Index increased 13 points in December to a record 93. The comparison is even more dramatic when December’s reading is compared to earlier in the year. December’s investment-index reading was 28 points more than back in August, when the crop-price rally was just beginning in earnest, and is more than double the April reading of 38. When asked more specifically about their plans for farm-machinery purchases, the percentage of farmers expecting to increase their machinery purchases in the upcoming year increased 5 points to 15 percent in December, while the percentage expecting to reduce their purchases declined by the same amount. 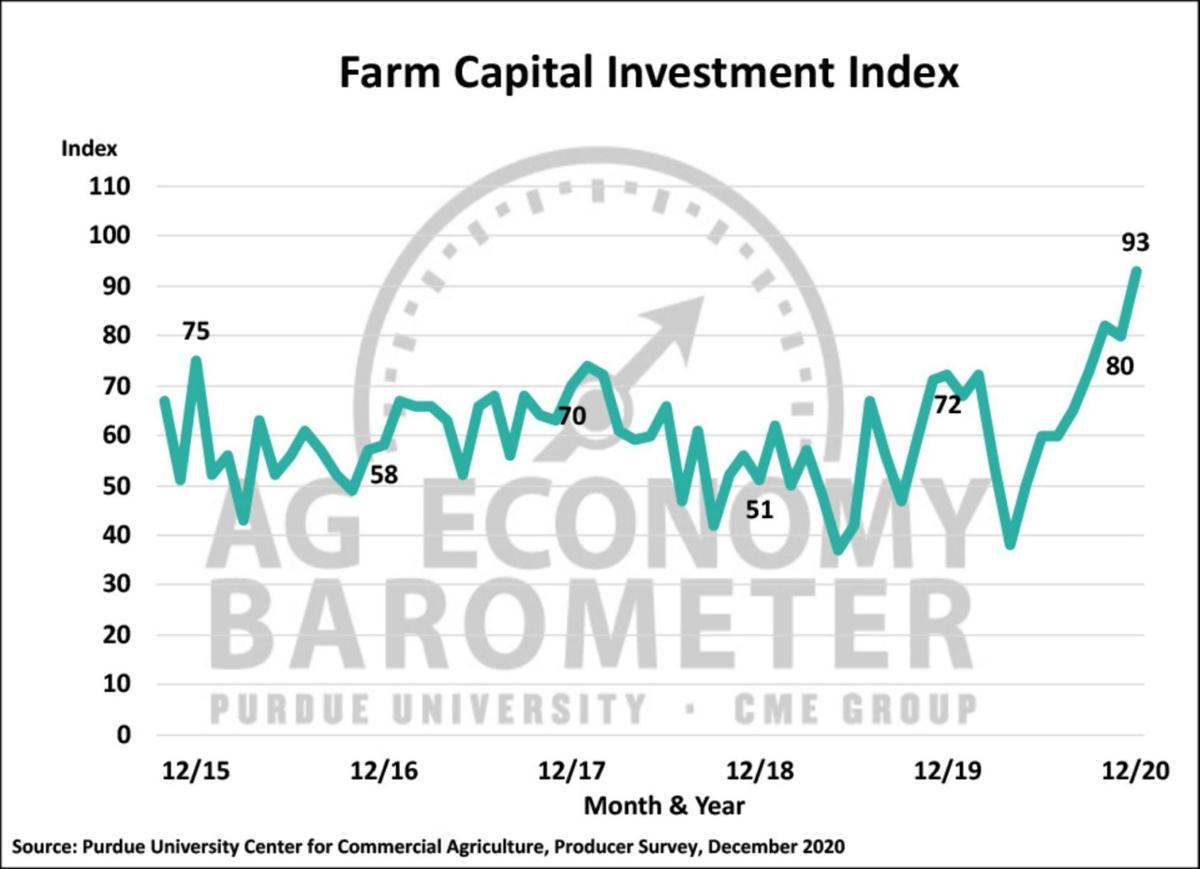 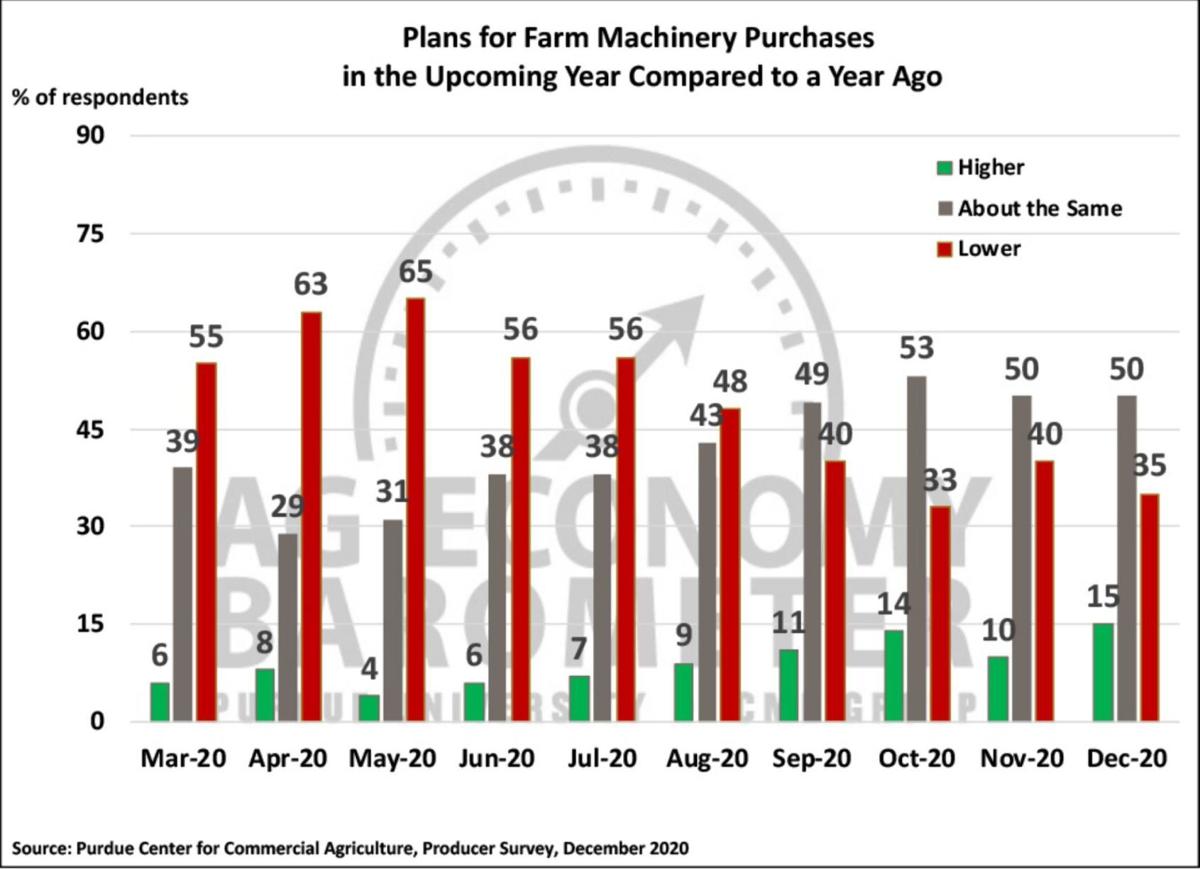 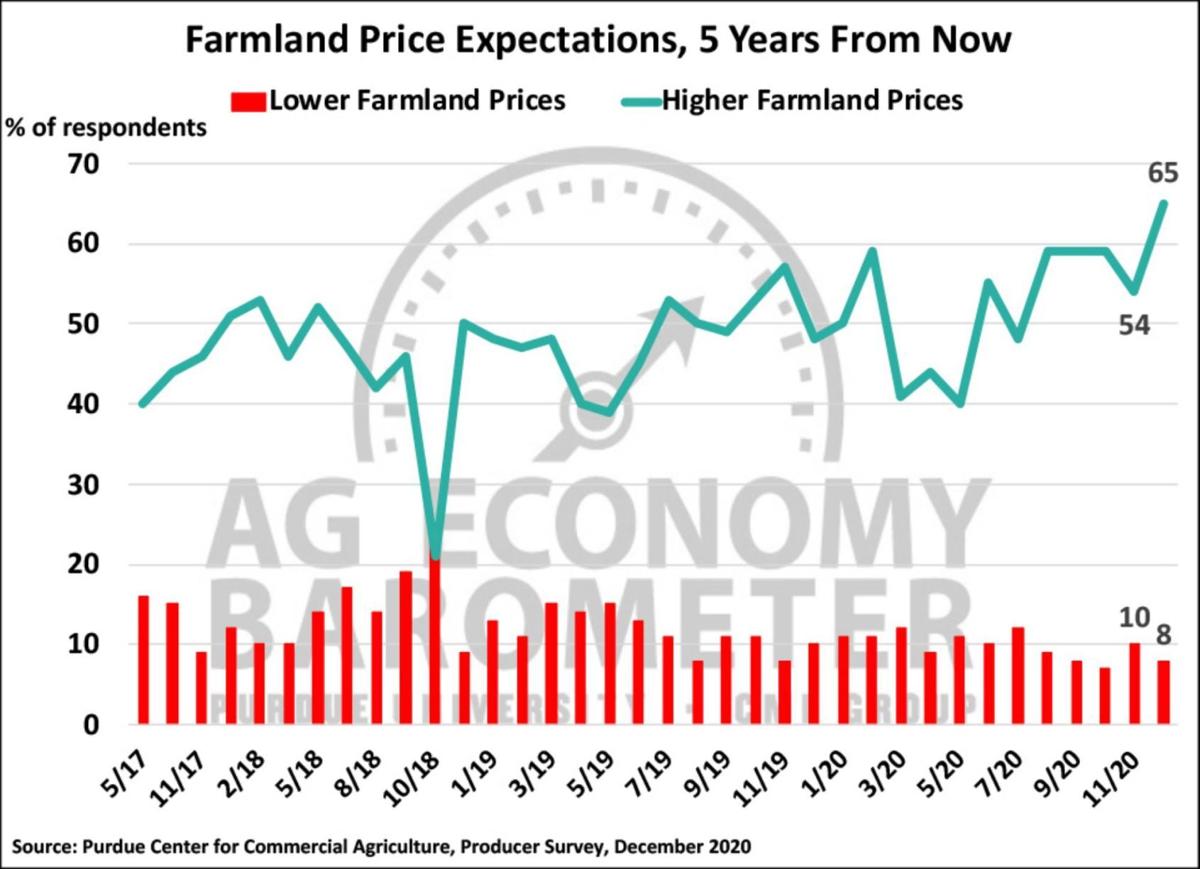 U.S. exports to China have increased substantially in recent months, especially for corn and soybeans. In turn the increase in exports has been key to the improvement in crop prices. Despite that producers have become less optimistic that the trade dispute with China will be resolved in a way that’s beneficial to U.S. agriculture. For example in first-quarter 2020 an average of 76 percent of respondents thought the trade dispute’s ultimate resolution would favor U.S. agriculture. In the spring quarter, that average declined to 62 percent and in December it decreased further, to just 47 percent.

Producers also became somewhat less optimistic about U.S. agriculture’s trade prospects as year-end approached. In the three-month period from August through October, an average of 63 percent of farmers in our survey said they expected U.S. ag exports to increase during the next five years. But ag-trade expectations were less optimistic in November and December, with an average of just 52 percent of respondents expecting to see growth in U.S. ag exports during the upcoming five years. 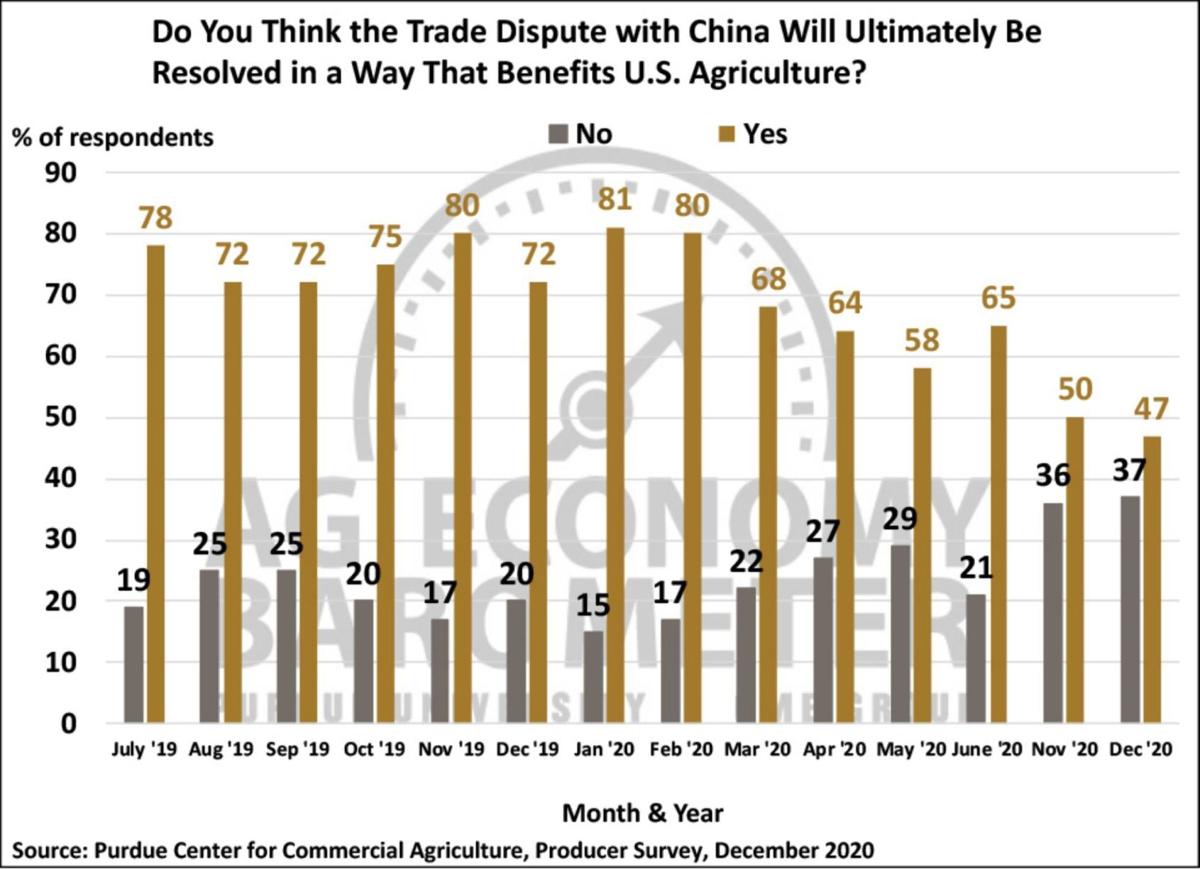 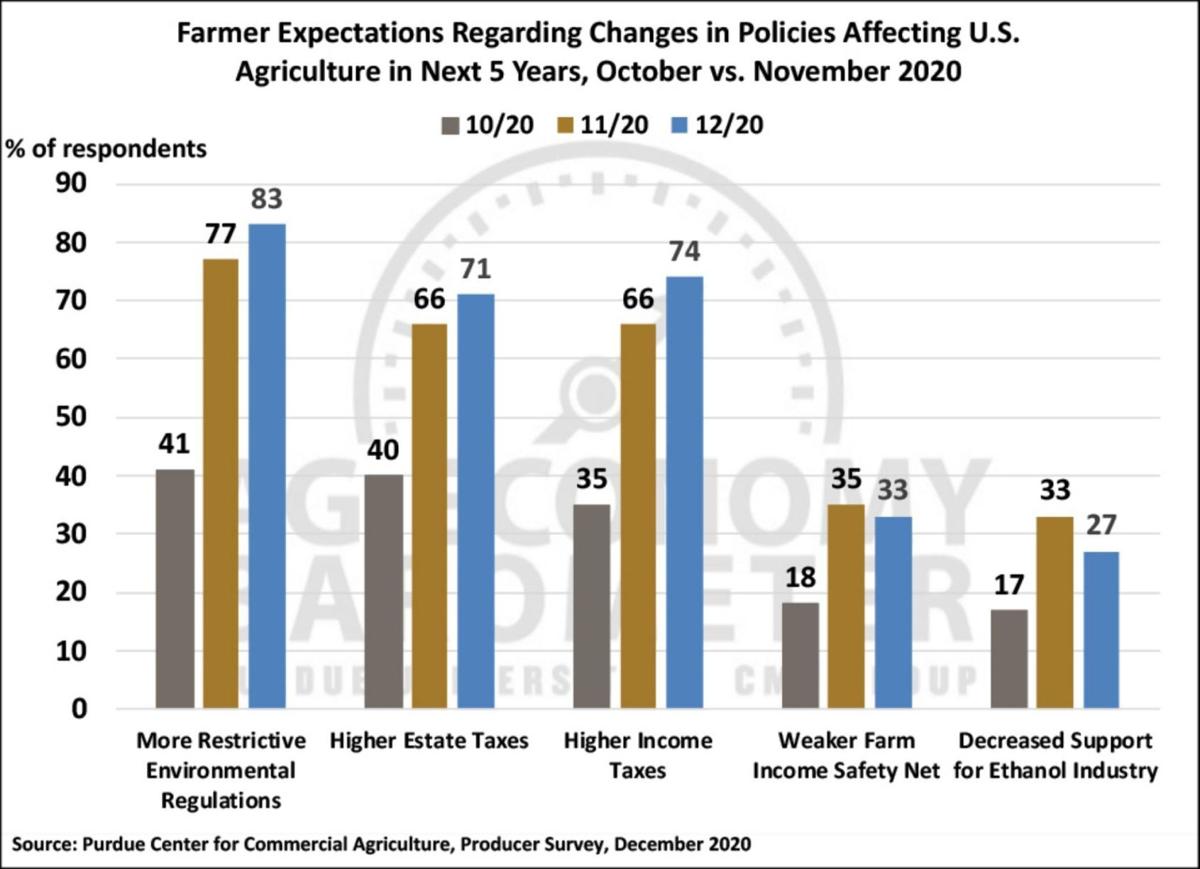 Farmer sentiment improved modestly in December, primarily as a result of farmer perception that current conditions on farming operations improved compared to a month earlier. Although the Ag Economy Barometer increased in December, it remained 9 points less than its October reading. Producers were markedly more inclined to say it’s a good time to make large investments in farming operations than a month earlier, as the Farm Capital Investment increased 13 points to a life-of-survey record reading of 93. Their optimism was also reflected in their expectations for farmland values; the percentage of farmers who expect farmland values to increase during the next five years increased to a record of 65 percent. Comparing survey results from before the November election to the post-election time frame, there continues to be less optimism following the election about future ag exports – and more concerns about increasing environmental regulations and prospects for more taxes. Additionally the percentage of producers concerned that the farm-income safety net will weaken remained more post-election than before the election, as did the percentage of farmers expecting government support for the ethanol industry to decline.

Farmers are more optimistic regarding 2021 than in 2020. The improvement in farmer sentiment is reflected in several indexes, including in a noticeably more-bullish perspective regarding farmland values.