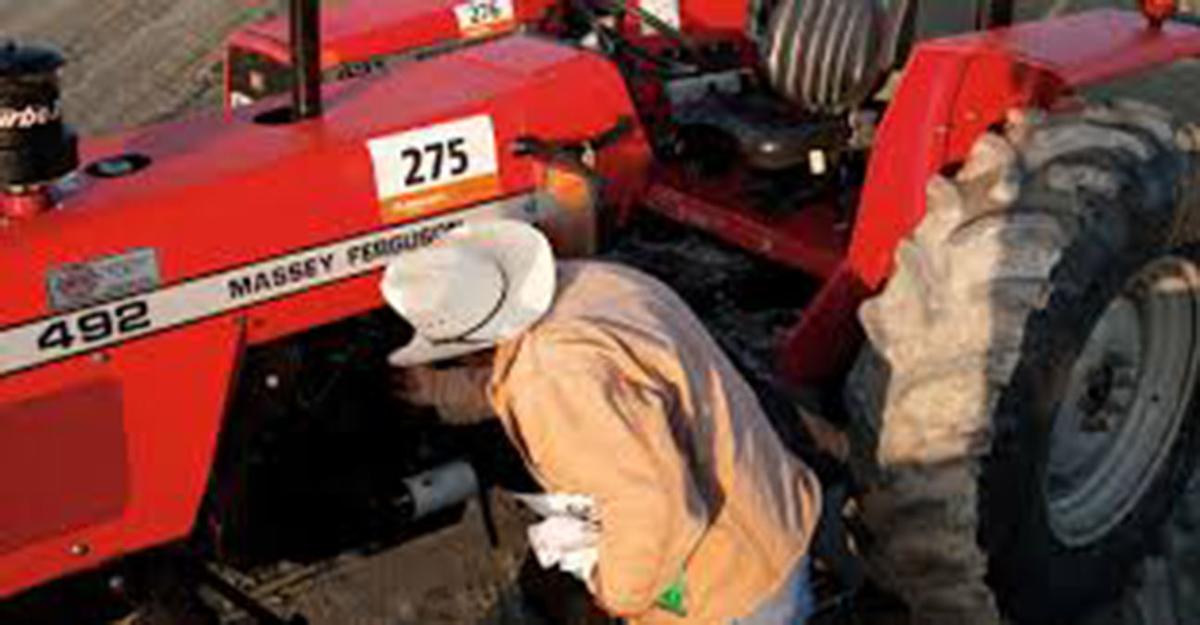 Producers have a more-favorable view regarding making large investments in their farming operations according to October's AgBarometer survey as compared to September.

Producers have a more-favorable view regarding making large investments in their farming operations according to October's AgBarometer survey as compared to September.

The Ag Economy Barometer improved to a reading of 136 in October, an increase of 15 points compared to September. That pushed the barometer back to the same level observed in October 2018.

This month’s increase in the ag-economy-sentiment index was driven by an improvement in ag-producer assessments of both current and future economic conditions in agriculture. The Index of Current Conditions increased from 100 in September to 115 in October. The Index of Futures Expectations also increased 15 points to a reading of 146.

The Ag Economy Barometer and related indices are based upon results from a nationwide telephone survey of 400 U.S. crop and livestock producers. This month’s survey was conducted Oct. 14-22. 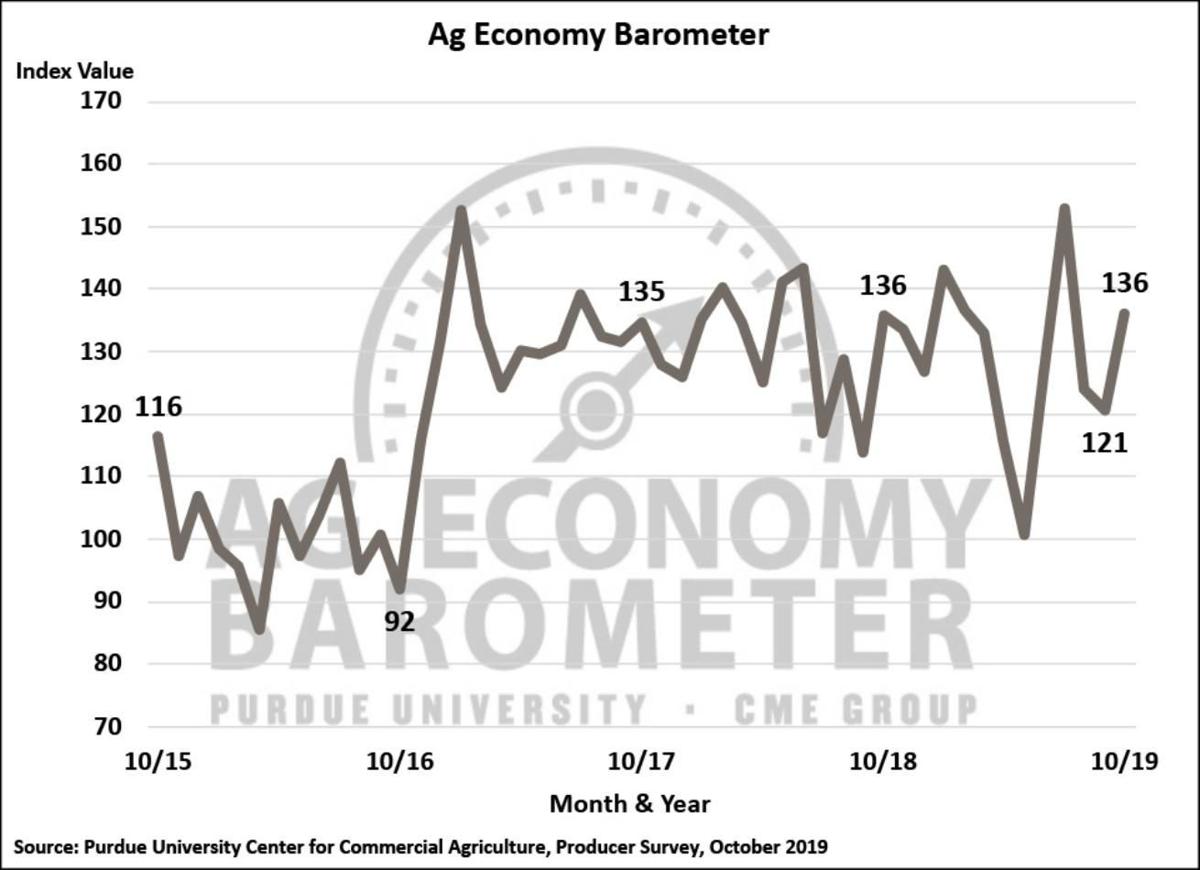 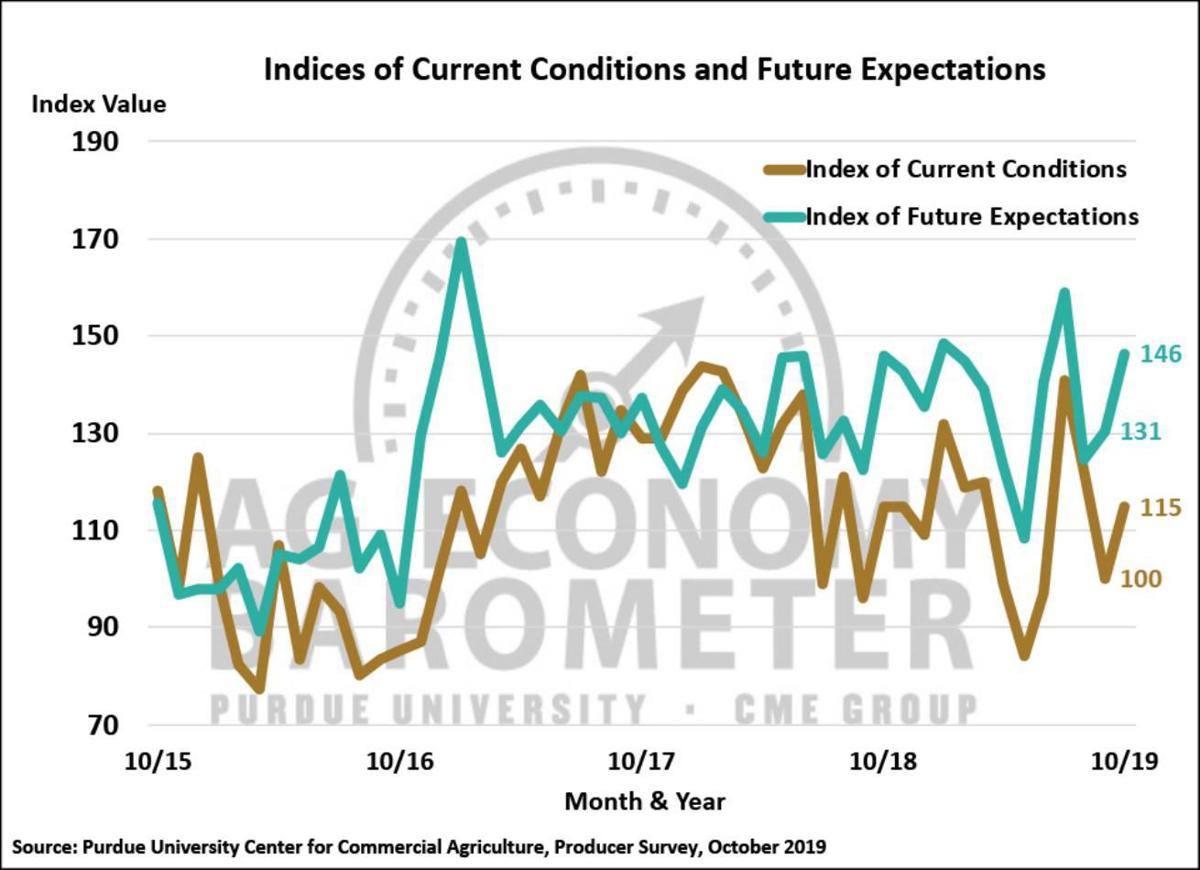 Producers had a more-favorable view regarding making large investments in their farming operations when surveyed in October compared to September. The Farm Capital Investment Index increased to a reading of 59, 12 points better than a month earlier. The investment index has been relatively volatile in recent months, dipping to 37 in May before rebounding sharply in early summer. The October reading takes the investment index back to within 8 points of its July 2019 peak of 67. 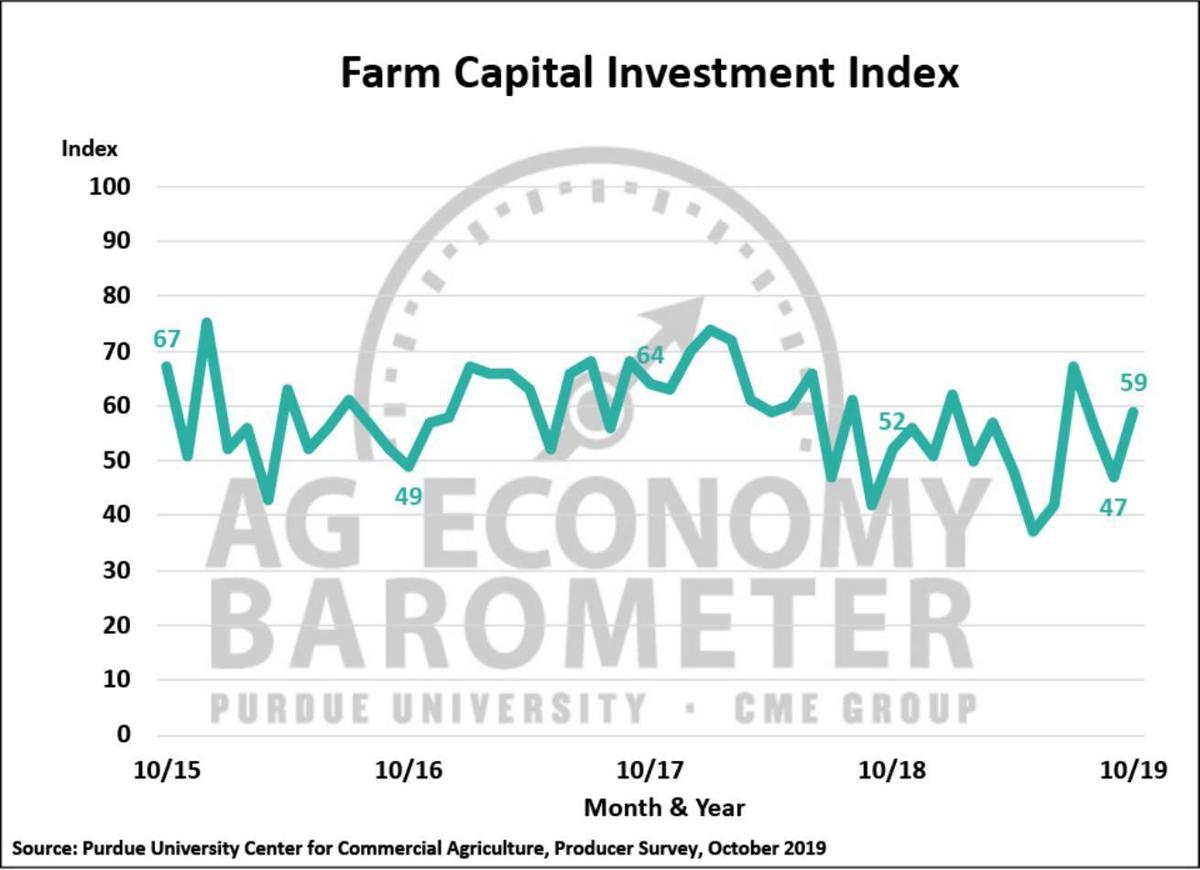 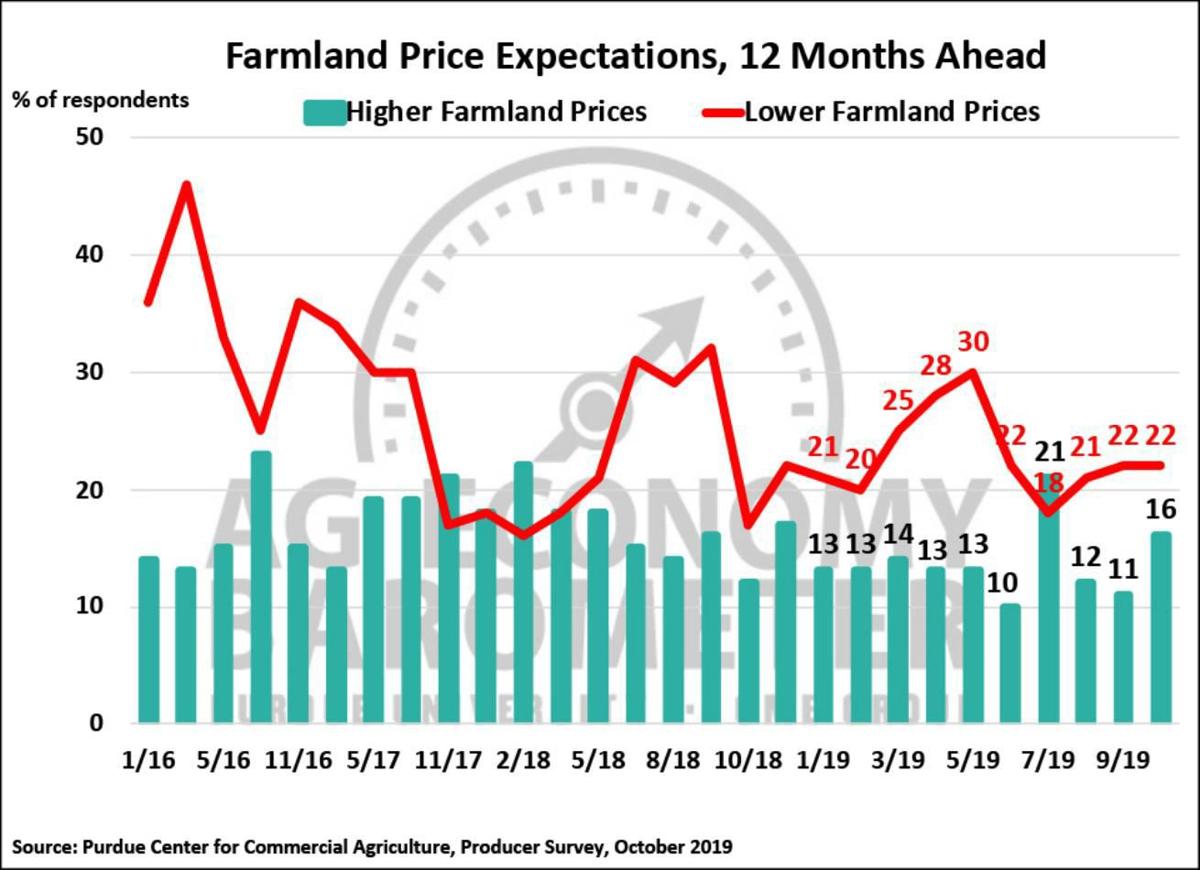 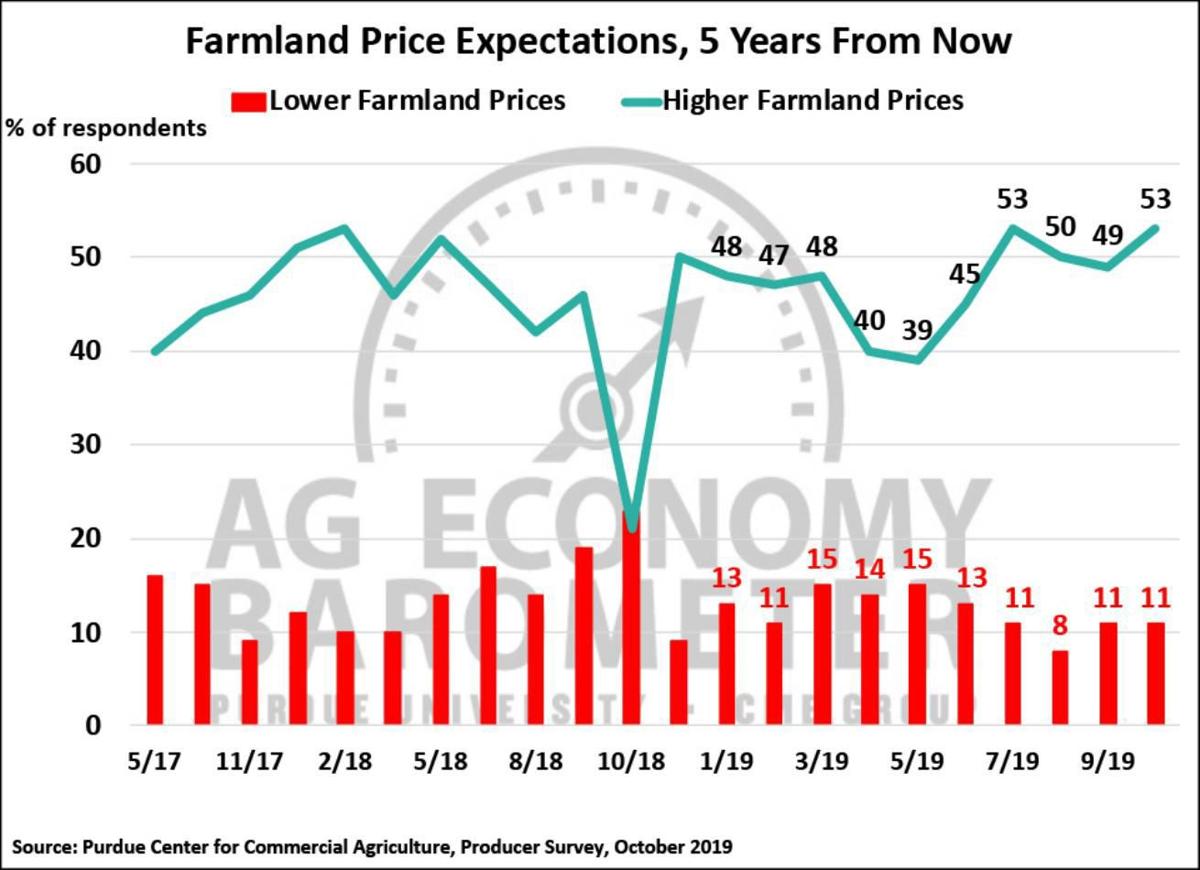 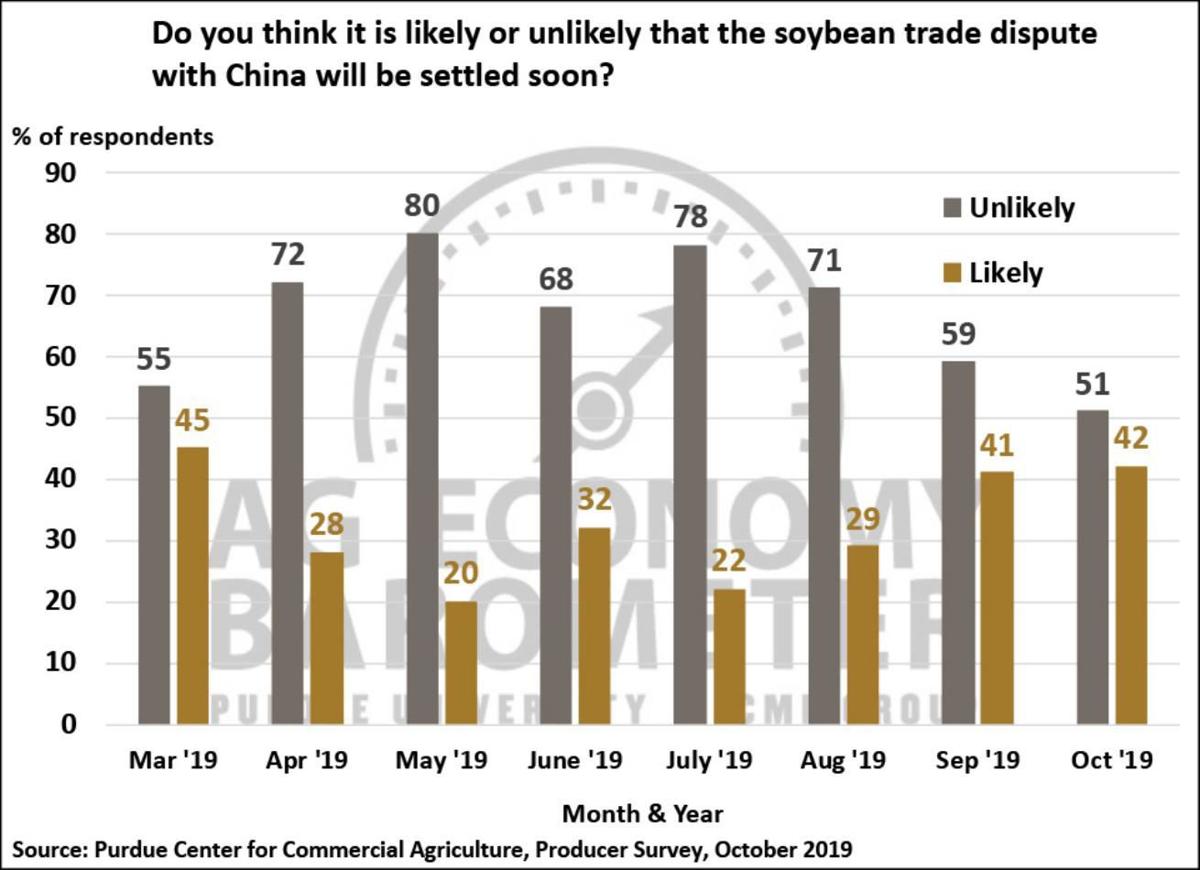 When queried about the likelihood that the soybean-trade dispute with China will be resolved soon, farmers were less pessimistic in October than they were in September. In October 51 percent of respondents said that resolution soon was unlikely, which was a decrease from a reading of 59 percent in September and 71 percent in August. The percentage of respondents who expect the trade dispute to be resolved quickly was virtually unchanged in October at 42 percent compared to September, although it remained much better than in August at 29 percent. Comparing October’s results to September’s, the primary shift in opinion was attributable to fewer respondents who said they felt quick resolution was unlikely shifting to saying they were uncertain as to whether or not the dispute would be resolved soon.

Beginning this past spring we’ve been posing a question regarding the trade dispute, by asking farmers if they think the dispute will ultimately be resolved in a way that’s beneficial to U.S. agriculture. In October 75 percent of farmers in our survey said yes to that question while just 20 percent said no. That compares to 72 percent of respondents saying yes to this question in both August and September. We’ve asked this question every month since March 2019. In six of the eight months more than 70 percent of respondents said yes, they expect the dispute to ultimately be resolved in a way that benefits U.S. agriculture. 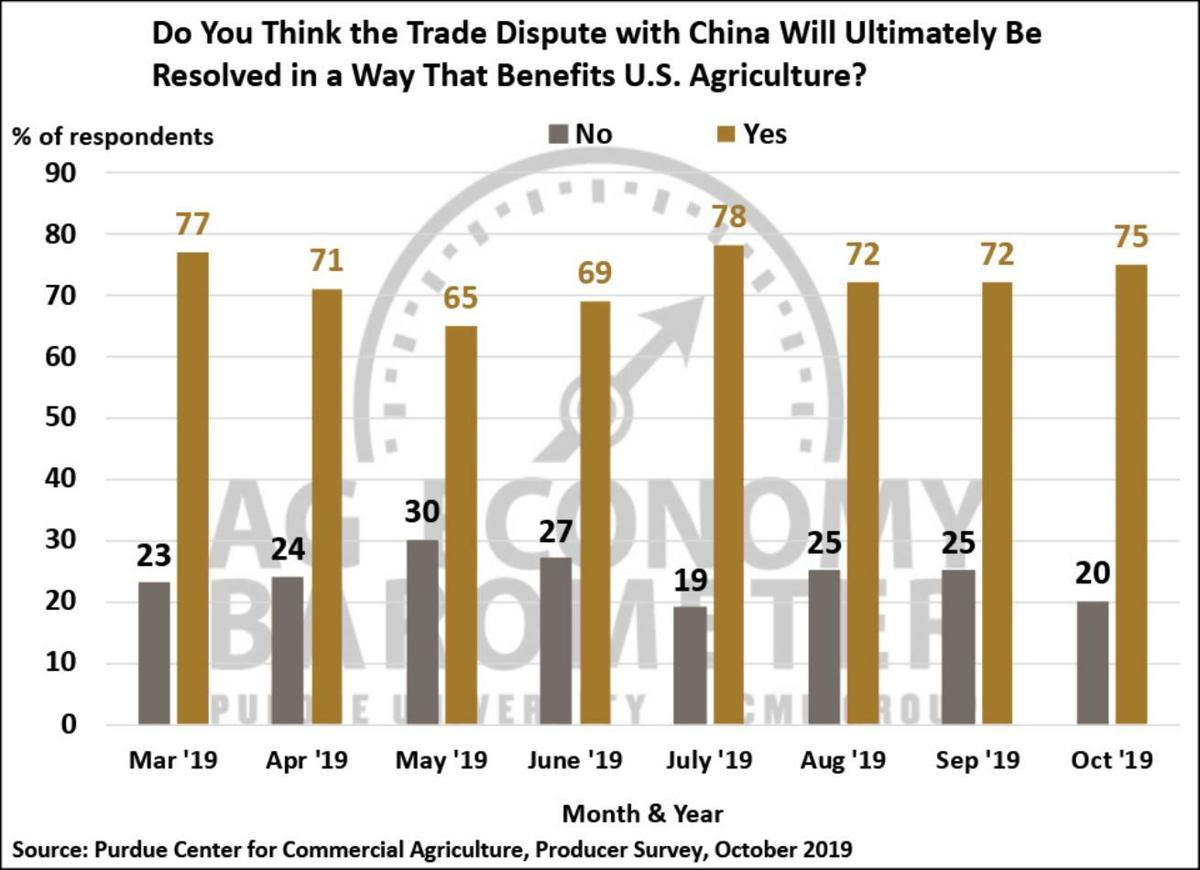 Although the U.S.-Mexico-Canada Trade Agreement has been agreed upon by trade negotiators for all three countries, it has yet to be approved by the U.S. Congress. Of respondents on our October survey, 96 percent told us that the three-country trade agreement was either important or very important to the U.S. ag economy. But only a slim majority at 55 percent of respondents said they expect the agreement to be approved soon. Similarly 97 percent of the respondents in October indicated the recently announced trade agreement with Japan is important to the U.S. ag economy. Unlike the U.S.-Mexico-Canada agreement, the pact with Japan does not need to be approved by the U.S. Congress.

Given the large prevented-plantings of both corn and soybeans in 2019, there could be a large increase in U.S. planted acreage in 2020. To learn more about farmer spring-planting plans we asked farmers who grew corn or soybeans this year if they intended to increase, decrease or keep their acreage of those two crops the same in 2020. About three-fourths of both corn and soybean producers said they did not plan to increase or decrease their acreage of those two crops in 2020. 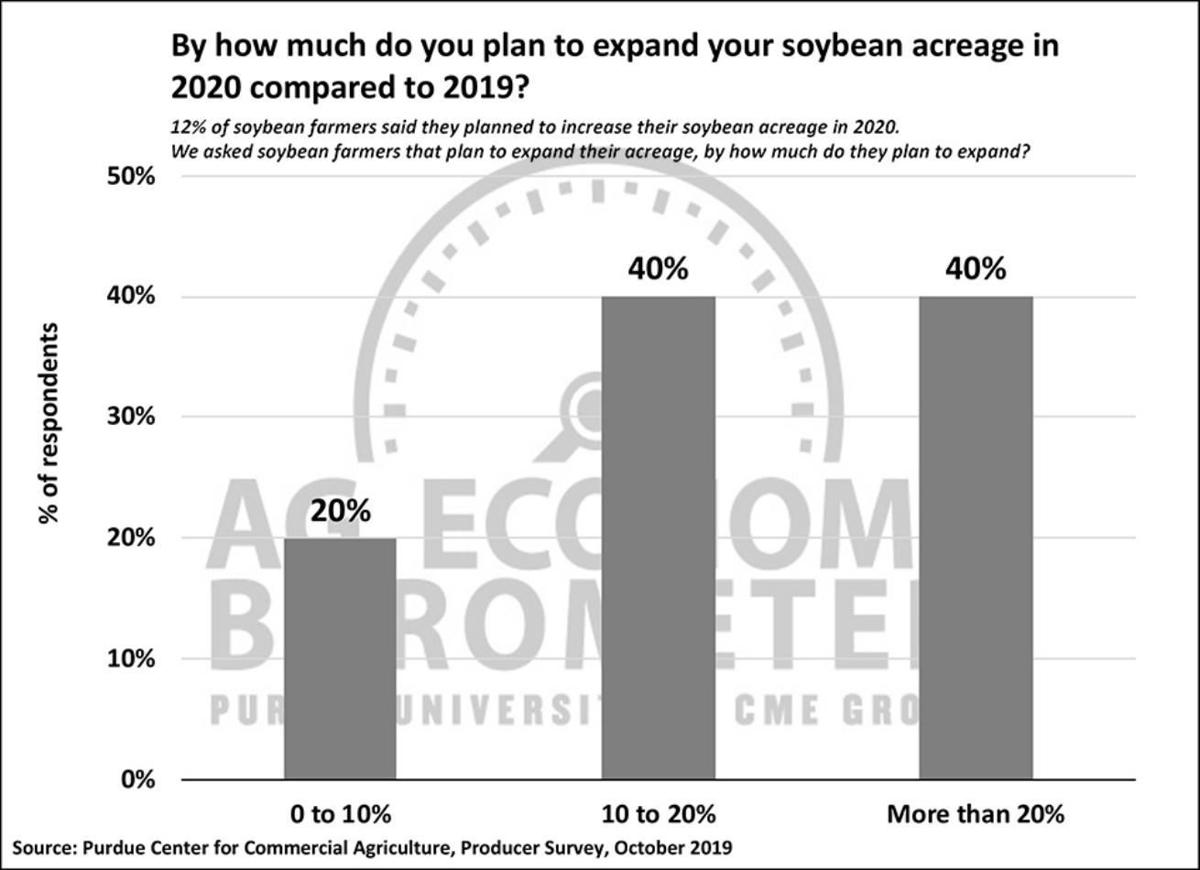 The Ag Economy Barometer increased 15 points in October as producers became more optimistic about both current and future economic conditions on their farms. Farmers in October were more inclined to think now is a good time to make large investments in their farming operations. More farmers said they expect farmland values to increased, than in September. Although three-fourths of farmers in this month’s survey said they expect the soybean-trade dispute with China to be resolved in a way that’s favorable to U.S agriculture, 62 percent of producers said they expect to receive another round of Market Facilitation Program payments for the 2020 crop year. Finally in an early look at planting intentions for spring 2020, 14 percent of corn growers and 12 percent of soybean growers said they plan to increase their acreage of those two crops compared to 2019. Most growers who plan to increase their acreage of corn or soybeans are planning substantial acreage increases.