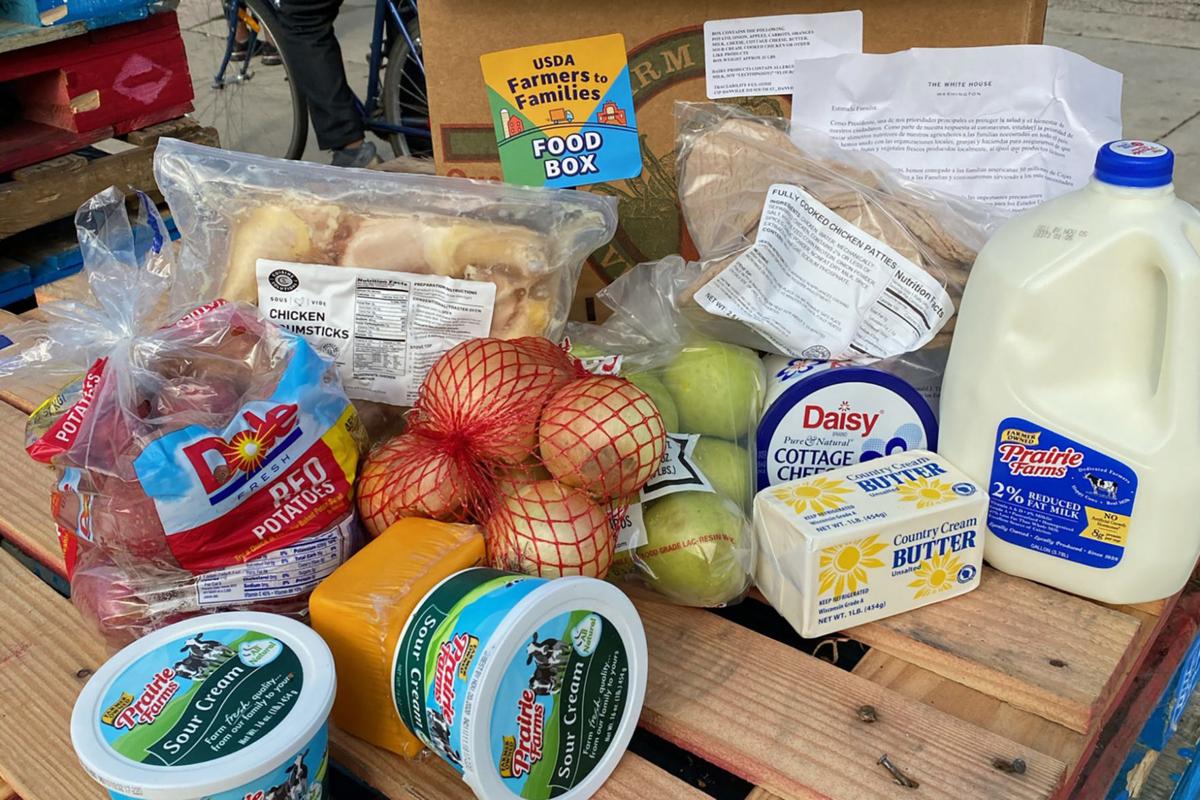 The government let a little air out of the milk markets this past week. Most Class III and Class IV futures contracts lost between 10 and 30 cents. For the past six weeks cheese prices have increased thanks to accelerating demand from restaurants and speculation that the U.S. Department of Agriculture would continue to buy and donate dairy at a heady clip. But the USDA announced April 13 it would end the Farmers to Families Food Box program at the end of May. That squelched hopes – and fears – surrounding the kind of government spending that propelled the cheese and Class III markets to unsustainable heights in 2020. Although the cheese markets staged a comeback April 16, they finished less than where they began the week. Chicago Mercantile Exchange spot Cheddar blocks decreased a nickel to $1.78 per pound. Barrels ultimately decreased just a quarter-cent to close at $1.69. Butter also weakened; spot butter decreased 3 cents to $1.85.

Demand for both cheese and butter remains strong as restaurants restock and retailers have yet to pull back. Americans spent $127.7 billion at restaurants and grocery stores in March, the greatest total on record. Grocers continue to record stellar sales; spending at restaurants is almost back to pre-pandemic levels. At some point consumers will reduce grocery purchases as restaurant visits become more routine and their pantry shelves grow heavy. But for now both food sectors are pushing product at a good clip. 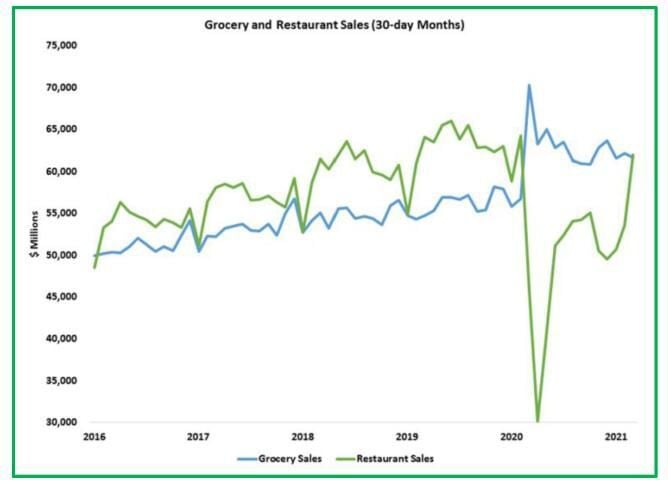 The protein powders continued to improve. CME spot nonfat-dry milk added a penny to reach a fresh 14-month best at $1.215. Spot whey increased 4.5 cents to 67.5 cents, its best price on record. Although the spring flush is in full swing, driers are running at less than capacity in the Great Lakes states; a new cheese plant is using a greater share of the regional milk supply. Both domestic and export demand are strong, but logistics issues have slowed some sales. The container shortage and port backlogs add to the cost of freight and delay deliveries. Although U.S. milk powder is priced to move, freight issues are likely trimming sales – and prices – at the margin. But tightening milk-powder stocks in Oceania and reduced output in Europe suggest the United States will continue to fare well in foreign markets.

European milk collections were just shy of 27 billion pounds in February, assuming steady milk-production trends in Sweden. Adjusted for leap day, that’s 0.4 percent less than in February 2020, following a 0.7 percent shortfall in January. Output decreased to less than year-ago levels in all the major dairy nations except the United Kingdom, Italy and Ireland. Polish milk collections were 0.3 percent less than in February 2020, a rare decline for one of Europe’s most consistent sources of growth. Reduced European milk output helped to offset about 40 percent of the growth in U.S. milk production in the first two months of the year. 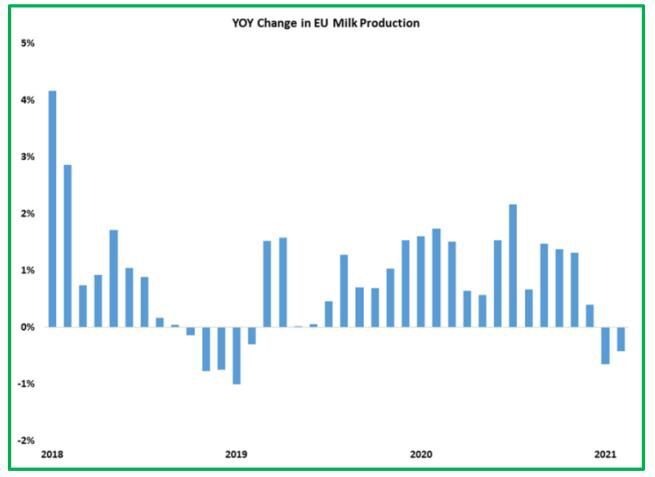 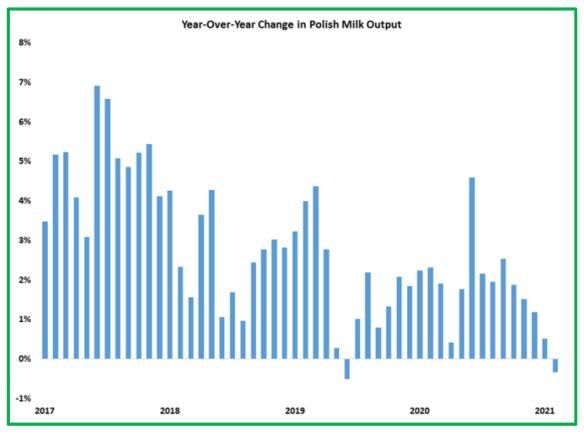 U.S. milk output remains strong, but expenses are increasing. Feed costs are starting to bite, especially in the West where dairy producers must pay unusually steep freight rates in addition to already inflated grain and protein prices. Regional drought and scarce inventories compound the Western feed shortage and increase the cost of milk production noticeably. Pricey inputs will weigh on milk output eventually. But given the massive milk-cow herd and relatively small slaughter rates, milk production is likely to remain formidable in the near term. Fortunately for dairy producers, strong demand has supported dairy-product values. 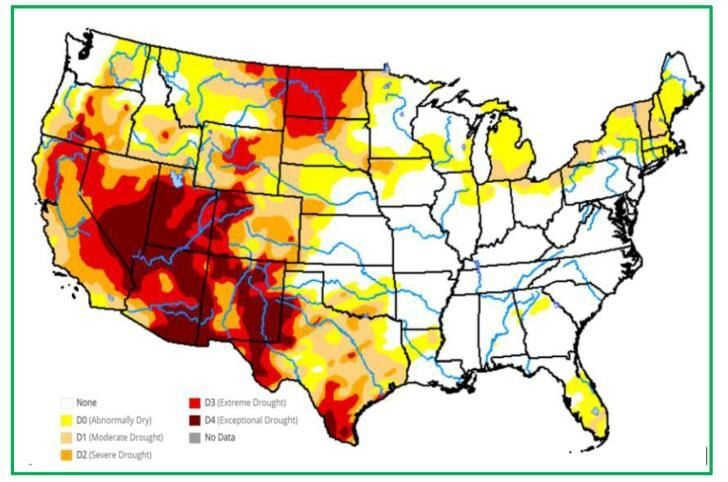 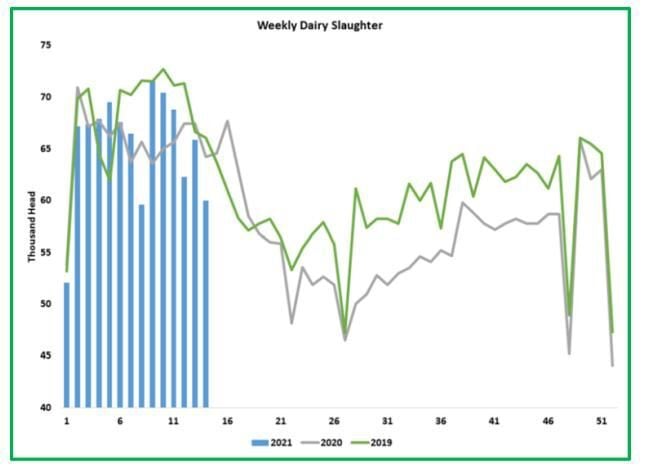 May corn futures were more than $6 per bushel this past week for the first time since 2013, when the industry struggled to rebuild inventories after the devastating 2012 drought. Aside from concerns that it’s a bit too dry in Brazil, there are no serious crop issues to fuel this year’s rally. But demand is formidable. Livestock numbers have increased, and drought in the West will push cattle out of grasslands into feedlots. Exports are booming. May corn settled at $5.855 this past Friday, an increase of another 8.25 cents from the previous week. December corn finished at $5.1225, 14 cents more than the previous Friday. May soybeans increased more than 30 cents to $14.3325. May soybean meal finished $1 more, at $402.20 per ton.

During the past decade U.S. milk production has increased by an average annual growth rate of 1.5 percent while domestic demand has increased …