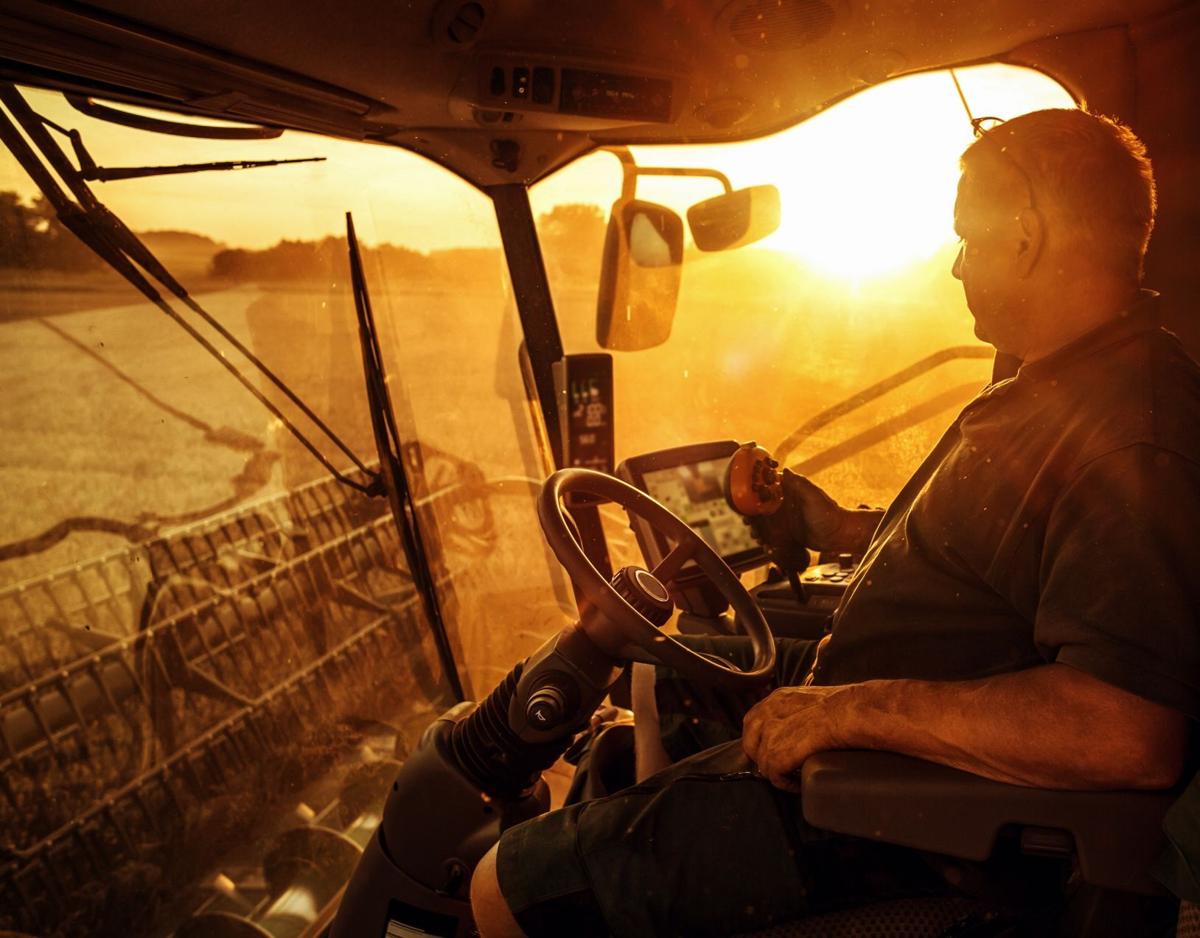 Producers are more optimistic about the 2022 season.

For only the second time since May 2021, the Ag Economy Barometer increased in December 2021. The index climbed to a reading of 125; that’s 9 points better than in November. Both the Index of Current Conditions and the Index of Future Expectations increased in December, with the increase in the barometer attributable mostly to an improved perspective on current conditions in the agricultural sector.

The Purdue University-CME Group Ag Economy Barometer sentiment index is calculated each month from 400 U.S. agricultural-producer responses to a telephone survey. This survey was conducted Dec. 8-14, 2021. 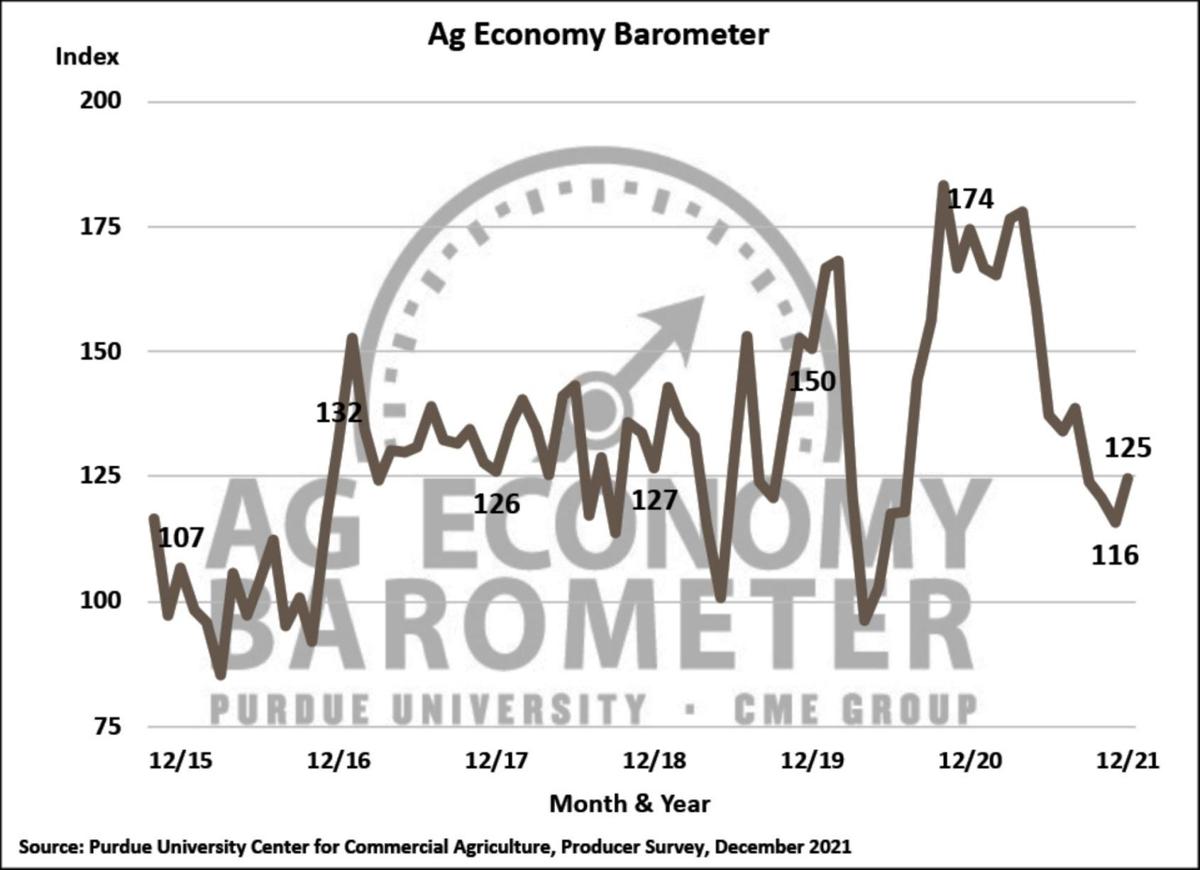 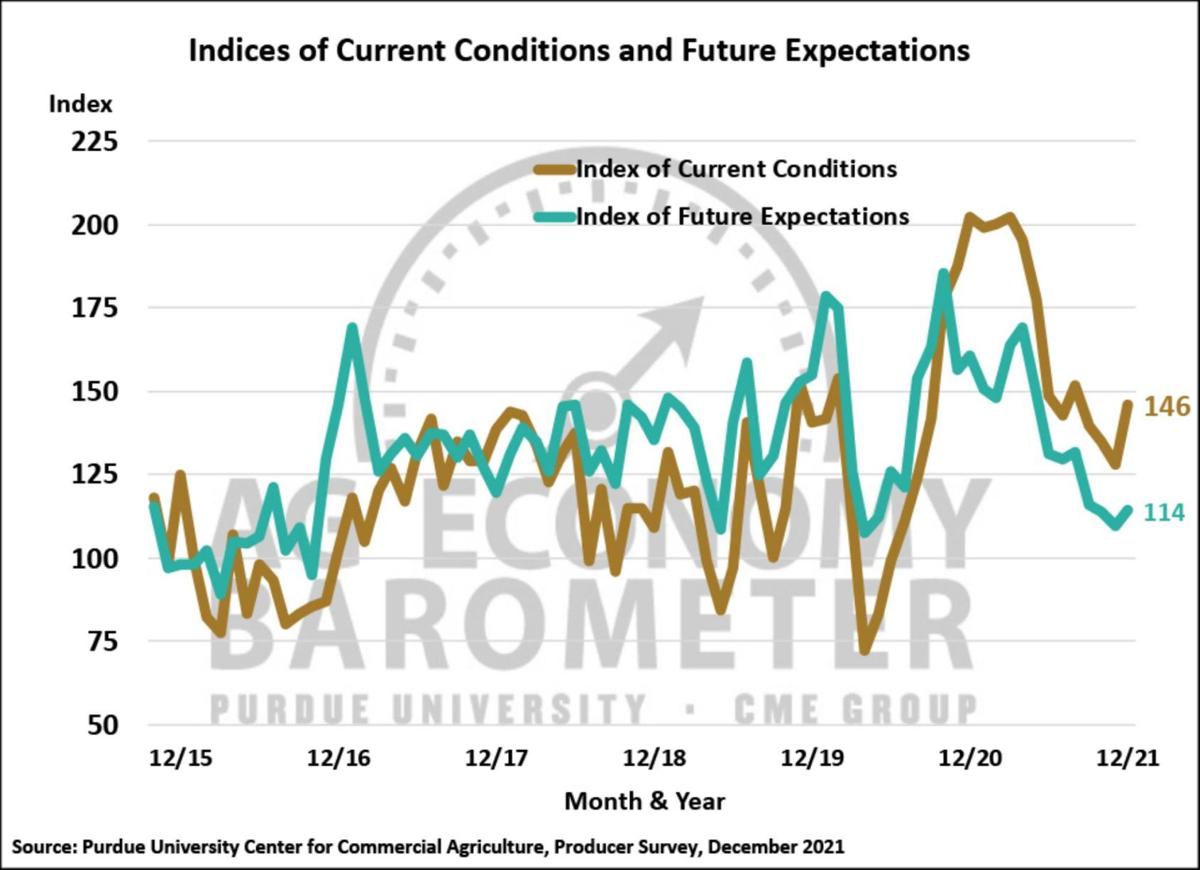 The Farm Financial Performance Index increased 7 points to 113 in December, which is the index’s best reading since May. December marked the second month in a row that farmers reported a stronger financial performance for their farms. The increase leaves the financial index just 3 points less than its year-ago level and caps an increase of 18 percent since the index bottomed out back in June.

Crop producers taking stock of relatively strong financial performance on their farms in 2021 as the year wound down likely explains the increase in the financial index. Unlike the barometer, this month’s Farm Financial Performance Index was markedly stronger than readings obtained just before the pandemic’s onset. For example two years ago the financial index stood at 89; that’s 21 percent less than this month’s reading. 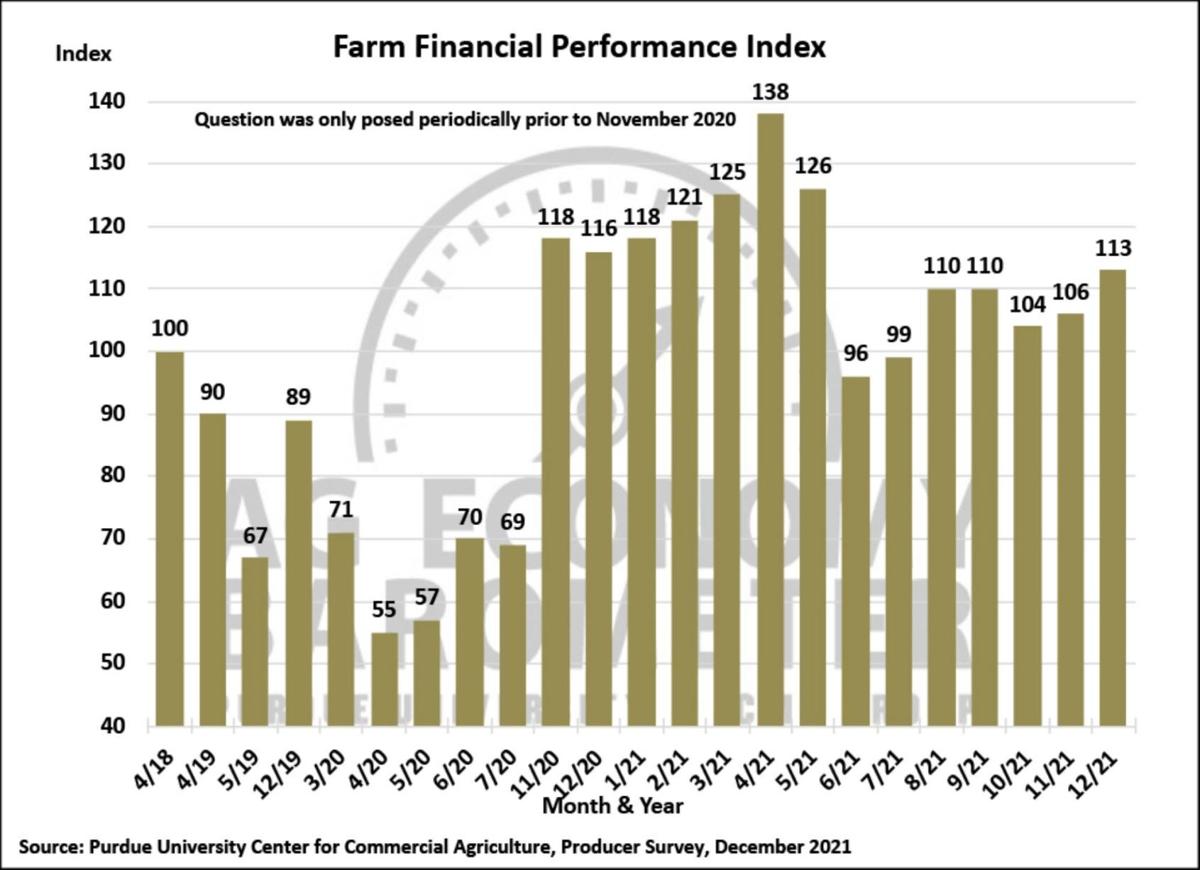 For just the third time in 2021, the Farm Capital Investment Index increased in December. The index climbed 10 points to a reading of 49, the most positive value for the investment index since August. But it was still 47 percent less than in December 2020. The investment index’s improvement was primarily the result of fewer producers saying now is a bad time to make large investments in buildings and machinery. When asked more specifically about farm-machinery and construction plans, fewer producers this month said they plan to reduce machinery purchases in the upcoming year, responding instead that they plan to hold investments steady with the prior year. But compared to responses recorded in November, a larger number of producers this month said they plan to reduce their investments in farm buildings and grain bins vs. a year earlier. Supply-chain issues continue to hamper producer capital-investment plans. This month 45 percent of survey participants said that reduced farm-machinery-inventory levels impacted their farm-machinery purchase plans. 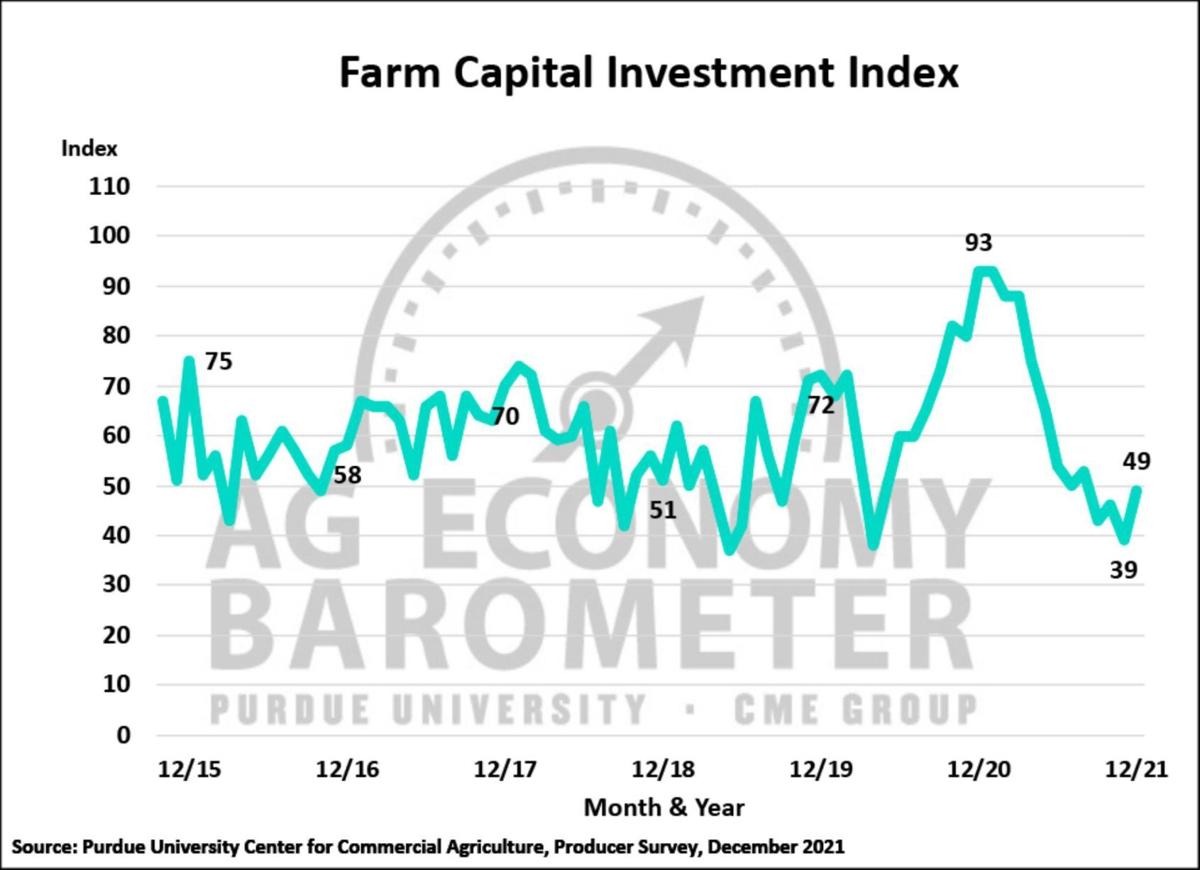 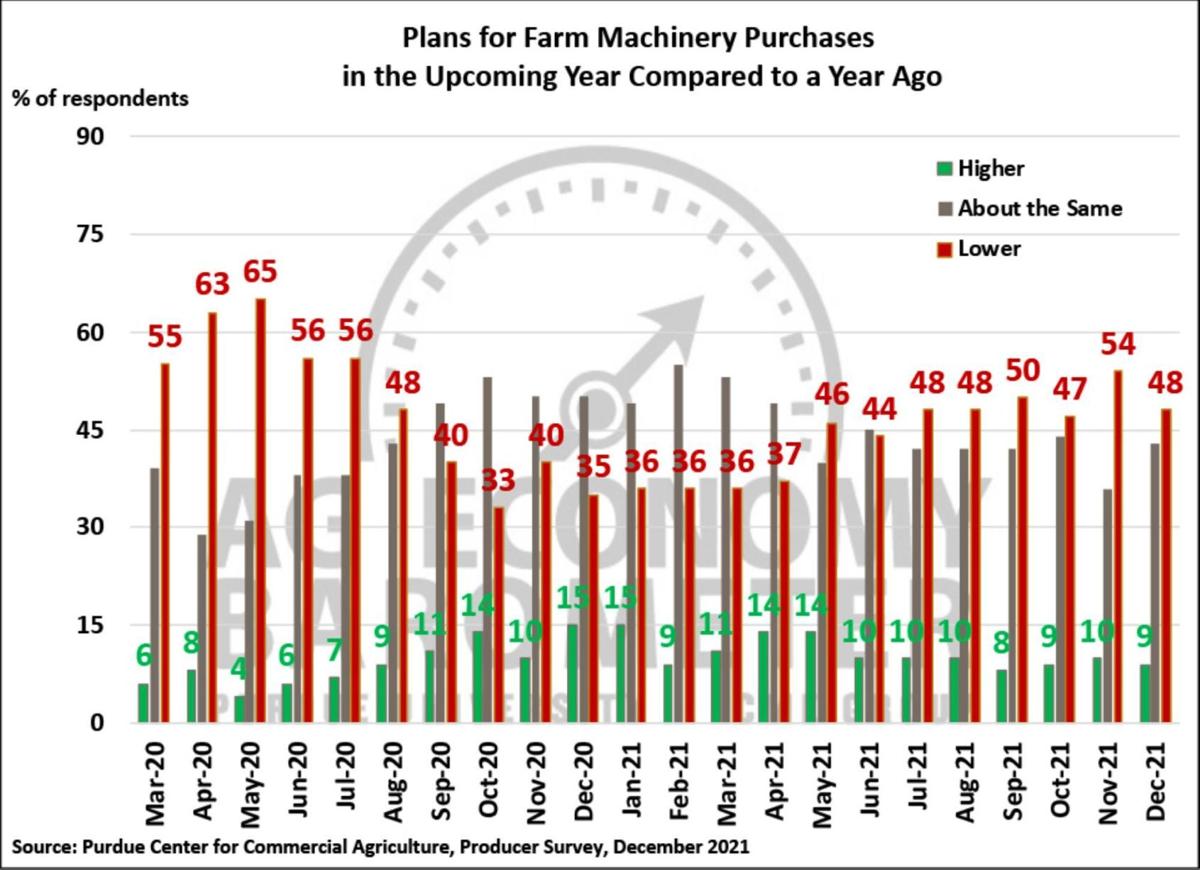 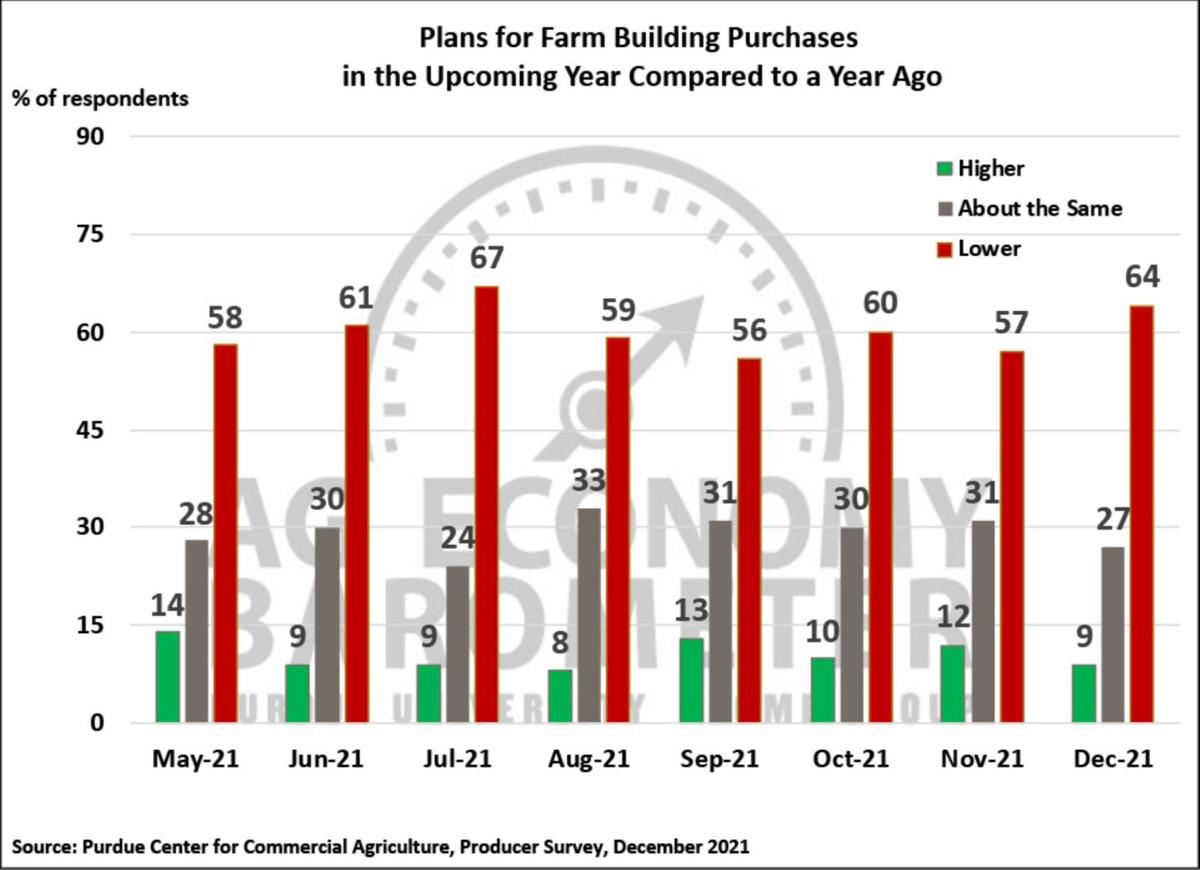 Farmers are very concerned about increasing production costs and the availability of production inputs. When asked what their biggest concerns are for their farming operations in the upcoming year, increased input cost was overwhelmingly the top choice, with 47 percent of respondents choosing it from a list that included reduced crop and-or livestock prices, environmental policy, farm policy, climate policy and COVID’s impact. In this month’s survey more than half at 57 percent of producers said they expect farm-input prices in the upcoming year to increase by more than 20 percent compared to a year earlier. Almost four out of 10 respondents said they expect input prices to increase by more than 30 percent.

This month’s survey also asked crop producers if they have had any difficulty purchasing crop inputs from their suppliers for the 2022 crop season. Almost four out of 10 at 39 percent of respondents said they’ve experienced some difficulties. In a follow-up question, producers experiencing difficulties making purchases were asked which crop inputs they’ve had trouble purchasing. Responses were quite varied, indicating there are problems across the supply chain.

Despite concerns about both the increasing cost and availability of inputs, about half of corn-soybean growers said they expect farmland cash-rental rates to increase in 2022 compared to 2021. 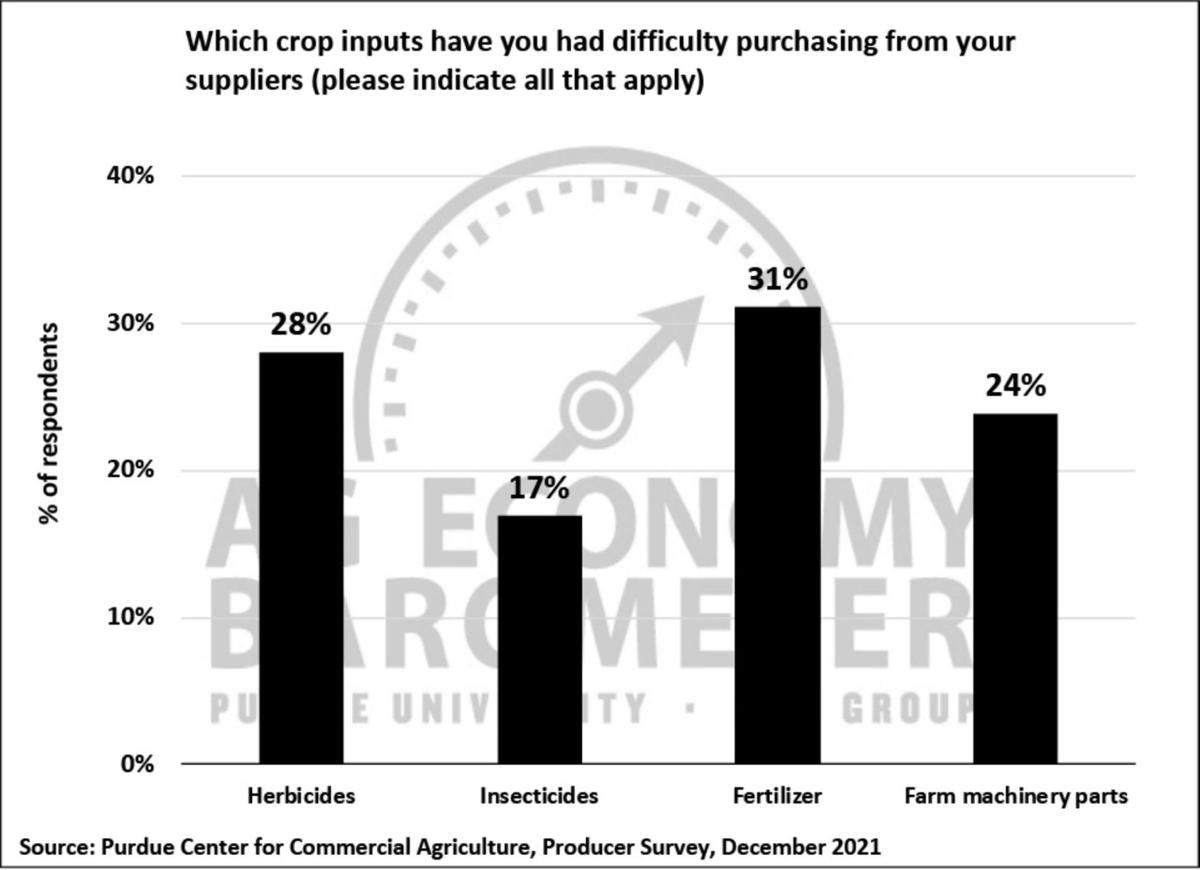 Both short-term and long-term farmland-value indices declined slightly in December. The Short-Term Farmland Value Expectation Index declined 4 points to 153, while the long-term index declined 6 points to 152. Although both indices declined in December, they remain near their all-time best values. Farmland values, especially in the Corn Belt, have increased sharply during the past year.

Iowa State University’s farmland-value survey recently reported that the average farmland value in Iowa increased 29 percent from November 2020 to November 2021. The fact that values have climbed dramatically in recent months could be leading some producers to question whether or not values will continue increasing. This month’s survey included a follow-up question to producers who indicated they expect farmland values to increase during the next five years, asking them for the main reason they expect farmland values to increase. By far the most common response from producers in the survey was non-farm investor demand at 61 percent, followed by reduced interest rates at 13 percent and strong farm-cash flows at 11 percent. Of those responding, 14 percent indicated another factor not listed on the survey was their primary reason for expecting values to increase. 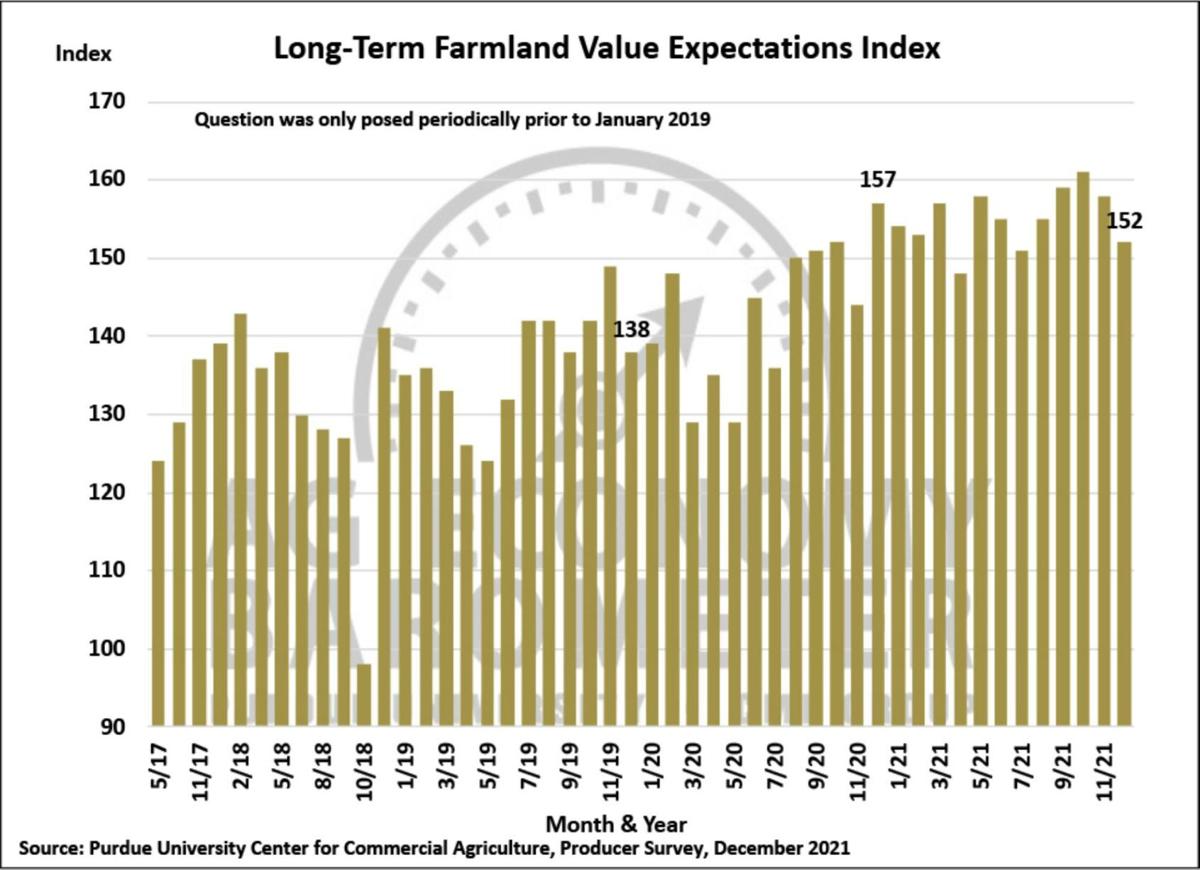 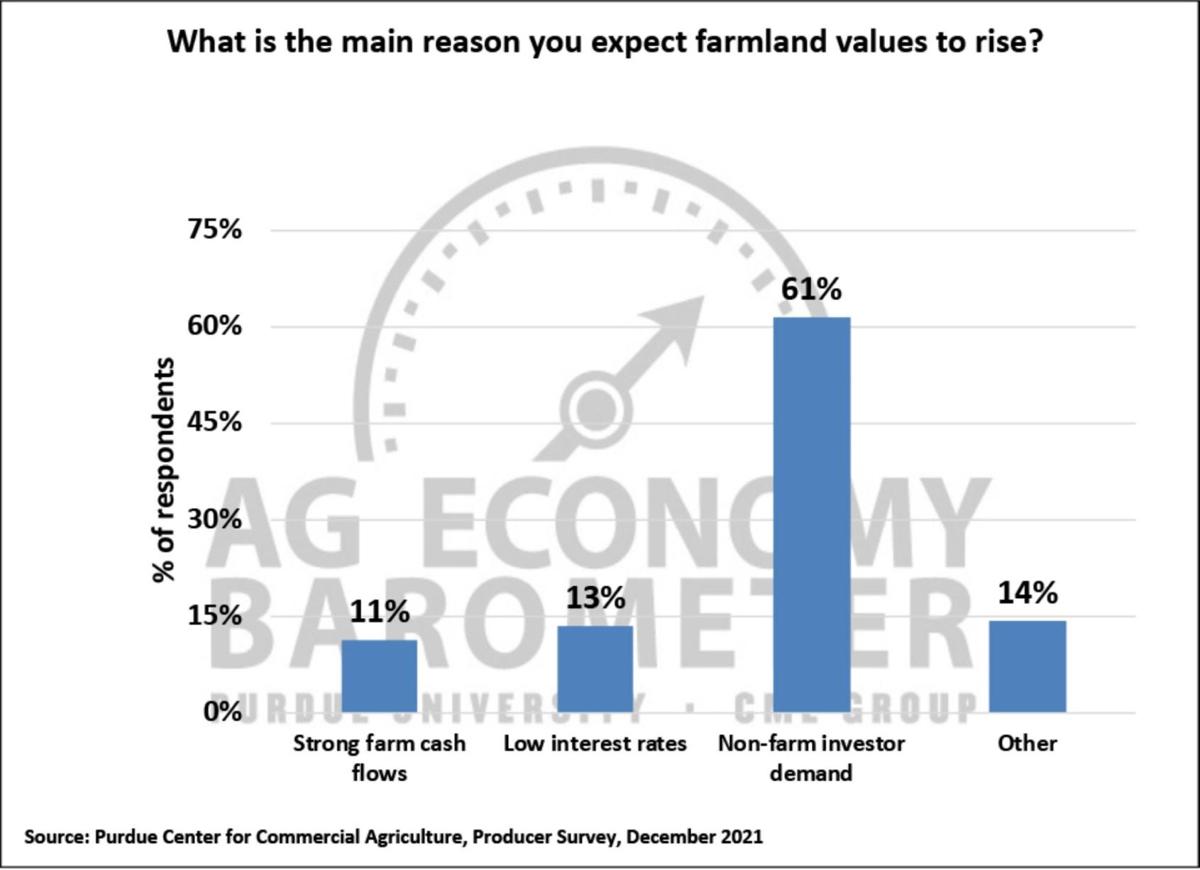 The Ag Economy Barometer increased 9 points in December, marking just the second increase in the overall-sentiment index since May. Both the Index of Current Conditions and the Index of Future Expectations increased in December, with a stronger current-conditions index primarily responsible for the barometer’s increase. Producers’ improved perspective on farms’ financial position appeared to be the primary driver of the sentiment improvement; the Farm Financial Performance Index climbed 7 points this month. Unlike other measures of farmer sentiment, the financial-performance index in December 2021 was more than it was before the pandemic’s onset. Agricultural producers are concerned about increasing input costs, with almost half at 47 percent of producers choosing it as a top concern for 2022. More than four out of 10 respondents said they expect farm-input prices to increase by more than 30 percent in 2022 compared to 2021. Supply-chain issues continue to haunt the nation’s agricultural sector. Forty-five percent of respondents said that tight farm-machinery inventories impacted their machinery-purchase plans. And 39 percent of producers in this month’s survey said they’ve experienced difficulty in purchasing crop inputs for the 2022 crop season.

While Wisconsin ranks No. 13 in ag exports, a new state initiative sees room for improvement and allocates $5 million to grow exports by 25% within five years.

Producers are more optimistic about the 2022 season.