Farmers are optimistic but are facing stress and trade challenges.

Farmers are optimistic but are facing stress and trade challenges.

The Ag Economy Barometer drifted sideways in December, to a reading of 150 compared to 153 in November. Although the barometer changed little in December, there was a shift in producer perspective regarding both the farm and production-agriculture sector’s economic health.

Producers expressed less confidence than a month earlier about current economic conditions. The Index of Current Conditions registered a reading of 141, a decline of 12 points compared to November’s index value of 153.

In contrast producer expectations for the future remained strong as the Index of Future Expectations increased slightly to a reading of 155 compared to 153 a month earlier. This month’s Ag Economy Barometer survey was conducted from Dec. 9-13, 2019, and is based on responses from a nationwide survey of 400 agricultural producers. 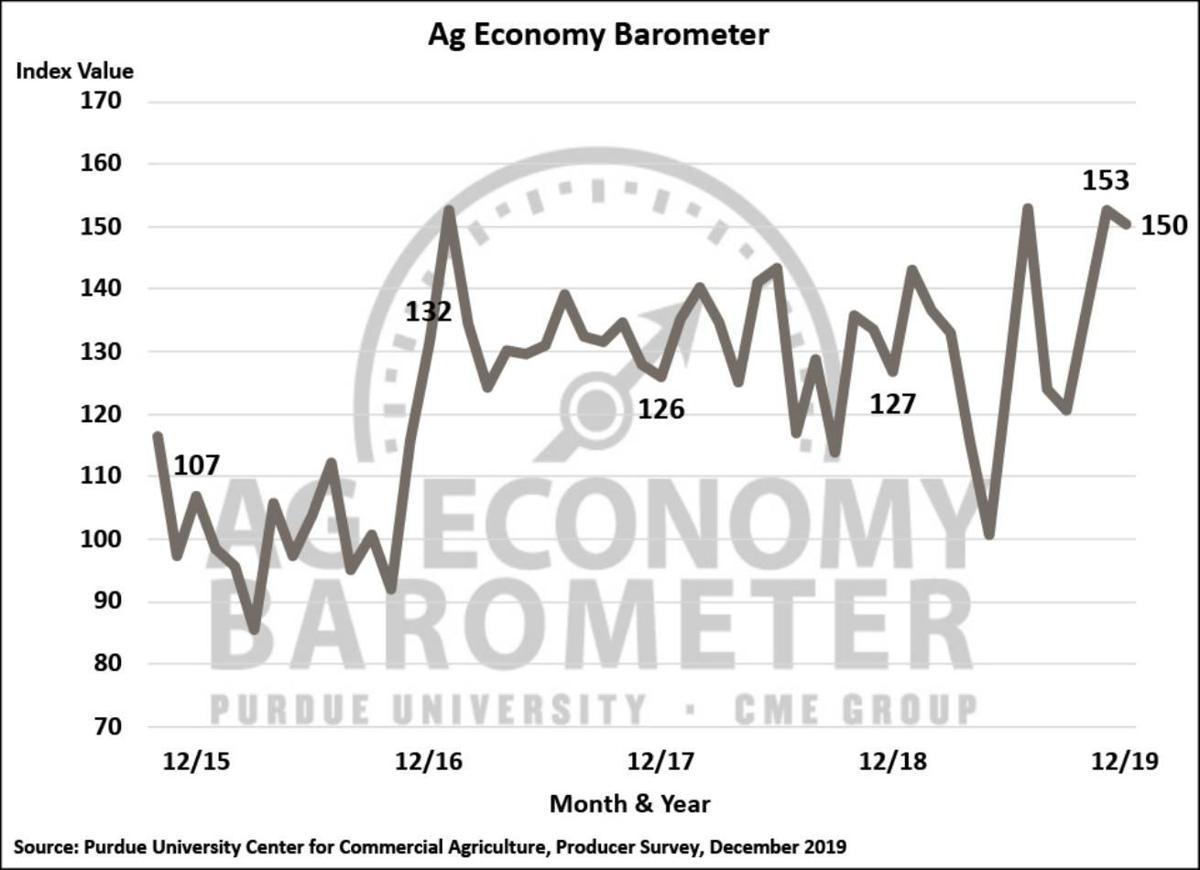 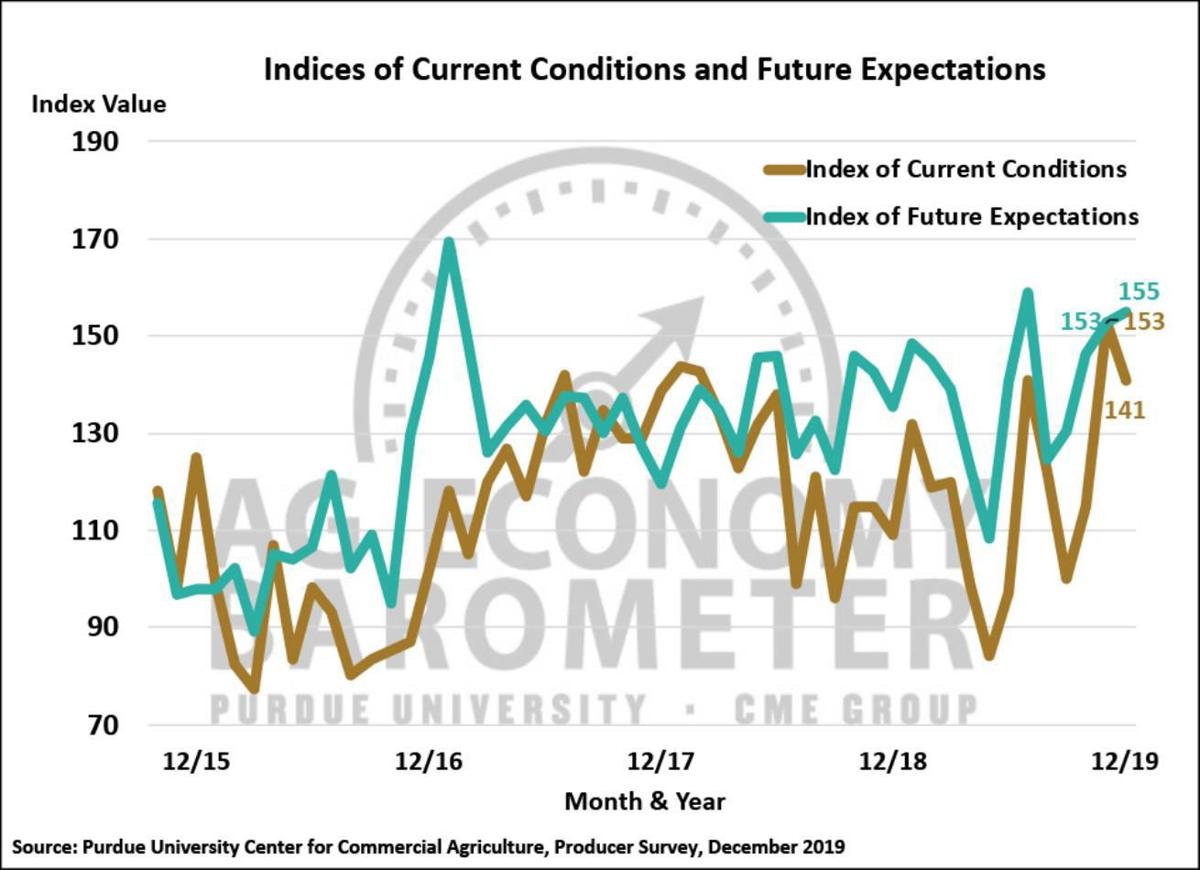 A slim majority at 52 percent of farmers on the December-barometer survey indicated the farm’s financial performance in 2019 matched initial budget projections. In the same survey three out of 10 producers said their farm financial performance was worse than expected at the outset of the year. That was partially offset by about two out of 10 – 19 percent – of respondents indicating performance was better than expected. The varied responses to the question are indicative of the variability in economic conditions among U.S. farm operations as 2019 came to a close.

We wanted to better assess the level of financial stress among U.S. farms. We asked producers in November and again in December whether they expected the farm operating loan in 2020 to be larger than, about the same or smaller than in 2019. We followed up with respondents who indicated they expect to have larger operating loans to learn why the size of the loan is likely to increase. About one out of five farms in our surveys – 19 percent to 21 percent – expect to have a larger operating loan in 2020 than in 2019. About three out of 10 of those farm operations – 29 percent to 30 percent – indicated the reason for larger operating loans is they expect to carryover unpaid operating debt from 2019 into 2020. Carrying over unpaid operating debt from one year to the next is a sign of financial stress. Responses to those two questions suggest that about 6 percent of farms surveyed in late 2019 were experiencing significant financial stress.

The Farm Capital Investment Index changed little in December compared to November, with an index reading of 72 – an increase of 1 point from a month earlier. December’s index value of 72 left the investment index at its greatest value for 2019. The investment index was quite volatile during 2019, recording 37 in May before recovering to December’s peak value. December’s reading suggested that despite the decline in the Index of Current Conditions, producer optimism was strong enough that farmers were more willing than a year ago to consider making large capital expenditures on farm machinery and buildings. A year ago the Farm Capital Investment Index stood at just 51. 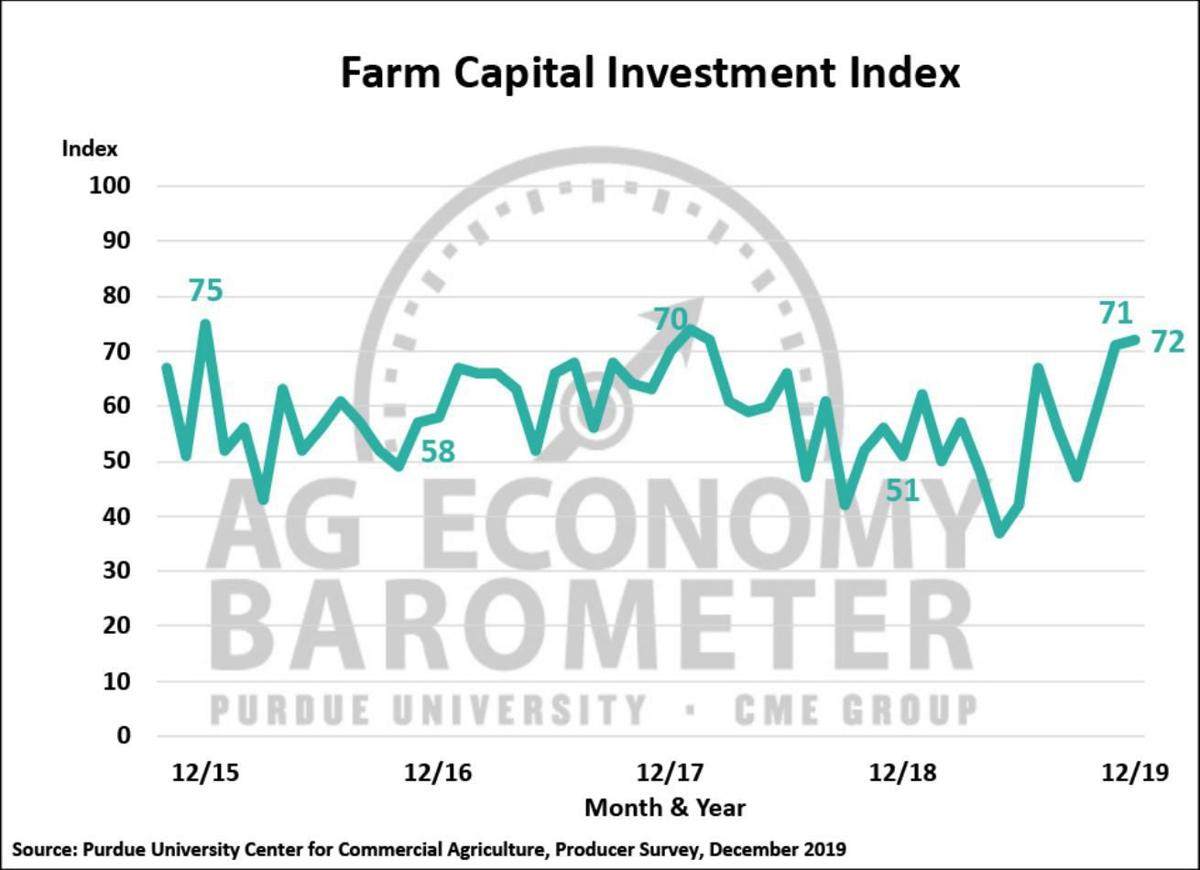 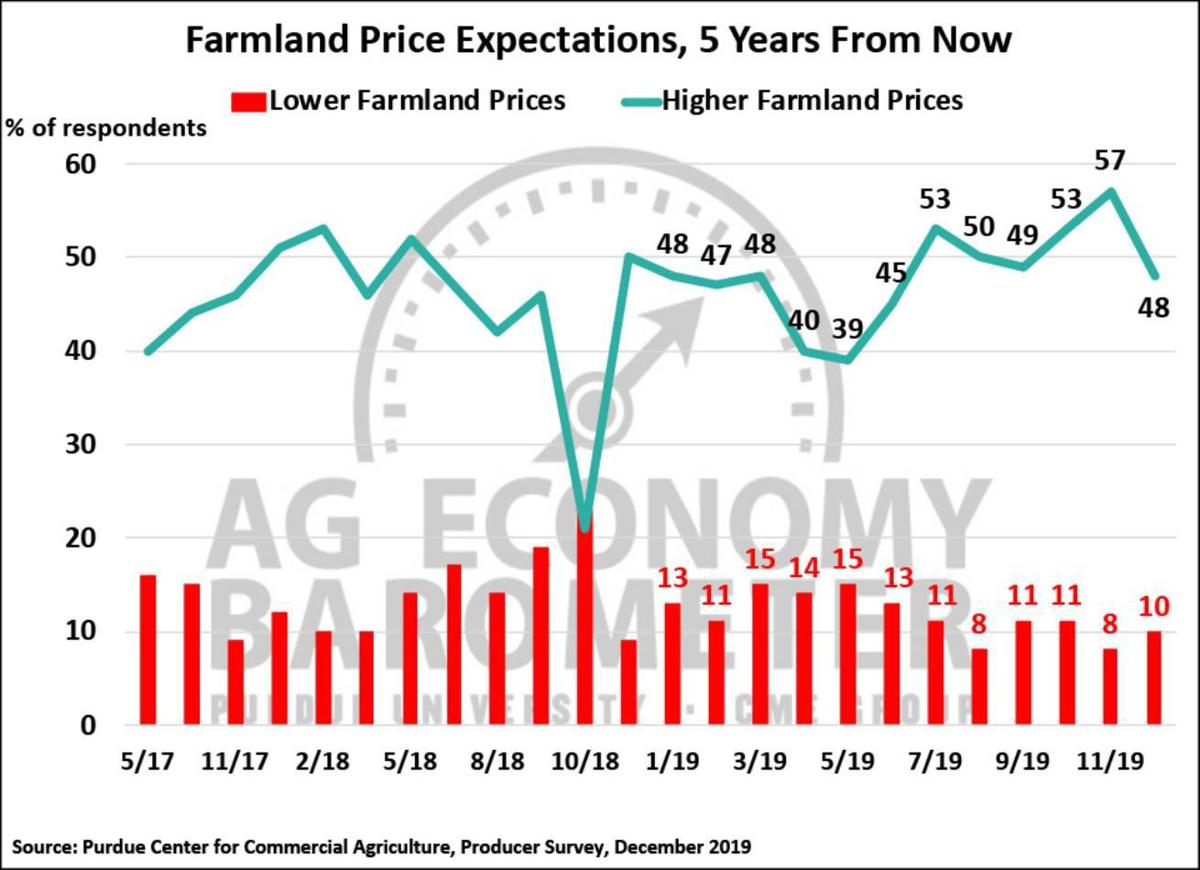 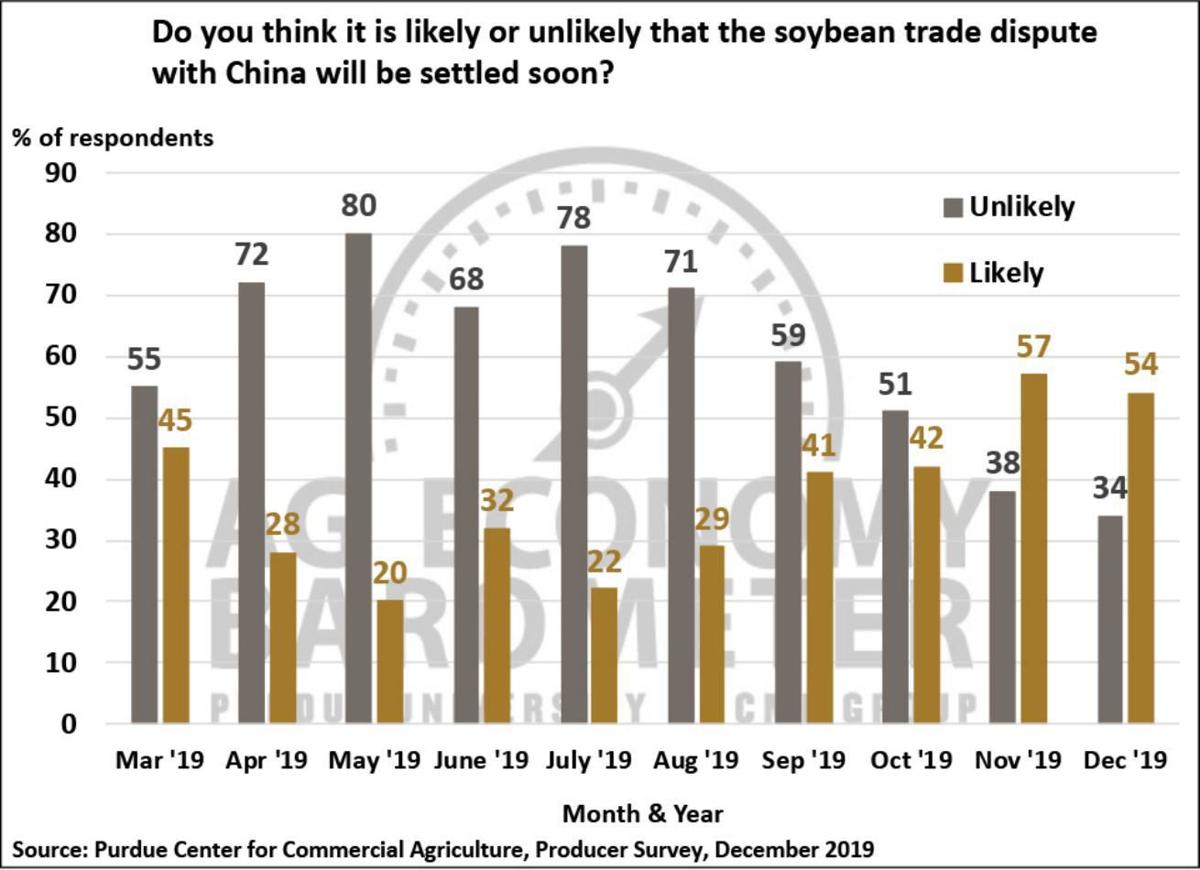 Farmer sentiment drifted sideways in December as the Ag Economy Barometer registered a reading of 150 compared to 153 in November. Agricultural producers in December were less optimistic about current economic conditions on their farms than a month earlier – but remained optimistic about future economic conditions. The Farm Capital Investment Index increased 1 point in December compared to November, leaving it at its best level of the year and well more than a year earlier.

Farmers continued to be much more optimistic about future farmland values than they were the previous spring, although they were somewhat less optimistic in December than they were in November. Compared to a year ago producers appear to be more confident that farmland cash-rental rates will remain unchanged in 2020.

Some farms are experiencing financial stress. About 6 percent of farms included in the December survey indicated they will have larger operating loans in 2020 because they expect to carryover unpaid operating debt from 2019 into 2020.

More than half the producers in our survey expect the trade dispute with China to be resolved soon. The percentage of farmers who expect the trade dispute to be resolved in a way that’s favorable to U.S. agriculture decreased in December from November. But it remained at more than 70 percent – as it has for all but two months since we first posed the question to producers in March 2019.