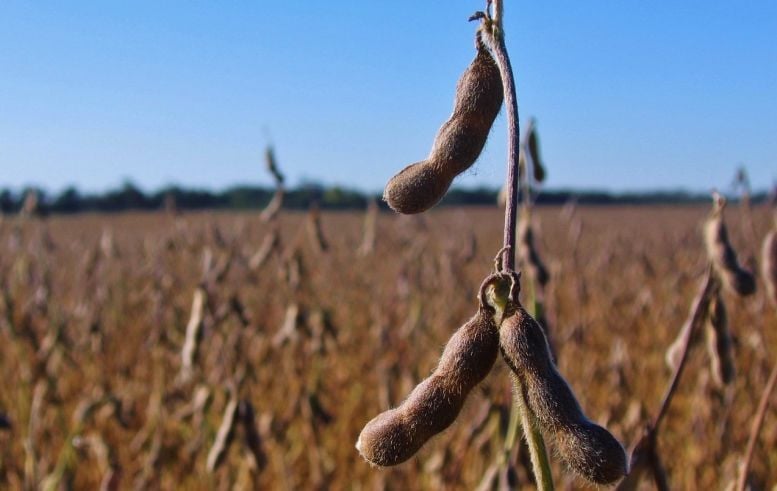 Soybean ending stocks for the 2019-2020 marketing year are reduced from 575 million bushels to 523 million bushels in the October World Agriculture Supply and Demand Estimates report.

Soybean ending stocks for the 2019-2020 marketing year are reduced from 575 million bushels to 523 million bushels in the October World Agriculture Supply and Demand Estimates report.

The U.S. Department of Agriculture released Sept. 30 its Quarterly Grain Stocks Report. It reduced old-crop corn and soybean inventory levels to well less than pre-report expectations, subsequently shocking the market to a sharp price rally. Adjustments were made Oct. 9 in the October World Agriculture Supply and Demand Estimates report to old-crop and new-crop supply and demand expectations.

The 1.9 billion bushels of corn ending stocks published in Sept. 20’s Grain Stocks report updates the 2020-2021 marketing-year supply picture. Moreover the USDA made changes to corn-planting and corn-harvested area, with planted areas decreasing 1 million acres from previous estimates. The USDA now pegs the 2020 corn area planted at 91 million acres, a reduction from the September estimate of 92 million acres – which was already a significant adjustment from the 97 million acres estimated earlier this year.

The USDA’s corn-production number is 14.7 billion bushels for 2020 as a result of the 1.5 million-acre change in estimated area harvested and a slightly reduced yield number – moving from 178.5 to 178.4. The overall 2020-2021 corn supply moves to 16.7 billion bushels, an increase of 5 percent from 2019. But it’s less than the 16.9-billion-bushel peak of 2016 and less than the past month’s World Agriculture Supply and Demand estimate.

But exports were left unchanged at 2.3 billion bushels, which is just less than the 2.4-billion-bushel corn-export peak in 2017. The resulting ending stocks after reduced supply and changes to demand result in 2.1 billion bushels estimated for the end of the 2020-2021 marketing year. That’s a significant downshift from where estimates sat earlier in April when 97 million acres were being estimated and ending stocks were quickly increasing to more than 3 billion bushels.

Hopes of a larger price rally will fall upon the need for corn demand to increase further. The USDA increased the average farm price from $3.50 per bushel in September to $3.60 per bushel. Figure 1 displays historic corn ending stocks with historic average farm price for corn, and the changes from the September World Agriculture Supply and Demand Estimates report to October’s report. 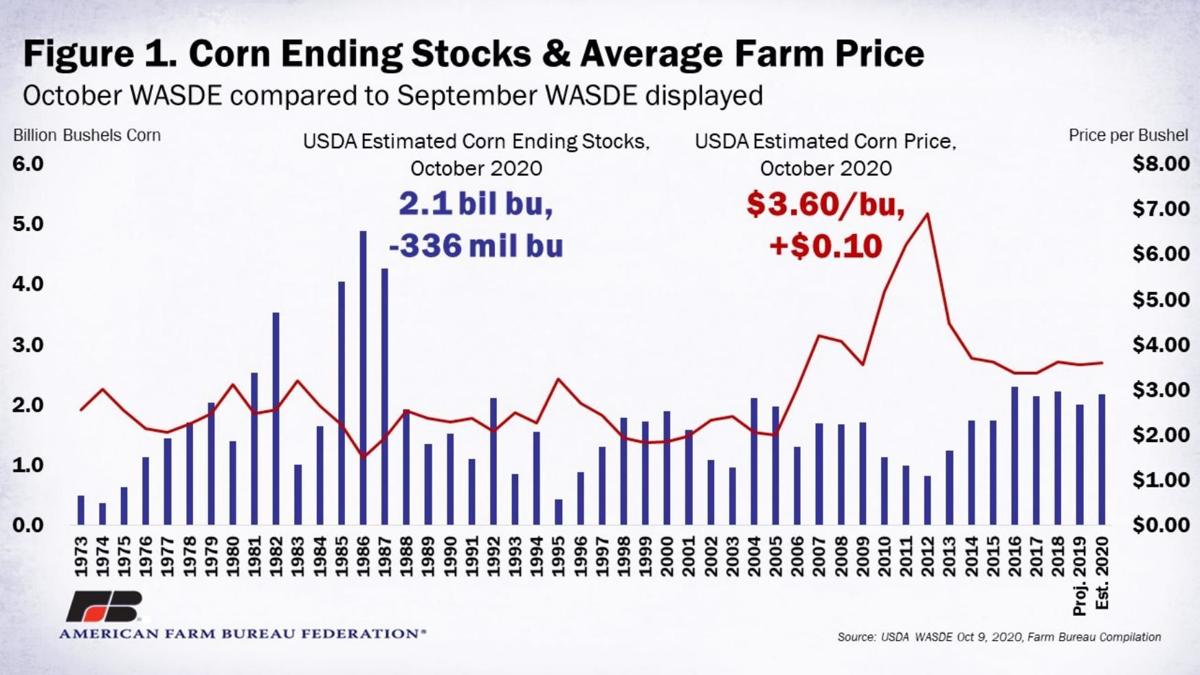 Good news is expected for the 2020-2021 soybean demand, with increased export estimates from 2.1 billion bushels in September to 2.2 billion bushels. That would be the largest on record if achieved. The smaller supply and increased demand from exports reduces ending stocks for 2020-2021 even more, to 290 million bushels. That’s a reduction of 170 million bushels from September and the smallest levels since the 2013-2014 marketing year. The 2020-2021 average farm price estimate for soybeans increased 55 cents, from $9.25 per bushel to $9.80 per bushel. Figure 2 shows historic soybean ending stocks with the soybean historic average farm price and the changes of the September World Agriculture Supply and Demand Estimates report compared to the October report. 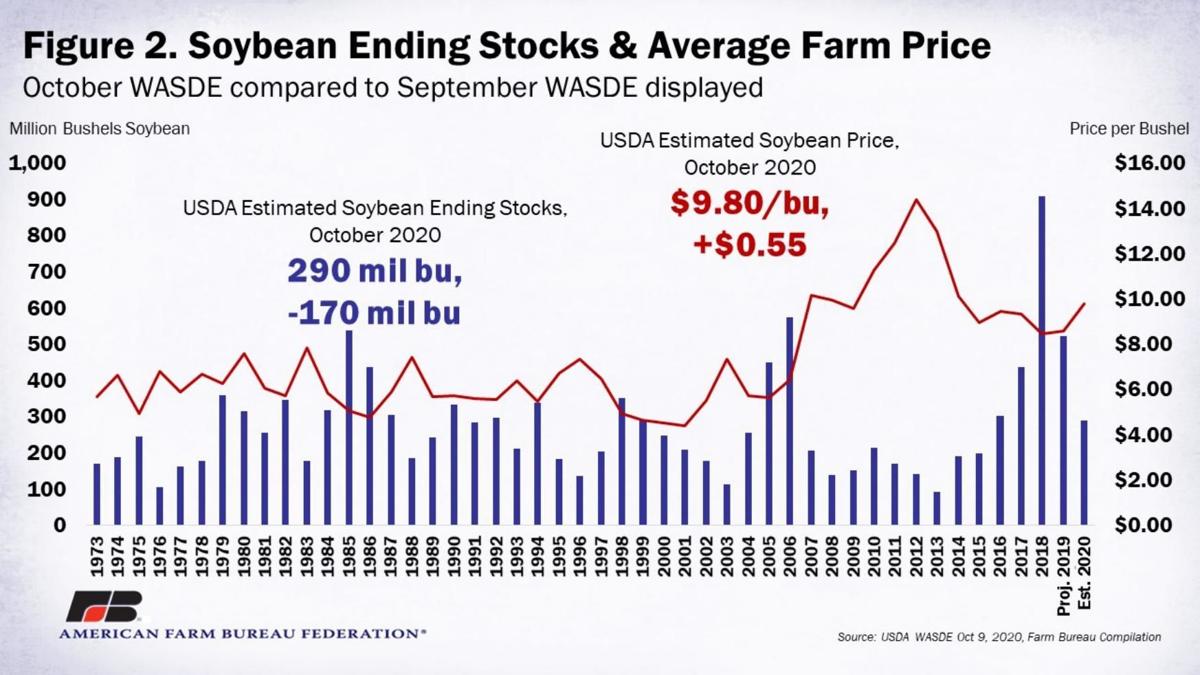 The USDA’s Quarterly Grain Stocks Report brought adjustments to the October World Agriculture Supply and Demand Estimates report, which made adjustments to demand. The markets reacted in a big way. Corn futures were already trading at better prices prior to the report’s release and made gains after the report. Soybean futures were increasing before the USDA released its report; futures kept climbing into contract best prices. The impacts of the adjustments made in those reports will continue to ripple through farm country. Unfortunately the reactionary price bumps came later than what would have been ideal for many farmers – especially those marketing the old crop in what ultimately was a tighter-than-expected supply environment. But the price rally is welcome news for those with bushels still to sell.

With harvest underway, farmers and analysts will keep their eyes on any potential yield changes that would impact supply – while renewed hope for demand increases in exports and ethanol corn use materialize.