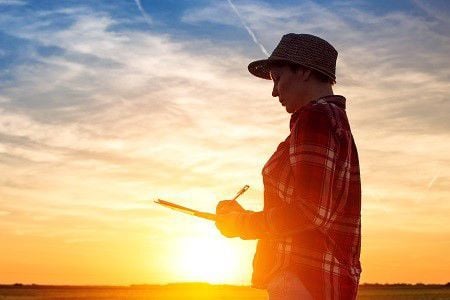 For many the best years of their career were quickly followed by the most challenging. Because of that the 2010-2019 decade will be discussed for generations to come.

“It was the best of times, it was the worst of times …” Charles Dickens, “A Tale of Two Cities”

While writing our recent 2019 Agricultural Year in Review we realized that more than the year was coming to a close. The decade – at least how most of us think about it – was also coming to a close. We think it’s helpful to reflect on what’s happened and what can be learned. With that we share the Agricultural Decade in Review – our list of the most important agricultural stories from 2010 to 2019.

Interest Rates Decrease: As global economies continued to respond to the impacts of the Great Recession, interest rates decreased. Farm-level interest rates in 2010 reached the most reduced level observed since the late-1980s. Ironically 2010’s welcomed step less would actually mark the greatest rates producers would see for the decade.

The Texas Drought: Fall-2010 dryness turned into a full-blown drought across the South and Southwest. The impacts were long felt, particularly for Texas cattle producers forced to sell their herds.

The Midwest Drought: The Corn Belt is caught in the crosshairs of a dry hot summer. The U.S. average corn yield of 134 bushels per acre was 35 bushels less than trend, a record in the data going back to the 1960s.

Commodity Price Better Again: Tight stocks and a record drought increased commodity prices even more. For the 2012 harvested crop, producers received an average price of $6.89 for corn, $14.40 for soybeans and $7.77 for wheat. These would be the greatest prices of the decade.

Net Farm Income Soars: With production recovering and prices strong, farm income soared in 2013. It would also mark the peak. The global acreage expansion stopped in 2013 – or at least paused.

The Farm Bill that Didn’t Happen: There was a lot of activity surrounding the farm bill, but it never crossed the finish line. The House and Senate each had their own versions, and efforts were eventually sent to a conference committee.

Farmland Values and Cash Rents Soar: The 2013 Purdue Farmland Survey found values were up about 20 percent across the state. Rental rates for excellent-quality farmland reached $294 per acre, and increase from $202 in 2010. With hindsight 2013 marked the peak for cash-rental rates of excellent-quality Indiana farmland.

Warning Signs in the Farm Economy: At the annual U.S. Department of Agriculture Outlook Conference, all eyes were on the shocking estimates that net farm income could decrease 25 percent for the year.

Uncertainty in Ethanol: A late-2013 decision by the U.S. Environmental Protection Agency to reconsider aspects of the Renewable Fuels Standard caused turmoil in 2014. The EPA initially proposed reducing the amount of ethanol blended but ultimately punted to 2015 for a final decision.

Big Crops: Ideal weather pushed U.S. corn and soybean yields to more than trend. As a result U.S. and global grain stockpiles increase, but are not as oversupplied as some suggested.

California Drought: California was gripped by a powerful drought.

GMOs on the ballot: Ballot measures to require the labeling of foods containing genetically modified organisms failed in Oregon and Colorado. From a 2012 ballot measure, Colorado started legally selling a new cash crop.

2014 Farm Bill Approved: The 2014 farm bill was approved, creating the Agriculture Risk Coverage and the Price Loss Coverage programs crop producers would then need to choose from. Sliding into the void between the end of direct payments in 2013 and Agriculture Risk Coverage and Price Loss Coverage payments starting in 2015, a large livestock-disaster bill was approved along with the 2014 farm bill.

Farmland values start to decline: The toll of reduced commodity prices and reduced farm incomes decreased farmland values. Excellent-quality farmland in Indiana went from $5,310 per acre in 2010 to a best price of $9,765 by 2014. By 2019 values would adjust to $8,206. Even with the adjustments, it was a decade of big changes in farm equity.

Merger Mania: Dow and DuPont announced they would merge and eventually split into three companies – Hello, Corteva. Monsanto tried it’s hardest to purchase Syngenta – in early May, June and again in August. Monsanto’s Climate Corp sold Precision Planting to John Deere. Of course the U.S. Department of Justice would intervene; AGCO finalized the purchase of Precision Planting in 2017.

WOTUS: The Obama administration issued the Clean Water Rules, which included Waters of the United States.

Buzz Word of the Year: Drones

Soybeans to the Rescue: A short South American crop send soybean futures to better prices late in the spring. The 2016 marketing-year average price for soybeans was $9.47 per bushel, an increase from $8.95 in 2015.

Wheat Implodes: Cash prices decrease so much that farmers collect loan-deficiency payments, and the long trend toward fewer wheat acres turns to a free-fall as the United States planted 4.5 million fewer acres in 2016 – a decline matched again in 2017. The marketing-year average wheat price was $3.89 – the worst price of the decade.

Corn Prices Decrease: The marketing-year average corn price fell to $3.36 per bushel, tied for the worst price of the decade. Prices hit $3.36 again in 2017.

The 2016 Election Proves to be a Surprise.

Another Big Year of Crop Production: Twitter posts and pictures to the contrary, U.S. corn and soybean yields go to more than trend for the fourth year in a row.

U.S. Beef to China: U.S. beef found its way into Chinese grocery stores in 2017 – but Chinese consumers weren’t too excited.

Tax Reform: Late in 2017 the president and Congress moved to reduce taxes.

Buzz Word of the Year: Bitcoin

Trade War: China imposed retaliatory tariffs in July on U.S. soybeans. As 2018 came to a close, a December truce gave hope for an early-2019 resolution.

USMCA: In November the leaders of Canada, Mexico and the United States announced an agreement to update the North American Free Trade Agreement with the U.S.-Mexico-Canada trade agreement. Ratification by all three nations, including Congressional Approval in the United States, would be necessary.

Ethanol Good News, Bad News: It was a mixed year for ethanol. On one hand Trump directed the EPA to allow year-round sales of E15 – theoretically increasing the potential market for ethanol sales. On the other hand the EPA granted several small-refinery waivers – effectively bypassing the Renewable Fuel Standard mandates.

Trade War Continues: 2018’s 90-day truce came and went with no deal. Again in 2019, optimism soared at year-end with rumors and Tweets of an imminent “Phase 1” deal. Market Facilitation Program payments were made again in 2019; direct payments accounted for a larger share of farm income.

U.S. Grain Production Hiccups: It started with 20 million acres of prevented planting. Then corn and soybean yields were less than trend, the first time in five years. Many wondered why prices didn’t increase, but it’s worth considering just how bad conditions could have been.

USMCA Progress: The House of Representatives passed legislation to ratify the 2018 negotiated U.S.-Mexico-Canada trade agreement bill. The Senate might finalize the deal in the next decade.

Difficult Year for USDA Staff: The USDA’s cost-cutting plan to relocate more than 500 employees out of Washington, D.C., came to fruition with a move to Kansas City. Rather than moving, most of the impacted employees quit. A USDA employee also faced threats of harm during a crop tour – a difficult year for often-underappreciated public servants.

Move Over Beef: Meat-industry disruptors Impossible Food and Beyond Meat had a big year. The former had Burger King take its product nationwide; the later went public.

The dichotomy of the past decade is quite stark. The first several years centered around production shortcomings and the difficulty of meeting strong demand. It was common to hear pondering about feeding 9 billion people by 2050. But most recently the challenges have been almost the opposite – large yields, burdensome endings stocks, weak commodity prices and farm incomes, and concerns about too-little demand for ag products – from trade, diseases and disruption.

For many the best years of their career were quickly followed by the most challenging. Because of that the 2010-2019 decade will be discussed for generations to come.

Without a doubt the next decade will have its own set of challenges, uncertainties and opportunities. We wish you and yours all the best.