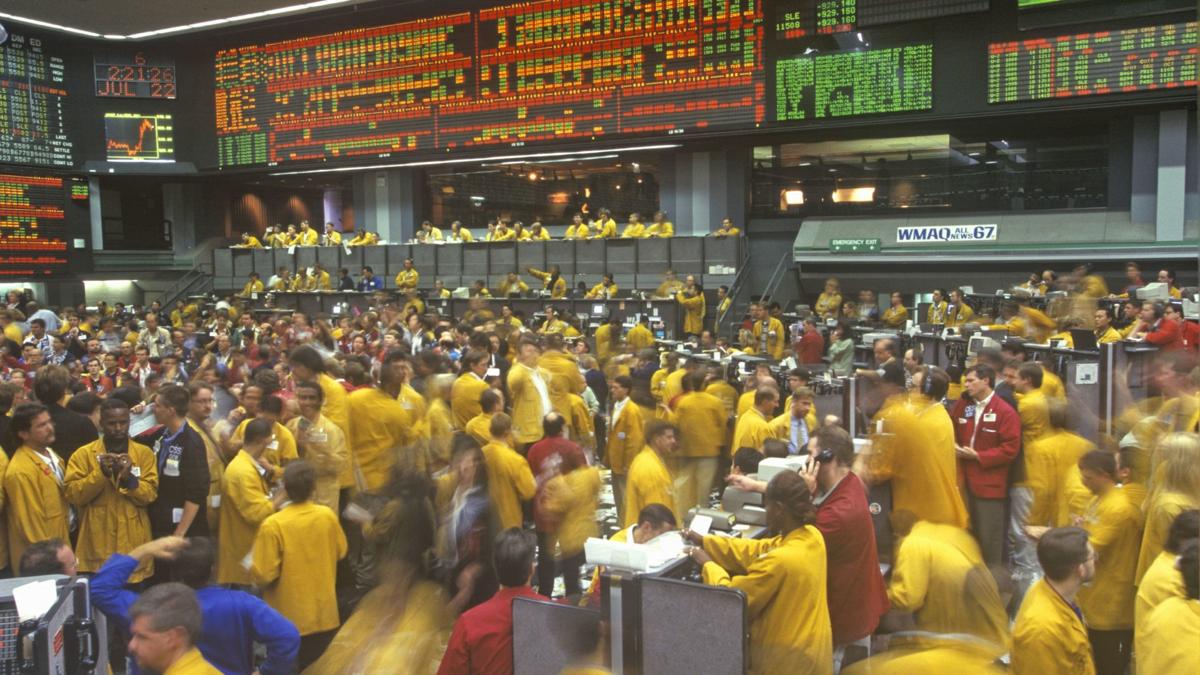 This past week was the worst week on Wall Street since 2008. Major indices suffered their largest daily losses since Black Monday in 1987. At the closing bell this past Friday the S&P 500 Index settled 8.7 percent less than the previous Friday.

Oil futures plummeted more than 23 percent. Saudi Arabia and Russia are in a lose-lose faceoff. Both have abandoned oil-production cuts and are now boosting output with abandon. They’re in a bidding war for a larger share of a shrinking market. 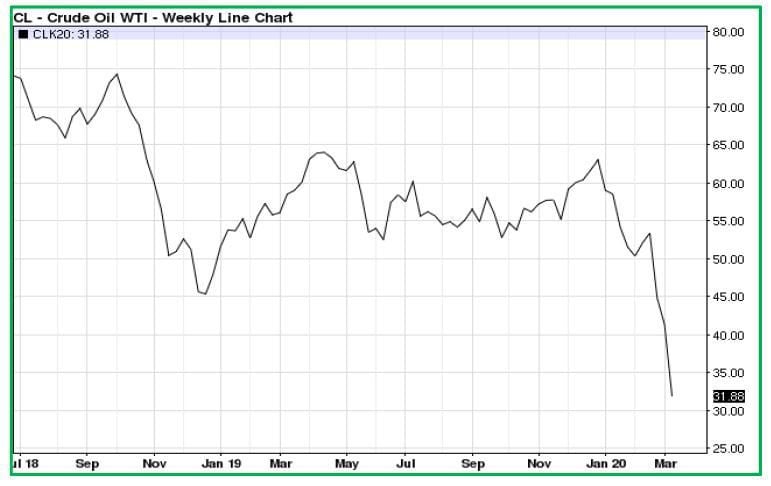 Plunging stocks, cheap oil and a strong dollar would normally spell disaster in the dairy markets. And indeed there was a lot of red ink on LaSalle Street in Chicago, but the damage was not nearly as extreme as feared. Losses in April through December Class III futures ranged from 13 cents to 50 cents, posting declines of between 0.8 percent and 3.1 percent, respectively. Class IV fared far worse, with most contracts 60 cents or 70 cents in the red. April through December Class IV contracts suffered an average decline of 4 percent this past week. The April and May contracts settled at a disappointing $14.75 per hundredweight. Nearby contracts, which will most quickly translate into dairy-producer milk checks, were the most resilient. March Class III futures slipped just 3 cents to $16.34, and April closed at $15.90, a decrease 13 cents this past week. At $15.11, March Class IV futures settled 44 cents less than the previous Friday.

CME spot butter gave back some of its recent gains, slipping to $1.8125 per pound. That’s 4.25 cents less than the previous Friday, but well more than the trading range for much of the past month. Butter demand is increasing, as befits the season. Retailers have stocked up on butter and they are advertising frequently to keep product moving. Due to the coronavirus Covid-19 butter makers expect to lose sales from food service and restauranteurs while retail demand climbs. 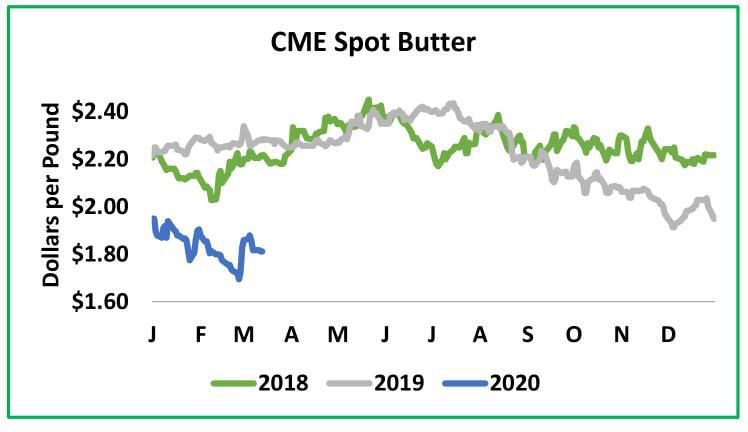 Unlike butter, spot nonfat-dry milk is weighed down by both the virus and the calendar. Driers are running hard and the spring flush is accelerating. As consumers stock up on pantry items, increased packaged-food sales could boost demand for domestic milk powder eventually. But export sales have slowed and logistics are a major hurdle even for those export sales that are on the books. Buyers are ordering only enough to meet immediate needs and are mostly watching from the sidelines to see how far prices will decrease. This past week Chicago Mercantile Exchange spot nonfat-dry milk slipped 6.25 cents to $1.0525, a six-month worst price. Still the world’s milk-powder stocks are far from burdensome, and milk-powder prices stand about a dime better than they were a year ago. 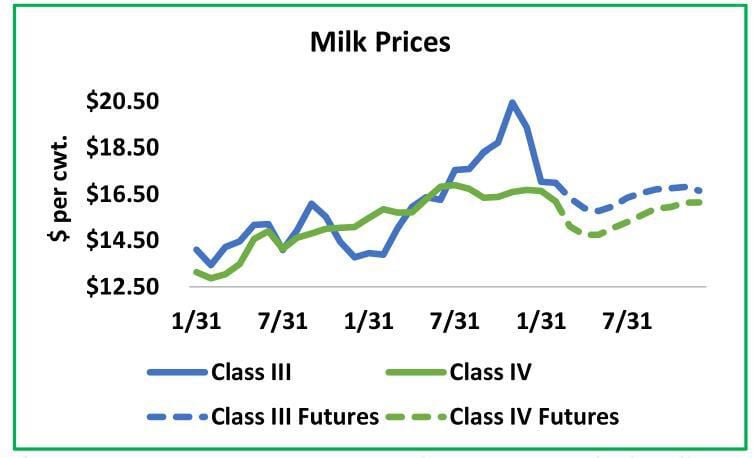 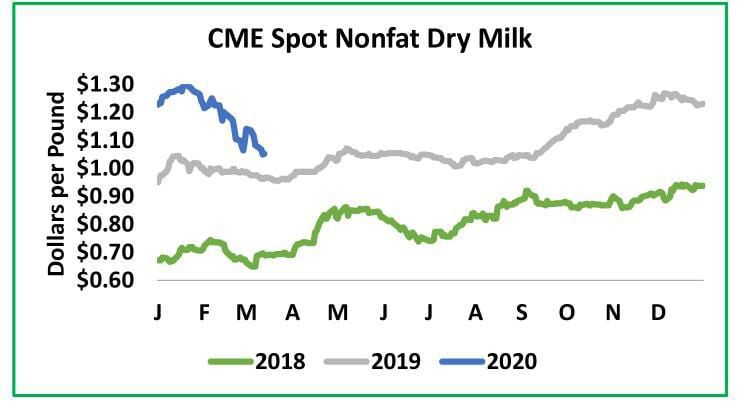 The Class III markets had a relatively good week, all things considered. CME spot whey powder went nowhere at all; it closed once again at 34.75 cents per pound. That’s a victory when most other markets suffered a complete rout. Amazingly CME spot Cheddar managed to gain ground this past week. Blocks increased an impressive 12.25 cents to $1.8725. Barrels increased 2.25 cents to $1.50. Cheese demand has so far thrived amidst Covid-19. Pizza sales are going strong, with consumers preferring foods they can pick up or have delivered. And the grocery rush favors cheese as well. Retailers are hurrying to restock as the shelves are quickly emptied. Cheese is packed with protein and calcium, and offers a long shelf life in a convenient package. Consumers love it. A surge in retail sales is starting to tighten fresh supplies, as evidenced by the spot market. The uptick may be temporary, but it’s having an impact. 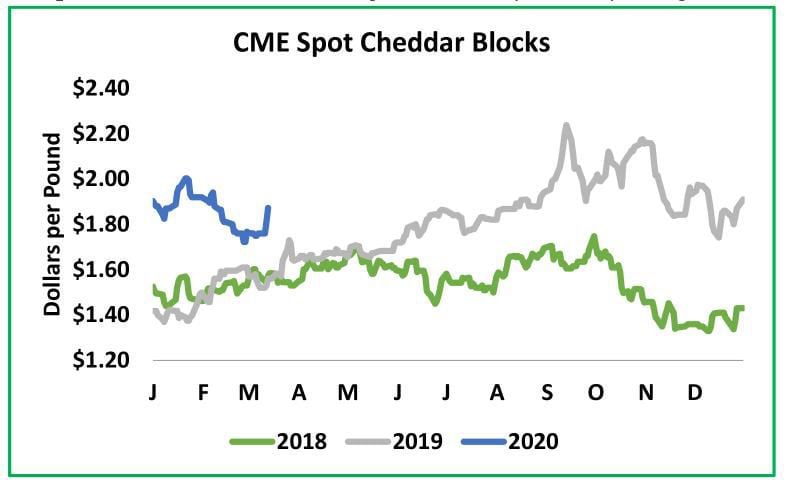 Around the nation conferences, concerts and sporting events have been cancelled to slow the spread of Covid-19. Many schools and churches will be closed for a time. As consumers distance themselves from one another, they are likely to spend less time in restaurants and more time at home. There are a lot of dairy-laden foods – nachos, pizza, cheeseburgers, sauced vegetables, creamy soups, and baskets of bread and butter – that will not be sold in stadiums and at restaurants. School milk programs will be put on hold. But people are still hungry, and there is plenty of dairy available at local markets. Several major grocery chains are preparing for a 50 percent increase in sales of fluid milk, although such a spike is obviously temporary. Yogurt, cheese and frozen foods – including frozen pizza, ice cream and prepared meals – are flying off the shelves. Dairy demand will depend on how long Covid-19 persists and the severity of the economic impact around the globe. The net impact is likely to be negative. But as retail trends show, not every dairy category will suffer a steep loss in consumption; some could even stand to gain.

If dairy-product prices continue to languish, dairy producers are in for a rough few months – a situation that is unfortunately familiar. But it can’t go on forever. Sustained prices like these would almost surely forestall expansion and bring on another wave of selloffs. That will slowly reduce supplies and help markets to find a floor. We wonder how low we can go and how long we can stay there. These are uncertain times.

Like nearly all other markets, the grains retreated this past week. May corn settled at $3.6575 per bushel, about a dime less than the previous Friday. At $8.4875, May soybeans finished 42.5 cents in the red. May soybean meal closed at $299.50, a decrease of $5.60 per ton. New crop futures are similarly inexpensive, with December corn at $3.73 and November beans at $8.645. At those values farmers are likely to plant a lot of corn this year – which suggests that, barring a crop problem, grain could become even cheaper.